Nick Stefanelli has created somewhat of a conundrum for the food savvy people of Washington, D.C. His pre set, $115 tasting menu at Masseria has diners saving up to enjoy the delights of his Italian cuisine. Luckily, he followed the lead of some other chefs—who must not be named—and opened up a trattoria in combination with an artisanal market and cafe. Located at the Wharf, Officina delivers a first world rendition of Roman focaccias as well as Italian gastronomic master pieces.

We trekked to the Wharf to assess the recently launched brunch at Officina. We needed to see first hand if this spot could fill the void of our Masseria fantasies. 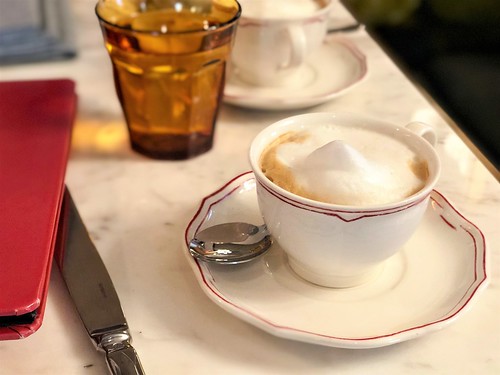 The tall, window-paned building lets waves of light to pour into the restaurant—even on the most grim of Washington mornings. The high tops, soap tiles, beautifully purveyed bar offerings, and hustle-bustle of prosciutto orders from the market may possibly make this the most New York spot in Washington. The bottom floor is open for lighter bites, paninis, cappuccinos, and a browse of the adjacent market.

We were guided up an elegant staircase enclosed by a glass wine cellar. Your first view of the trattoria space is a ritzy lounge with suede and muted retro colors. Another bar just as sexy as the one on the first floor had us wanting to put on flapper outfits and sip drinks out of a coupe glass.

The upstairs seating is plentiful, but not loud or congested. There is no “bad” seat in this restaurant. Our server welcomed us immediately, but allowed us time to settle in and relax. The menu is difficult to understand from a brunch perspective, so I could see how this might deter even the most consistent brunchers. However, our waiter went through the entire menu in detail. He had our mouths watering and didn’t try to oversell us anything the table didn’t need. 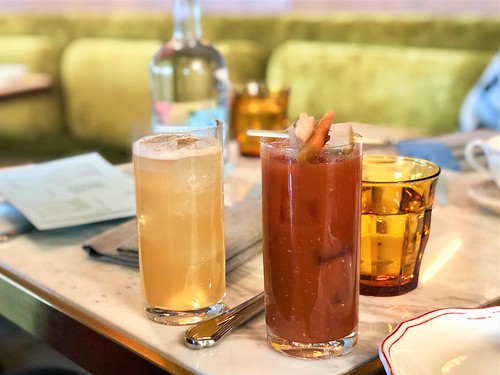 The cocktail menu has an incredible variety, but this is also the place for espressos and cappuccinos. We opted for the coffee beverages all around, plus one traditional Bloody Mary, and a speciality cocktail.

Espressos and cappuccinos were nutty and frothy but didn’t give us the jitters like many trendy coffee spot beverages can.

The Bloody was delicious, but a little too heavy on the ice—which can yield a to a watery separation of alcohol. The spice was a horseradish-style rather than one made with cajun spices or jalapeño. The specialty cocktail we ordered was the Venetian Punch, a cocktail with vodka, spiced dram, punsch (a Swedish liqueur), lime, and ginger beer. This was essentially a mule, but more on the lemonade end rather than the fizzy ginger end. 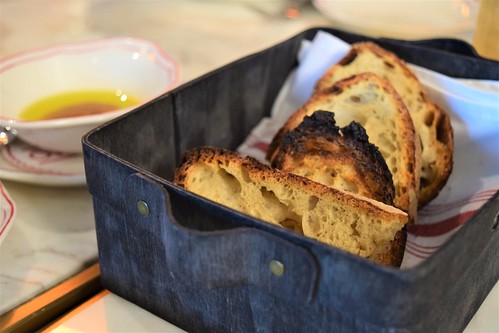 We devoured a perfectly charred basket of sourdough with olive oil and balsamic, a treat not enough Italian restaurants do to this level of quality. We ordered our dishes to share first, which were ricotta pancakes and burrata. The pancakes were phenomenal. We didn’t love how they pre-drizzled the syrup all over the pancake for us, but we could taste the creaminess and acidity beneath the charred exterior of this flapjack. They weren’t the most beautiful pancakes we had ever seen, though that didn’t matter. 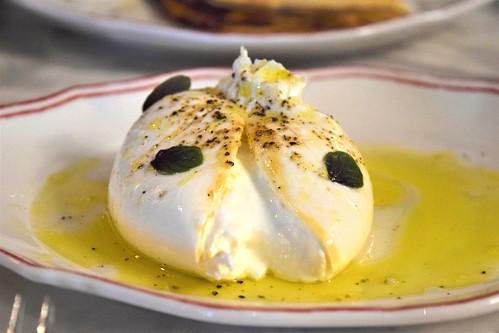 We also shared a burrata, which was one of the most beautiful versions I’ve seen. Glazed with olive oil and herbs, the burrata remained untouched for minutes as we stared at it. Cutting into this sphere of cheese was extremely satisfying. The cheese inside was soft but didn’t become a liquidy mess all over the plate.

To tap into our Italian brunch brains, we ordered paccheri, spaghetti, eggs in purgatory, and a frittata. 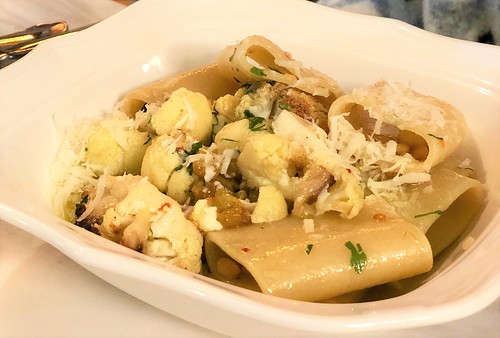 Paccheri is a wide and long tube-shaped pasta without ridges. It was served delicately with butter, golden raisins, and cauliflower. The combination of mouth-coating fats with the sweet chew of raisins was phenomenal. As for the pasta itself, it was a little too al dente. Having pasta with a little bit of toughness is important in real Italian cuisine, but this thick noodle was almost rubbery due its undercooked qualities. 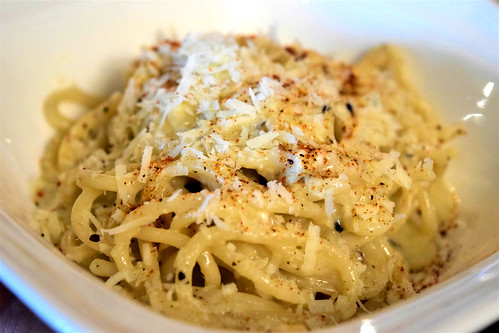 The spaghetti was prepared like a cacio e pepe (an off-menu item you have to ask for), and was cooked perfectly. The pasta was al dente, but had a better mouthfeel than the paccheri. The cacio was salty and creamy, and pepe was spicy and fresh. Cacio e pepe is a staple and not a cop out if you choose it over their other pasta dishes—you have our approval. 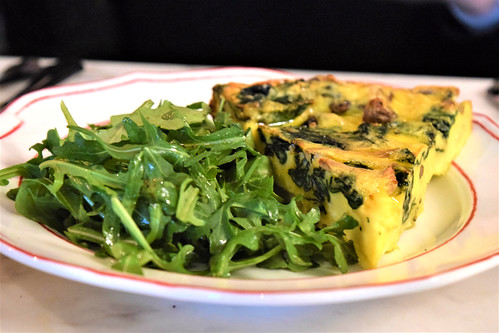 The frittata was baked with spinach and mushrooms. The fillings were tender and added a nice earthiness to this spongy egg triangle. The flavor was nice, but it was below room temperature when it arrived at the table. 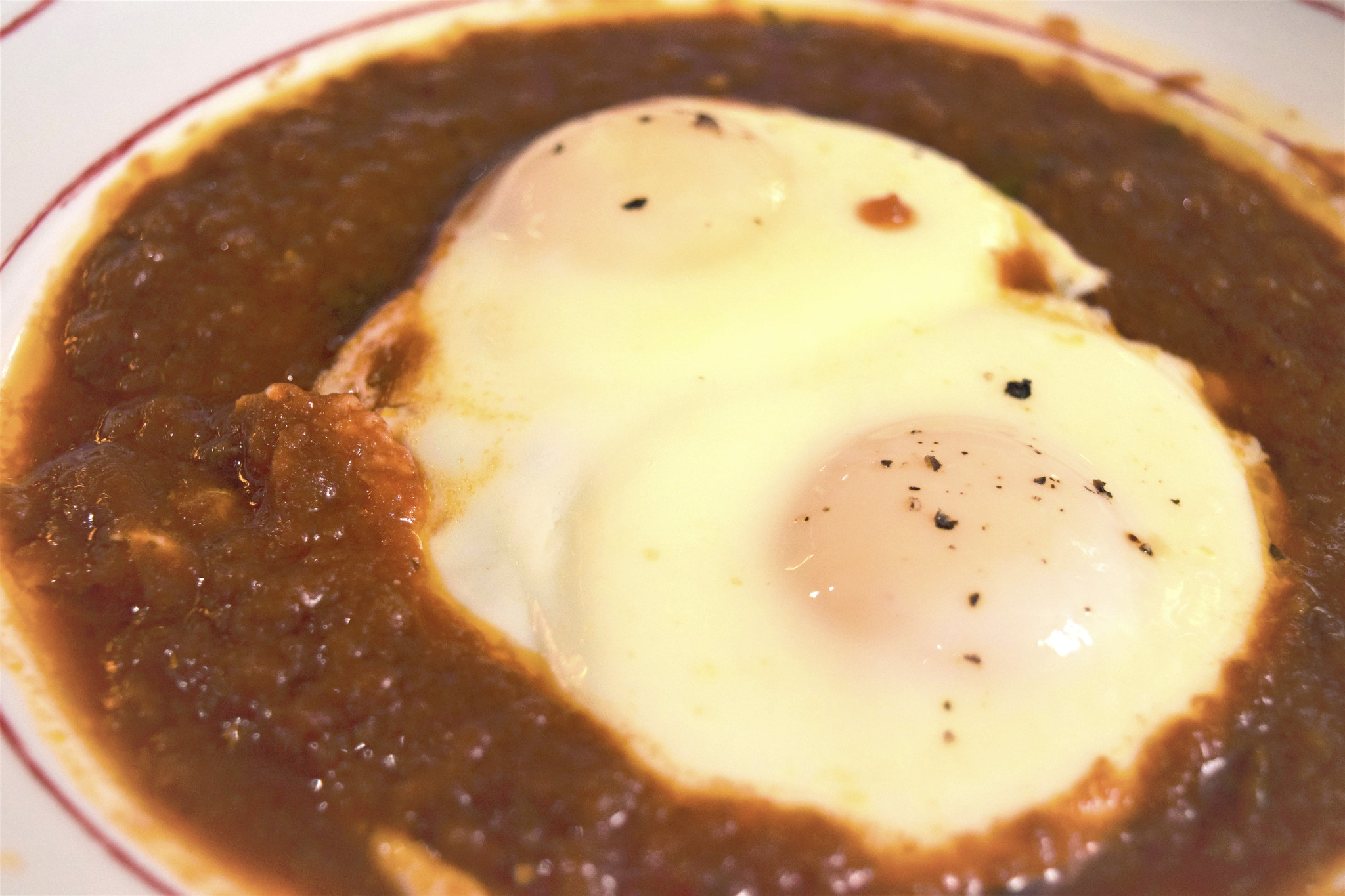 I’m personally a huge fan of eggs in a purgatory. It’s usually prepared and served in a cast iron skillet, so I was surprised when it arrived on a simple table plate. Nonetheless, this dish was delightful. They clearly know how to develop a marinara sauce with a depth of flavor, so the sweet red sauce was very complimentary to a runny egg. These eggs were piping hot, making a quintessential winter breakfast.

The Bitches say: Four-and-a-half Champagne flutes for Officina. There are many more dishes to be had at this restaurant. We didn’t even make a dent in the wine offerings or other entrees, so we will definitely be back. Brunch is solid and it’s a great spot to make a day out of.