Labor Day may have just passed, but I’m hanging on to those last bits of summer. I’m not quite ready to cork the rosé and hang up the white linen pants quite yet. 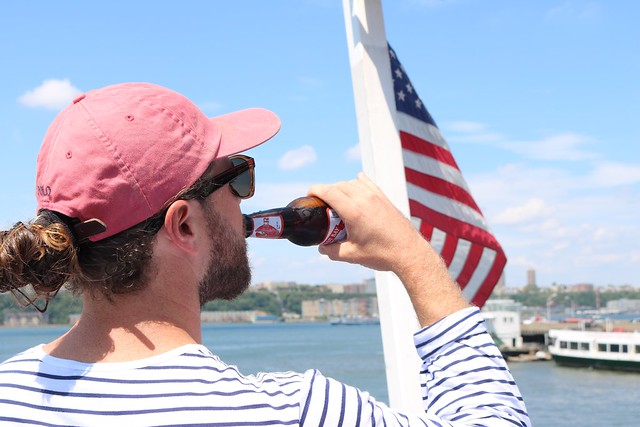 While we still are experience 90-degree afternoons, I highly recommend that you take advantage of the sunshine and cool off on the Manhattan waters. Many of the boats on the Hudson can be touristy and overpriced; avoid them and head straight to North River Lobster Co on Pier 81. 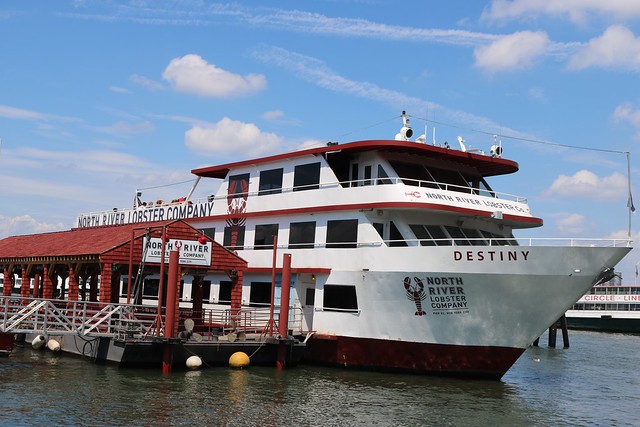 We recently attended the launch party for Fish Bar, North River Lobster Co’s swankier older sister, so I was excited when we were invited in to try some bites and drinks aboard this low key schooner. While Fish Bar treats diners to 90-minute sails around the southern tip of Manhattan, North River Lobster Co takes the road less traveled, heading north up the Hudson on a 45-minute loop. This shorter option is handy for those who are looking for some good food and sea breezes, but don’t want to commit to a longer sail. 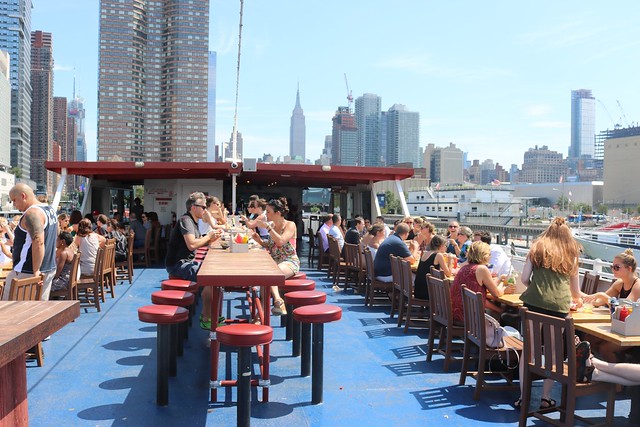 I was joined by my boyfriend Robert and we arrived about 30 minutes prior to departure in order to get a feel for the ship. North River Lobster Co. features three floors of restaurant and bar space with loud, upbeat music, colorful accents, and plenty of seating. We opted for the upper deck to soak in the sun and optimal skyline views. 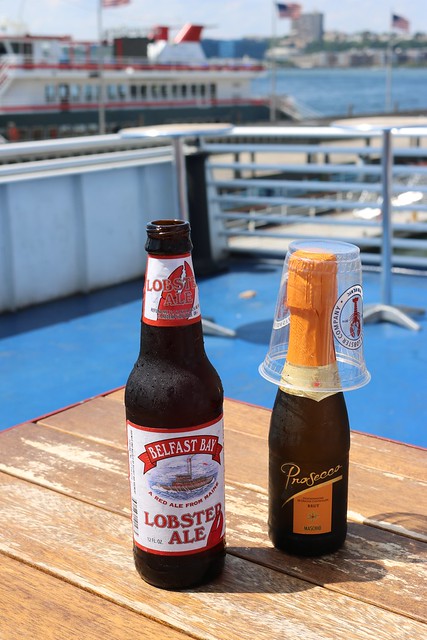 The boat has a complete bar, but I stuck to vino and Robert tried some nautical brews. We figured these beverages were light enough to a catch a summer buzz and would complement the copious amount of seafood that we ordered. Plus once I saw the cute mini Prosecco bottles on board, I was easily sold. 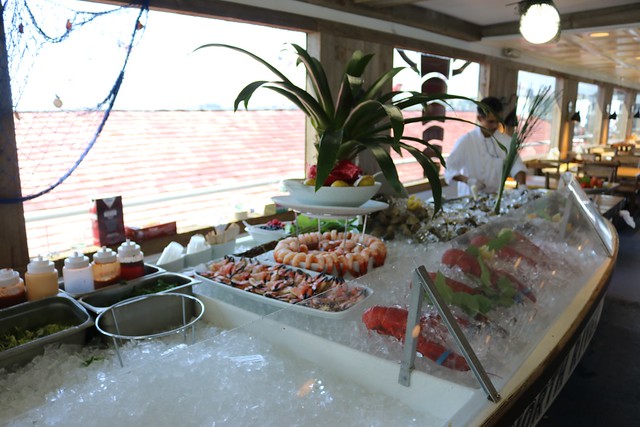 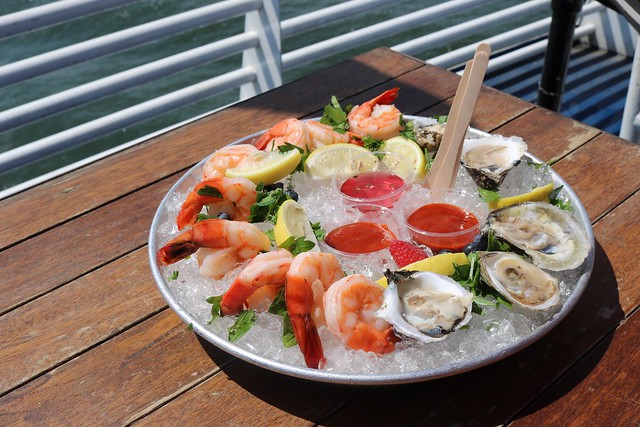 Unsurprisingly, North River Lobster Co offers a wide variety of fresh seafood, complete with a raw bar on the second floor. To start, we split a tray of local East Coast oysters and shrimp cocktail. Our dishes were presented beautifully and looked almost too pretty to eat. The seafood was fresh and bountiful; our meal was off to an excellent start. 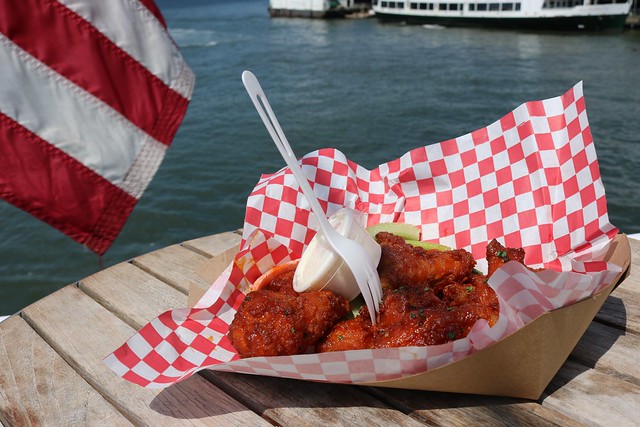 For good measure, we also tried the Buffalo wings and the truffle Parmesan fries, per the friendly bartender’s recommendation. Robert is the wing connoisseur and gave these his stamp of approval. He noted that there was a great meat-to-breading ratio and the sauce was zippy. We also enjoyed nibbling on the fries throughout the meal and were pleased that you could really taste the truffles. But really if you’re getting on board this boat, you should focus on the seafood. 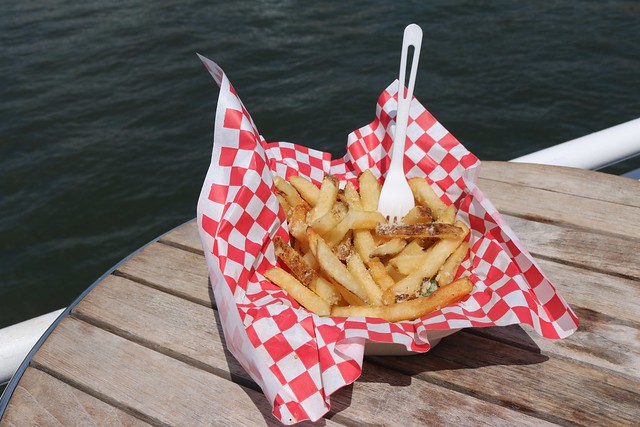 The main event at North River Lobster Co is obviously the lobster. We figured when in Rome we ought to order all of the lobster, so we chowed down on the lobster roll and the Maine Lobster Box. 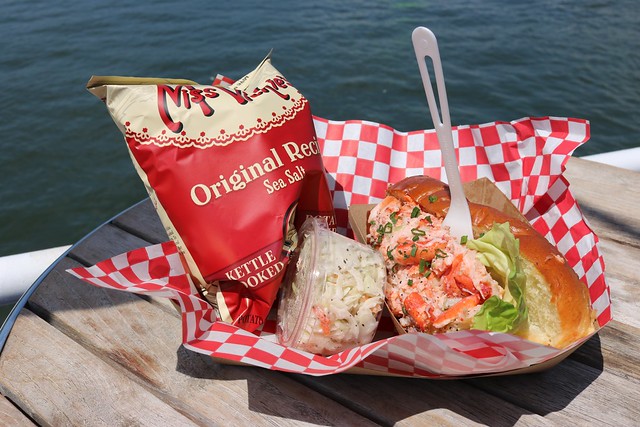 We selected the New England Classic lobster roll, as opposed to the New Yorker, which is served with onion, celery, and whole grain mustard. I’m normally not a huge lobster roll fan, I prefer the crustacean by itself, but I enjoyed this particularly decadent Sammy. They didn’t skimp on the portion of lobster and it wasn’t drowned in the Old Bay mayo. The roll was also flaky and buttery, just how I like it. 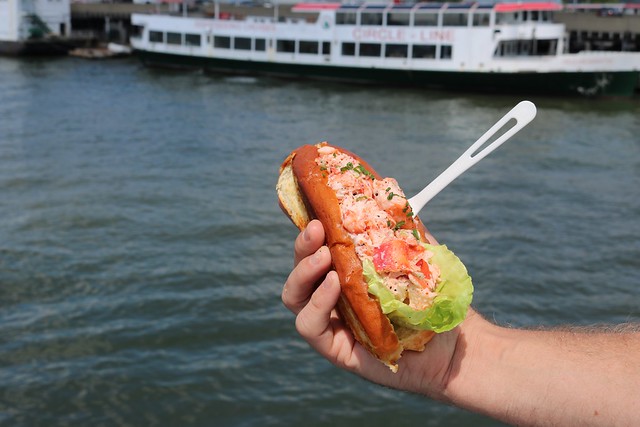 The Maine Lobster Box features a quarter-pound lobster served alongside Long Island sweet corn and potato salad. Out of everything I sampled, the whole lobster was the standout. It was easy to break down, we were able to snag big portions of sweet meat, and the herbed butter was the proverbial icing on the cake. Not to mention, the bright red lobster was easy on the eyes and really made us feel like we were capping off our summer season on a high note. 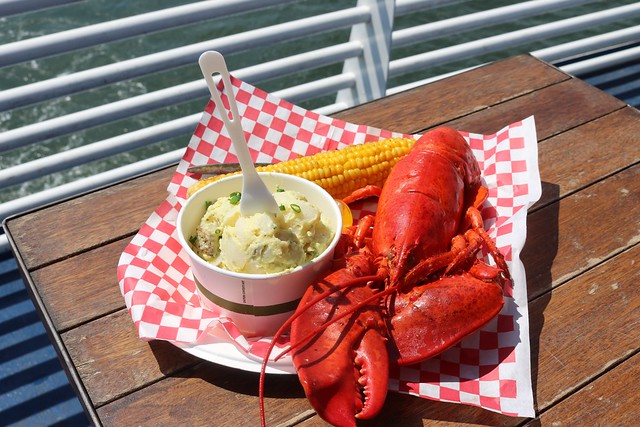 By this point, the ship was approaching the dock and we were filled to the brim with fresh local seafood. Despite the fact that we put an impressive dent in numerous entrees, we still felt light enough to stroll along the West Side Highway to continue our Sunday Funday at the Whitney museum. 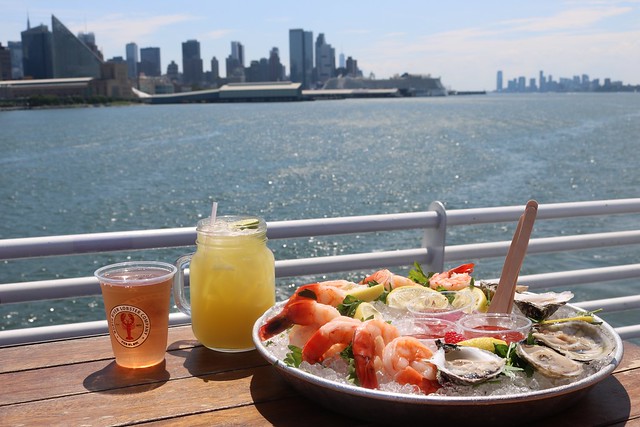 North River Lobster Co is a great option to get outdoors and soak in more of our beautiful city, while avoiding the touristy crowds. There’s plenty of space so it would be a fun venue for a group birthday brunch or happy hour with a view. Grab your seat aboard before the ship docks for the season. Bon voyage! 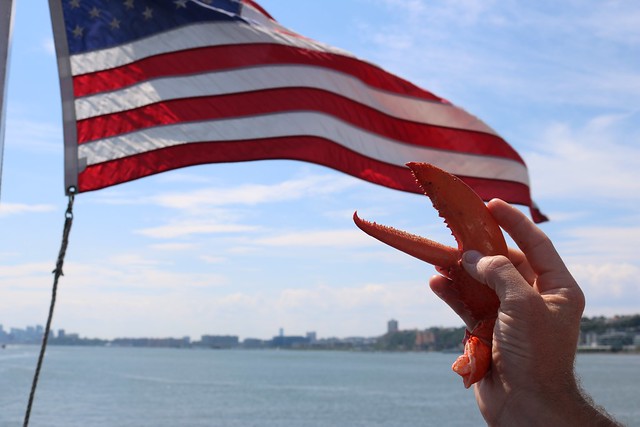 The Bitches say: A. We loved the fresh seafood and brunch with a view. This is a unique dining experience that’s equal parts memorable and fun.