On my very first trip to San Francisco, I had fully planned out a list of restaurants I was dying to try and Nopa was at the top for brunch.

I was meeting two of my friends for brunch at this (North of the) Panhandle spot. It was a gorgeous sunny day as I walked through Alamo Square, watched the cute doggos and admired the Painted Ladies. San Fran was seriously winning me over; all that was left was a solid brunch.

We walked into a packed restaurant, with rustic, earthy vibes and bright sounds of happy diners. The brunch menu changes almost weekly, as the chefs put an emphasis on fresh ingredients sourced from its neighbors in Northern California.

I love the emphasis on eating local, but it makes it hard to scope out the menu ahead of time (as a Bitch is wont to do). So I went in with few preconceived notions of what I wanted to order, save for the advice I had overheard from a guy on the street who mentioned that Nopa has the “best pork chops in the city.” 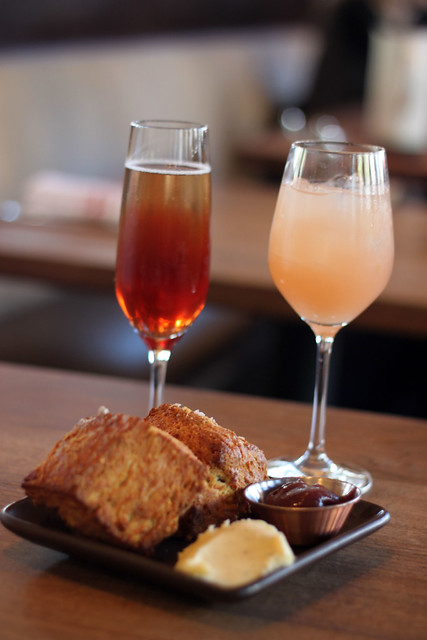 First up, cocktails. We were admittedly a bit hungover from the previous day’s trip to wine country in Sonoma, but two out of three of us were prepared to power through. I was immediately intrigued by The Grapefruit Cocktail, which had hidalgo manzanilla, maraschino, and grapefruit juice. This fruit cocktail hit the spot—although the cherry and apple flavors came through a bit bolder than the grapefruit notes.

We also tried the Red Eye, not a coffee cocktail with an espresso shot, but rather a mix of sparkling wine, cranberry, and NOLA coffee liqueur. It’s coffee-forward but without the caffeine, so don’t expect it to wake you up.

I was eager to try as much of the concise menu as possible, so I decided to try two sharing plates instead of a single entree. First was the black pepper gouda biscuits, with thyme and pink lady apple preserves. The biscuits were savory; the gouda and pepper gave a particularly sharp taste to the pastry. I can’t say that I loved these, but I’m glad we tried them. 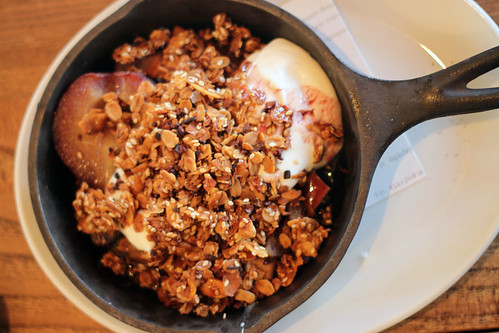 Feeling bold, I also opted for the sesame almond granola. I love a fruit and granola plate as much as the next gal, but most restaurants tend to mail this dish in. Nopa, however, does not. With red wine poached pears served warm under a blanket of whipped yogurt and honey, I was blown away. The pears were perfectly soft, and just melted in your mouth. The dish wasn’t too sweet and the warmth from the skillet just radiated goodness. This was easily the best granola dish I’ve ever tried.

We wavered when choosing the right egg dish, so when our server suggested the butter basted eggs, we went for it. Boy, am I glad we did. With basmati rice, curried broccoli, winter squash, fried shallots, and tahini labneh, this dish was a celebration of Middle Eastern and Indian flavors. The presentation was basic but each bite was more complex. I’m dying to recreate it at home, but I’m sure it won’t live up to Nopa’s version. 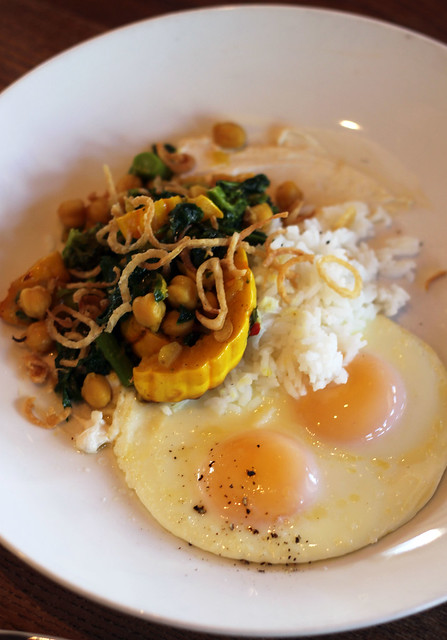 We knew we had to try the brunch burger — a classic. This juicy wood grilled hamburger came with pickled onions, French fries, and pimenton aioli. The aioli was great and all the components held up. 10/10 for Nopa’s version of this brunch staple.

Despite being completely full, we couldn’t leave without trying the French toast. I’m told the toast rotates regularly. On this particular Sunday, it was a custard French toast with candied cara cara orange and poppy seed butter. The toast was incredible dense, thick with custard, as if it had been soaked overnight. People with a brunch sweet tooth would likely love it, but it was much too saccharine for me.

The staff was quite kind and helpful, though service was a bit slow, given that the restaurant was packed to capacity. Still, they were gracious and attentive to detail. Eventually we rolled ourselves out of the restaurant and into the California sunshine for a day of exploring the city. 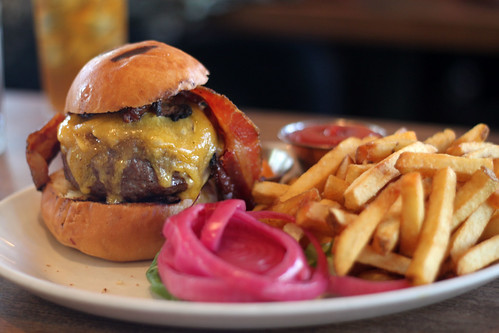 The Bitches say: five Champagne flutes. Nopa’s reputation lives up to the hype. Find fresh ingredients used in inventive ways for a pleasantly surprising brunch. We’d go back and back again as the menu changes to see what the chefs come up with next.