We’ve been hearing about farm-to-table for many years now, but what does it really mean? Farm to table is when a restaurant emphasizes locally grown produce or curated goods and try to eliminate intermediaries. Some of the best D.C. restaurants have jumped on this bandwagon, allowing them to provide higher quality goods with financial and environmental benefits. Nina May, a restaurant that’s taken on the somewhat unlucky space on the corner of O st. and 11th st. (where the late Frenchy’s and The Bird used to reside), is using ingredients that come from just a stone’s throw away.

The atmosphere is serene and filled with light, even on a gloomy day. It’s a spot where we can’t decide if we want to curl up with a cup of coffee or perk up with a zippy cocktail. Indecisiveness has never stopped us before. Why not both? The cocktails at Nina May follow the same seasonal approach as the food: accessible, local, and thoughtful. The classic brunch mimosa has a winter pear purée and the gin cocktail blends in earthy, beet juice. Both had vibrant flavors that were smooth to sip.

The menu isn’t massive, but deciding between incredible combinations that tap into every winter craving was a serious feat. To start, we ordered the pancakes, tater tots, quiche, and focaccia. 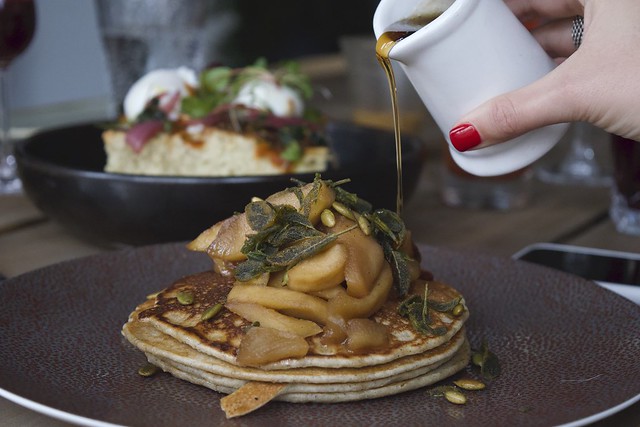 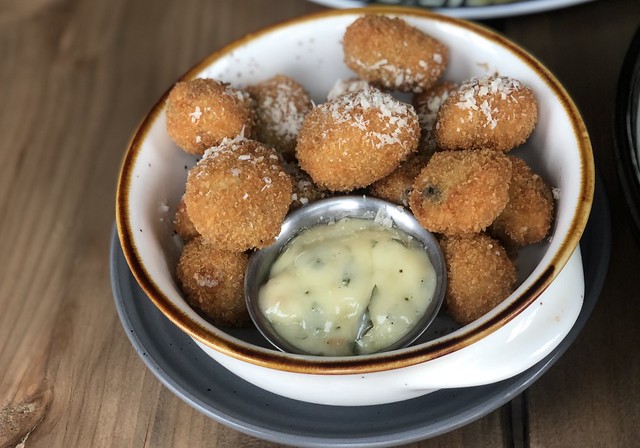 The tots were crispy fried potato with a creamy, garlicky aioli. While this combination is a Southern fried dream, they were more like fritters or hushpuppies than crispy tater tots, and they didn’t pack much flavor. We missed some salt, pepper, and acid.

The quiche had a crust too thick for enjoyment and an egg mixture that was overcooked and under creamy. We wanted that melt-in-your-mouth buttery egg situation.

I’m a sucker for focaccia. This focaccia had a sweet flavor and fluffy chew, maybe too fluffy. Its stature made it a bit hard to eat. The thick-cut slice of bread was topped with a tomato sauce, herbs, eggs, and pickled onions. I would have loved to see this thicker bread sliced longways and eaten sandwich-style because it became rather difficult to approach this tower of dough; the formation begged for a saucy bath for the bread to absorb. 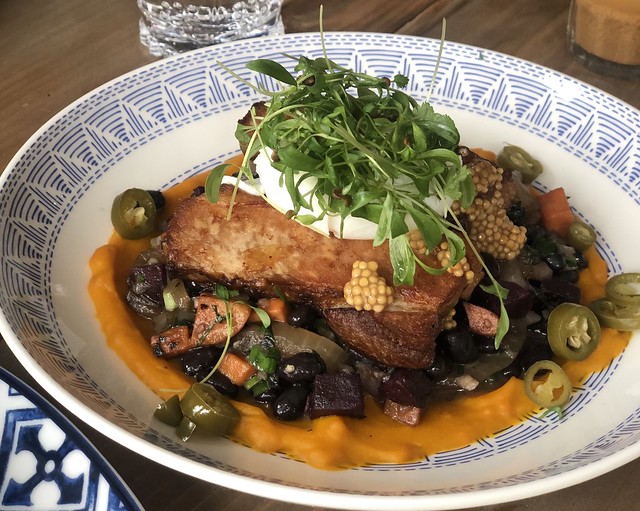 For our mains, we added the pork belly hash, fried oysters, and fried chicken sandwich. The pork belly hash was our favorite thing on the table by far. The perfectly crispy, lean pork rested on top of roasted veggies, squash purée, and dollops of tangy, hydrated mustard seeds. The aromatics, well-cooked earthy ingredients, and billowy protein made for the ultimate entrée.

We always try (and so should you) to opt for a recommendation by our server. When he suggested the fried oysters, we were hesitant to begin the day with such an acquired flavor profile. We went for it, and we were glad we did. The breaded and juicy, saline brine offered rich natural flavor supported by brothy rice, bok choy, a poached egg, and basil buds. This dish is one to be celebrated at any Nina May brunch party: it’s a well-composed melting pot of Mid-Atlantic flavors. 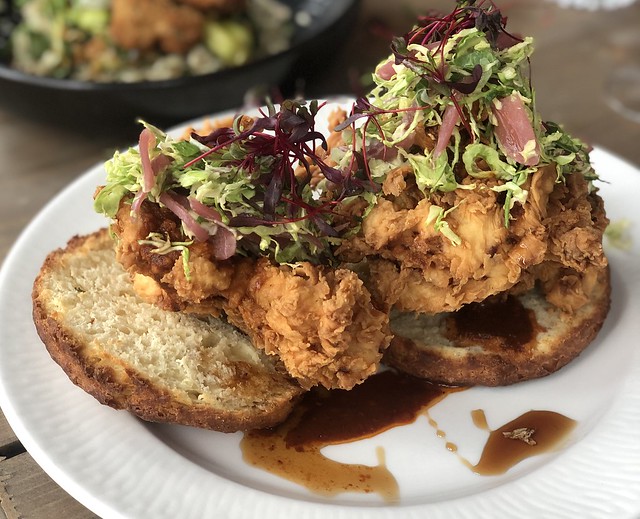 D.C. puts its best foot forward to capture the essence of Southern comfort foods. The fried chicken sandwich is a solid rendition of the Southern classic, served on a massive, fluffy biscuit. This dish is definitely splittable – with a heaping serving of moist chicken. We must, however, add this disclaimer: the coating didn’t have that peppery, smokey crunch and heat that you might expect from a typical Southern fried chicken sandwich. But the biscuit was delicious, and we found ourselves attacking this dish with a tear-and-swipe technique rather than an elbows-out, big-bite approach.

Nina May is a great brunch spot for a group. It’s calm, refreshing, and seasonal.