I was having quite the unusual start to my day. After a wild night of antics, I was more than just a little sleep-deprived and dehydrated. I quickly pulled myself together, sent Annie my apologies via text for running late, and pleaded with her to order coffee on my behalf.

I finally arrived at Mythology, located in the Atlas District, and saw sweet Annie sipping her cocktail. She was eager to hear my story, considering we began our nights together. I owe her one for having a cup of coffee waiting for me. 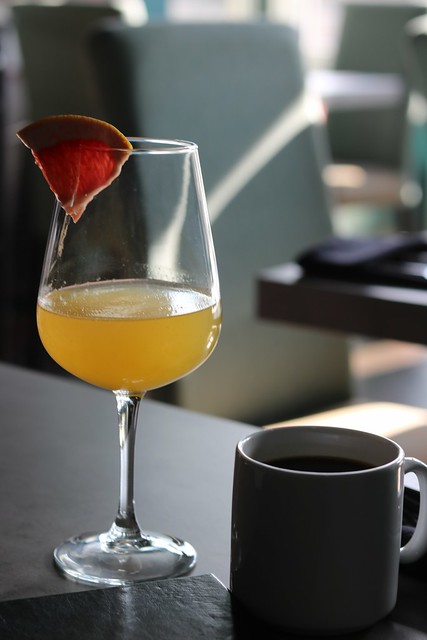 Annie and I were both in the mood for bubbly. Prosecco cocktails are available for $8 per glass or $25 per bottle at Mythology. Annie tried the Pamona, which was made with peach puree and ginger beer. It was light and fizzy. She really enjoyed it.

I decided to give the Ceres cocktail a chance, as I was enticed by the description of lavender syrup steeped in cardamom and clove. However, this cocktail was appealing at first blush, but was a bit of a letdown in taste. 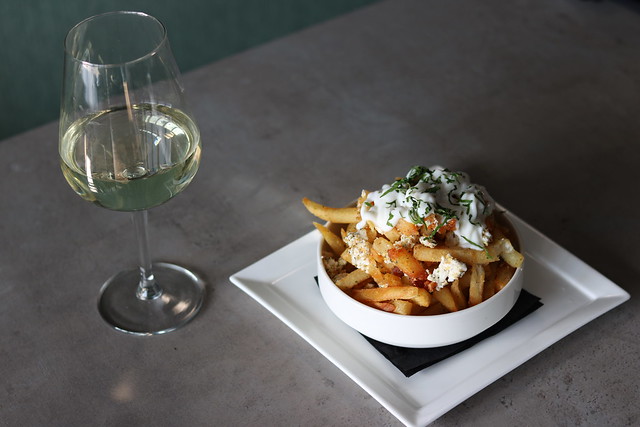 My coffee was cooling, and I needed milk for it. I asked for milk several times before finally receiving it. It seemed the service was attentive when Annie had first arrived, but became less present as the restaurant filled up. We were invited to check out the restaurant, so this brunch was on them.

Let’s talk about the decor. You enter to a wall with the word “Mythology” written in multiple languages, and matching teal booths. Then, there are bright, illuminated neon clouds suspended from the ceiling that change colors. I wasn’t quite sure if I was in a restaurant, if this was a joke, or if I was tripping on acid. The space lacked refinement and direction—and, to put it bluntly, any element of taste in its decor. 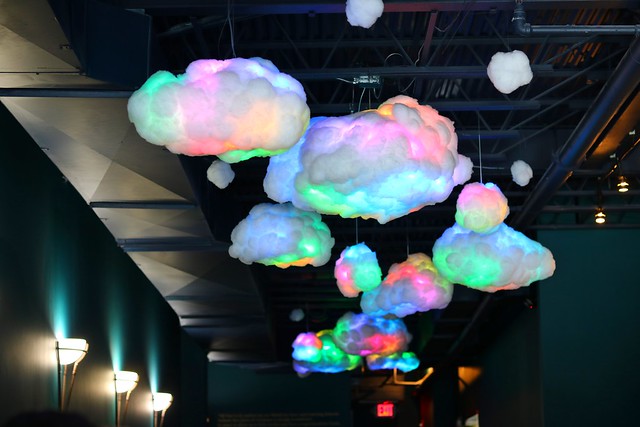 The menu at Mythology is inspired by ancient mythology and incorporates flavors from a number of continents and countries. As we skimmed the menu, we made note that Mythology boasts an impressive selection of frites with 12 different variations, dusted or smothered with sauce.

The Feta frites called our name. These delicious delights were dusted with yogurt and garnished with gremolata. We had to stop ourselves and save room for our entrees—a decision that proved to be a mistake. 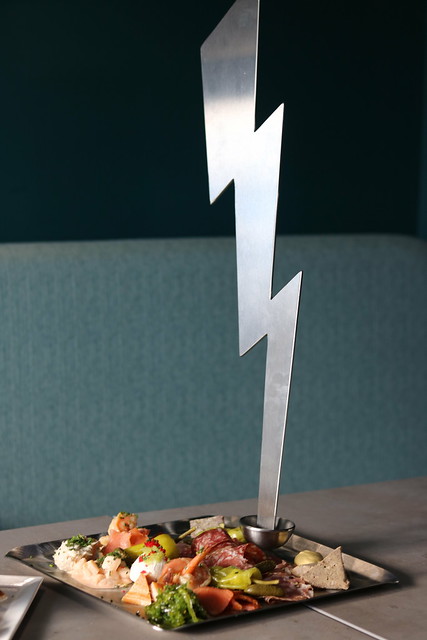 Our jaws dropped as Annie’s surf and turf board arrived adorned with an enormous metal Zeus’s thunderbolt. Not only was it much grander than we had anticipated, but it seemed to include nearly everything found on land and sea. Between a selection of carbs, scallops, shrimp, and seaweed salad, Annie was utterly overwhelmed by the presentation but underwhelmed by the taste. The charcuterie was rather bland, and the fish salads tasted like they were past far their expiration date. They definitely went for quantity and presentation over quality here. 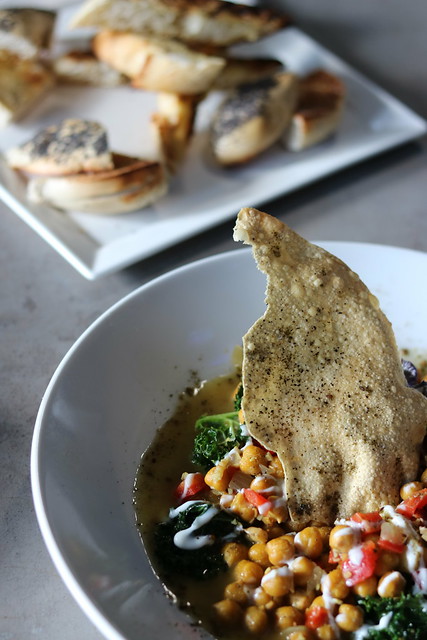 As a vegetarian, I had to order the dish appropriately titled “But, I’m a vegetarian.” A beautiful portion of curried chickpeas arrived with stewed eggplant and kale in a yogurt sauce, topped with crispy papad. As a devout consumer of chana masala, I was deeply disappointed my the dish, as it lacked flavor. It was mostly watery chickpeas slosh, and not ragout.

Last but not least, we rounded out our brunch with monkey bread. The dish comprised bite-sized chocolate and pumpkin-spiced pieces of dough dipped into vanilla cream. This sweet dish was just what we needed to get the terrible tastes of the entrees out of our mouths. 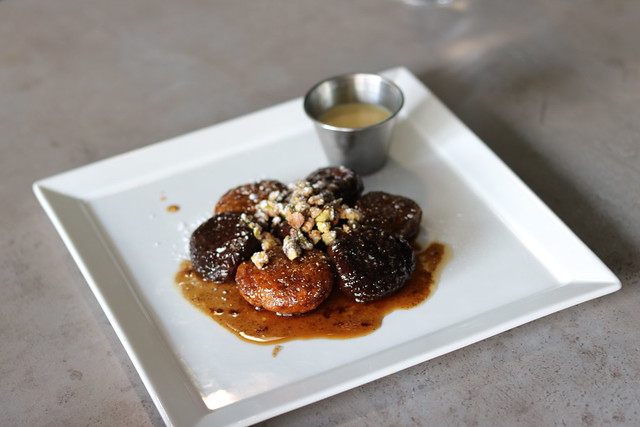 We’re always weary when we see a menu offering items from nearly every major cuisine. Much like in life, you can’t be everything to everyone. And, as I tell my PR clients in my day job, if you’re trying to say too much, you’re not really saying anything at all.

While we can appreciate a good theme, Mythology reeked of an identity crisis. The offensively striking plating, the expansive and incongruous menu, and the subpar quality made the meal a letdown. Plus, the increasing amount of time it took to get our server’s attention between courses puts the service at a low.

The Bitches Say: D.We might go back for the selection of frites, but we can get good French fries in a less odd ambiance with better service elsewhere.