As a Virginia native living in Chicago, not being able to go home for holidays can be difficult. Thankfully, I have lots of friends in Chicago who are as dear to me as family, and I get the chance to spend holidays with them, too.

On Easter Sunday, my friends Citlali and Sean had no plans for Easter, so I suggested we get together for brunch.

The three of us set up a late brunch date, and decided to go somewhere near where Sean and I live, since Citlali was driving in from the suburbs. 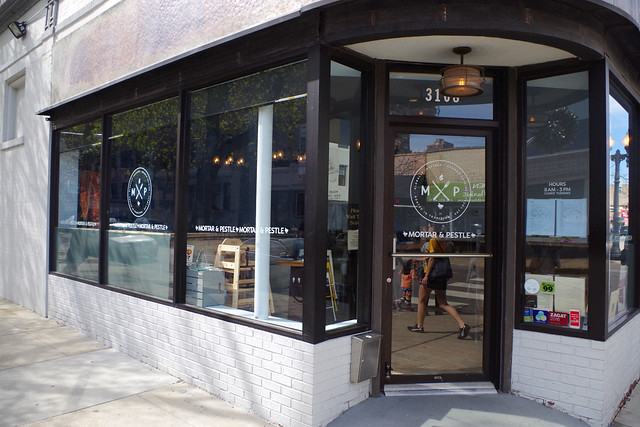 I had Googled and searched for a spot we haven’t reviewed yet, and ended up discovering Mortar & Pestle. Mortar & Pestle is a modern American breakfast and brunch spot in Lakeview that closes at 3 p.m. every day. This meant that our late brunch date needed to start on time if we were hoping to eat there.

Citlali and I arrived a bit before Sean, so she and I ventured inside to scope out the scene. Mortar & Pestle is much smaller than I anticipated, and bustling with people. We were faced with a 30 minute wait. I was concerned we would be turned away completely, and was happy to take the 30 minute wait time instead.

Sean arrived soon after we put our name in, and when we went into check and see if the wait had lessened, we were escorted to a table near the front of the restaurant. 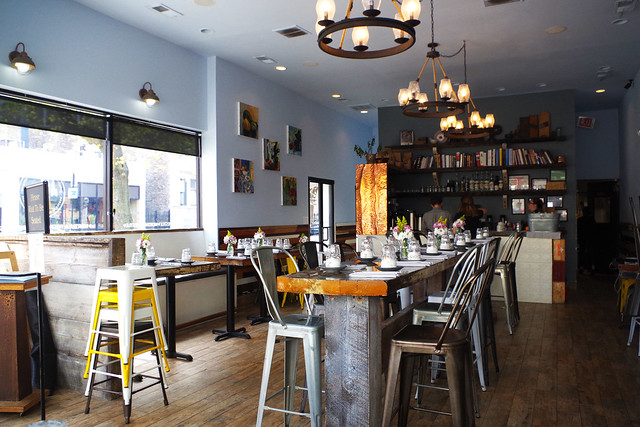 After sitting for a moment, I had a chance to really take in Mortar and Pestle, and notice all the details. It is a tiny, quaint, and rustic spot with few tables and one large communal table in the center of the restaurant. I loved the small details—vases with flowers on every table, the metallic surfaces, large rustic tables, and metal stools. 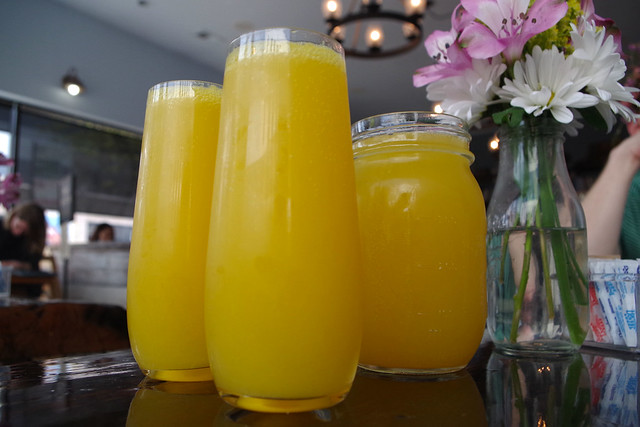 To start, the three of us ordered cocktails. Mimosas for Citlali and me, and a beermosa for Sean. The mimosas were perfect—crisp, fresh, and more champagne than juice. Sean enjoyed his mimosa a lot, and I took his word for it—maybe you’ll remember, I’m not much of a beer girl. 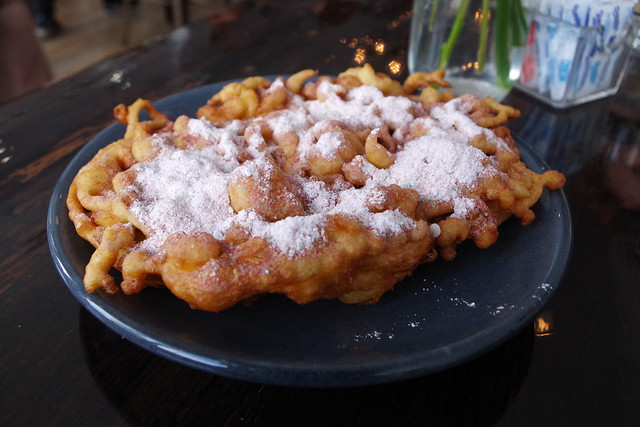 To keep our tummies from rumbling too much, we decided to nosh on the funnel cake before our entrees. The funnel cake came topped with Fruit Loop cereal dust, instead of the traditional powdered sugar you’d expect. 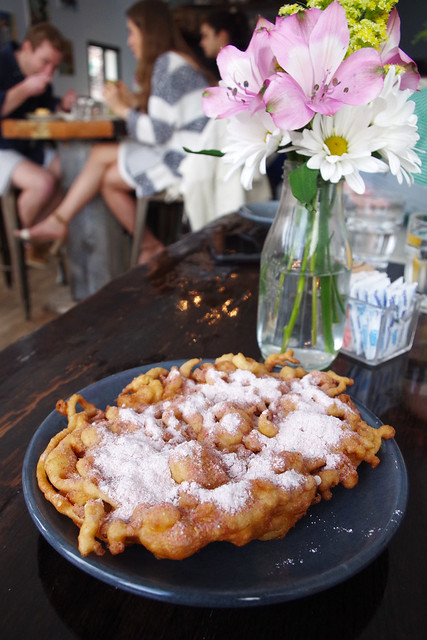 Now, one may think this sounds childish, and admittedly the last time I had Fruit Loops I was in elementary school, but this addition was cute, unique, and sugary. Citlali and I demolished the appetizer. We kept telling Sean to stake his claim on the funnel cake, but I think he held back because he saw how much we liked it. 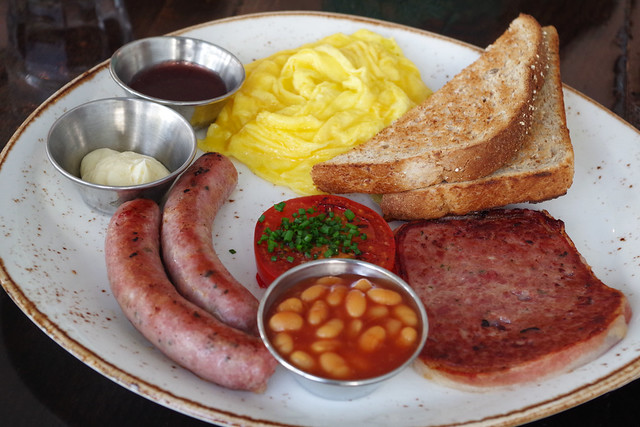 Next up were our entrees, and Sean ordered the Irish breakfast with ham, scrambled eggs, sausage, beans, and toast. It was a traditional breakfast that was protein heavy, which was exactly what Sean was craving. He ate all of the parts of the breakfast, and said he would order it again, but after eyeing what Citlali and I got for entrees, he’d want to try more of the menu. 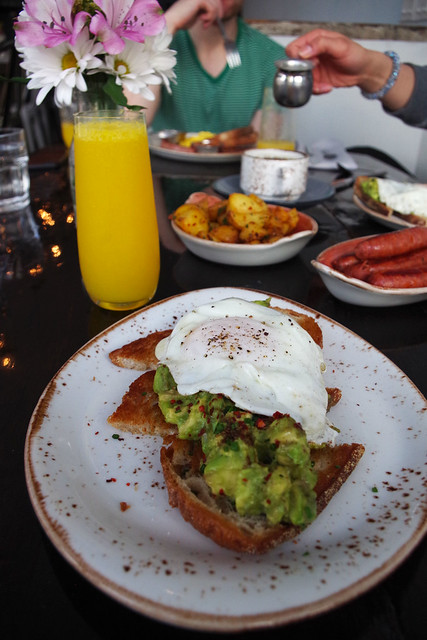 Both Citlali and I ordered the avocado toast with a fried egg on top. The bread was freshly baked French bread topped with avocado and a fried egg. The avocado had a variety of spices on it, the most noticeable was the red pepper flakes. It added a nice heat to the dish, and I consumed every bit of the toast. The eggs were perfectly cooked, and the yolk mixed nicely with the avocado. 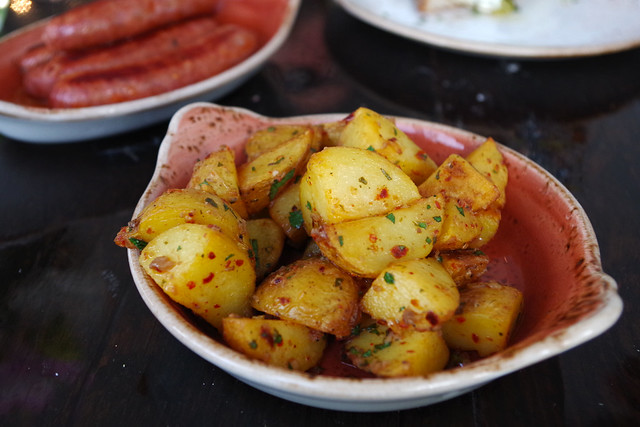 On the side, Citlali ordered potatoes and sausage for the table. The potatoes were perfectly cooked, and had more red chili pepper flakes, similar to the other dishes we were trying. Having the pepper flakes be a common thread throughout the meal made me inclined to enjoy Mortar & Pestle all the more. Those kinds of details are what I enjoy about restaurants, especially as someone who enjoys a little heat to their meal. 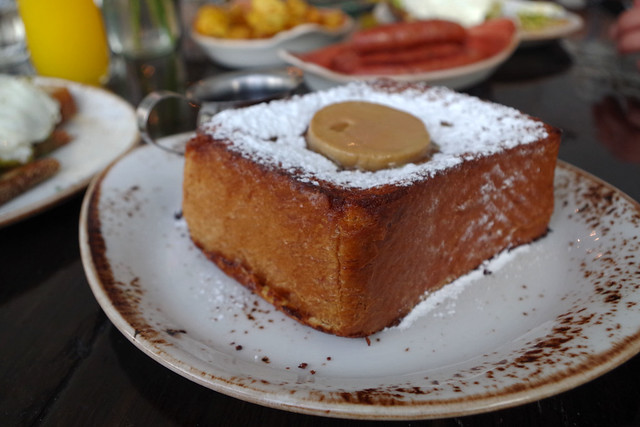 Along with the avocado toast, I had a hankering for something sweet. We had had the funnel cake, and that should’ve assuaged my sweet craving, but I caved when I read the description of the French toast. I ordered the French toast to share, but admittedly, I ate most of it. 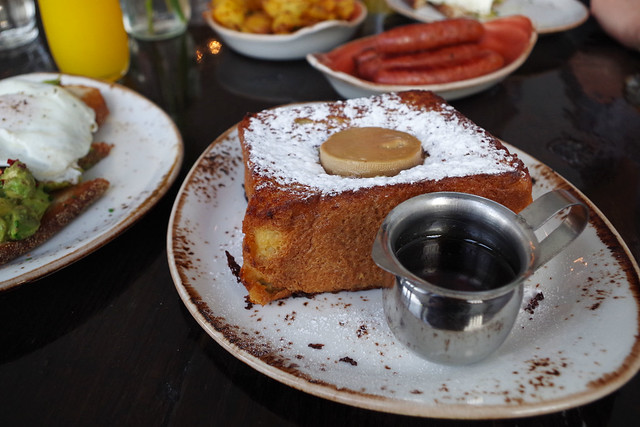 Holy moly. This French toast, with its brioche bread, took French toast to a whole new level. It is more the size of a loaf of bread, not a slice, per se. I don’t know how Mortar & Pestle did it, but it was crispy on the outside, and warm and gooey on the inside. To keep it simple, the dish was topped with brown sugar butter, and powdered sugar. Perhaps one of the best brunch dishes, and renditions of French toast, that I have ever had. Bravo, Mortar & Pestle! 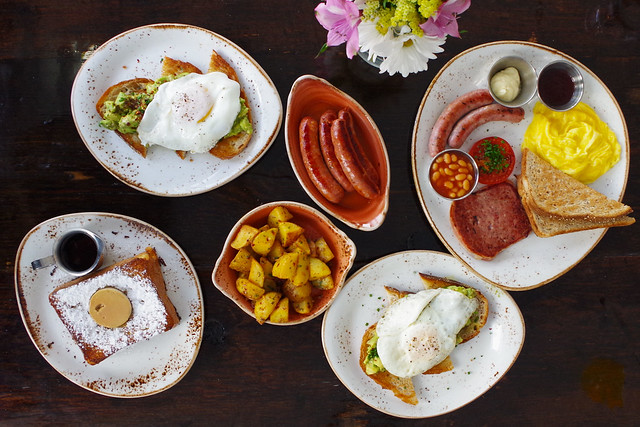 Mortar and Pestle wowed me for brunch. While this brunch was a bit haphazardly planned, and we were faced with a wait, the food was delicious, unique, and satisfying in every single way. Everyone in Chicago should make time to try Mortar & Pestle.

The Bitches say: A. Mortar and Pestle needs to be on everyone’s brunch agenda. One look at the French toast and we promise you will want to try it.