After searching for eight years, Middle Brow Beer Co. has finally found a home. In January, the company opened Bungalow Brewpub in Logan Square. They cut their teeth making beer under contract for breweries around Chicago, but now the company has its own brewery/bakery/pizzeria. 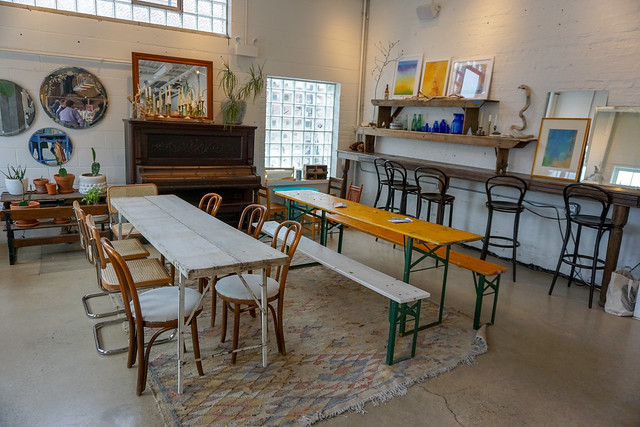 With floor to ceiling windows and skylights, it is a bright and sunny restaurant. The open kitchen allows customers to watch the pizzas being fired and the entire restaurant smells like warm bread. It’s a great place to start your weekend.

The space has long farm tables that can accomodate large groups or serve as communal seating. The Saturday crowd is a mix of friends catching up, people working on laptops, and families with kids.

The menu is simple: your options are limited to beer, toast, and pizza. As a carb-o-saurus, this is my dream scenario. 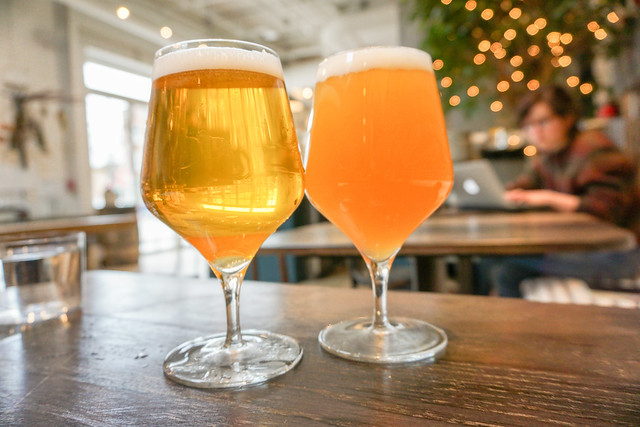 To begin, I ordered the Sabro Crush, a session IPA with a flavor profile of “cotton candy and grass clippings.” It is light enough for a late morning beer and isn’t too hoppy. My boyfriend, Cam, ordered the Robyn, a saison and Middlebrow’s first flagship. It tastes like a hefeweizen, with tasting notes of banana and bubblegum. It was too sweet for his taste, so we swapped and were both happier for it. 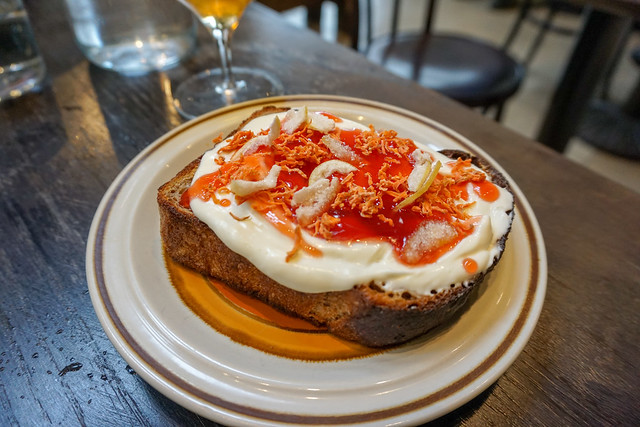 We decided to share the prickly pear jelly and ricotta  spread on country toast as an appetizer. This is not your usual morning bread and butter; it’s an elevated dish that can stand on its own. The whipped ricotta provided a sweet compliment to the more exotic, tart prickly pear jelly. What really stood out was the bread, with its hard crust and soft core. It was fresh and warm. We immediately made plans to take a loaf home with us. 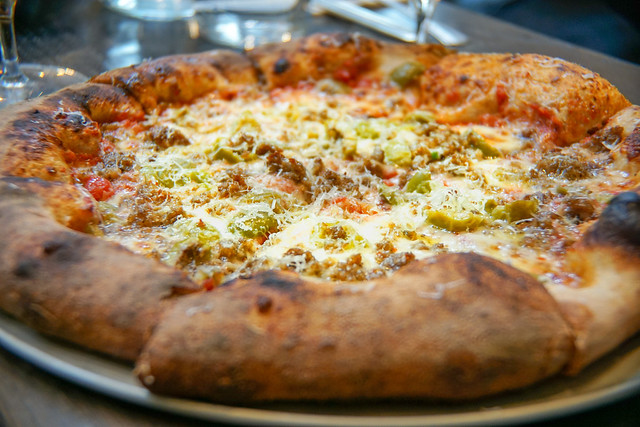 We opted for the sausage pizza with green olives and mozzarella. The pizza crust was phenomenal. It had billowing air pockets but still managed to be chewy and crunchy. The sauce had a complex flavor of tomatoes and garlic that we were both fans of. The pizza is plenty big to share and we ended up taking leftovers home, which made for a great afternoon snack – even cold!

After our meal, we spoke with our waitress about the bread for sale and selected a rye loaf at her recommendation. It is favored for its flavor, moisture, and longevity. We carried it home and spent the week finding new things to put on toast. If you visit, make sure to take home a loaf. Next time, I have my eye on the cinnamon raisin loaf.

The Bitches say: four Champagne flutes. While the menu choices are simple, Middle Brow Bungalow has mastered elevating staples like bread, beer, and pizza into a brunch-worthy meal – with great leftovers!