There are certain restaurants in the city that attract diners from both their immediate environs and beyond a walkable distance. Obviously the marquis Michelin-starred eating houses fit this bill, but there are many laid-back neighborhood spots with an upscale feel that do as well. Mermaid Inn makes a splash for this very reason.

I live in Harlem now, but every so often I find myself heading down to the Upper West Side to Mermaid Inn to meet friends for happy hour or meet my mom for dinner when she’s in town. It’s one of the first restaurants I went to when I moved to into an apartment on the Upper West Side years ago, and I’ve stopped in to toast my birthday over glasses of rosé there a few times over the years as well. It’s safe to say Mermaid Inn is kind of a staple in my life—and the consistent crowds indicate neighborhood feels the same way.

When I saw on Instagram that the Upper West Side location of Mermaid Inn (there are two other locations—East Village and Greenwich Village) launched a new brunch menu, I knew I had to try it ASAP. So I was extra excited when the restaurant invited us in and scheduled a brunch date this past Saturday with my two friends Christine and Leia.

We were seated in the hostess’s favorite table: a four-top on the cusp of the outdoor sidewalk but still safely covered by the restaurant’s ceiling to protect us from the sun. With views of the street and the dining room, it’s a great place to people watch (aka stalk everyone else’s plates of food). 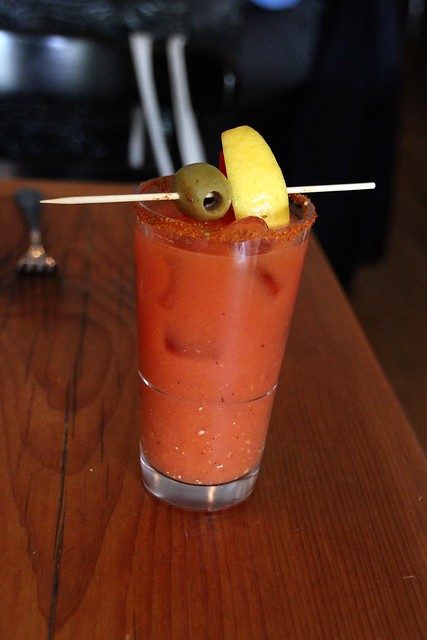 I’m on a mission to find the perfect Bloody Mary, so I started with a Mermaid Mary, a mixture of Tito’s vodka and Old Bay–spiced Mary mix. This rendition was light and drinkable with a hint of spice and avoided the extra-savory misstep some versions sink into. Since Mermaid Inn is known for its seafood, I would have loved to have seen a fun oyster or shrimp garnish to spice things up, but the go-to lemon-and-olive combo held its own. 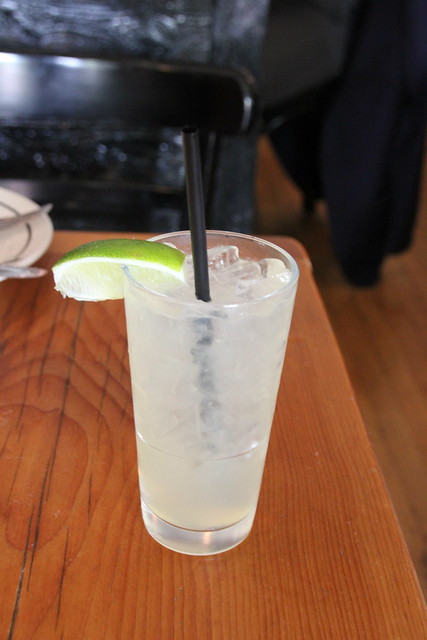 Christine went for the Fresh Cut with Greenhook gin, lemon, lime, soda, and a housemade lavender syrup. She loved the drink for its fresh taste—not too tart and not too sweet. Mermaid Inn even made a special batch of lavender syrup just for her (it had run out the previous evening). Customer service that goes the extra mile is always appreciated. 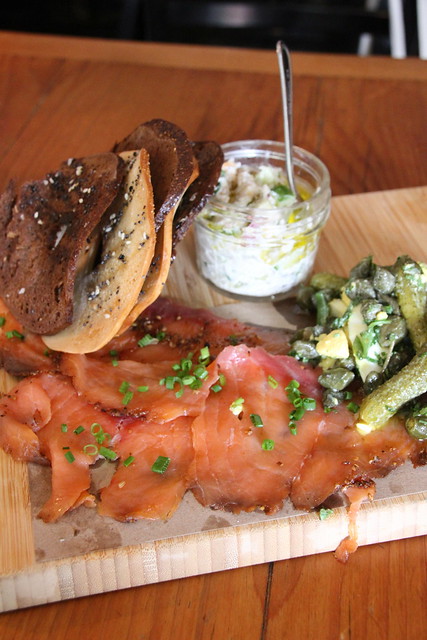 I’d seen the UWS Smoked fish board on Instagram and knew we had to order it. The plate filled with smoked trout salad, spiced cured salmon, bagel chips, capers, red onion, cornichons, and egg salad was my favorite part of the meal and a great starter to share with the table. The waitstaff tried to take it away when our entrees arrived, but I insisted it stay so I could finish eating the smoked salmon. 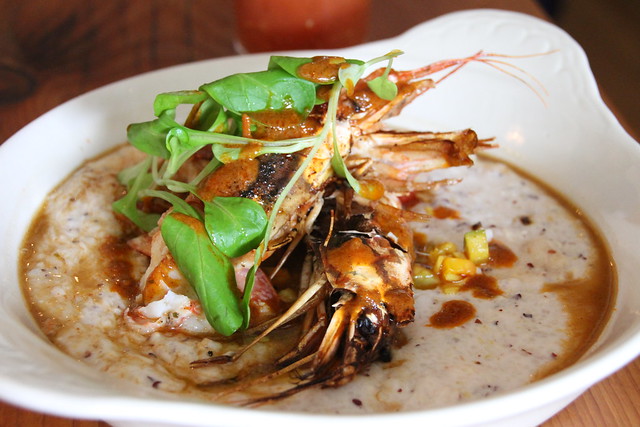 Leia spotted shrimp and grits at the table next to us, and we immediately had to have one too and added it to our order as an entree. Head-on shrimp lay atop stone ground grits mixed with corn relish and pimento vinaigrette. The shrimp were tender, and the grits were creamy and incredibly flavorful. This is a must-order if you’re a fan of the dish. Leia confessed it was the best she’s had lately!

I considered going for one of the carb-heavy dishes on the menu that sounded really brunch-appropriate and indulgent—challah French toast and Greek yogurt pancakes—but I ultimately went with what seemed like a healthier choice, the BLT salad. 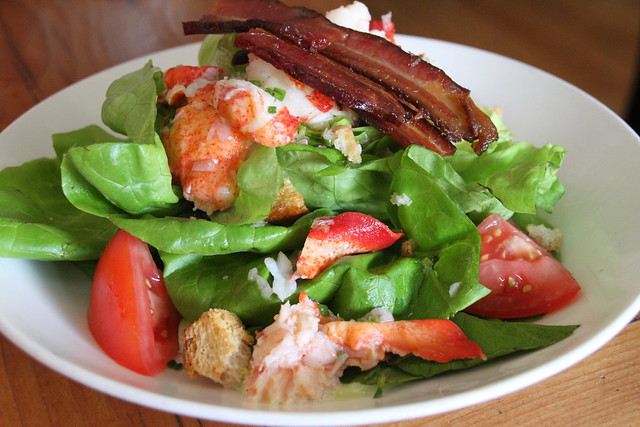 Served upturned on a plate, a head of Boston bibb lettuce blossomed like a plump little peony topped with Maine lobster chunks, salty Nueske’s bacon slices, and large chunks of tomatoes; a fragrant basil aioli spread out underneath it all on the plate. The salad was delicious, but I’d definitely suggest adding extra protein so it remains a filling and tasty option (the other meat option on the menu is crab). 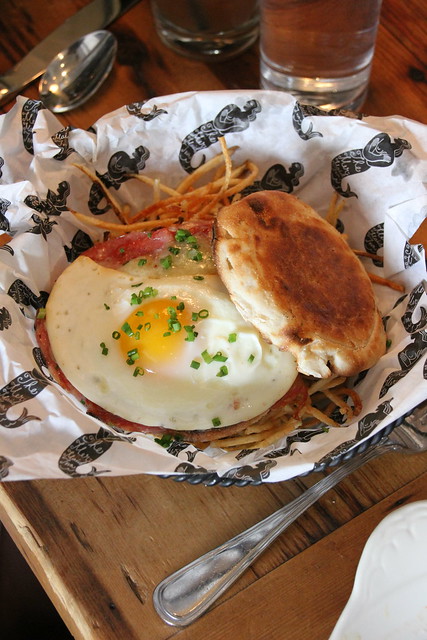 Christine’s ham and egg sandwich combined spiced coppa, aged cheddar, and a fried egg on an English muffin with a basket full of matchstick potatoes. Three words for this sandwich: salty, savory, and tasty. She took the leftovers home for her fiancé because no good sandwich should ever go to waste. 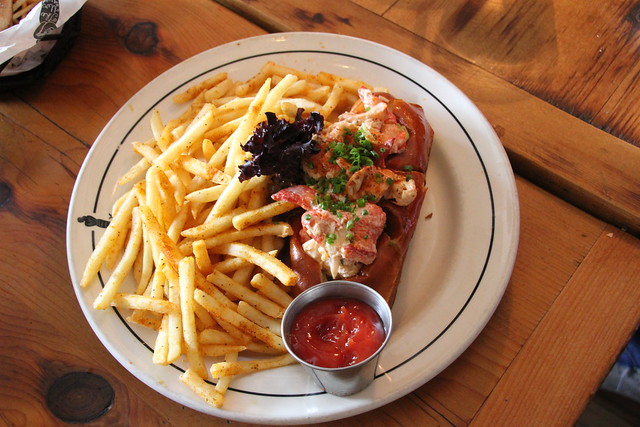 Finally, Leia ordered the “Nearly Famous” lobster roll—hunks of lobster salad on a griddled brioche bun with a plate overflowing with Old Bay fries. She ended up adding some extra seasoning, but at the end of the meal, not a lobster bite was left in sight. We tried our best with the fries, which were delicious, but couldn’t tackle all of them.

All in all, we loved every bite of the meal, from the bread and strawberry butter (it tastes like strawberry ice cream) to the last bites of our entrees.

The Bitches say: A. For its delicious brunch options ranging from classic options like French toast to seafood delights like the UWS smoked fish board, great customer service, and a laid-back but upscale atmosphere, Mermaid Inn is a great option in the Upper West Side for brunch dates, big groups, and families alike. Just make sure to get a res—it gets pretty crowded in there.