Jackie and I found the perfect excuse to pause our hectic holiday schedules when we were invited to check out brunch at Mercat de la Planxa. Mercat is a Catalonian restaurant located in the Blackstone Hotel, just across the street from Grant Park in the South Loop. To get to the restaurant you must enter through the hotel, which was beautifully decorated for the holidays! We ventured up a grand staircase in the lobby to the restaurant entrance, which opened to a somewhat confusing layout. 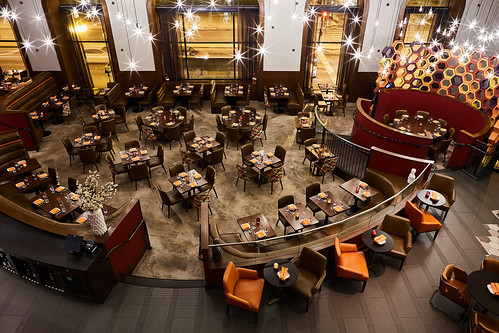 There are many different spaces to enjoy yourself in Mercat. You enter the restaurant in a raised area containing the bar, an open kitchen, some seating, and a semi-private round table. A small staircase (there is also a ramp) takes you down to a pit-like space with more tables and several booths. The layout is meant to mimic the open markets of Barcelona and many terraces found throughout Park Güell. There is even a private room on an upper level with a small balcony to overlook the entire restaurant. Jackie and I were led into the lower seating area, to a booth by the window. 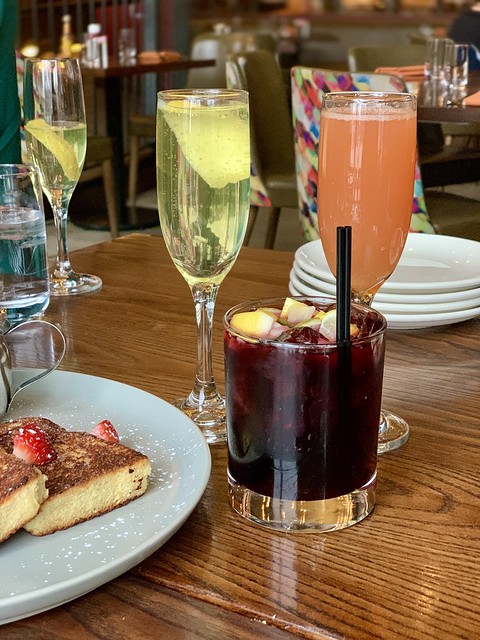 All brunches start with drinks, and Jackie and I were ready to imbibe! Mercat has a great selection of brunch beverages as well as a full cocktail menu. We started with the brunch “morning thyme” that mixes a Spanish sparkling wine with limoncello and thyme. This is a strong drink, and we highly recommend! The thyme balances the strong flavor from the limoncello, making it really smooth and easy to enjoy. It was sparkling, festive, and highly Instagrammable. Jackie tried the red sangria from the regular drink menu, which was flavorful with just the right amount of sweetness. I moved on to the Bellini of the day, which on my visit contained blood orange. I’m a sucker for blood orange beverages, and this was a refreshing follow up to the limoncello. 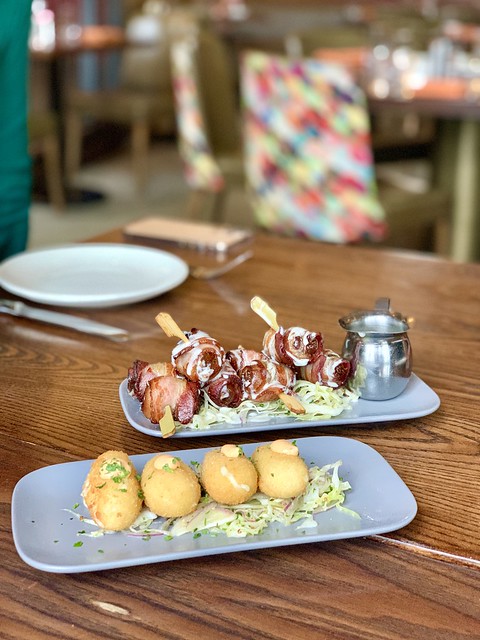 We selected a couple of tapas dishes to start. Our favorite were the cheese croquettes, because… duh. They were perfectly crispy on the outside, with a creamy, smokey cheese on the inside. The small dollop of pepper aioli on top of each added a little kick to each bite. The were packed with flavor and melted in your mouth. The bacon-wrapped dates were also a hit, but it’s hard to compete with cheese. The saltiness from the bacon balanced the sweetness of the dates. The Marcona almond in the center was a small but important detail that added crunch and depth of flavor to this perfect little bite. The best part was the creamy blue cheese drizzle on top. We would have liked the bacon to be slightly crispier, but all around, it was a great start to the meal! 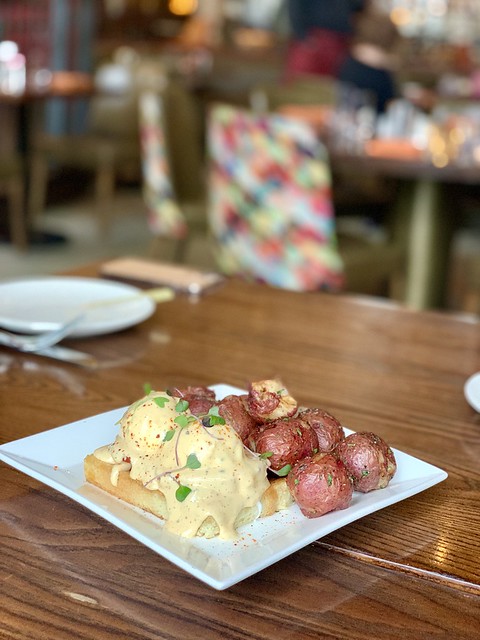 Moving on to entrées; the first dish to come out was the Mercat Benedict, which is a few levels more delicious than traditional Benedict. This Benedict replaces the English muffin with brioche, is topped with chorizo, and – most importantly – comes drenched in a creamy truffle hollandaise. The truffle is to die for. The brioche theme continued to the French toast dish. What I loved most about this is the fact that they cut off the crust from the bread. Everyone knows the French toast flavor doesn’t stand out as much in the crust, and I love that Mercat took that into account for ultimate enjoyment. 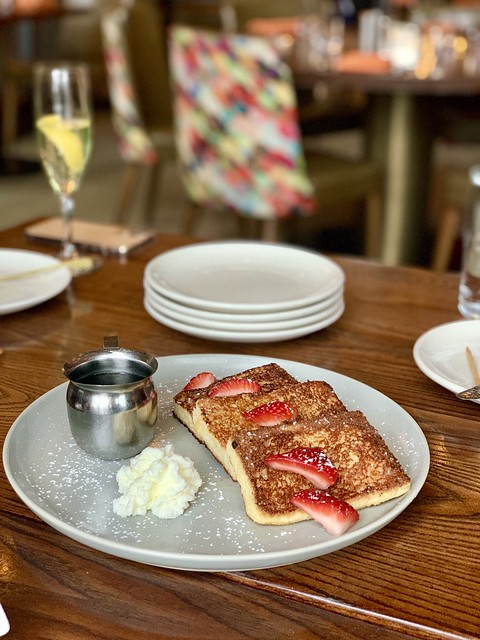 We continued our Catalonian journey with the “tortilla de samo,” which is essentially an omelet with thin cut potatoes folded in. Topped with smoked salmon and capers, this was a more savory egg dish with smokey and olive-y notes. 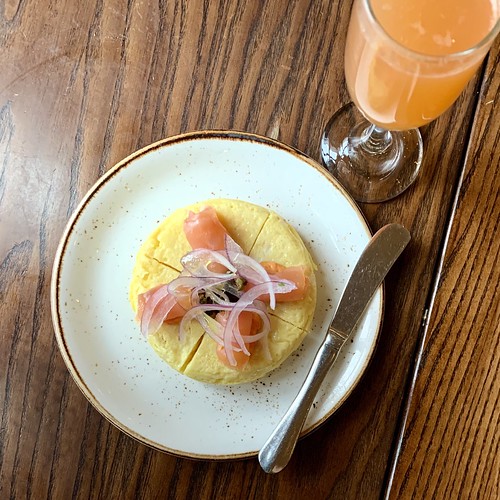 The final entrée we tried was the Mercat griddle burger, which we found to be incredibly juicy. The onion jam added a hint of sweetness and the blue cheese was a surprise choice, but toned down that sweetness with savory, robust flavor. The crispy fries are always welcome, especially with aioli. 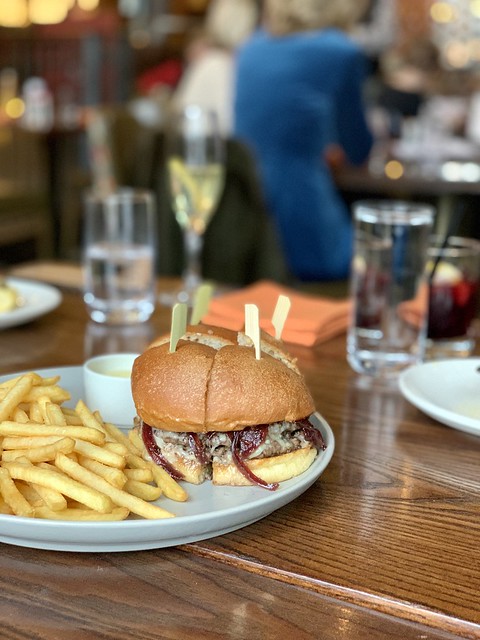 Jackie and I wrapped up our meal with “turron ice cream bon bons” for dessert. We loved the texture of these, with a little crunch from the Rice Krispies base, a creamy ice cream center, and a rich chocolate exterior. 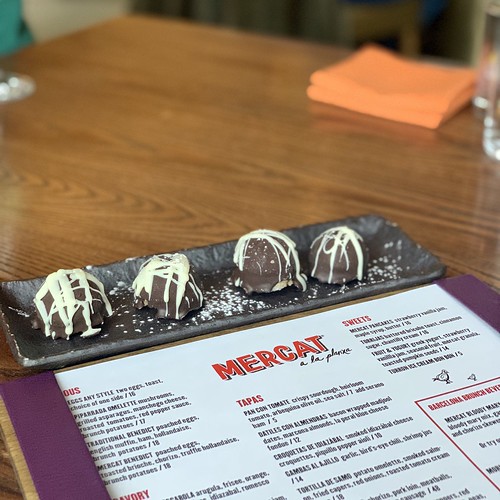 Mercat de la Planxa provides delicious food with a Spanish flair. Definitely check this place out if you’re in the South Loop!