I’ll be the first to admit, the Upper East Side has kind of grown on me. If you’ve read my past reviews, you know it usually isn’t my favorite neighborhood in the city. But the past few times I’ve made the trek up, I’ve actually discovered a few hidden gems. 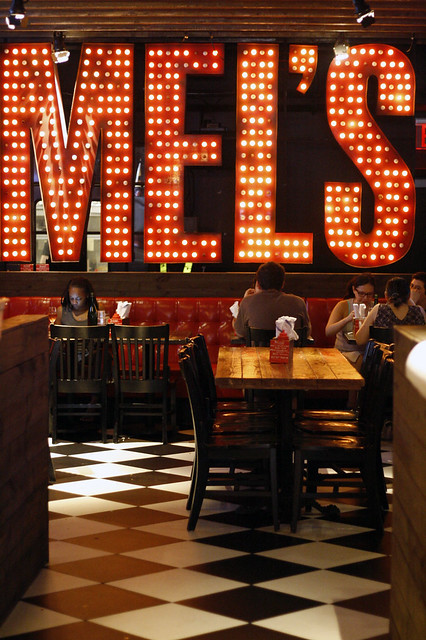 Particularly for brunch. Take for instance: Mel’s Burger Bar. Nestled along 2nd Ave in the mid 70s, you might miss it walking by. But trust us–Mel’s is worth seeking out, particularly if you’re looking for a large group bottomless brunch. 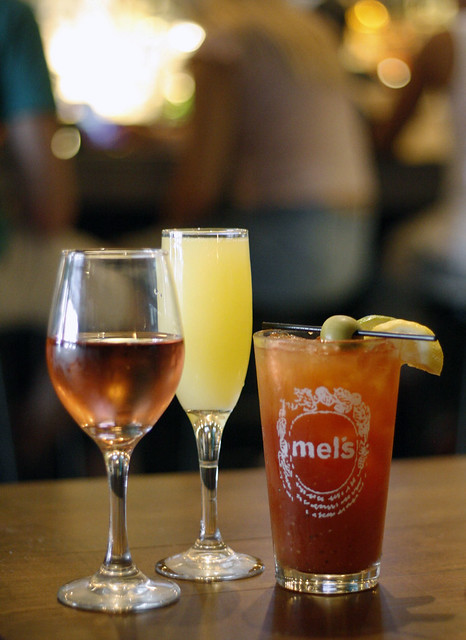 We were recently invited in to check out their new Rosé Bottomless Brunch. This is one of the more affordable boozy brunch options we’ve come across: $30 gets you one entree, plus unlimited Bloodies, Mimosas, and Screwdrivers. Pro tip: An extra $10 adds unlimited rosé to the mix. 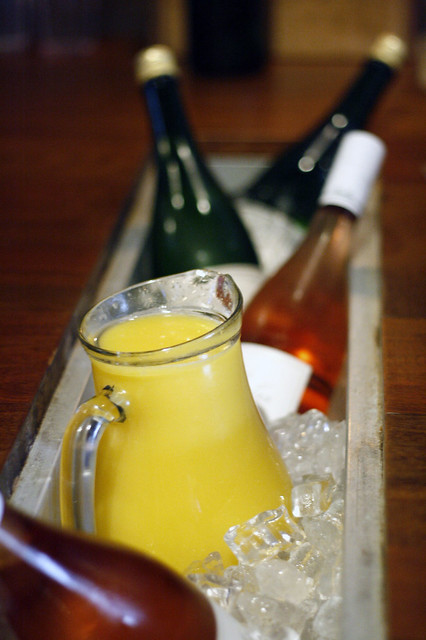 I was surprised to find a trough-sized ice bucket in the middle of our booth, filled with bottles of champagne, rosé, and a pitcher of orange juice. “Go ahead, help yourself!” the hostess exclaimed. We both loved this self-serve element and quickly popped open our first bottle. 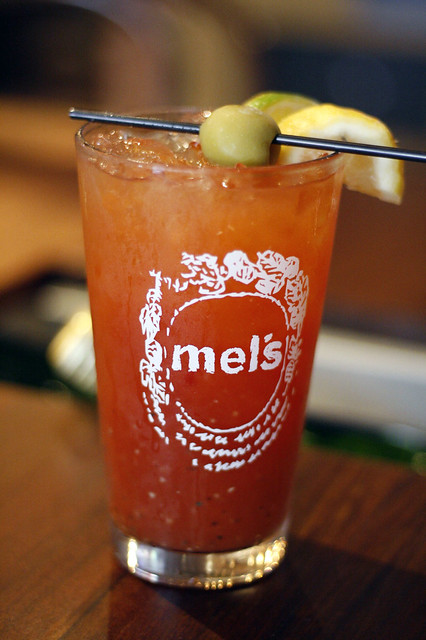 After we treated ourselves to a mimosa (or two), I made the switch to a Bloody Mary–it just isn’t really brunch if I don’t have a Bloody. While this drink seemed tame at first, the kick sank in after the first few sips. A few chunks of horseradish helped balance out the decent amount of spice and the tomato juice base. All in all, this was a solid Bloody. 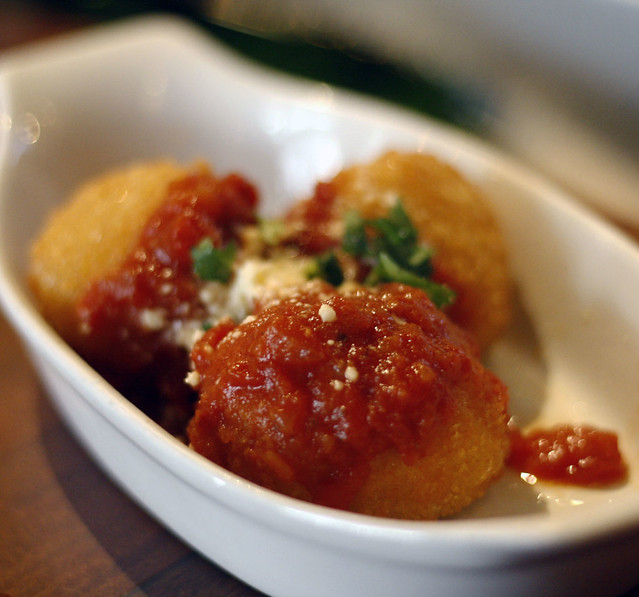 Truth be told, we were nursing a bit of a hangover from a friend’s birthday party that turned into a day drinking bonanza the day before and were both in need of something fried. The Mac and Cheese Ballz came highly recommended by our server, and they sounded right up our alley.

Alas, the flavors kind of missed the mark. The balls themselves were good–a great ratio of cheesy mac to fried, crispy outside–our taste buds were confused by the red sauce that coated the outside. Was it Mac and Cheese or Italian? The contrasting flavor profiles threw us for a bit of a loop, and it seemed a little out of place compared to the rest of the food we tried. 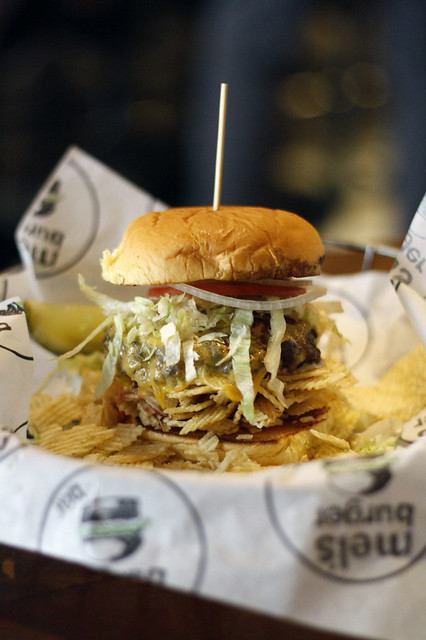 For our entrees, I knew I had to get a burger. We were at Mel’s Burger Bar, after all. There were quite a few varieties to choose from, but I ended up going with the Back Yarder. This somewhat traditional burger, topped with American cheese, lettuce, tomato, pickles, onions, ketchup, and mayo, had an inventive surprise: crushed potato chips. 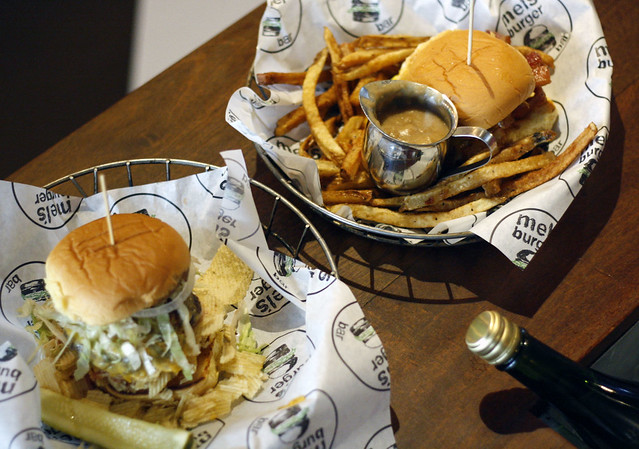 The burger was a perfect medium rare, and I really appreciated the inventive use of the potato chips. The rest of the toppings were fresh and not heavy-handed, really allowing the burger to shine.  We really enjoyed this spin on your classic burger. 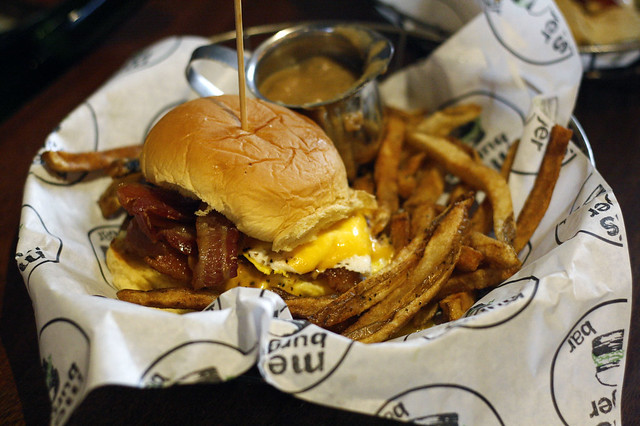 Fields tried the Heavy Duty Sandwich: three fried eggs, bacon, and cheddar cheese, served on a toasted roll with a side of fries and gravy to soak everything up. The eggs were cooked well and the gravy was a fun touch. The only downside was the bun was a little too small for the sandwich, so it was a messy dish. But that kind of added to the playfulness of what is presumably a hangover cure. Plus, who can go wrong with a side of gravy?! 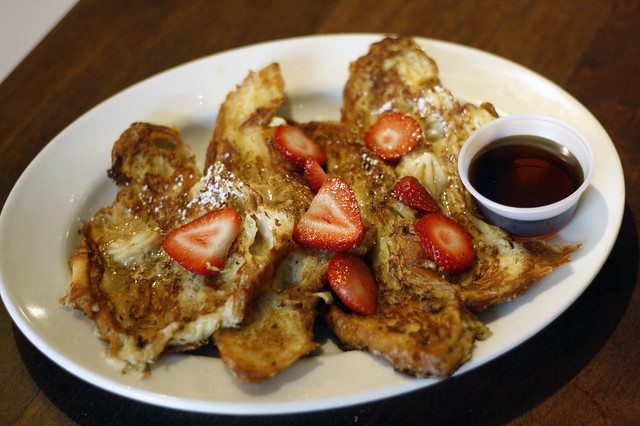 Another “must order,” according to our waitress, was the Croissant French Toast. The menu even claimed this was the “best damn French toast ever.” We dug in to see for ourselves. The croissants had been halved and flattened a bit; they were crispy on the outside, yet slightly gooey on the inside. Not to mention, the cinnamon butter and fresh strawberries were a nice addition.

Was it the best French toast I’ve ever had? Pretty damn close. Should you come to Mel’s and order it immediately? Yes. 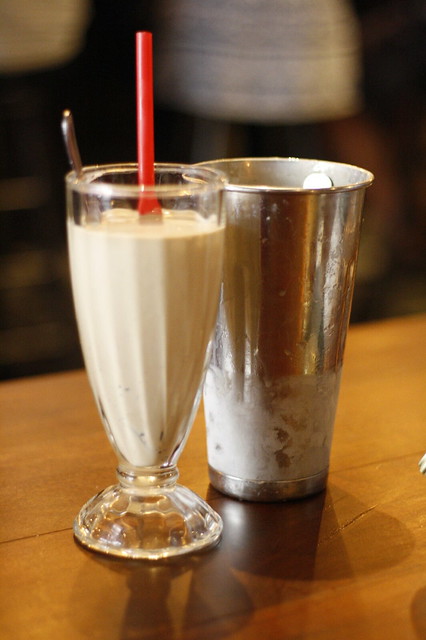 Lastly, we couldn’t leave without trying one of Mel’s famous spiked shakes. We ordered the Shot of Joe, which consisted of mocha chip ice cream,  Kahlua, and Bailey’s. If you’re opting to share a shake–like we did–you can even add an additional shot of booze for a small up-charge. Mel’s knows how to take care of their patrons!

The Bitches say: Four flutes. Mel’s Burger Bar has one of the better low-key, bottomless brunch options we’ve come across in the city. But stick to the classic dishes, like the burgers, sandwiches, and shakes.