When we were invited to try Lost Society, I had visions of sticky floors, sloshed drinks, and loud music. No doubt you’ve seen the long lines of 20-somethings on U Street waiting to get in to this spot on a Saturday night.

I, for one, have spent a few sweaty nights there. And as someone who brunches frequently, I’ve noticed that places that are sticky at night are often just as sticky in the light of day. Suffice to say that I had low expectations. 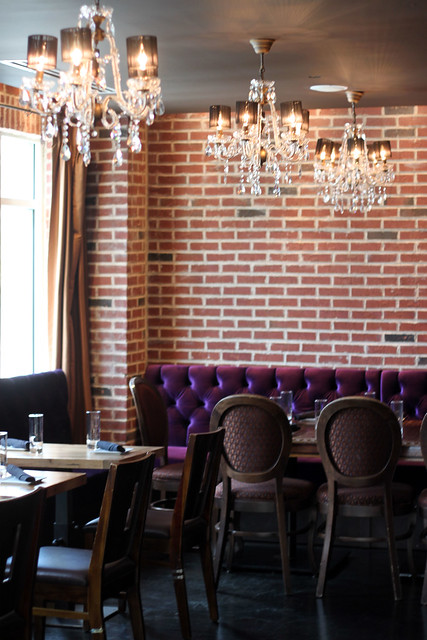 But when I walked in, I was impressed; the dark, retro steakhouse cleans up. The plush purple seating, Gibson girl wallpaper, and sparkling chandeliers manage to look lux, instead of seedy, in the daytime.

We were seated in a sunny corner of the restaurant and immediately remarked on the ‘90s jams softly coming through the stereo. 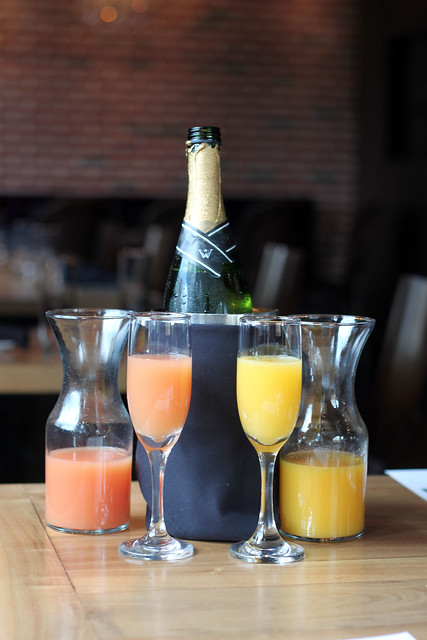 Our first order of business was coffee and mimosas. Lost Society doesn’t serve bottomless mimosas, but allows you to buy the bottle of champagne and pick your juice mixers. Our lovely server Beth was insistent on “I pop, you pour,” leaving the bottle of bubbly on the table to let us concoct our own drinks, which I appreciated. 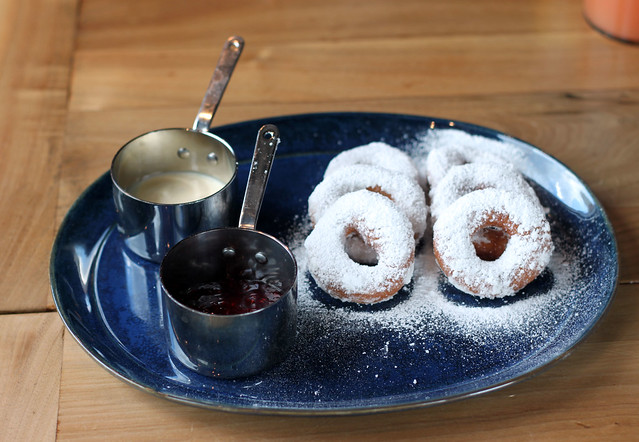 We couldn’t decide whether to try the doughnuts as a starter or as a dessert. After consulting with Beth, we opted to start with them. When they arrived, we were surprised to see mini doughnuts, not holes as advertised. Still, a doughnut is a doughnut, so we dug in.

Sadly, as my idol, The Bake Off’s Mary Berry, might suggest, these were overbaked. The size of the doughnut ring was so tiny, it is clearly an easy mistake to make. The drunken jam and creme anglaise served on the side were really sweet, which was too much with the powdered sugar.

As we examined the menu for entrees, I realized it’s mostly comprised of savory items. You can choose from “eggs and such” and lunch-forward items. There are two salads; and very little in the way of vegetarian-friendly entrees. 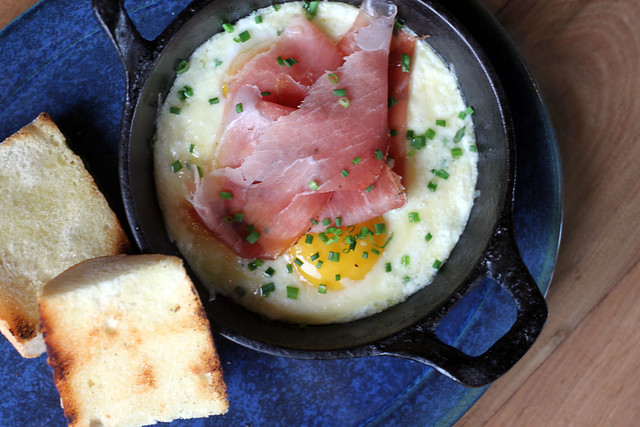 If you have a sweet tooth at brunch, you can try the doughnuts (which are really meant for sharing) and a bread pudding French toast, which could easily be a dessert.

The Baked Egg Skillet was pretty in presentation, with two eggs with runny yolk, gruyere cheese, mascarpone cheese, shaved ham, and chives, served in a cast-iron skillet with a side of toasted bread. The eggs were cooked well and the ham gave a salty touch. We were disappointed that just two eggs were used, however, as they barely filled the skillet.

I was curious why the “BLT” was printed on the menu in quotes, but understood once it arrived. It’s an open faced BLT on sourdough bread with double-cut bacon, lemon aioli, blistered tomatoes, parsley salad, shallots, and two poached eggs. 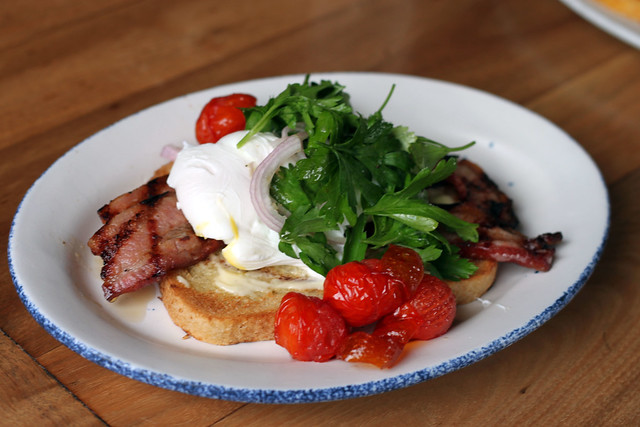 I appreciated the open face as I don’t need all those extra carbs from another slice of bread. I loved the blistered touch on the tomatoes, but wish the “L” was arugula instead of parsley. So much parsley overwhelmed the flavor, and I found myself eating around most of it. The eggs were closer to soft boiled than poached, but I can’t complain too much about that.

We also dug into the Fork and Knife Burger, which, as you might guess, was large. The white cheddar and garlic aioli gave it a good flavor, and we appreciated that they didn’t just throw an egg on top and call it a brunch burger. 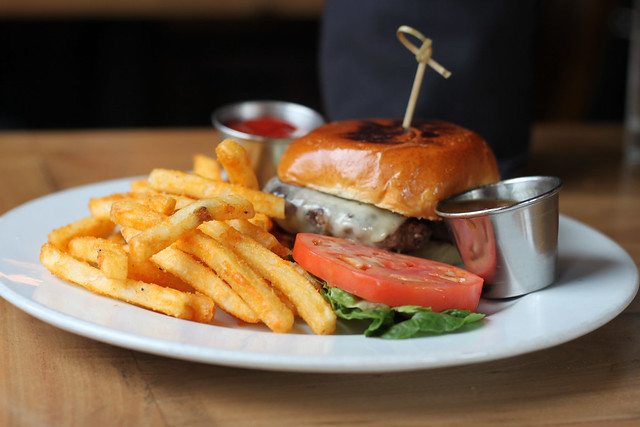 Our server suggested we get the demi glaze caramelized onions on the side, as they tend to make the burger soggy. This was a good recommendation; not just because of the wetness of the onions, but also because there were hardly any onions and very little flavor to the glaze. The fries were mediocre. 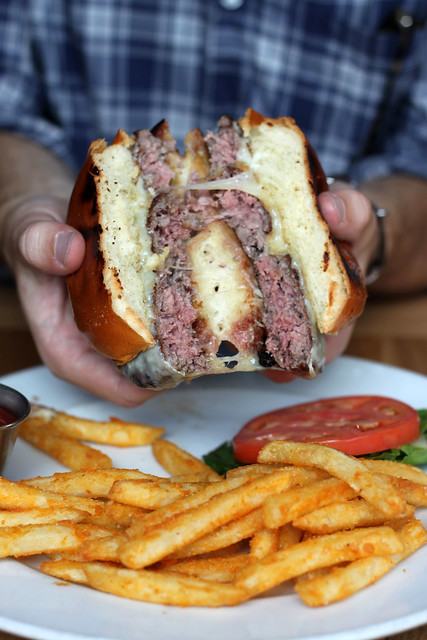 I suggested to management that they open the lovely second floor open patio for brunch while the weather’s still nice. I think the restaurant would be well suited to lean into its nightclub vibes and create a banging party brunch spot (in fact, that’s what it was, way back when).

The location and layout give it a perfect set up. I’d love to see the addition of a DJ or live music. There is a market for party brunches in D.C. with actually decent food, and Lost Society could rise to the top quickly with a few small changes to the menu.

The Bitches say: B-. Lost Society has real potential as a great party brunch. With a few tweaks to the food and ambiance, it could become a great spot to turn up during the day.