I have a love/hate relationship with winter time in the city. I love it because it usually means old friends make their way to town (who can say no to New York at Christmas time?). But I hate it because we live in Midtown…enough said. 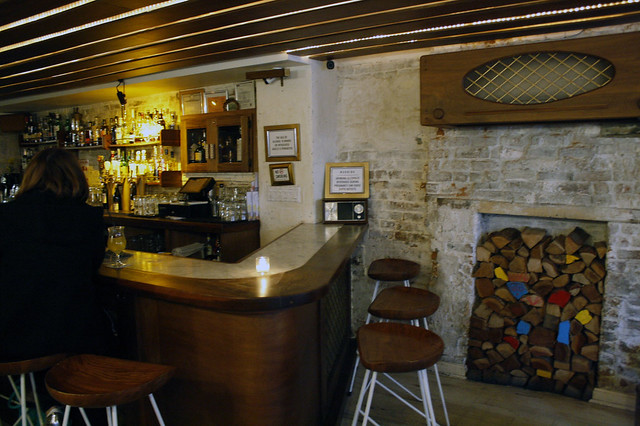 On this particular weekend, I was lucky enough to have my dear friend, John Newman, visiting. I knew I had to take him to a fabulous brunch that was nowhere near all of the Midtown tourists. Plus, I wanted to say hello to some Brooklyn friends I hadn’t seen in a while before everyone went their separate ways for the holidays. 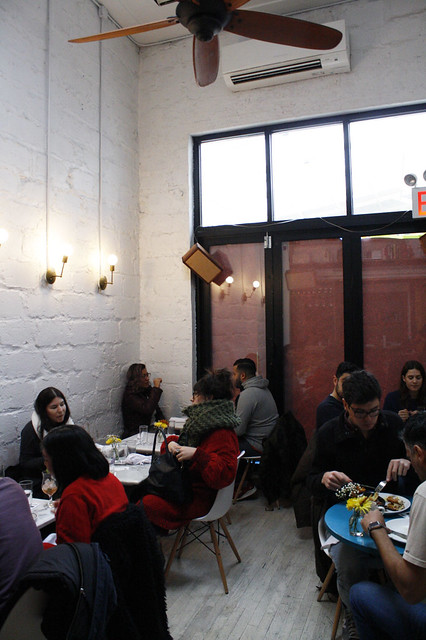 Loosie’s Kitchen, a Creole restaurant located (quite literally) through the kitchen of a Williamsburg bar of a similar namesake had caught my eye over the summer on Instagram and was having quite the resurgence on my feed. So what better time than now to check it out and convince my friends to tag along? 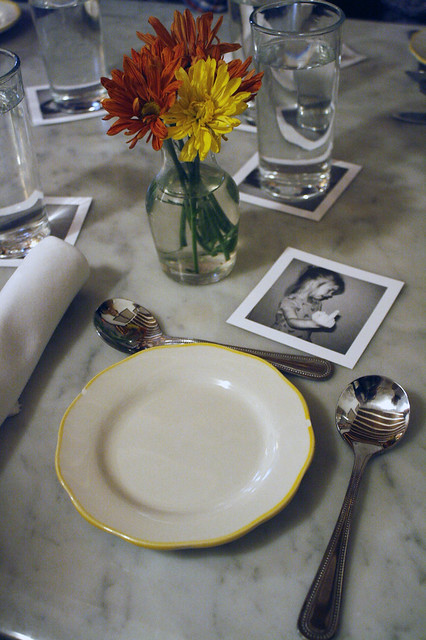 We convened at a corner table in Loosie’s Kitchen dining nook. Part of what had caught my eye about the restaurant was their patio; lush with greenery with pops of bright color, it looked like a Bitches dream. But alas, the patio is only open during the warmer months and the seven of us had to squeeze into the somewhat tight space. 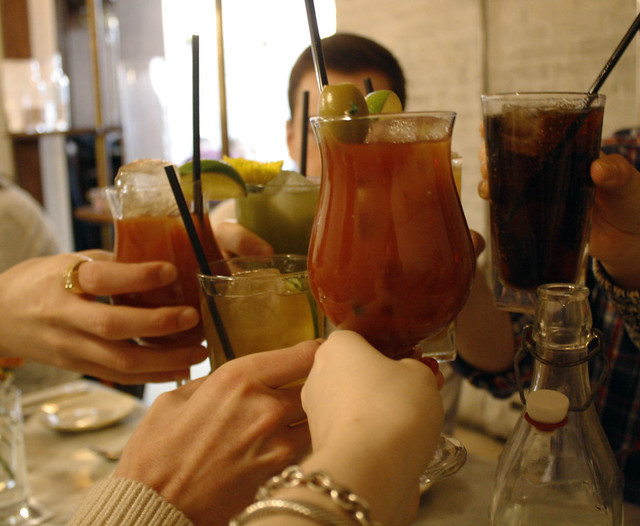 Given it was a bit of a later brunch, we’d already had our caffeine fix and were ready to dive in to the cocktails section of the menu. Mike and I both immediately called dibs on the Bloody Mary; it was pretty basic, but very easy to drink with a hint of a kick and a tinge of sweetness. It almost tasted like pepperoncini juice was in the mix. 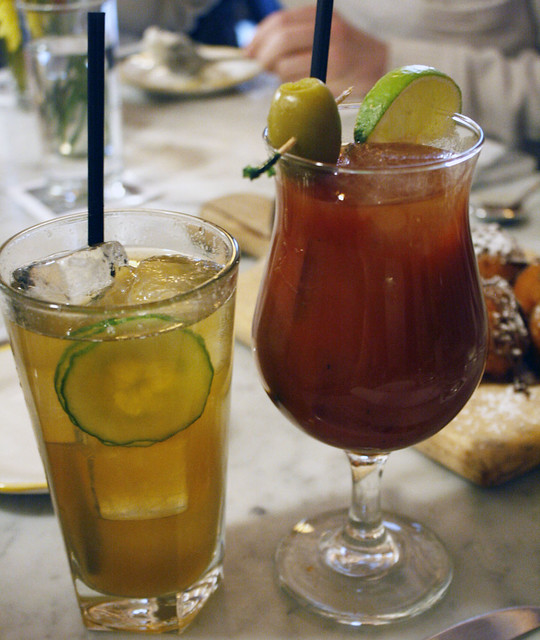 The Loosie’s Cup caught both John Newman and Ed’s eye. A combination of homemade Pimm’s, rhubarb syrup, Linie Aquavit, and cucumber, this cocktail was refreshing and pretty on-par with your typical Pimm’s Cup. 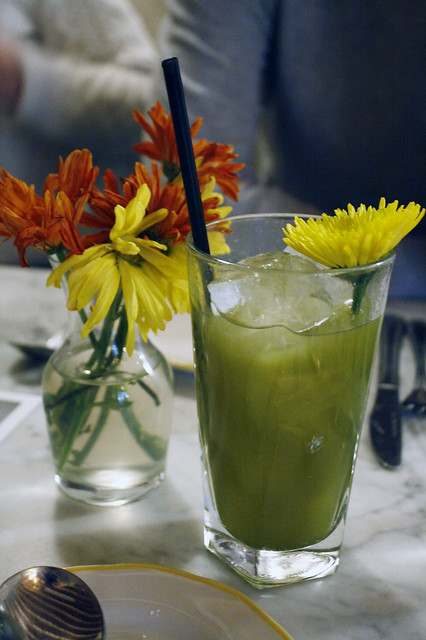 John Wood–the lone wolf of the cocktail group–went with the Matcha Patcha. This bevvie consisted of Citadelle Gin, Shōchū, génépy, and elderflower with lime juice and matcha tea. I’m not a huge fan of matcha or herbal cocktails, but gave this one a taste for the sake of journalism. It wasn’t my cup of tea (no pun intended), but John Wood really seemed to enjoy it.

As we tried to make up our minds about our entrees, we placed an order of the Nutella beignets with homemade whipped cream to share. 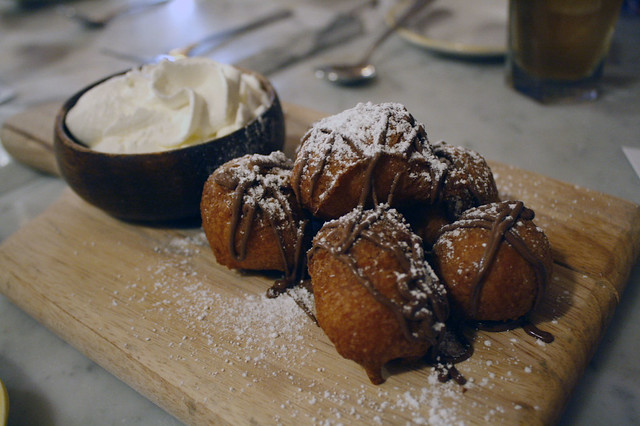 This pastry was absolutely delightful. Perfectly fried on the outside, stuffed with Nutella on the inside, and drizzled with even more hazelnut sauce, we easily could have split a few more orders of this sweet appetizer. The homemade whipped cream was top notch and was the perfect compliment to the fluffy beignets. 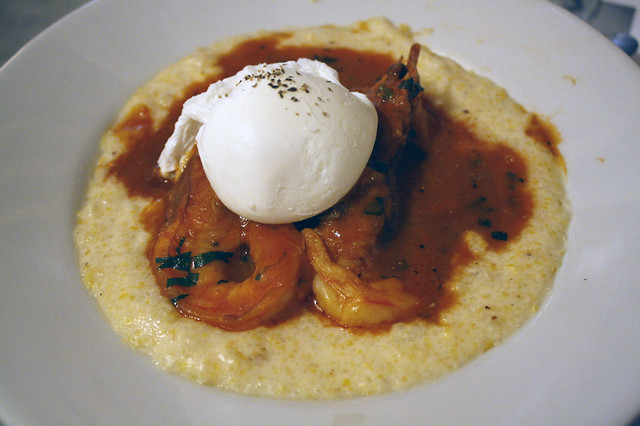 Since we were a larger group, we were luckily able to order almost one of each savory dish on the menu. Being that I was dreaming of New Orleans after my beignets, I opted for the shrimp and grits, as did John Wood. 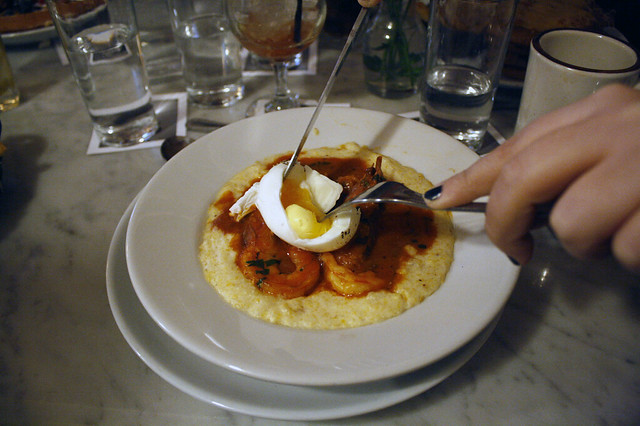 The tomato cuisiné and curry korma additions bumped this classic brunch dish up a notch. We forgave the fact that the shrimp were served head-on (ugh) and that my poached egg was basically hard-boiled (sigh), mainly due to the MASSIVE portion of the seafood and the impeccable flavor of the overall dish. By the end of our meal, I was practically scraping the bowl clean. 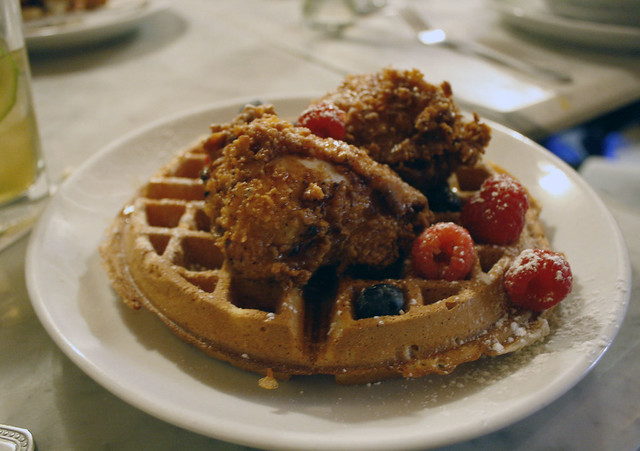 Ed ordered the Loosie’s fried chicken and waffles, which he wouldn’t stop raving about. And I don’t blame him! Served with house pickles, spicy maple syrup, and a handful of fresh berries, these were some of the best chicken and waffles we could remember trying. 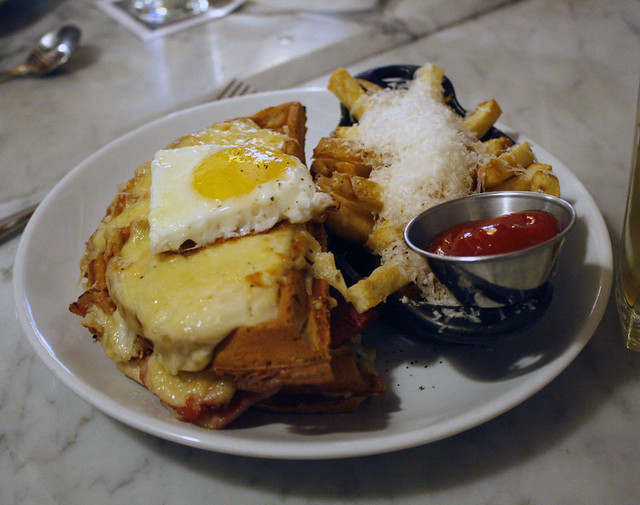 Shannon, John Newman and Simina were all intrigued by the waffles ham Croque Madame. Instead of being served with your typical bread, this sandwich was nestled between two decadent waffles and topped with a fried egg.

Some thought the dish had too much cheese, but I thought it had the perfect amount to counter the salty ham and sweet waffle. As if that wasn’t enough, it was served with handcut fries doused with finely grated parmesan cheese. 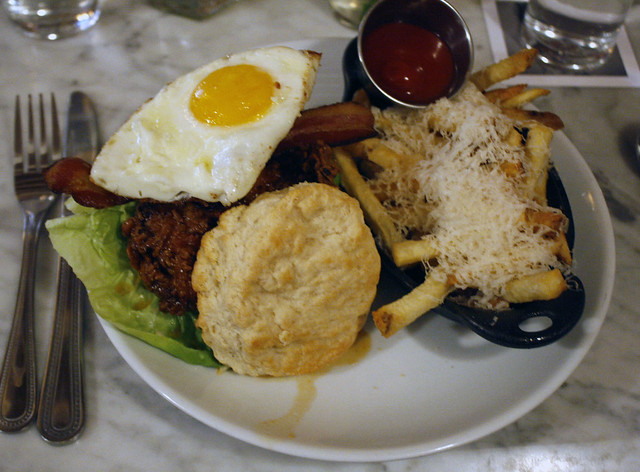 Mike went the sandwich route and ordered Loosie’s twist on fried chicken. This sammie was piled high with coleslaw, house pickles, bacon, a fried egg, and homemade spicy mayo. You can’t go wrong with fried chicken in my opinion, and the made-in-house accoutrements gave the dish a special touch. 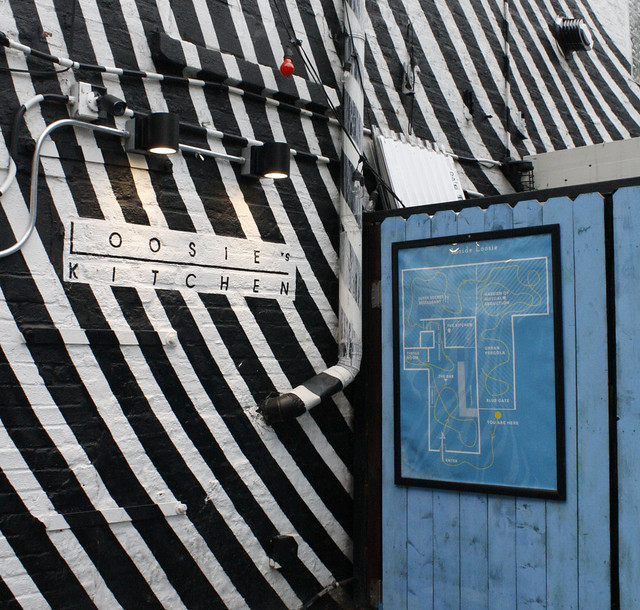 We will definitely be back in the spring or summer to order a second round of Bloody’s and beignets–this time on the patio!

The Bitches say: Four flutes. If you’re looking for a no-frills, Southern brunch in Williamsburg, Loosie’s Kitchen is your spot.

Loosie’s Kitchen serves brunch on Saturdays and Sundays from 11 a.m. until 4 p.m.