Lately I have been indulging in bottomless brunches—with warmer weather becoming more consistent, a boozy brunch is worth it. Plus, whenever anyone asks me about great brunches in Chicago, that question is always trailed with “what bottomless brunches do you recommend?”

So, as any good food blogger would do, I decided to take it upon myself to try some popular bottomless brunches—it’s for work afterall.

Cameron and I decided to head to a popular bottomless brunch one Saturday morning, that was perfectly situated between his house and mine, LoKAL.

LOKaL has two locations: one in Wicker Park and one in Lincoln Park—so, we decided on the Lincoln Park location on Ashland Avenue which is smack dab between us.

We were quite possibly the first two to arrive, which meant we had our pick of tables. And, it just so happened to be an exquisite day outside, so outdoor seating on the sidewalk patio was necessary.

LOKaL is one of the more unassuming brunch places I had been to, with its minimal decoration, and discreet location—if it hadn’t been for Google Maps, we definitely would have missed it. LOKaL is situated on the corner of Ashland Avenue and Altgeld Street, which is a very busy corner but surprisingly, we didn’t notice the cars or traffic throughout the brunch. 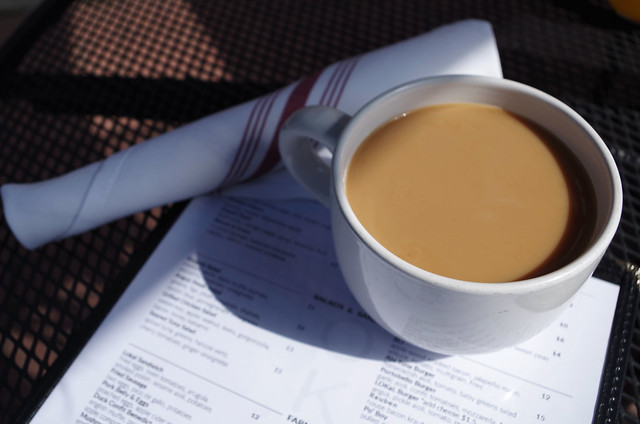 Our waiter was very nice, and took our first drink orders: coffee. The coffee was delicious, however my coffee was not as constantly replenished as I wish it had been throughout the brunch. Thankfully, I had my bottomless mimosa option to keep me from being parched. LOKaL offers a bottomless deal for $10 all you can drink Bloody Marys or mimosas. Yes, please! The one caveat was that you couldn’t sit and drink for more than three hours—but time limit makes sense, considering people would hold down the fort all day, and sit for as long as they could, especially on beautiful summer days! 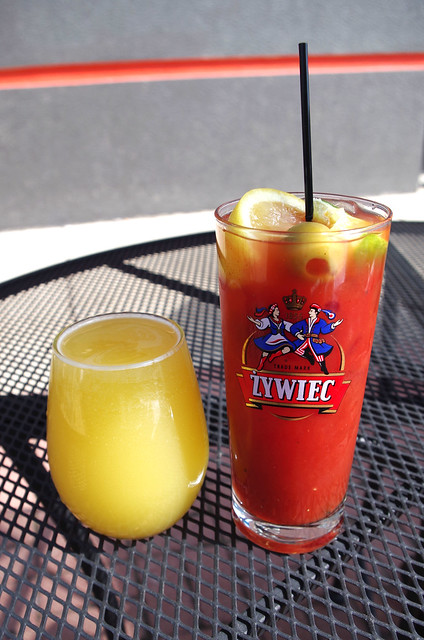 I ordered the bottomless mimosa option, and Cameron went for the bottomless Bloody Mary choice. Both were delicious and quite potent—a great deal considering they were $10 for all-you-can-drink and they were replenished far more rapidly than my coffee. 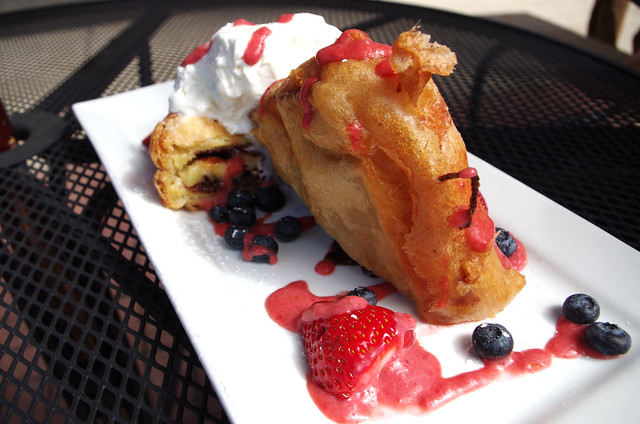 Both Cameron and I were craving savory dishes for brunch, but there was one sweet option that popped out at me the moment we received the menus—the Nutella fritters. I had to know what those were, and somehow convinced Cameron to try them with me. Oh boy, I am glad we did!

The Nutella fritters arrived at the table and it was as if the Nutella and French toast Gods came together and made this dish—it was incredible. From what we could discern, the dish was Texas toast, smothered in Nutella, stuffed with bananas, and then fried to perfection. Once it was plated, it was topped with a strawberry glaze, fresh berries, and whipped cream. 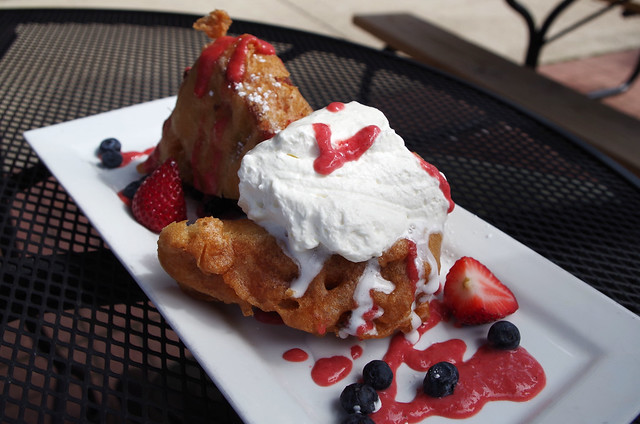 The fritters were crispy, and fried to perfection. The whipped cream tasted homemade, and the strawberries were fresh and flavorful. This was by far the standout dish for me, but then again, I don’t know if it’s possible for someone to not like this dish—this one is a crowdpleaser, for sure! I almost wish I didn’t need to share it, but I did have a whole other entree coming, so it was best to be shared. 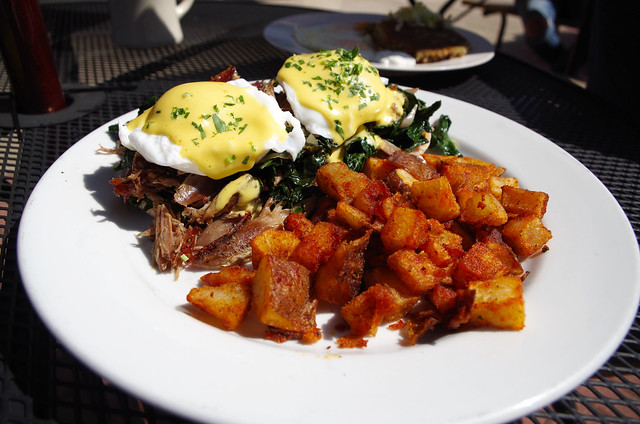 For Cameron’s savory, and individual entree, he chose the duck confit eggs Benedict. The dish had wilted kale, apple butter, Hollandaise, a duck compote, and two perfectly poached eggs. The dish looked and smelled delicious. Cameron really enjoyed it, stating that the duck was flavorful and was a nice twist to the classic. 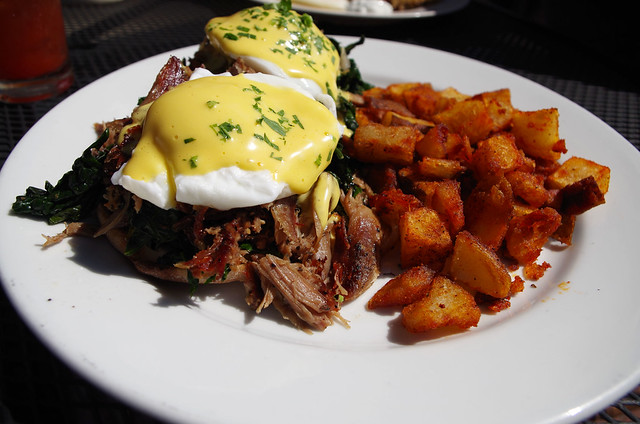 Cameron also called the side of breakfast potatoes “spicy, crispy jewels from Idaho” — not sure if the potatoes were actually from Idaho, but they were delicious and perfectly seasoned with a late heat kick — another dish and another win for LOKaL! 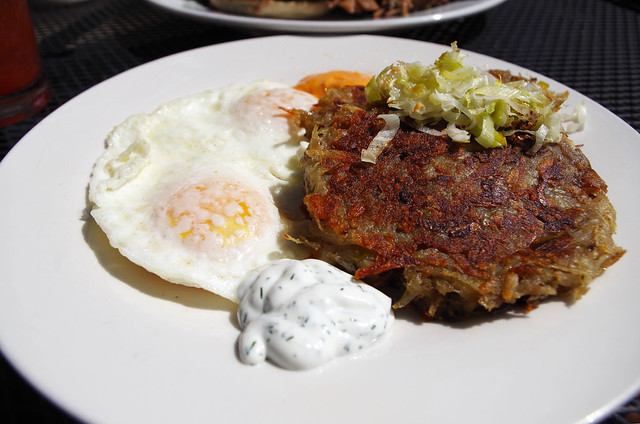 For my entree, I went with the potato pancakes with two fried eggs. The potato pancakes were delicious, and large to say the least. I couldn’t come close to finishing my entree, especially after the fritters (which secretly I was still dreaming about). The dill creme fraiche on the side was a very nice touch, and I covered every bite with that sauce. If I were to have one complaint, it would be that there wasn’t a larger amount of the dill creme. Besides that, the dish was delicious. 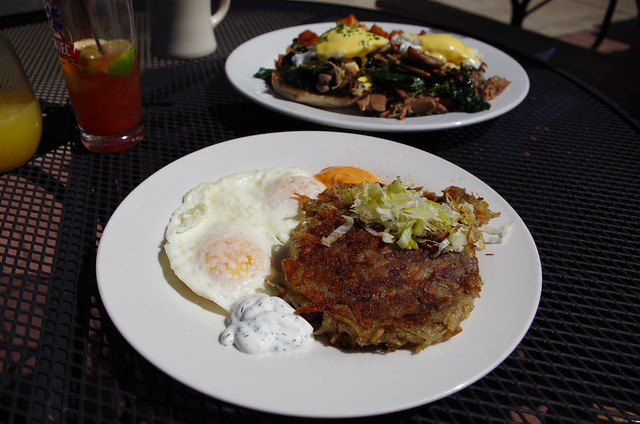 Between sharing the fritters, having our own entrees, and a bottomless mimosa and Bloody Mary deal, this brunch was a win for everyone. Initially when we walked up, I must admit that I was not expecting much, But LOKaL leaves all the talking to the food. There were options from indulgent worthy fritters, to gourmet duck confit eggs Benedict, and everything in between. I absolutely see why LOKaL is a favorite among avid brunchers in Chicago, and it has hit the top of my bottomless brunch lists to date.

The Bitches say: A-. Great food, and amazing bottomless deal get this spot an “A” rating, but the minus is for the slow service at the beginning, and the minimal decor—this would be such a cute spot if it was slightly more stylized.

LOKaL Lincoln Park serves brunch on Saturday and Sunday from 10 a.m. to 3 p.m.