Basic Bitches get tired of the same old, same old. Though there’s no shortage of Eggs Benedict in this city, we always get excited when a new international brunch is on the radar. Most recently, all that glitters is the neon-decorated Little Havana. 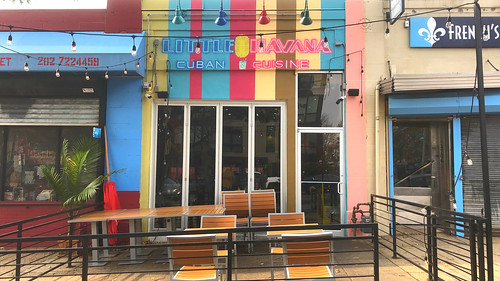 Little Havana does not hold back. You can’t miss the hot pink, blue, and yellow exterior that reels you in to experience a taste of what Havana, Cuba is all about. Bright murals and pleasant staff welcome you into the restaurant. There’s a front patio that seems like it would also be an ideal spot for sipping sangria and mojitos come the summer months.

It was a brisk winter day, so as soon as I sat in my seat, coffee was on my mind. I was immediately drawn to the cafe con leche and espresso. I could have been attracted to them solely because they were written in Spanish on menu,  but I have to say these beverages were more fragrant, fruit-forward, and comforting than your average espresso and cortado. I also ordered the restaurant’s famous sangria and fresh squeezed pineapple juice — you know, to at least pretend it was summer. 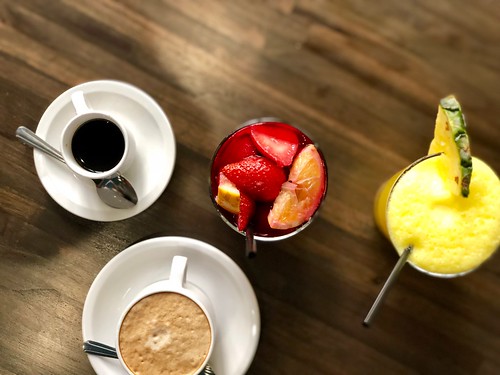 Latin America is known for its fruity flavors in both sweet and savory dishes, so I expected nothing less than fresh, lip-smacking flavors in these drinks. The sangria was piled with berries and citrus fruits. It was acidic, refreshing, and sweet, without inducing a migraine. The pineapple juice was tart, viscous, and garnished with a thick pineapple wedge.

As for food, we started with Cuban bread and a traditional cream cheese-like fish spread, kind of like a lox cream cheese you’d find at your local bagel shop. The bread was sliced thinly and was a pleasant surprise to start the meal — because everybody loves a complimentary bread basket.

It was tempting to order some of the brunch classics like chicken and waffles and the restaurant’s rendition of eggs Benedict, but we wanted the input of the waitress and what she advised would be an authentic representation of Cuban fare.

We decided on the ropa vieja hash and the Cuban stuffed portabella. When both dishes arrived it was evident that they were packed with flavor. The varying colors and textures before us stimulated all of our senses and we dug right in. 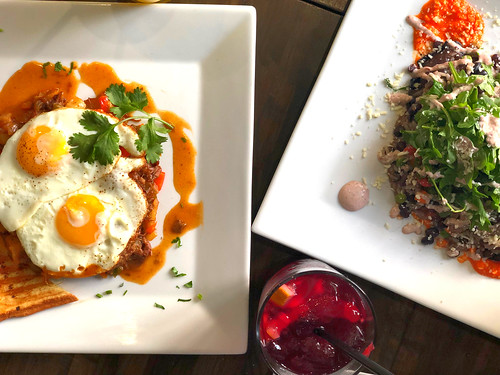 The ropa vieja hash was a delicious composition of that runny egg we know and love devoutly, the classic comfort of a spiced chili, the perfectly cooked pork that was hearty yet delicate, and the starchy, charred potatoes that absorbed all of the juicy runoff. The only critique of the ropa vieja hash was a lack of heat. The dish needed a little extra punch to give it that additional layer of Cuban flavors and balance. Whether it was intentional or not, this dish was sensitive to an American palate that may not handle heat so well. 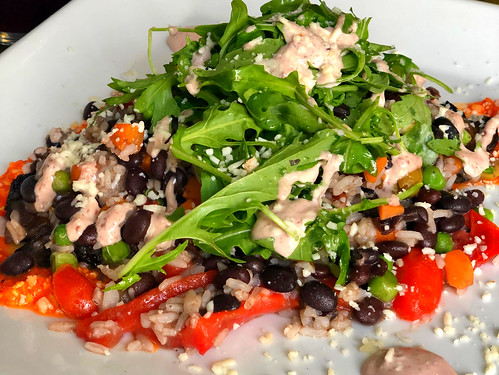 The Cuban stuffed portabella wasn’t anything I expected it to be, but in the best way. Though Cuban food boasts freshness, it’s typically a meat heavy cuisine. That said, this was a delicious vegetarian alternative. The meat-like mushrooms were cooked perfectly and the rice was well seasoned. Complemented by Latin staples like black beans, sautéed peppers, and cotija cheese, this filling entree felt like a mountain of Cuban tradition. 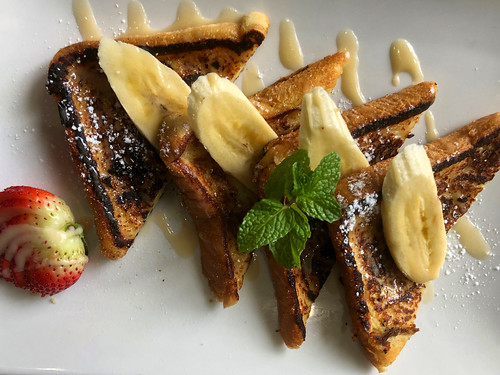 I know I said I was straying away from basic, but it’s not a Bitches’ brunch without something sweet. We ordered the French toast, which was listed as containing rum-soaked brioche, sliced banana, and caramel sauce. This dish sounded like it was my dream breakfast combination, but it fell short. The bread was slightly floppy and resembled regular, sliced white bread. The serving seemed a little small for a main dish, and the caramel looked like an afterthought. Between the rum and the bananas, there was a missed opportunity to display the tropical flavors Cuban desserts are known for.

Aside from the French toast, Little Havana has big things going for them. The Bitches say three champagne flutes for this Cuban gem.