I don’t have children. But if I did, I would take them to brunch every weekend at Little Beast Cafe & Bistro in Chevy Chase. It’s a neighborhood eatery that’s been open for less than a year, but I have a feeling it’s here for the long run. My out of town guest Andrea and I were treated to a charming afternoon of conversation and brunch, and I left promising to make another visit to the bistro the earliest my schedule will allow! 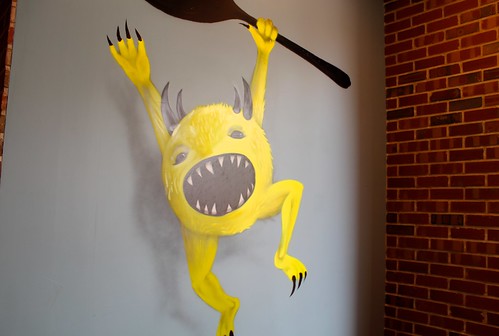 You can tell this spot exudes gaiety. Paintings of tiny monsters adorn the interior walls and outdoor patio structure. Families and millennials alike engage in heartfelt conversation over hearty platters. We were immediately greeted by Tracy, the director of operations. Tracy informed us that an overseas graphic designer was responsible for each mural. Should you feel so inclined (and you should), they have t-shirts available for purchase with the exact same artwork printed across the front. 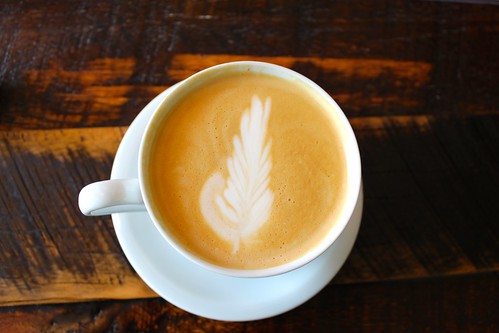 I wouldn’t describe myself as someone who can’t function without caffeine, but this particular morning I was in dire need of a pick me up. A flat white was the elixir of choice as we contemplated their diverse brunch options. My eyes gravitated toward the chorizo and sweet potato hash, which comes topped with a sunny-side up egg. Andrea settled on a sweeter plate, the ricotta pancakes.

As a novice chef myself, my go-to meal at home is usually a hash of some sort. So I love seeing how restaurants modify the relatively easy dish with their unique variations. I say this with utmost certainty: the chorizo hash at Little Beast was perhaps the best I’ve ever tasted in a restaurant setting. Due to its aggressively spicy nature, chorizo can be somewhat off-putting. The combination of seasoning with the caramelized vegetables yields a satisfying bite, and the addition of avocado functions more like a palate cleanser than a garnish. 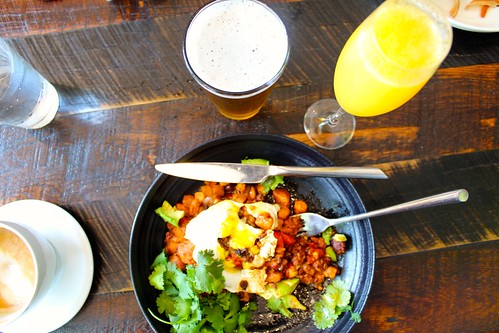 I quickly determined the dish could use something more than coffee to wash it down. Several minutes later, Tracy arrived with their house beer, the “Little Beast Lager.” They make it at a local brewery and – in my opinion – should bottle it and sell it at neighborhood liquor stores! It’s a crisp, summer beverage that goes down smooth and doesn’t leave you feeling bloated like some brews are guilty of doing. 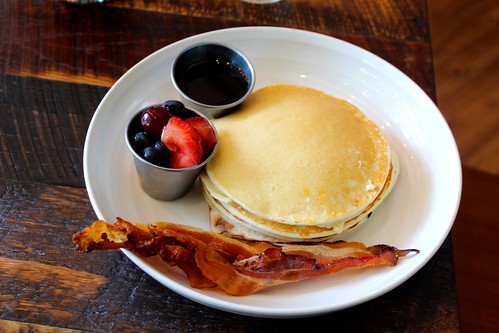 As for the pancakes, Andrea loved how the ricotta made them creamy. It cut the sugariness, and the crispy bacon was a perfect savory choice to pair alongside such a hearty meal. Plus, who can say no to a mimosa made with fresh squeezed orange juice?

It’s worth nothing just how incredibly welcoming and respectful we found the staff at Little Beast. On a rather busy morning, Tracy took time explain the concept behind the restaurant, revealing the name “Little Beast” is a moniker the owner calls his own children. We were briefed on their one-year anniversary plans and other developments patrons can expect as the restaurant prospers. Family is the backbone of their success, and that was evident after our brief, sweet interaction with Tracy’s children (who are happy to lend their services should servers become occupied in other capacities).

My only regret about Little Beast is that I didn’t discover it 10 months ago when it first opened. The service is impeccable and the food extraordinary. This is absolutely worth the trip to Chevy Chase.