A chill brunch with your best gal friends is great and all, but there comes a time when the Bitches are itching for more. We recently had a moment where we didn’t mind overindulging and foregoing a quiet city morning with some bumping music. Luckily, D.C. has tons of restaurants with notoriously over the top brunch scenes, so on this particular morning we chose to get down at Lincoln.

Lincoln restaurant, in downtown D.C., is part of the Presidential Restaurant Group, the same folks that brought us Teddy and the Bully Bar and Declaration. We were excited to visit a restaurant that reminds us just how historic this city really is, but with a side of young energy. 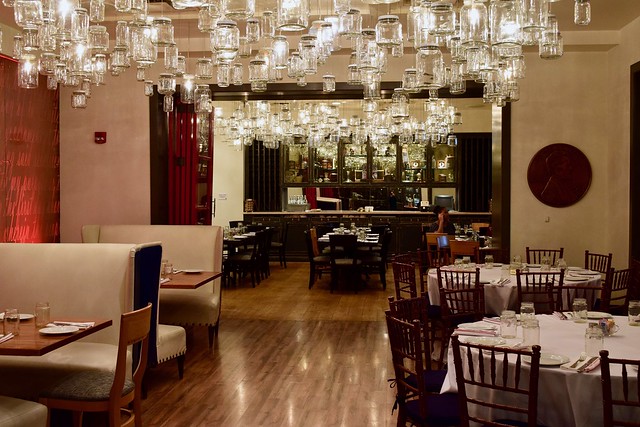 As we arrived, there was no hiding that Lincoln was a pretty restaurant. The spot has a unique aesthetic due to the signature decor. The floor is made up of pennies, because, well, Abraham Lincoln, and the walls are adorned with art by local artist, Maggie O’Neil.

I went to brunch with my roommate and, after our late night out, we were ready to go in on a bounty of foods and drinks. We were greeted by the smell of a very tempting, fully loaded buffet, as well as some very kind hostesses. We were seated near the DJ, which was a bit loud, but had an awesome view of the whole restaurant and gave us an opportunity to vibe with the beats. 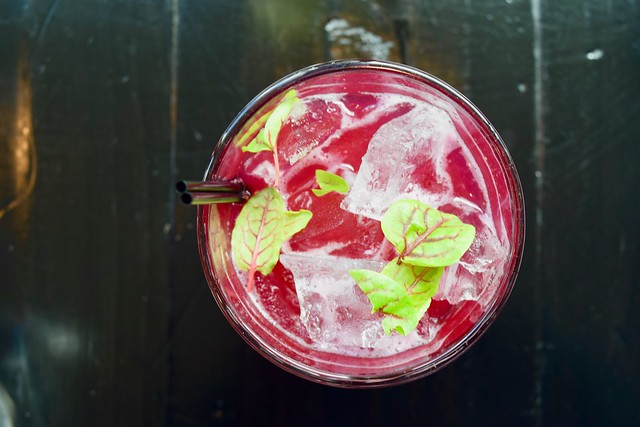 We decided to opt for the regular brunch menu and not the buffet, so we could really see what Lincoln had to offer. We started with a classic Mimosa, a Bloody Mary, and one of their most popular, highly recommended winter cocktails: the Gettysburg Address, made with vodka, beet puree, ginger, lemon, and bitters.

We were in no rush, so we waited for our drinks to come out before we put in any food orders. The mimosas were strong, flavorful, and because we did bottomless, the waiter did a very good job at making sure our glasses were never empty.

The Bloody Mary was well seasoned, and I could definitely taste that it was made with a high-quality vodka, although the garnish was standard.

The real beverage MVP was the Gettysburg Address. It was as gorgeous as it was vibrantly pink and robust in flavor. The beverage had the perfect mix of acdic from the lemon, tang from the bitters, and spice from the ginger. We were fully behind the flavors happening here.

Drinks were fulfilling our rowdy intentions, and we were then ready for the food, possibly too ready. We ordered the smoked salmon deviled eggs, a parfait, and biscuits to start, followed by our mains: huevos rancheros, and their fall version of eggs Benedict. 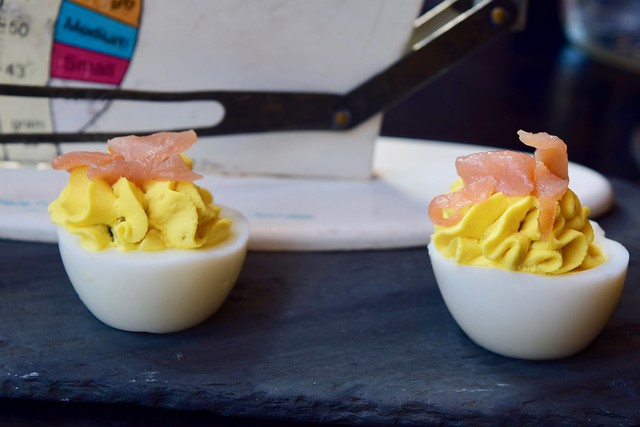 The deviled eggs came on an old-school egg scale and were not overly mixed with mayonnaise. The salmon added an extra salty, buttery component to the dish and it was a nice way to start our ever-growing meal. 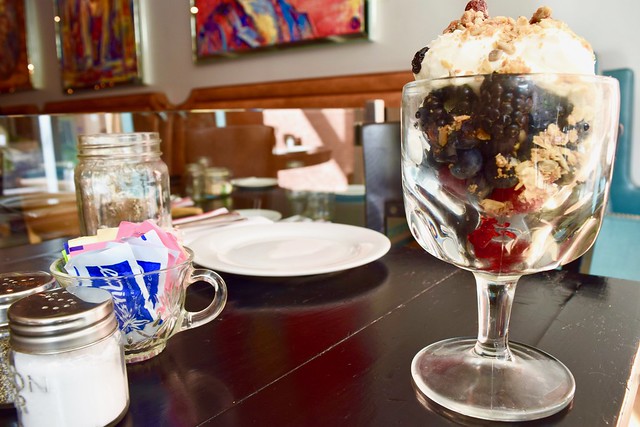 The parfait came next. And, while it looked bright and refreshing, it just wasn’t done right. The yogurt was super thick, almost like a marscapone, and was plopped on top of granola. We call granola a topping, because it goes “on top” of the star ingredient—which in a parfait, is usually the yogurt and fruit. 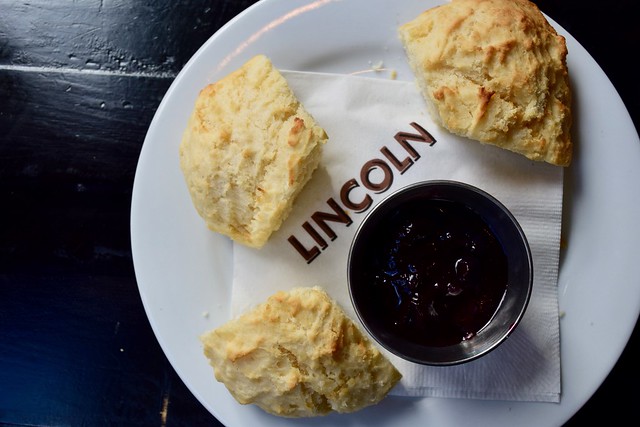 Biscuits were delivered before we could finish chewing, but we were stoked to move on. Luckily, the biscuits didn’t let us down. They were super fluffy and accompanied homemade jam. Any Southern food lover would appreciate this simple brunch staple. 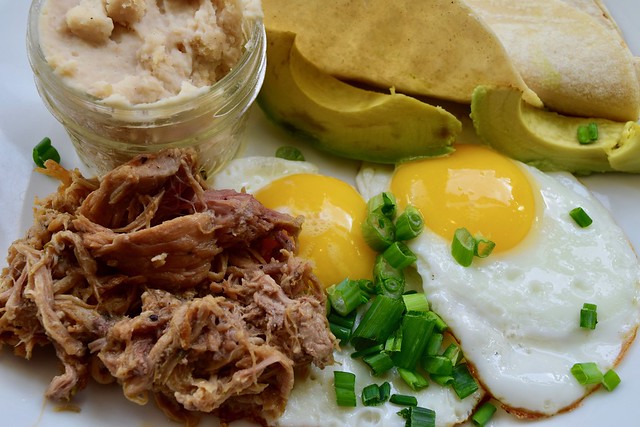 Despite the amount of food we just took down, these chicks were ready for more. My roommates’s huevos rancheros came to the table, but we were both slightly confused. This dish was more of a deconstructed taco concept than it was huevos rancheros. The components on the plate were tasteful, but they didn’t all mesh together; it wasn’t a true huevos rancheros dish. 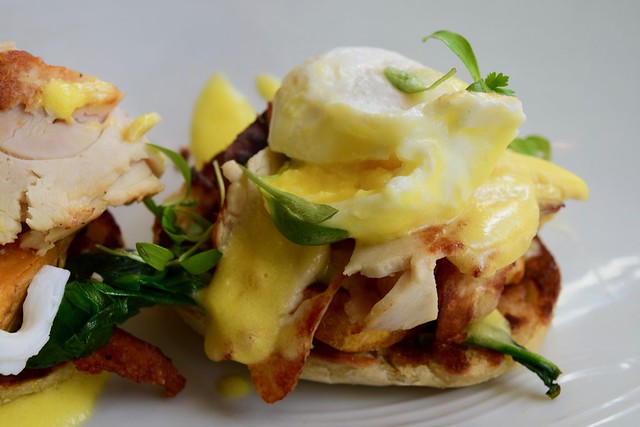 The seasonal eggs Benedict, however, were some of the best we have ever had. Yes, we know, bold statement. This Benny was served on an English muffin with roasted turkey, sweet potato, cranberry mustard, sautéed spinach, and Hollandaise sauce. These flavors, accompanied by an exploding egg yolk, were insanely decadent, but surprisingly classic. This entreè warmed every taste bud and really resembled Thanksgiving in every bite.

To say we were “full” was an understatement of how we were feeling at this point, but we weren’t ready to add it to our dialogue for the day, or at least not until after dessert. We had Lincoln’s signature doughnut holes with vanilla ice cream as well as, what I always end every brunch with, the French toast. 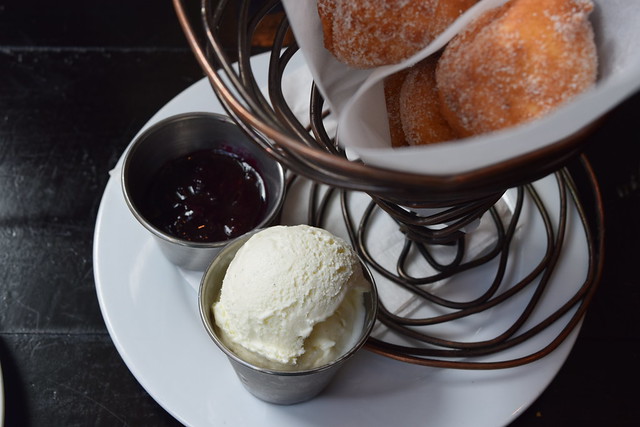 The little pillows of cinnamon and sugar, also known as the Doughnut-Hole-In-One, were so sweet and delicious, as a doughnut hole should be. There’s something special about a super fresh doughnut, and Lincoln does it extremely well. 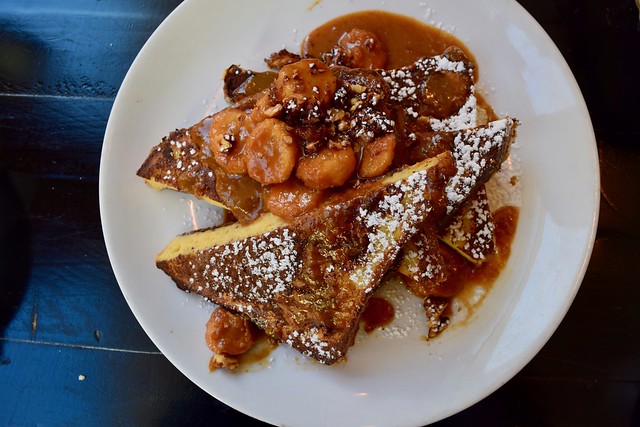 The French toast ranking is a metric I take very seriously when it comes to finishing off a morning (or now afternoon) of brunch. The seasoning and crust was fine, but the inside was completely raw. This French toast was also a bananas foster French toast. The caramelized bananas, though, were unripe and bitter. No amount of butter or sugar could conceal the flavor of an unripe, green banana.

The Bitches say: B+. The vibes are fun! If you’re looking to get a little tipsy, eat a ton, and find excellent service, Lincoln may be the spot for you. There are a few dishes you shouldn’t add to your brunch order but, hey, that’s why we’re here, right?