I love the vibe in the West Village. It is far and above one of my favorite neighborhoods in the city. And there’s just something about walking around the area on a sunny, warm spring day, taking in all that New York has to offer. 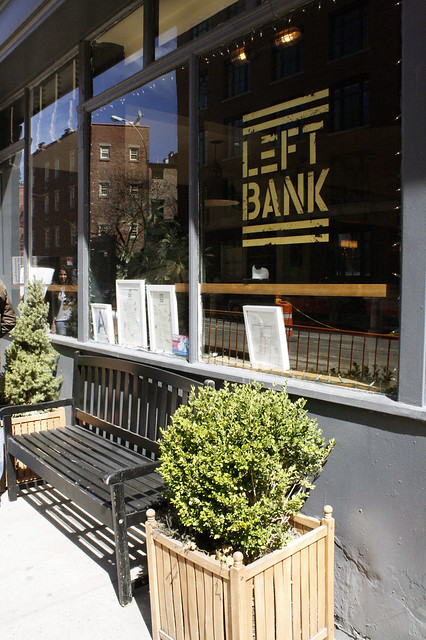 Tucked away on the corner of Perry Street and Greenwich Street in the West Village is Left Bank, a refined American bistro nestled between cobblestone streets. I had heard about this New York haunt a few times before, and we had recently been invited in to check out their brunch. So we decided to make a day of it, walking around the neighborhood and along the West Side ahead of our meal.

The mixture of navy walls, exposed white brick, and unpretentious table settings give the restaurant a bit of a nautical, mess hall feel, but the walls are lined with art deco-style artwork. They’re unique in the sense that they depict menus of days gone by at Left Bank, which left me wanting to attend one of their dinner parties in the future. 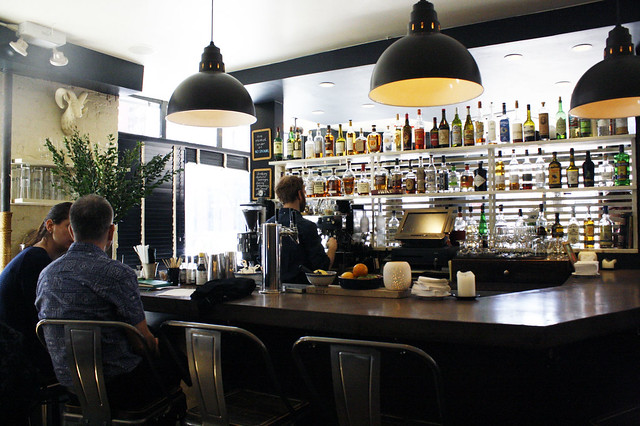 We’d been told both the Dutch Baby and the smoked salmon and whitefish latkes were must-trys, so we knew we had to order those. But to start, we needed a bit of a pick-me-up and opted for a local craft brew for Fields and a Bloody Mary for me. 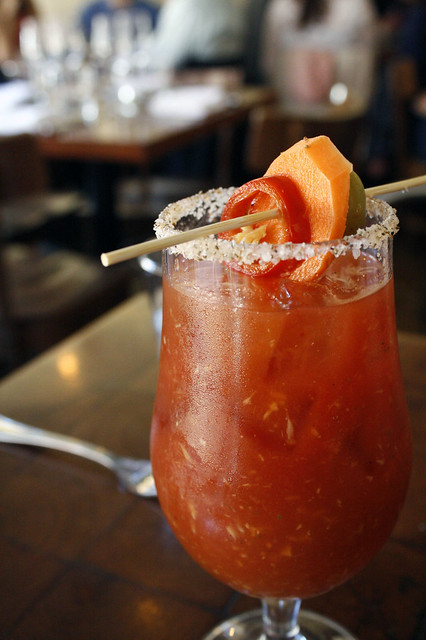 I could tell the Bloody Mary mix was homemade, with plenty of horseradish and a good ratio of spices. I appreciated the accoutrement of pickled veggies and smoked salt, both of which gave the cocktail a nice kick. This Bloody was enjoyable, and memorable, so much so that I ended up ordering a second round. 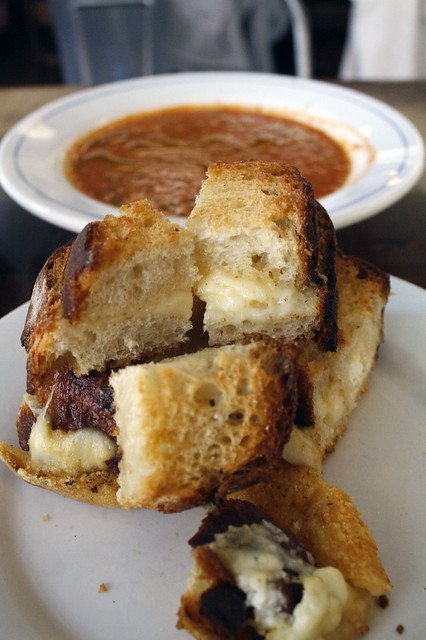 We ended up sharing three dishes: the two I mentioned earlier, as well as the chopped up grilled cheese and tomato soup. The soup was chunky and fresh, with a healthy drizzle of EVOO on top. 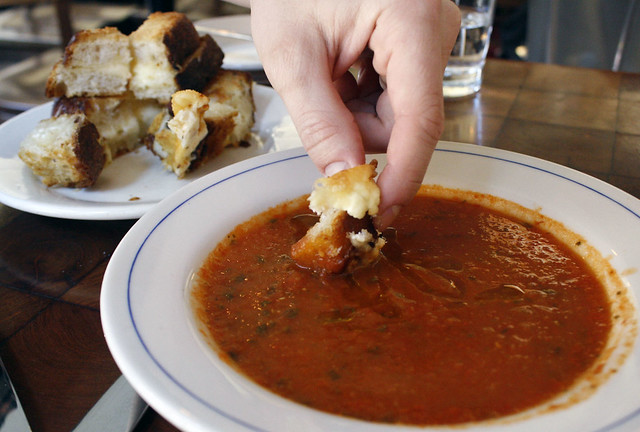 The bread on the chopped up grilled cheese was perfectly crunchy, but rather thick, and we wished there was a bit more cheese to balance out the bite. This was a fun dish though, since it allowed you to dip the bite-sized pieces into the tomato soup–which is really the only way a grilled cheese should be consumed, in our opinion. 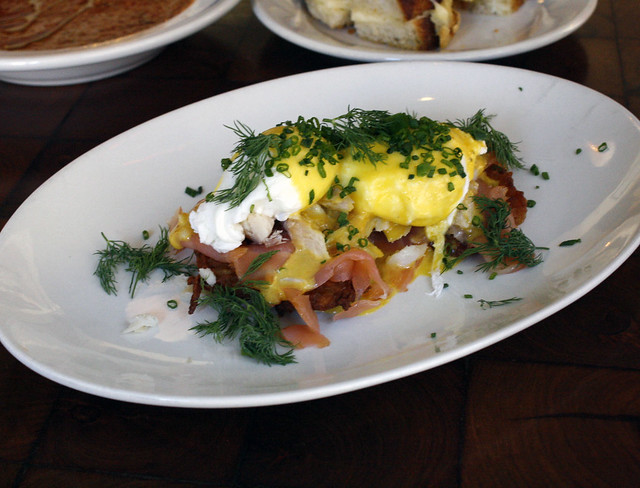 The smoked salmon and whitefish were served on top of fresh latkes, and accompanied by poached eggs, Hollandaise sauce, and a few sprigs of fresh dill. We glanced around the room prior to ordering and saw that nearly every table had ordered a side of latkes, so we were expecting this dish to be a hit. 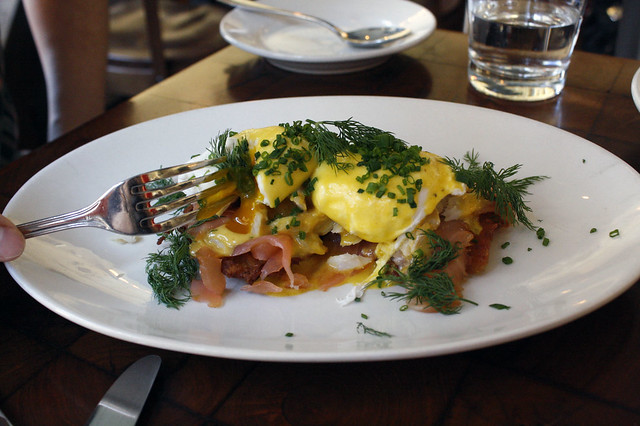 We weren’t wrong. The smoked fish was incredibly fresh, the eggs were perfectly poached, and the dill added a burst of fresh, herby flavor. They weren’t heavy-handed on the Hollandaise either, which is a huge plus in my book. The only downside was there were a few thin bones hidden among the whitefish we had to pick out, but that’s to be expected when fresh fish is involved.

We ordered the Dutch Baby at the beginning of our meal, knowing we’d be sharing it for dessert, as it takes at least 22 minutes to prepare. But it was well worth the wait! 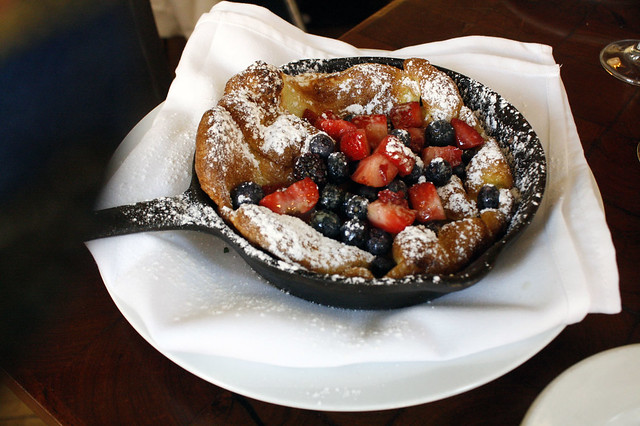 Served in a piping hot cast iron skillet and topped with fresh whipped cream and berries, butter, and maple syrup, this pancake was fluffy on top, with a bit of a crust on the bottom from the cast iron. These two textures, combined with the juices of the fresh berries, made for the sweetest, most delicious bite. 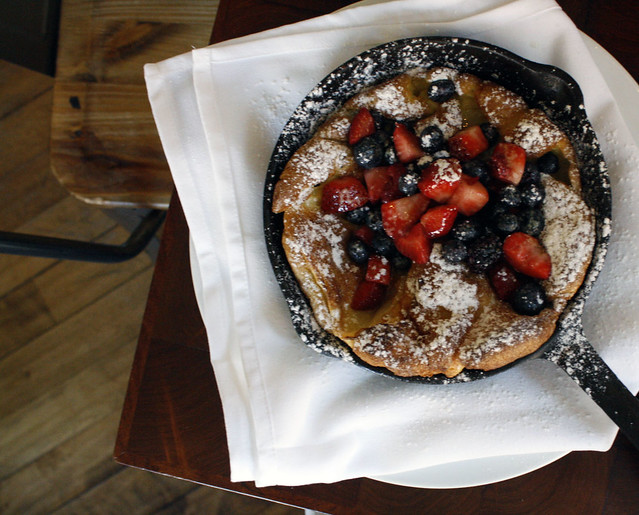 We strolled out of Left Bank feeling full and satisfied, remarking how we were already planning on making a return visit for their delectable dishes.

The Bitches say: Four flutes. The food and cocktails offered during brunch at Left Bank are fresh and near-perfection. Don’t sleep on the Dutch Baby!

Left Bank serves brunch on Saturdays and Sundays from 10 a.m. until 4 p.m.