There’s an elephant in the room – or rather, on this website: La Vie. It’s the restaurant that received Tom Sietsema’s wrath when he published a scathing Washington Post review entitled, “La Vie on the Wharf is so bad I’m only writing about it as a warning.” We hear him, we get him, but we only half agree with him because – well – brunch is a different beast. 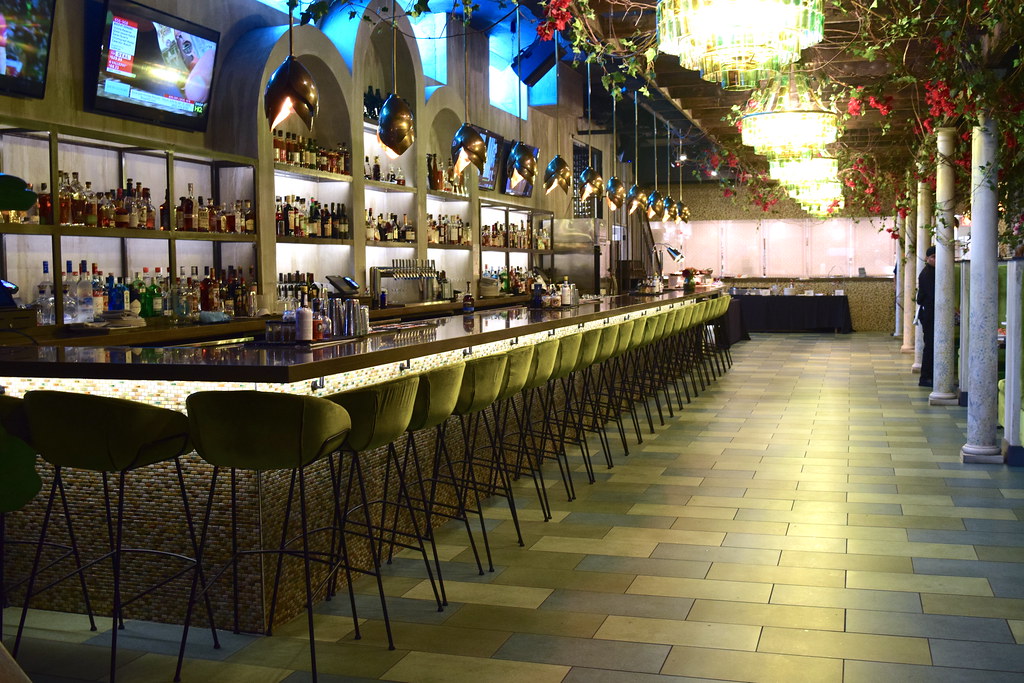 The wide-open, 360-degree waterfront views are impressive. The best word to describe the decor is “embellished.” The interior looks like a circus performer adorned from head to toe with jewels, hot pink velvety dressings, and delicate crystals. If a cruise ship and a nightclub partnered to create a restaurant, La Vie’s brunch set up would be the result. To a foodservice professional, culinarily driven, and restaurant-business minded individual, it would be easy to see La Vie as unrefined. But the fact is, those people also don’t fancy the Carnival Cruise aesthetic that many District citizens and visitors probably do. To many, La Vie brunch is a whimsical adventure in the Garden of Eden. The atmosphere allows large groups to order crazy cocktails, make their rounds at the various ivy-lined brunch stations, and remain high above the elements that grace the boardwalk below them. 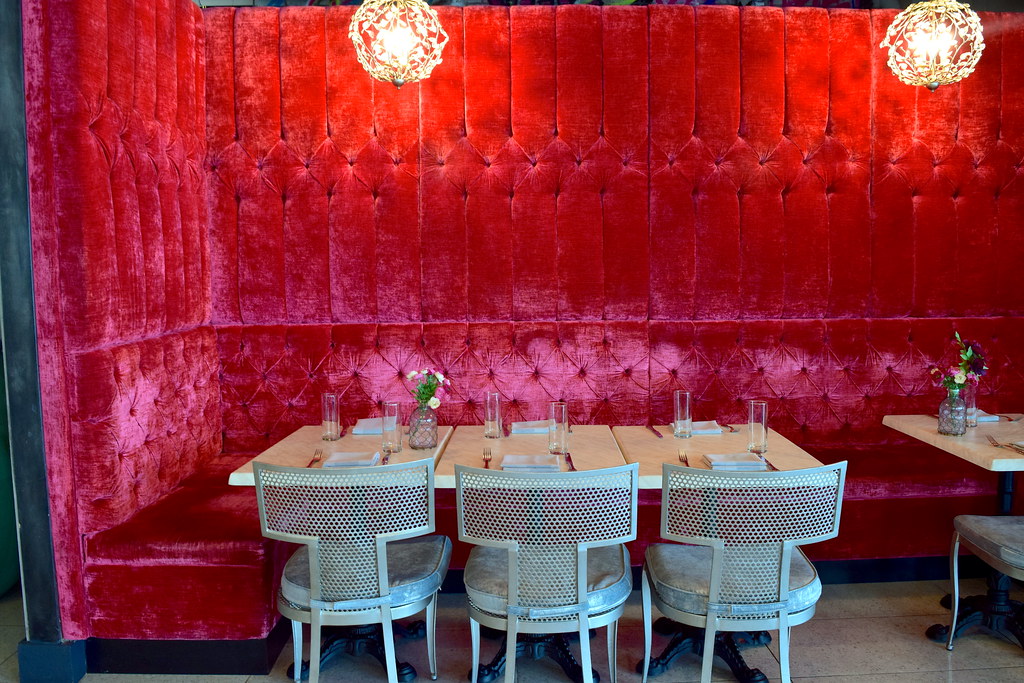 A buffet is what it is. We would never recommend a buffet over an à la carte brunch because the laws of freshness, proper seasoning, and portion control are seldom abided by. But in this free-zone, we took a pass. In addition to the buffet’s labels, the brunch menu is described in an adequate amount of detail for patrons to determine their plan of attack. The Mediterranean fare is by no means authentic island cuisine, but the buffet is consistent in theme. All the food tastes fine, and the options are sure to please a crowd. The winners include shakshuka, the crepe stations, dips, spreads, and seasoned platters of crudites and charcuterie. The misfits of the assembly line include stale muffins and bread items, overcooked pasta, and unseasoned frittatas. 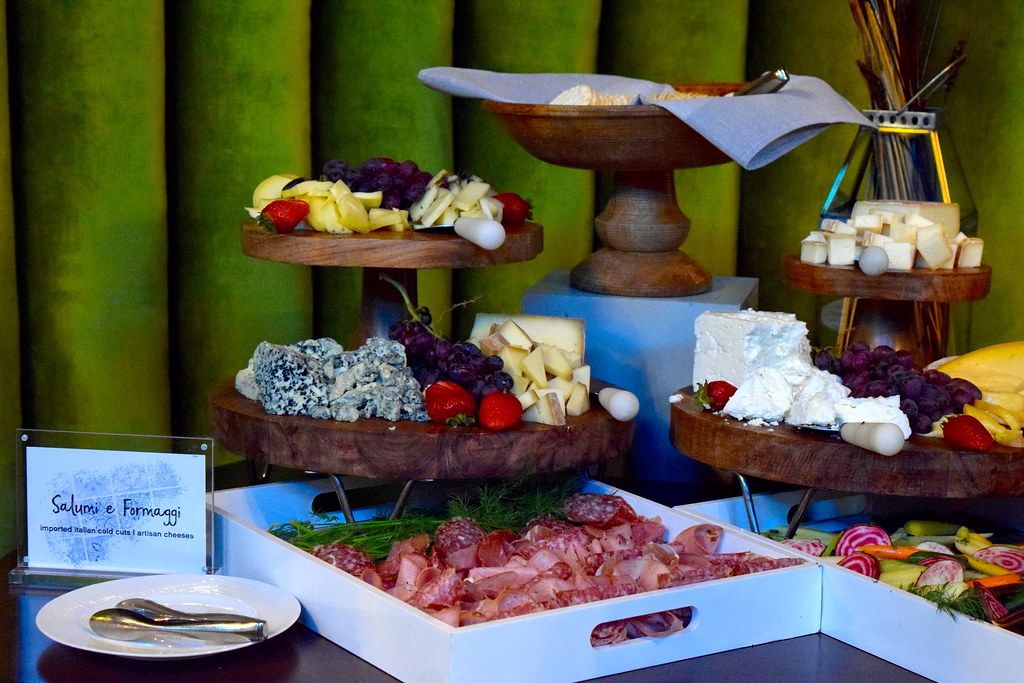 The wins all went together to create a coast-inspired feast. We found the shakshuka to be surprisingly balanced between acid and spice. It even maintained a perfect temperature, with neither ruptured nor dried out egg yolks. The crepes were lightly crispy and as simple as you’d want them to be. The dips, spreads, and platters were beautifully assembled to and seemed to be fresh and of high quality. 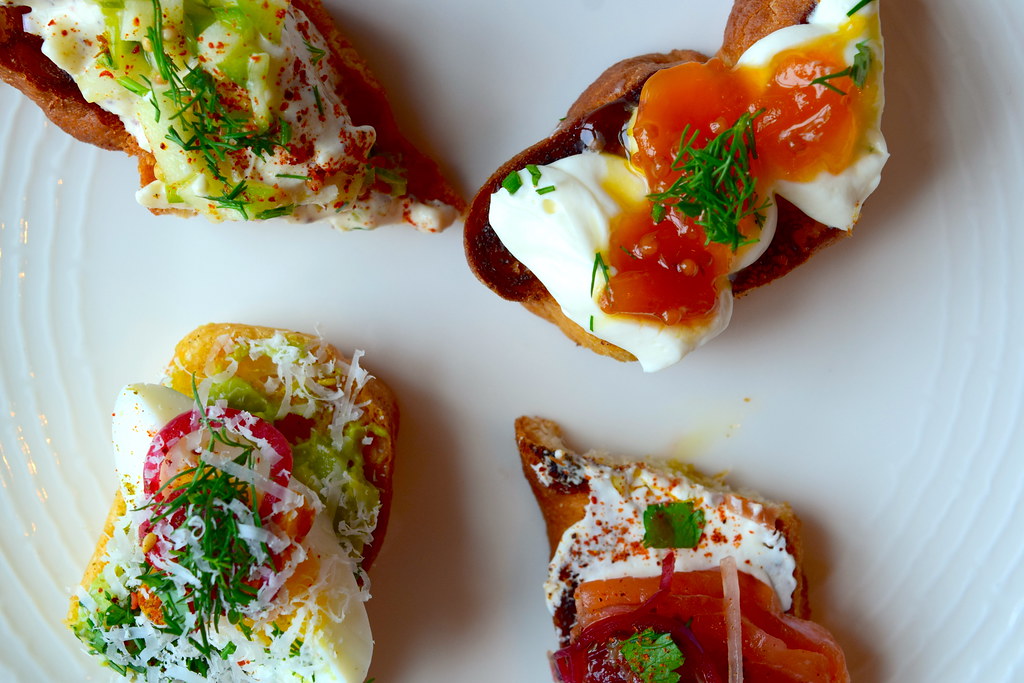 In addition to the brunch buffet, La Vie offers a toast service where servers come around with specialty toasts of lox, egg and avocado, ricotta and jam, and crab salad varieties. The concept is slightly odd, mismatched, and seems like it wasn’t fully thought out. There’s no additional plate for your special toast to shine – it’s forced to mix with the hodgepodge of food items already taking up all the white space. Operational components aside, these toasts were very attractive and some of the tastier items offered during brunch at La Vie. All were garnished with fresh herbs and had multiple fatty, silky textural elements that we consistently rely on for brunch. 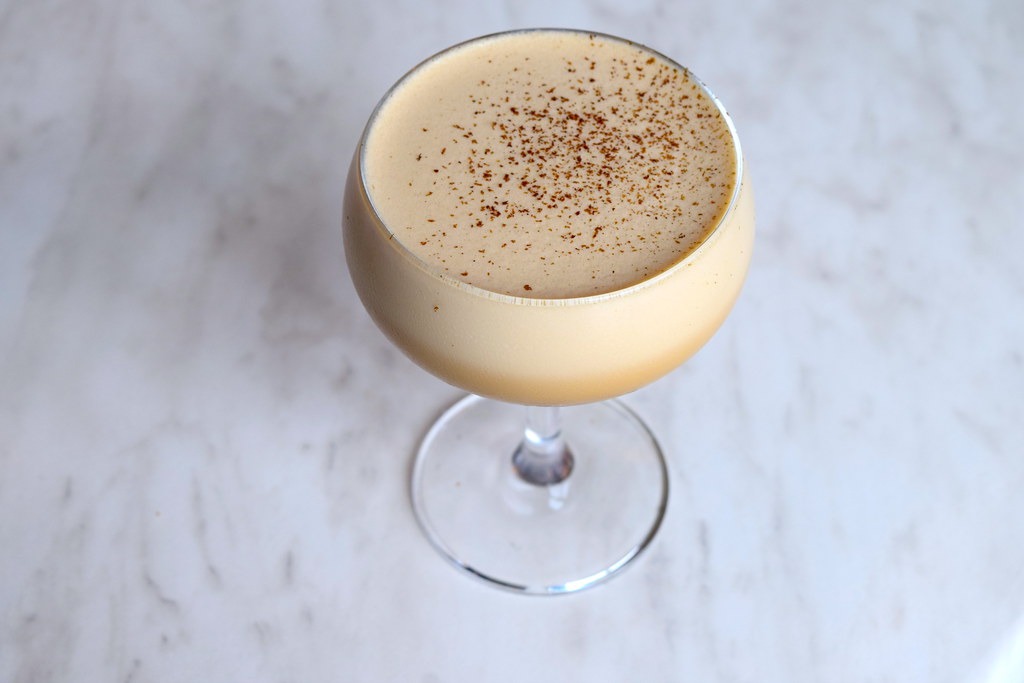 Our cocktails came out at a rather lackadaisical pace, which was concerning considering the space wasn’t full. At face-value, though, the drinks impressed us. The espresso martini was frothy, not overly-sweetened, and presented in a right-sized coup. You definitely can’t drink more than one of these, though we’d be impressed if you did. 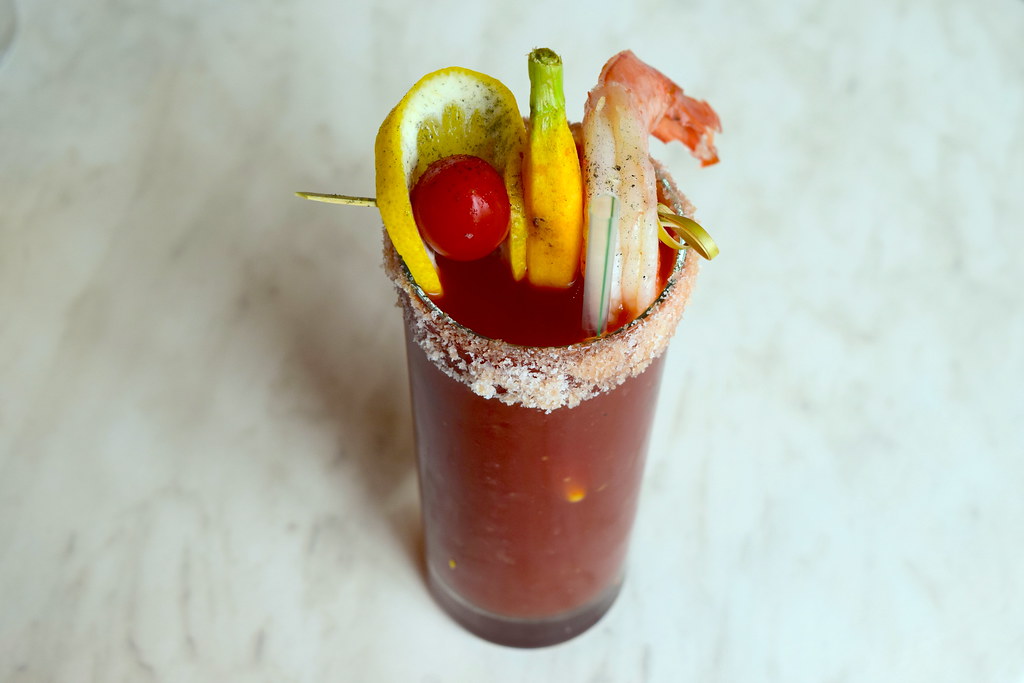 The bloody Mary had a touch of cognac resulting in a maltier, more balanced bloody than those abrasively acidic ones we often encounter. The accouterments were fun and interesting, but not overly bombastic. They also offer a seasonal cocktail, and its proceeds go to charity. Ours – for breast cancer fundraising – was a tequila-based drink with hibiscus foam. The drink changed as we sipped through the foam to encounter a chilling, tart, alcohol-forward liquid in the underbelly of the cocktail. 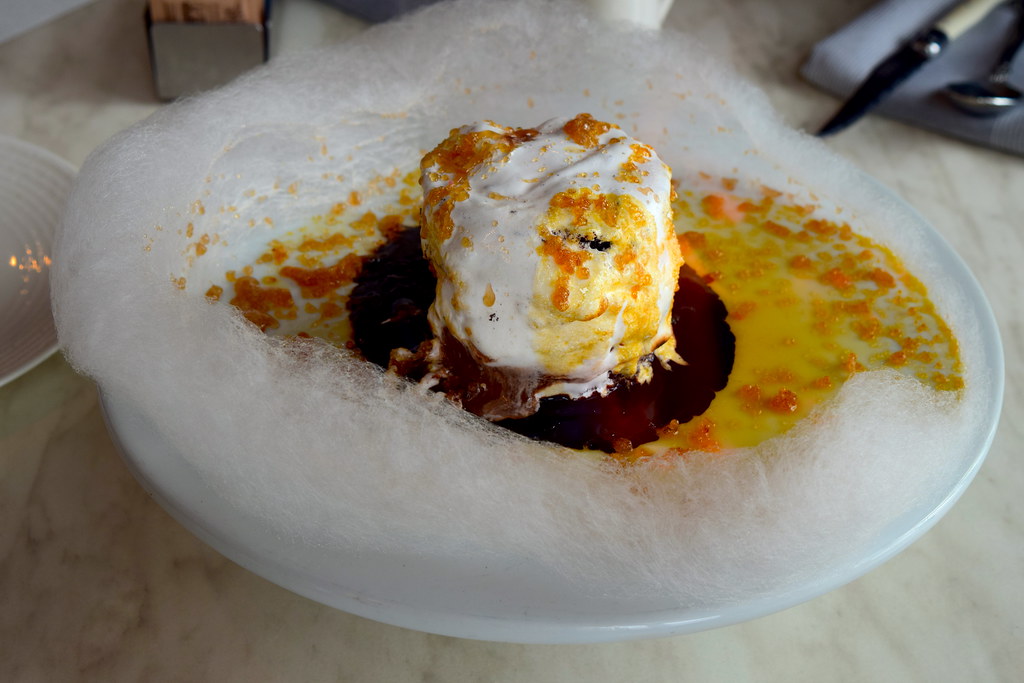 Dessert is fun here. The La Vie cruise ship staff really know how to put on a show. The La Vie baked Alaska is a huge cotton candy afro that is lit on fire to then be melted down to unveil a meringue-coated ice cream cake. The pastry department here did good work: the entirety of the decadent dish was devoured. Sorbets and other sweets are also available for ordering upon request. 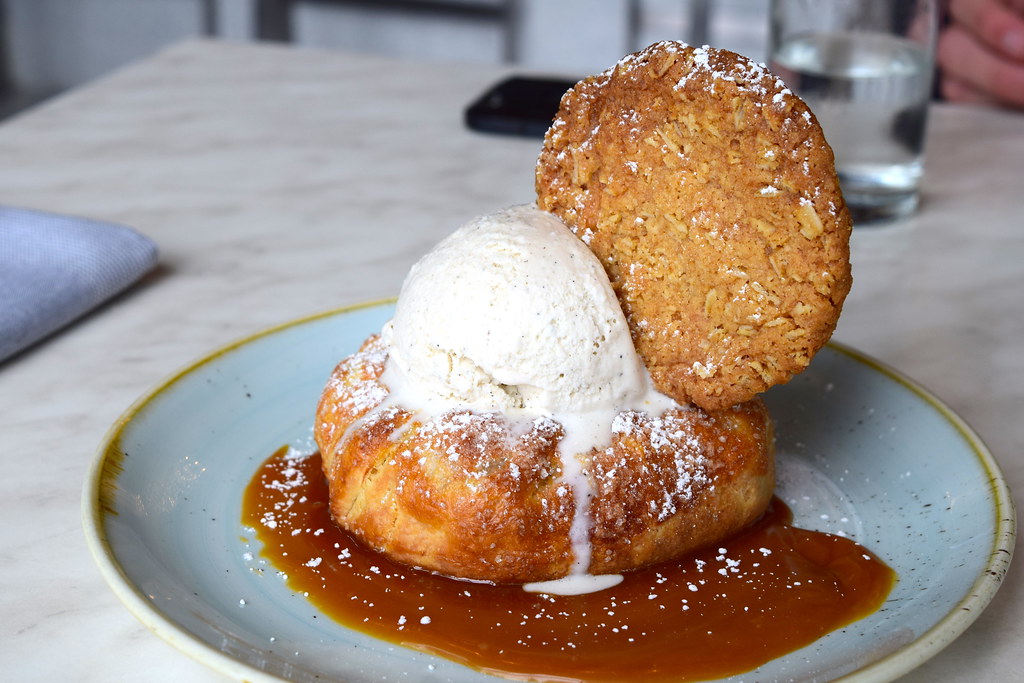 We may have had to be rolled to the exit, but we weren’t wrecking balls on our way out. Brunch is pleasant at La Vie. This spot has the potential to serve an adequate à la carte experience. But if your ideal brunch plan is to sit for multiple hours, pace out rounds of Mediterranean mezze, and sip on several cocktails, then La Vie is a good brunch for you and your crew – and it’s cheaper than any cruise line Expedia can find you. So, come sail away. Tom doesn’t want to go on vacation with you anyhow.