Recently, my roommates and I spent the day roaming around Brooklyn and decided to fuel up with a brunch at La Vara. A fan of tapas style meals (why have one thing when you can have seven?), I was particularly excited to try this restaurant – especially after discovering it made the 2018 Michelin Guide. 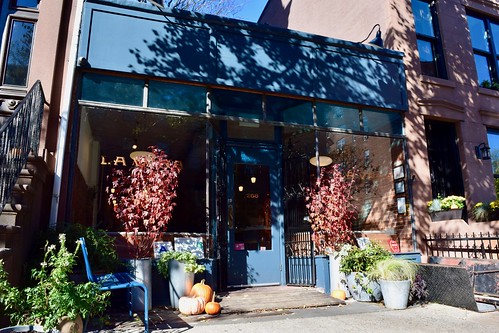 According to the website, “La Vara celebrates the Jewish and Moorish legacies in regional Spanish cuisine.” This style is evident in the decor of the place; minimalist with touches of traditional Spanish (ie. Moorish) architecture. Overall, the space isn’t largely adorned, but the bar is a gorgeous marble and the exposed brick feels sophisticated. 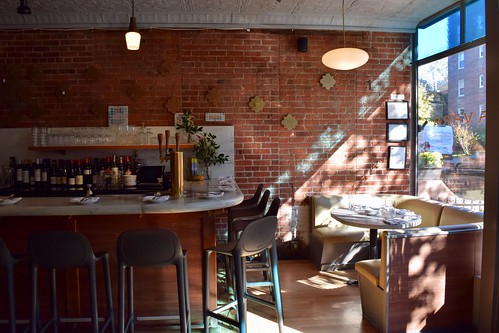 Speaking of the bar, I began – of course – with a drink. After confirming it was more spiced than spicy, I ordered the bloody Mary. I would describe this bloody as savory, thanks to the inclusion of vinegar. It also came with an anchovy that I immediately passed off to my roommate Renee. While it was delicious and unique for the first few sips, I confess I could not finish it. It could almost have been a tapa itself (a gazpacho, perhaps?) because the flavor was so strong. 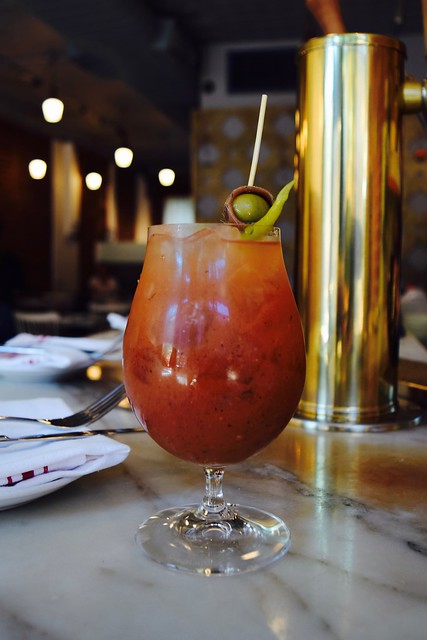 To begin, we ordered the nuestra bravas potatoes in a spicy aioli sauce. Bravas are a staple among tapas and for me they are always a must-order. These were crispy and delicious – not too spicy for my mild palate, and were gone from the table rather quickly. 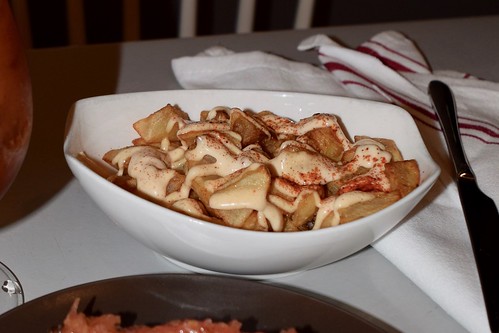 We followed up the bravas with the pan amb tomaca, La Vara’s take on a pan con tomate (bread with tomato). It was light and fresh, dressed simply with sea salt. The perfect complement to the heavier potatoes. We also had the tortilla de calabacín, a traditional Spanish egg and potato tortilla plus zucchini, leeks, and mint. I admit, I didn’t much taste the leeks or mint but the zucchini was a fun twist on this classic. That said, it was a bit bland in the aftermath of the potatoes and definitely needed salt. 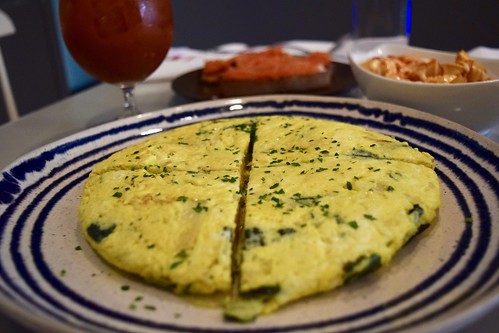 For the second round of tapas, we had cuchifrito. The potato and lamb hash came with two with poached eggs and ajo cabiñil sauce. As I am all about the ooze, I am happy to report these eggs were poached to perfection. That said, if you’re not a fan of lamb, this is not the dish for you. 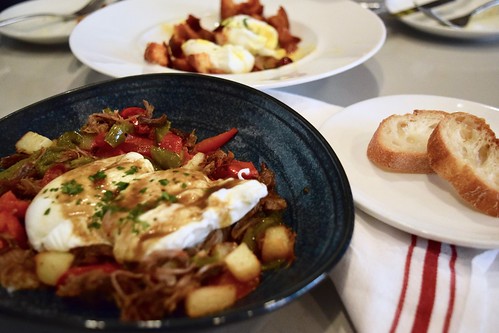 The star of the show, of course, came last: huevos con migas aragonesas. This dish was a delicious marriage of toasted bread, chorizo, and – surprisingly – grapes! It was topped with two poached eggs. The contrast of sweet grapes and spicy chorizo, plus the crunch of the bread made for a delicious mouthful. And the egg yolk was there to corral all the flavors together. The roomies and I agreed, this dish was hands down our favorite.

While everything was presented beautifully, I found myself hoping for a little more “wow” factor. Sadly, I don’t think a return visit is in the cards.

Despite its many accolades, La Vara misses the mark on brunch. Perhaps this spot is best reserved for dinners.
La Vara serves brunch Saturday and Sunday from 11:30 a.m. to 3 p.m.