In New York, we have the (culinary) world at our fingertips so why is it so hard to find awesome Mexican food? I’ve certainly had my share of delicious bites over the years, but I’ve had to fight through the thorns to get to the roses, or through the cactus needles rather. 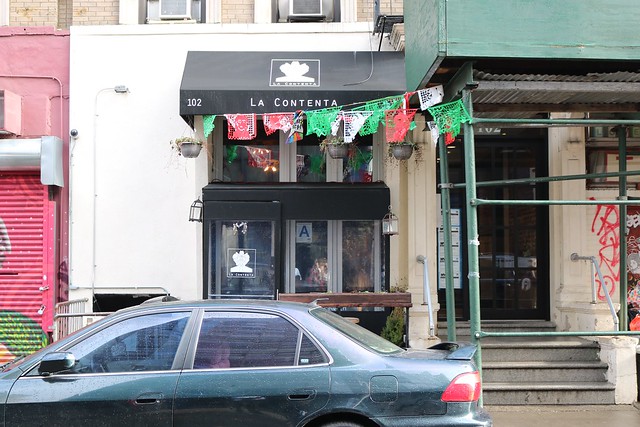 When we were recently invited in to try the brunch menu at La Contenta in the Lower East Side, I jumped at the chance to sample more of my favorite cuisine. I brought along my boyfriend Robert; as a native Californian, he has a discerning palate when it comes to Mexican fare and I trust his judgment.

La Contenta is tucked away on Norfolk Street right off of Delancey and was bustling on a Sunday afternoon. The restaurant is tiny –maybe about six tables or so—and every seat was filled including the bar. As we settled in, we soaked up the lively, authentic ambiance. I particularly loved the brightly colored accents and Day of the Dead-inspired décor. 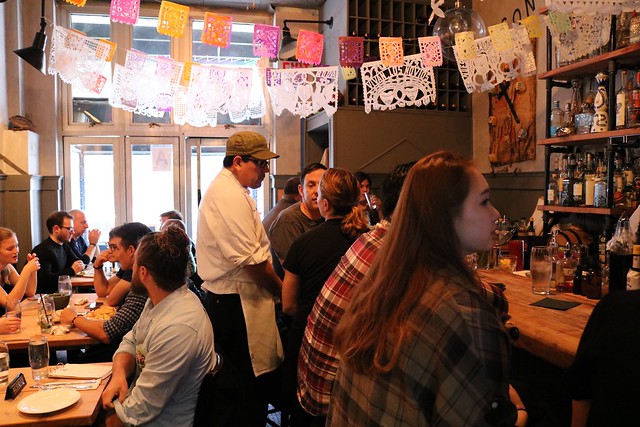 In anticipation of the Sunday Scaries, we both agreed that cocktails were a must. La Contenta offers five brunch-specific cocktails as well as the full drink menu, which includes Mexican beers and plenty of tequila-centric concoctions. 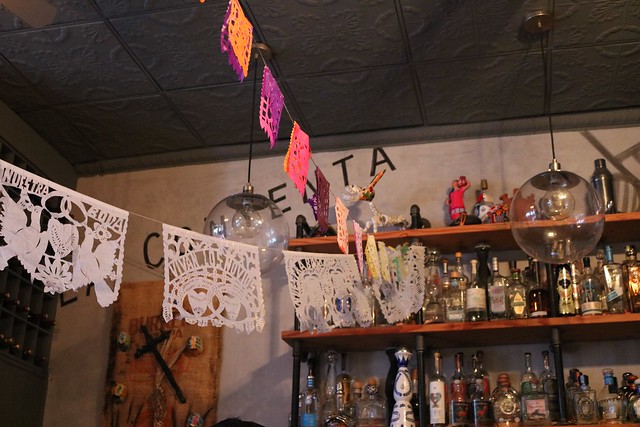 Robert approved of the Bloody Maria, basically a Bloody Mary with tequila rather than vodka, and commented that the housemade mix was enjoyably zesty but not too overwhelming. Sometimes restaurants err on the side of too spicy, which can drown out the other flavors in the drink. 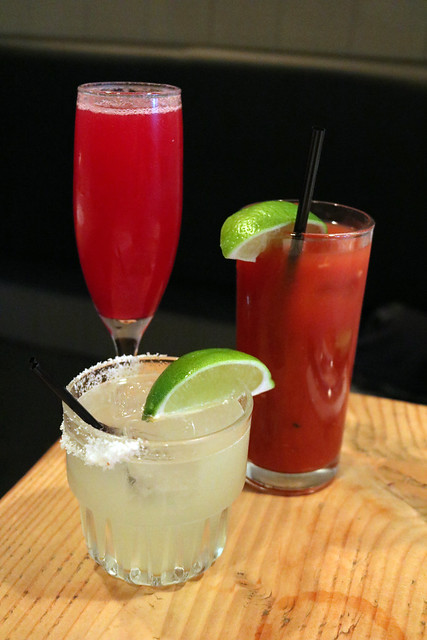 As a mimosa lover, I tried out the Mirosa, a mix of sparkling wine, prickly pear puree, and a hibiscus tea reduction. I appreciated the unique twist on the typical mimosa, although it was too sweet for me to have more than one.

After our first round, we both switched to the classic margarita to complement our food. The margarita uses fresh lime and lemon juice, rather than a sugary mix. I love myself a “skinny” marg! 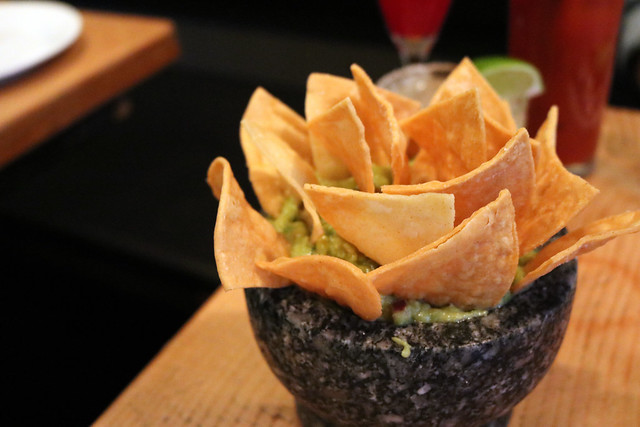 Along with our cocktails, we started our meal with the guacamole tradicional. It was great to dictate our spice level (extra spicy, obviously) and this was an easy appetizer to graze on as we surveyed the menu. The guacamole was fresh and flavorful. 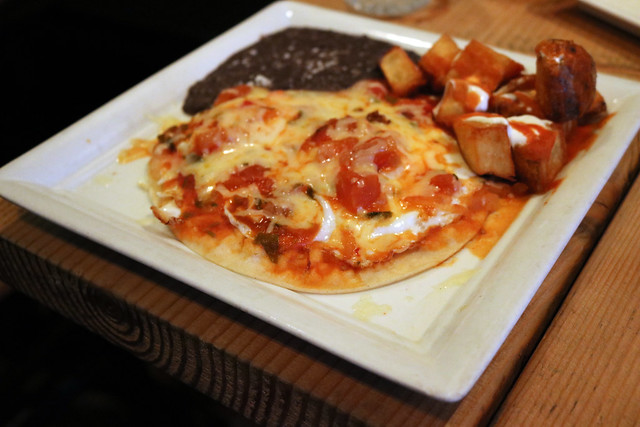 We came to brunch with an appetite so we split three main dishes. First up was the huevos rancheros, served classically on a tortilla with tomato-chili sauce. This dish was surprisingly on the lighter side, which was lucky since we had a few more entrees en route. The eggs were well cooked, but we both wished for a zippier sauce. The flavor was easily remedied by a sprinkling of hot sauce. 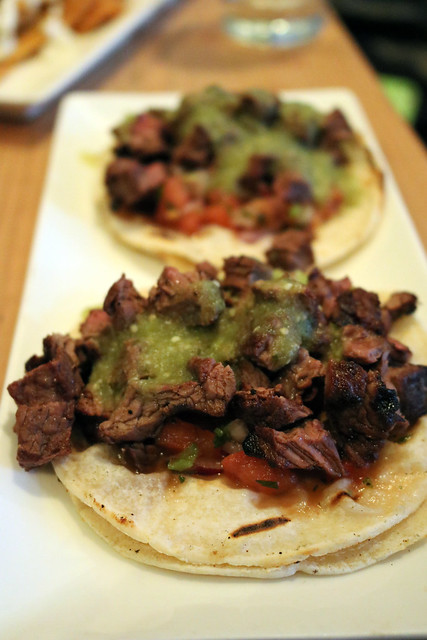 Next we dug into the tacos de carnes asada. I was curious to get Robert’s feedback on this dish in particular because I do think he may like tacos more than he likes me, which I’m perfectly happy with. He gave the tacos a thumbs up, which is a rare feat. The standouts of the dish were the juicy steak and homemade tomatillo salsa. He could have gone for round two, but had a little self control. 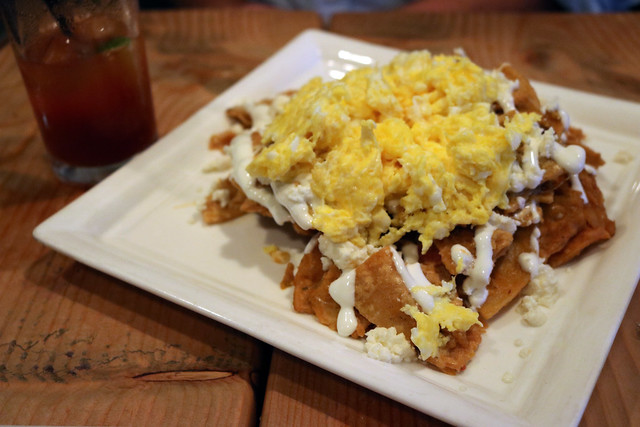 Finally, we tried the chilaquiles. Robert isn’t much of a chilaquiles fan, but I overrode the decision. Who doesn’t like breakfast nachos?! The chilaquiles were topped with a generous portion of scrambled eggs and sauce, although I wish there were some more toppings like avocado or fresh jalepenos. This dish was greasy in a good way and hit the spot, no wonder it is known as a hangover cure. We continued to pick at the tortilla chips as we polished off our margaritas and deliberated on the rest of the afternoon’s agenda.

Our general consensus was that all of the food was tasty, but could have benefitted from bolder flavors. You come to a Mexican meal expecting dishes that pack a punch, and we found that some brunch items could have turned up the heat.

The Bitches say: C+. Above average, authentic Mexican fare in a lively, intimate LES locale. We enjoyed the creativity on the brunch menu, but yearned for a touch more flavor.

La Contenta serves brunch on Saturdays and Sundays from 11 a.m. until 4 p.m.