I had plans later that afternoon that required me to stay sober this St. Patrick’s Day, but I wanted to celebrate with my friends and catch up with all of them before the celebratory drinking began. I started my search by looking for a spot where we 1) wouldn’t have too much trouble finding a table for enough people, 2) would be somewhere away from downtown, but not too far and 3) could find ample parking. 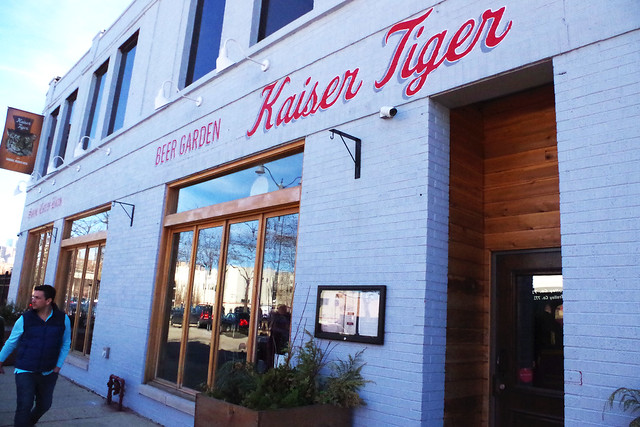 Thankfully, I started brainstorming early, and stumbled upon Kaiser Tiger in the West Loop. I had only ever been to Kaiser Tiger when it was warm outside, and I had been able to enjoy giant Jenga and bocce ball. With the Chicago March weather, it was too chilly to play those games, but I knew Kaiser Tiger would otherwise fit the bill for our brunch festivities.

I arrived at 11 a.m. and first met with Sarah and Britt, as they were the first to arrive of the bunch. Next rolled in Ali and Adam, and finally Ashley—it was nice to have so many friends in one place. 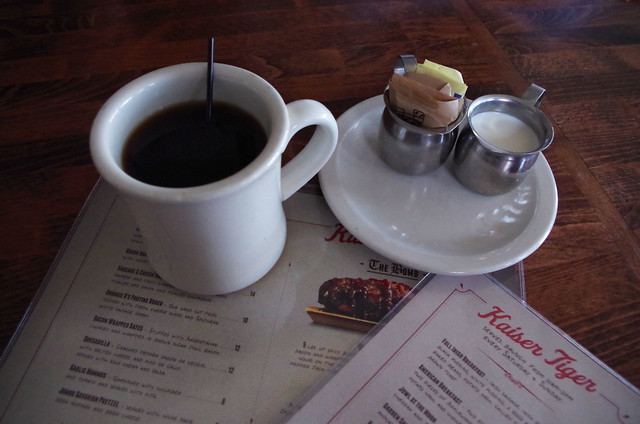 As friends started to slowly roll in, the drink orders rolled in too! Ali, Adam, and I started with coffee. The coffee was a strong, bold flavor, but almost tasted burnt. I wasn’t a huge fan. Ultimately, I had to suffer through and drink it, as I wasn’t going to be drinking at all this brunch — water and coffee were my only options. 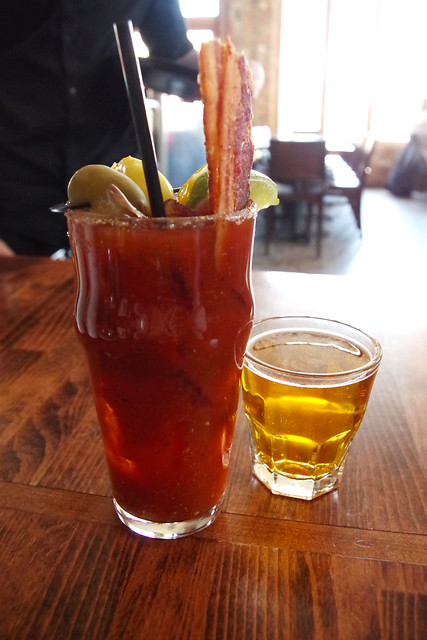 Sarah, and Britt ordered Bloody Marys, which arrived with a beer back and lots of accessories to top off the glass. With a skewer of bacon and olives, and a spiced rim, it was an intricate drink and was a delicious blend of vodka and mix. Considering that Kaiser Tiger is known for its beverage selection I wasn’t surprised that the libations were on point. 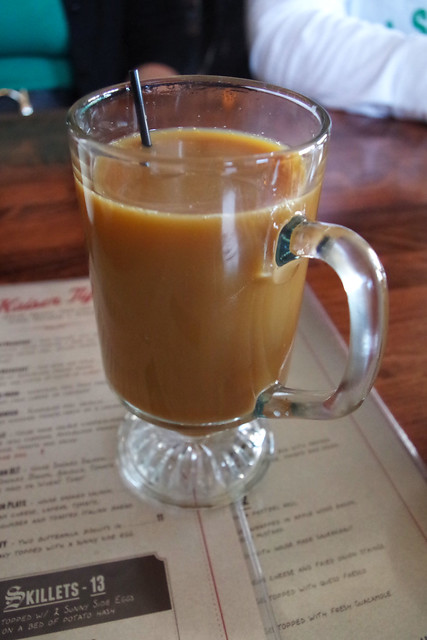 Ashley decided to start the party with an Irish coffee with Baileys Irish cream. It was not a fancy cocktail in the least but it has the two things Ashley was looking for: alcohol and caffeine. The drink was a perfect combination of Bailey’s Irish Cream and coffee. It was a classic Irish Coffee to celebrate St. Patrick’s Day. After eyeing the Bloody Mary Sarah had ordered, she decided on that after her Irish coffee was finished. 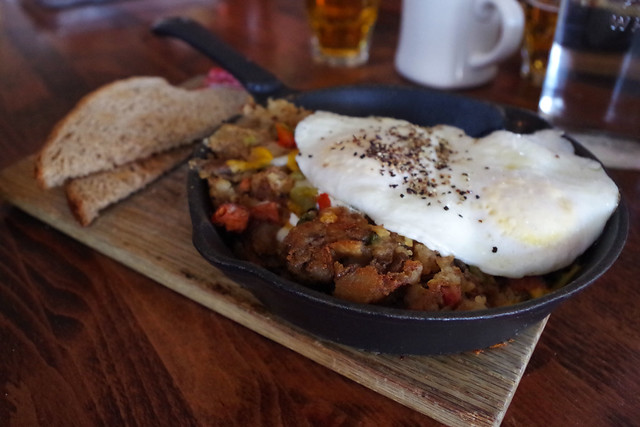 Next up were the entrees! Sarah and Britt chose the sausage and cheese skillet. It was a dish full of spicy Argentinian chorizo, pepperjack cheese, roasted red pepper, jalapeño, onion, pico de gallo, and a tequila sour cream. The menu warned that this dish was spicy, but it took Sarah and Britt by surprise. The two of them stated that they enjoyed the dish, but next time would order it without the jalapeño peppers, as they were too much. It was cheesy and eggy, but just too spicy for these two ladies. 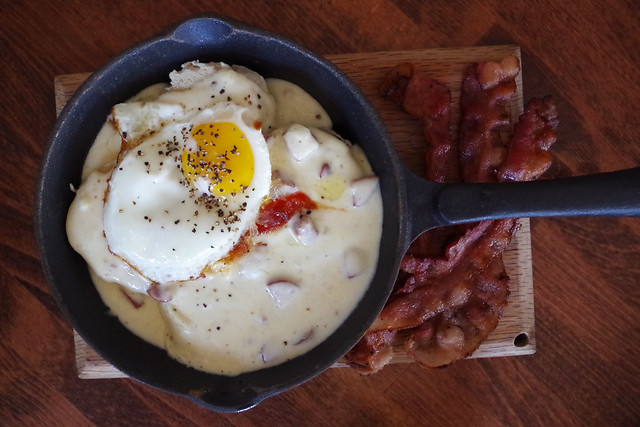 Ashley opted for the biscuits and gravy. The dish had two buttermilk biscuits in chorizo gravy topped with a sunny side egg. The dish was well proportioned, but was too mild and void of flavor for Ashley’s liking. She had wished there was a bit more zest and spice to it. The gravy was chorizo based, which inclined Ashley to believe that the dish would have some pep but it was quite mild. The bland dish needed a kick. The biscuits were good, flaky and buttery but certainly didn’t add any flavor. 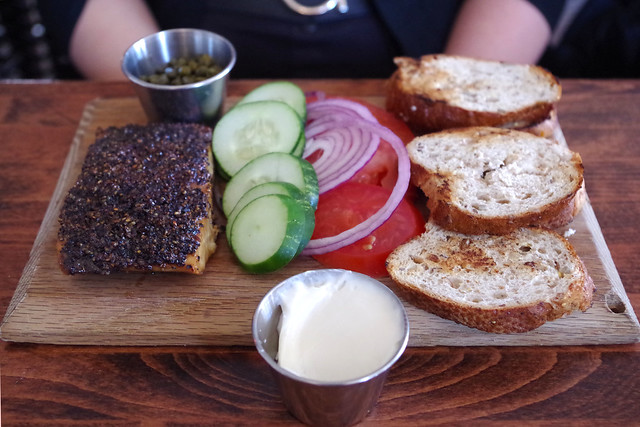 Ali went for a lighter dish and chose the salmon plate with salmon, whipped cream cheese, tomato, onion, red onion, cucumber, and capers with toasted Italian bread. Initially, when the plate was presented, she was taken aback as she was expecting smoked salmon. Instead, the dish came with a baked filet. She would have preferred the smoked salmon, but the fillet was flavorful and delicious. The dish was a good, light option, and there were plenty of ingredients for her to create lots of delicious customized bites. 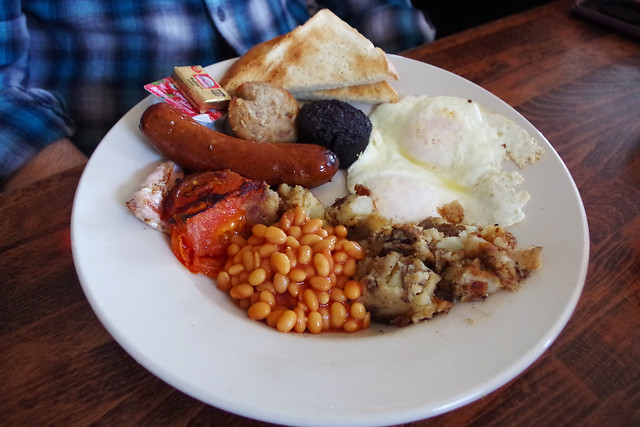 Adam went with the Irish breakfast, which was a standard dish of eggs, Irish sausage, Irish bacon, white pudding, baked beans, potato hash, grilled tomato, and brown toast. It was certainly a meat-centric dish, and he enjoyed it, but was disappointed that some of the elements to the dish were cold when they reached the table. But with that kind of variety, I imagine it’s hard to plate that dish quickly. 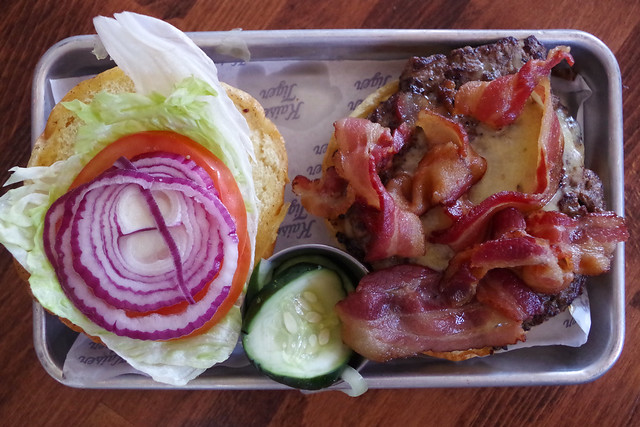 I opted for the Kaiser Royale, which is the breakfast cheeseburger on the menu. The Kaiser Royale is a house made double cheeseburger with mature Irish cheddar, Applewood smoked bacon, lettuce, tomato, and onion. I was disappointed by this burger as it was dry and a bit overcooked for my liking. The bun was also a bit too large, and biting into the whole burger was hard to do. 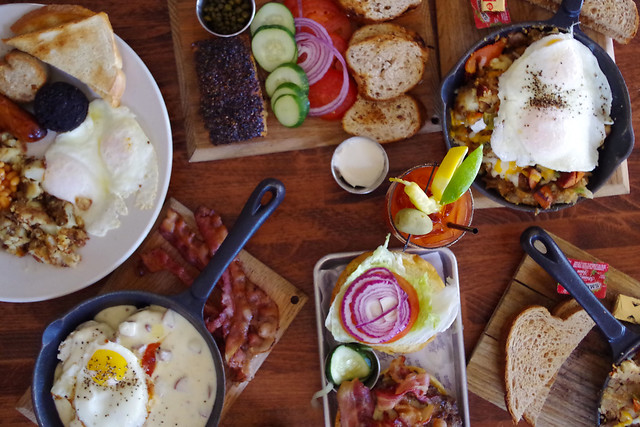 While I was happy to find a brunch spot where parking was easy, had a lot of space, and was far enough away from downtown, but the food was simply not desirable. The service we had was good, but for all of us to not be pleased with our meals says something about the menu.

The Bitches say: D-. The only saving grace for Kaiser Tiger were its drinks, but that’s what one should expect for a sports bar with lots of games and a party-centric atmosphere.

Kaiser Tiger serves brunch on Saturdays and Sundays from 11 a.m. to 3 p.m.