Wedding planning comes with its perks (catering tastings) and its downfalls (obtaining and categorizing 275 mailing addresses). Another spectacularly fun activity that goes hand-in-hand with wedding festivities? Brunch with your bridesmaids.

On a rainy Saturday my gal pals and I scurried across the cobblestone street into Kafe Leopold, a discrete European cafe tucked away in Georgetown’s Cady’s Alley. 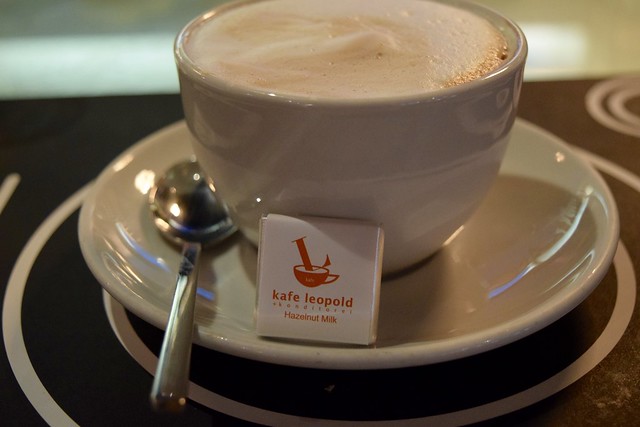 Kafe Leopold doesn’t take reservations, so we prayed to the Brunch Gods as we elbowed our way through the umbrella laden entryway, that we would be seated in time to make our 2 p.m. Hitched appointment. Fortunately, we were quoted a mere 20-minute wait. We happily posted up at the minimal white lacquer bar and ordered cappuccinos. Luckily, the cappuccinos came with a small chocolate square, as we were all getting hangry. And, just as we finished our last sips, we were told our table was ready.

Kafe Leopold is a chic, simple space, with pops of orange that will wake you up on a rainy Saturday. Unsurprisingly, the area comprises small cafe-style tables, so as a party of four, our table was already a bit tight. 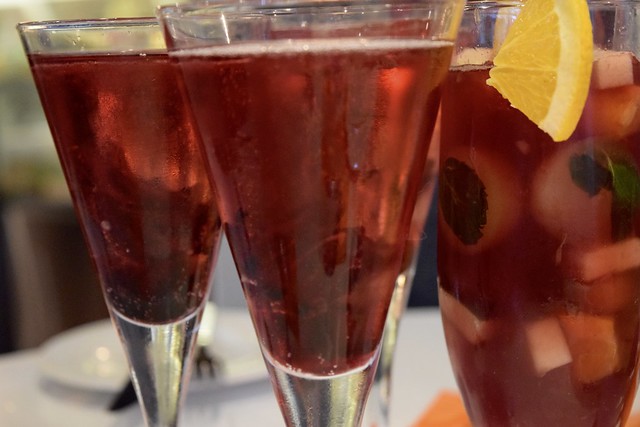 We couldn’t help but notice several beautiful glasses stuffed with fresh fruit, accompanied by small pitchers of sangria, being carried by the wait staff out of the kitchen. We learned they were a house favorite, so we promptly ordered two. We also ordered two glasses of the hibiscus prosecco, because flowers, for spring, am I right? 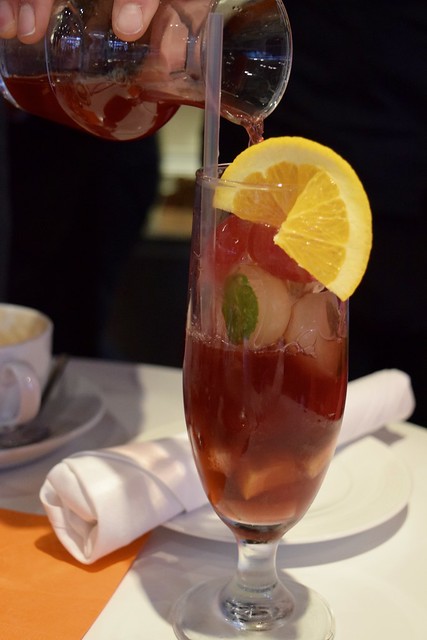 It’s a good thing we saw the avocado toast pass by, because I probably would have breezed right past “Zwei Weiche Eier” on the verbose menu. We decided to start with an order of the avocado toast and the Grunkohlsalat—otherwise known as kale salad. Unfortunately, they arrived at the same time as our entrees, turning our small table into a game of Tetris as we tried to accommodate everyone’s dishes.

I should have stuck with the avocado toast as my entree. It was presented beautifully, with a little jar of poached eggs on the side. Moreover, it was toasted so much that we couldn’t cut it without knocking over a hibiscus prosecco or shaking the entire table. I made an executive decision to smear the poached egg on the toast, and we all went in for bites. While I wouldn’t recommend sharing this dish, we liked how Kafe Leopold converted avocado toast into a full entree. Bonus: it came with a side of crispy bacon. 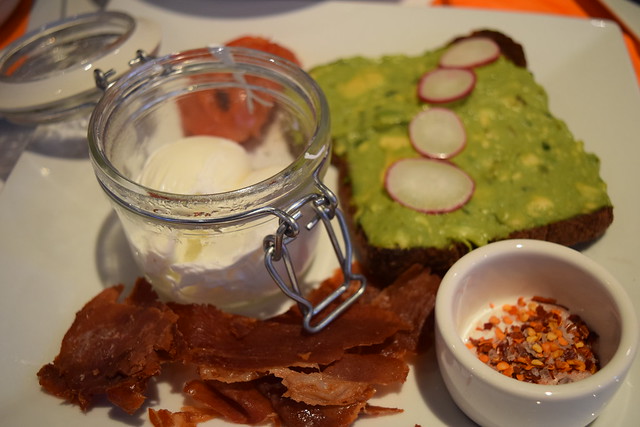 The Grunkohlsalat was a shaved kale salad with pine nuts, Parmesan, currants, garlic chips, and a lemon-olive oil dressing. We are suckers for shredded kale—for some reason it just tastes better!—so this salad was gone in five minutes. 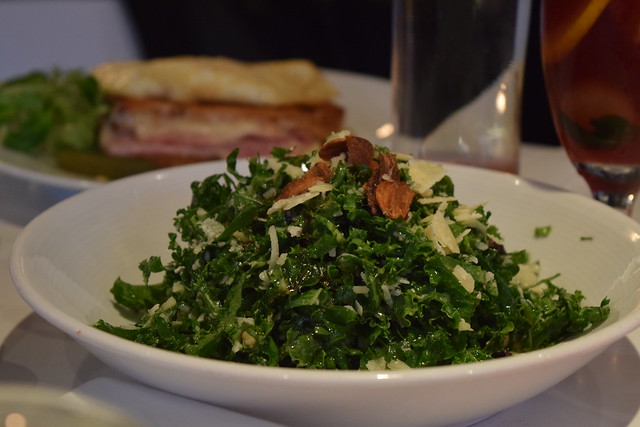 Lauren and Kendra tried the Croque Madame which came exactly how you would expect: two eggs over easy, on a ham-and-cheese sandwich, there was no shortage of ham. Not usually a fan of mustard, Kendra commented that she liked the taste of it on this sandwich and could tell it was “the fancy kind.” Yep, Europeans don’t use French’s, that’s for certain. 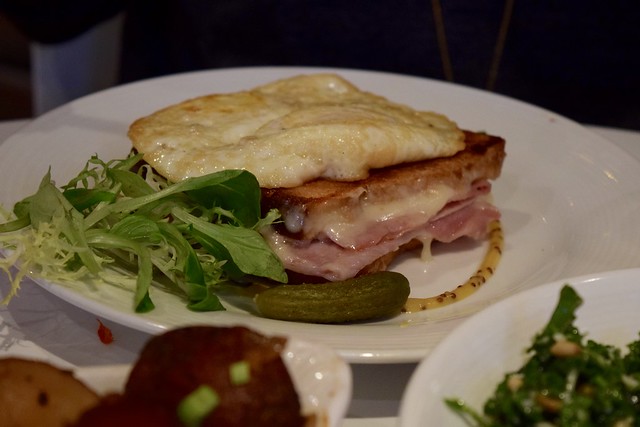 Alas, my tartine was the saddest, soggiest entree of the bunch. I’m not one to shy away from mushrooms, but mylanta! I could barely find the bread! Even if you like mushrooms, this was literally a plate of pan-seared, herbed mushrooms over melted cheese on a small, limp piece of baguette. Not to mention, the size of the plate was unnecessarily large for a table that was already lacking in space. 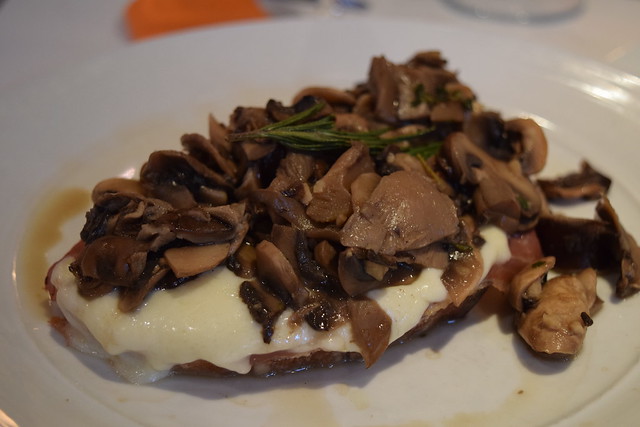 Out of left field, but not out of character, Christina ordered the sausage and spaetzle entree, which ended up being our favorite dish. Served in a skillet, this concoction tasted like a savory bread pudding consisted of German gnocchi in a creamy sausage sauce. As if that wasn’t enough, it was topped with a fried egg and bread. It was decadent, but not huge, so it was a good dish to share. 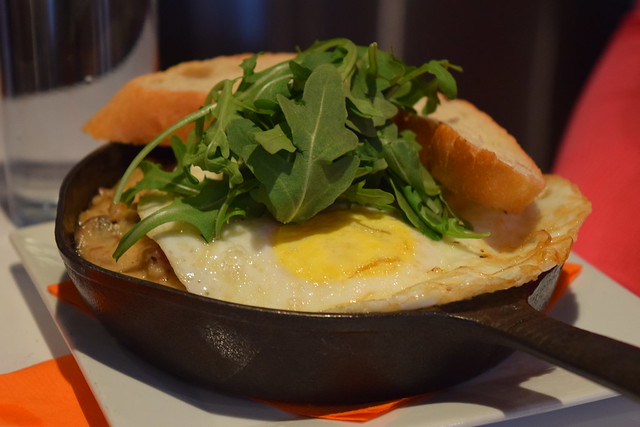 With 20 minutes to spare, we decided we would be remiss to leave Leopold’s without sampling dessert from the display that had been staring at us for the past hour. Kendra was seated closest to the selection, so we empowered her to choose our fate. She didn’t disappoint and brought back delicious mini fruit tarts and hazelnuts bonbons. Our decadent brunch was the perfect pre-game to bridesmaid dress shopping (said no one ever). 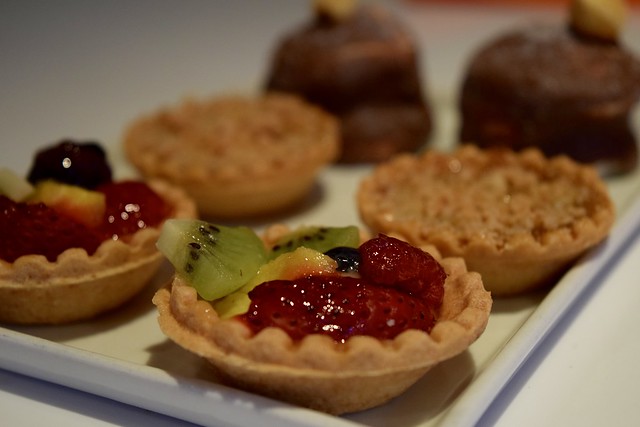 The Bitches say: B+. Kafe Leopold is a quaint cafe with an extensive international menu and patio seating. If you’re looking to get away from the hustle and bustle of M Street, Kafe Leopold is the perfect retreat.

One thought on “Kafe Leopold Brunch”