You know those places you see on Instagram—the ones you dream about, but aren’t sure you’ll ever see in person? You know what I’m talking about: those little huts over perched over a still blue ocean in the Maldives, the jaw-dropping islands of the Phillippinnes, the Northern lights in Iceland. Those pictures you save on Instagram and Pinterest, they’re the places you dream about while scrolling through Instagram before you fall asleep.

For me, one of these sights is Bondi Beach in Sydney. Specifically, the image of a gorgeous blue lap pool that seemingly blends into the ocean beneath it. It turns out, the name of that gorgeous pool is Iceberg’s—and would happen to be just neighborhood public lap pool, if you were fortunate enough to live near Bondi Beach in Sydney.

I found myself in Sydney, by way of Melbourne, around the New Year’s holiday, with my Australian boyfriend. Naturally, we planned to brunch at Iceberg’s to start off a day of brunching, sunbathing, and sightseeing in Bondi Beach.

The Iceberg’s pool, recreation center, and restaurant lie on Bondi Beach, which has some of the most expensive real estate prices in Sydney—and in the world. At the top of this multi-level building, which is built into a cliff and houses the pool on its ground floor, lies its namesake restaurant. 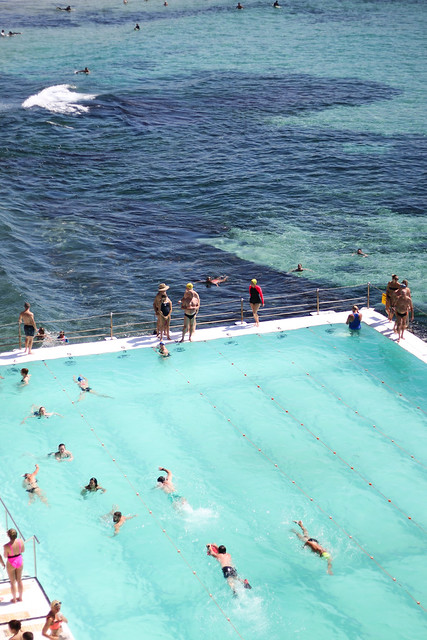 A reservation at Iceberg’s Sunday brunch is hard to come by—there are several times seatings throughout the day, and it is best to reserve far in advance. 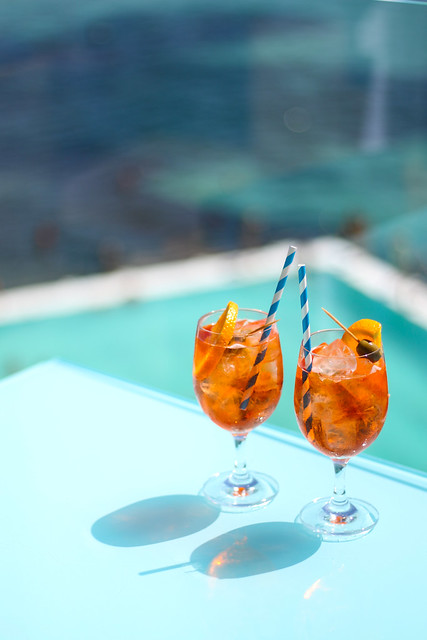 Upon arrival, it was very clear that Iceberg’s was the place to see and be seen for locals and tourists in Sydney alike. The beautiful people were stylishly dressed and brunching in groups, ranging from large parties of ladies who brunch to moms and daughters on holiday. Sydney reminds me a lot of New York, in that the city’s industries are heavily media, ad agencies, and finance—and there’s a big focus on style, fitness, and looks. Except for everyone in Sydney is much taller than me and pronounce their “As” differently.

The narrow restaurant is decorated in cool blues and whites to match the view, and has floor-to-ceiling windows and balconies through the restaurant to allow you to enjoy said view.

We had a great seat by a window, but my poor boyfriend was dying, as Sydney hit a cool 110 degrees that January day. Meanwhile, there was a blizzard in New York. 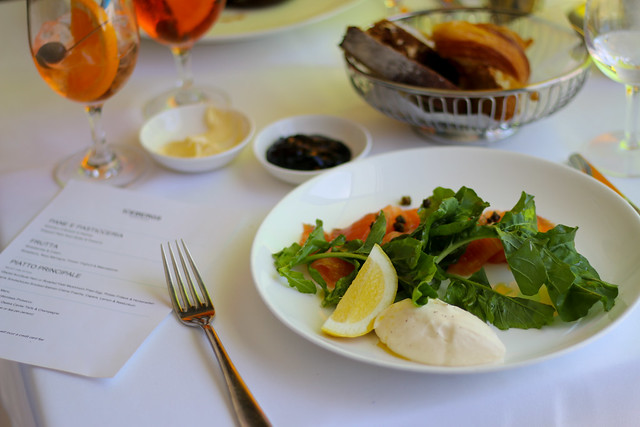 Brunch is a set menu of three courses for $55, which becomes $80 with bottomless prosecco, or $90 for the brunch with caviar and champagne. All options include coffee or tea. Cocktails are also available a la carte.

While the champagne and caviar option was certainly tempting, I’d been on an Aperol Spritz bender—opting for the bright pink-ish orange cocktail at any and all opportunities. I was on holiday, after all. The service was delightful and whisked two Spritzes to our table in a matter of moments. 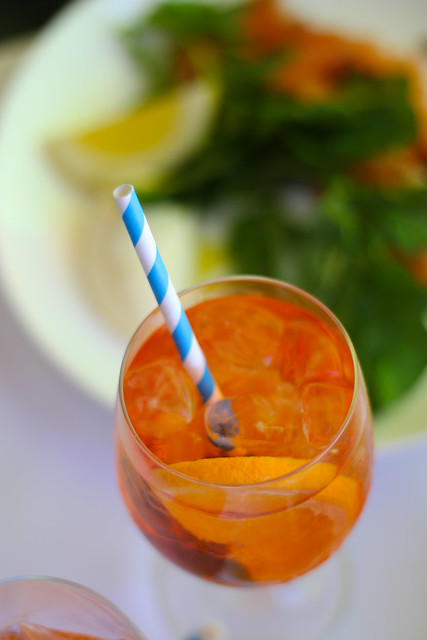 Then, a breathtaking basket of pastries was brought to our table, as our eyes widened and our jaws dropped. The pastries looked utterly divine—and while I try to avoid wheat and gluten, I could not resist. The almond croissant was marvelous; a buttery, flaky croissant filled with sweet almond paste. We both agreed it was really incredible—and we’ve both sampled pastries across the U.S., Europe, Latin America, Asia and, now, Australia. The banana bread was another strong contender: a dense, slice of classic banana bread, easily slathered with the accompanying whipped butter and preserves. 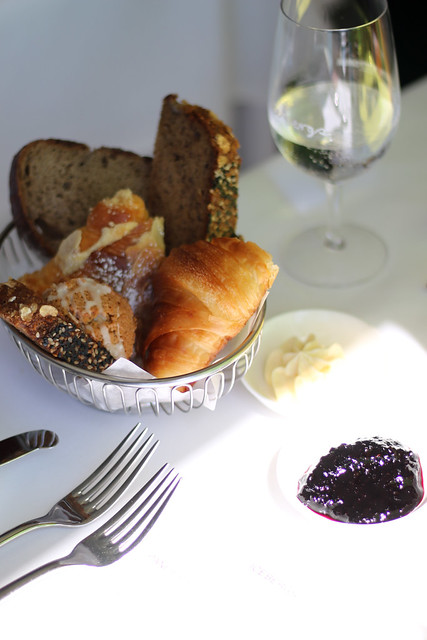 For the second course, a sweet treat of strawberries and cream, or strawberries with rose meringue, frozen yogurt and marscapone were the options. While they both sounded similar, we opted for the former, as it sounded less saccharine. What arrived was a pretty platter of strawberry slices with a sweet, fluffy cream. Here’s the kicker: the dish was topped with sprinkle-sized slices of Pavlova, a meringue-based dessert that’s named for Russian ballerina Anna Pavlova and is Australia’s unofficial dessert. The dessert was created in her honor after her 1920s tour to Australia and New Zealand, and my Aussie beau is genuinely obsessed with the dessert. Naturally, he was happier than a koala with eucalyptus. (We know, we met one earlier in the week.) 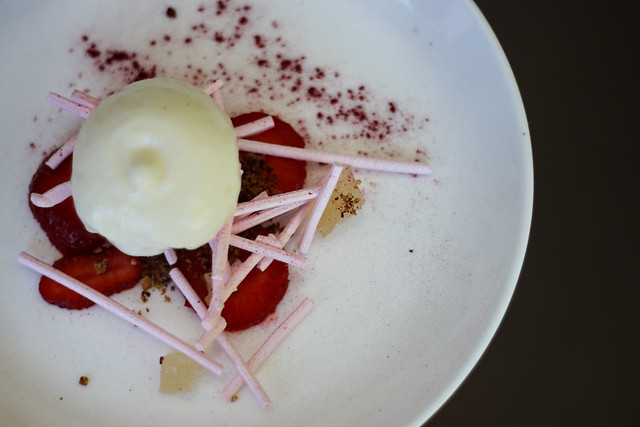 For the principal plate, you can select between a ham Benedict, a mushroom Benedict, or a salmon with crème fraiche. The salmon was incredibly fresh, and served with crème fraiche, capers, lemons and nasturtium, i.e. a leafy green a lot like arugula. The dish was fresh, light, and lovely, but we were both surprised to see it without eggs. I only wished there had been eggs! It’s hard to have a brunch dish without eggs, as far as this Bitch is concerned. But, maybe they do it differently in Australia. 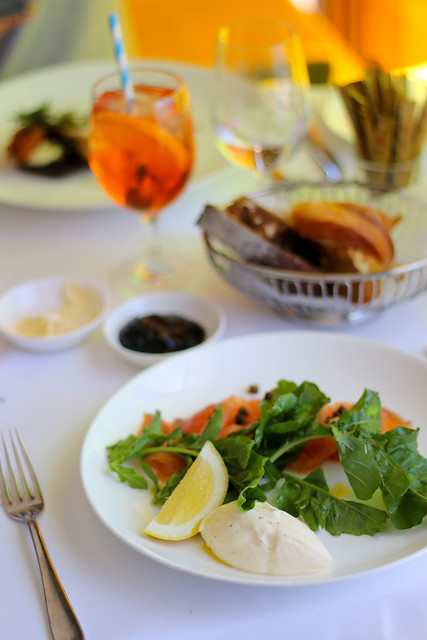 The roasted field mushrooms were served with potato fritters, horseradish, and a fried egg. The dish was beautifully presented—so rich and decadent. The fried egg was beautiful, and it was topped with microgreens. 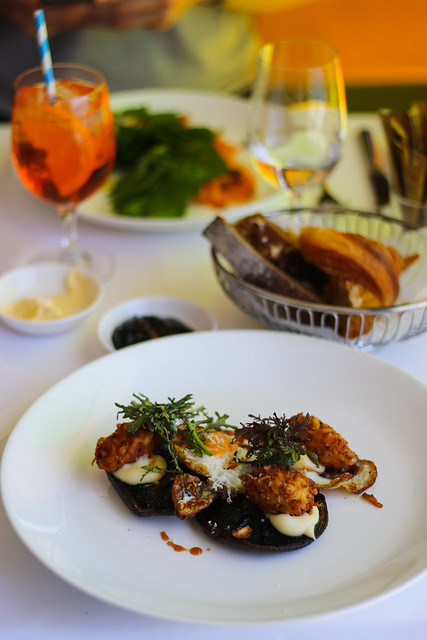 Despite the heat, we lingered at Iceberg’s, enjoying a second Spritz while we took in the absolutely stunning views of Bondi Beach. Then, it was time for a swim below—straight into the ocean for a memorable start to 2018.

The Bitches say: A+ for a delicious brunch with decadent pastries, top notch service, and one of the best views in the world.