Day Two of Lollapalooza was about the commence, and I needed all of the fuel I could get. With Lolla celebrating its 25th anniversary this year, the festival extended for four full days of music, bites, and plenty of beers.

Speaking of beers, Bud Light graciously hooked me up with a Lollapalooza experience and we all recounted Day One’s festivities over brunch the following morning. I was joined by a few other members of the media, who luckily were big brunch fans as well, honorary Bitches if you will. 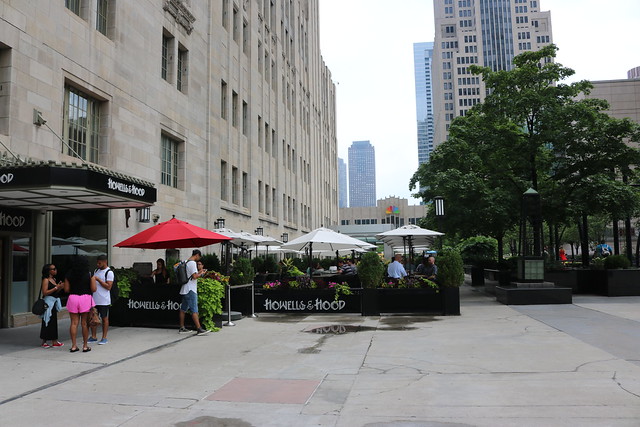 Howells & Hood is located right on Michigan Avenue in the heart of the Magnificent Mile. It’s a convenient location if you’re staying at one of the numerous hotels nearby or need to fuel up for a day of shopping, but not if you’re trying to dodge tourists. 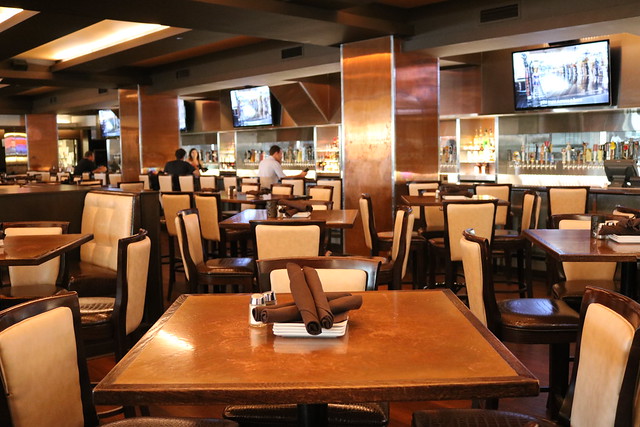 On weekdays and Saturdays, the restaurant opens at 11 a.m. and serves an assortment of lunch-oriented items, although you can still place some orders of side eggs if you wish or snag some traditional brunch cocktails. On Sunday, they offer a full brunch buffet including a carving station, made-to-order omelettes, and pastries aplenty. 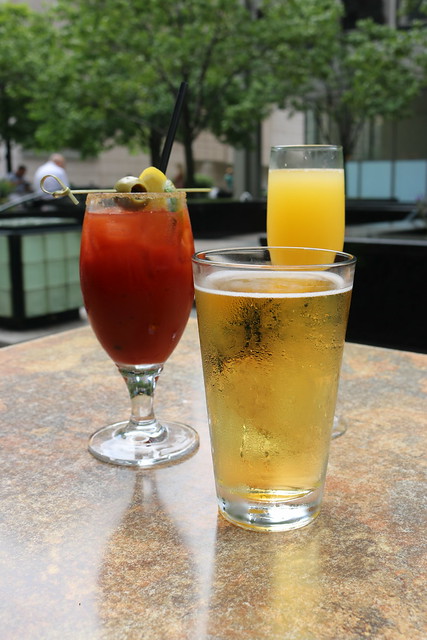 But first, cocktails. Our group ordered an assortment of mimosas, Bloodys, and of course some Bud Lights to keep the party going. The mimosas were fresh and easy to drink and the Bloodys had a nice, thick consistency.

Over our drinks, we couldn’t stop gushing about Bud Light Music’s “Stage Moment” from the night before. Bud Light Music has showcased some of the biggest and up-and-coming names in music at other major festivals like SXSW and Stagecoach, and went all-out for Lolla. As a Chicago native, it was awesome to see Bud Light bring together my fellow Chicagoans Flosstradamus, Chance the Rapper, and Michelle Williams from Destiny’s Child as a surprise show during the Stage Moment, also welcoming home NBA star Dwayne Wade to the Bulls. We had amazing side stage access to the show and I couldn’t stop fangirling over Chance’s set…it really felt once-in-a-lifetime! 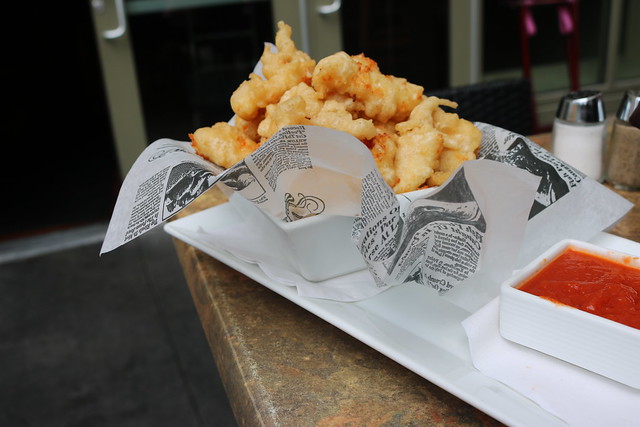 We had a large party at brunch so we ordered an assortment of starters to munch on as we plotted out the remainder of our Lollapalooza lineups for the weekend. Most of the extensive menu features typical bar food, with a fancy or unique twist. Since this was pub fare, the majority of the apps were fried, which was welcomed after a long, and fun, evening at the music festival.

A few of the gals were newcomers to the Midwest and had never tried cheese curds, so this was a must-order to give them a proper introduction to the “Best Coast.” These weren’t the cheese curds from the County Fair; Howells & Hood’s version was crusted in cornmeal and accompanied by a smoked tomato sauce. I’m honestly not a big curds fan, but this starter was flavorful and decadently gooey. 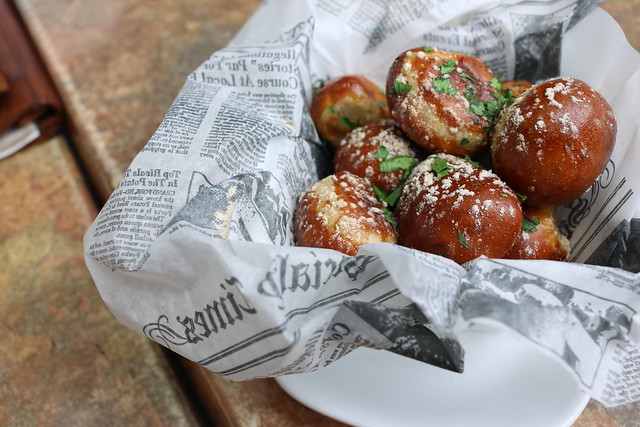 The pretzel bites, topped with sea salt and beer powder, with a side of beer cheese also caught our eyes. Unsurprisingly, the soft pretzel and cheese paired perfectly with our Bud Lights and this dish went quickly. 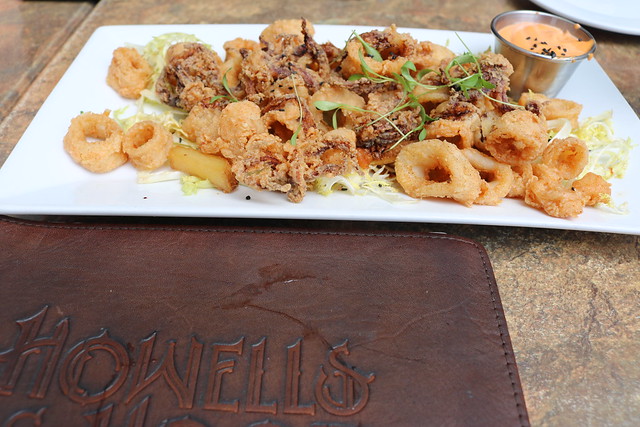 The calamari contained an equal balance of super-fried tentacles and the chewy bits, which was great for sharing. The lemongrass vinaigrette was too fishy for some, but I kept going back and dipping my fries in it. My one qualm was this was a bit cold by the time it reached our table. 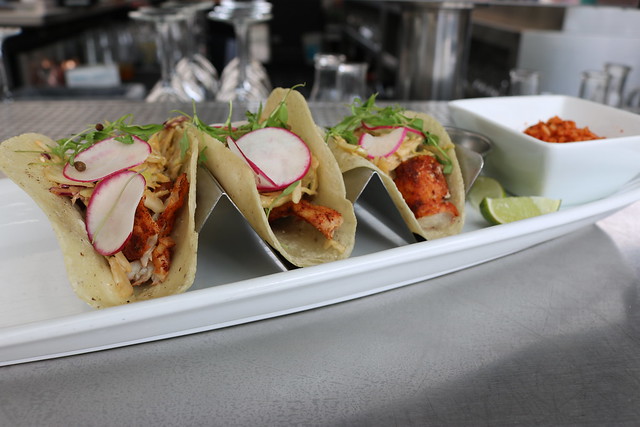 A few orders of fish tacos were shared across the table and unfortunately, everyone unanimously found these pretty bland. With accouterments such as chipotle citrus cabbage and a jalapeño puree, I expected bold flavors and was let down by this handheld entree. 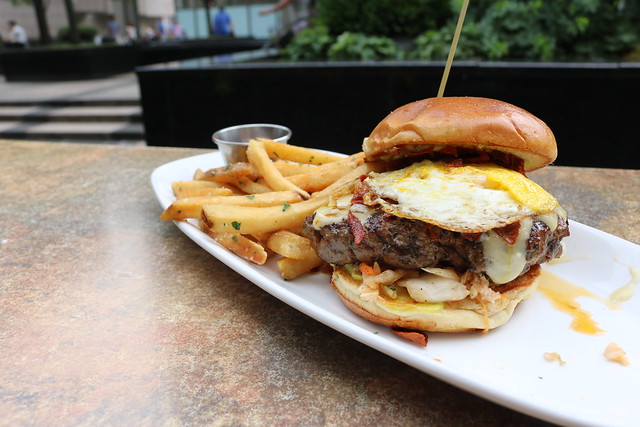 For my main course, I was eying the kimchi burger, especially after I saw that it was crowned the Chicago Gourmet “Hamburger Hop” champion in 2013. I went a little off-menu and topped it with a fried egg, this was brunch after all.

This dish was deserving of its gold medal. The eight ounce Korean-style beef patty was cooked perfectly medium rare and unique toppings like bread & butter pickle aioli, carrot bacon, and Big Ed’s Gouda, made it a stand out. They should consider adding the fried egg to the weekend brunch menu as I found the runny egg yolk added great flavor and texture to the sammy. 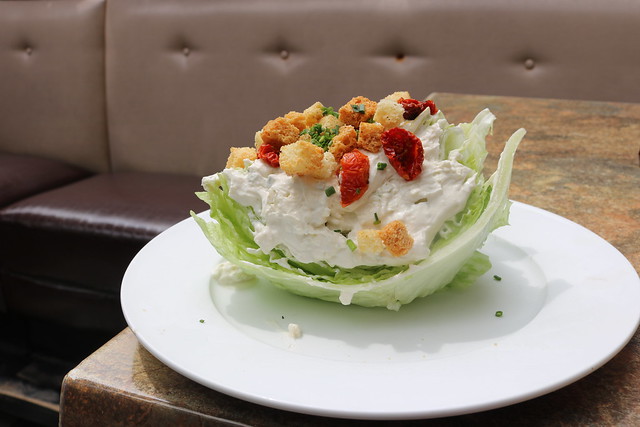 We needed a little bit of greens on the table so gave the wedge salad a shot. As typical at a pub, the salads aren’t exactly healthy, especially when on iceberg lettuce and slathered in bleu cheese. The wedge salad was basically a vessel to eat cheese, but we didn’t hate it.

All in all, this was an indulgent and greasy way to prepare for another fun-filled day at Lollapalooza. We ordered another round of mimosas and Bud Lights for the road and were ready to hit Grant Park.

The Bitches say: B. Elevated bar food and a great beer selection on Magnificent Mile. A nice option to keep in your back pocket to avoid cheesy chain restaurants or overpriced meals in the area.

One thought on “Howells & Hood Brunch”