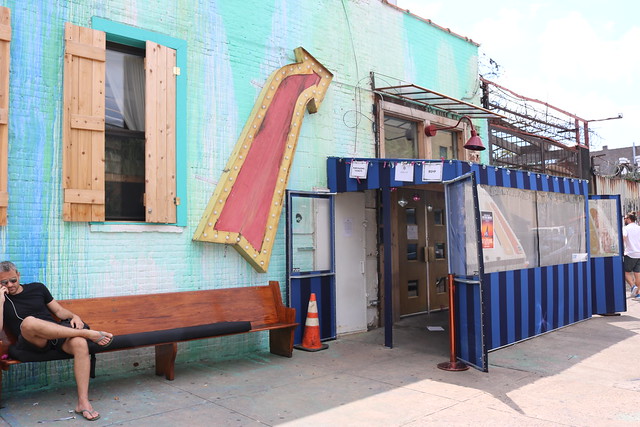 From the extensive events listing on House of Yes’ website ranging from live DJs to pajama parties, I knew that brunch was going to be eclectic. I had heard of the venue’s wild late night parties so I was thrilled to give brunch a shot when we were recently invited in; brunch was on the house. It was an easy jaunt on the L from my boyfriend Robert’s apartment in Williamsburg and before we knew it we were entering a daytime wonderland. 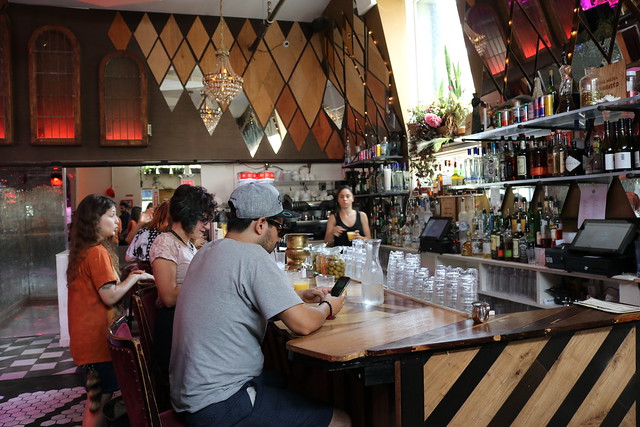 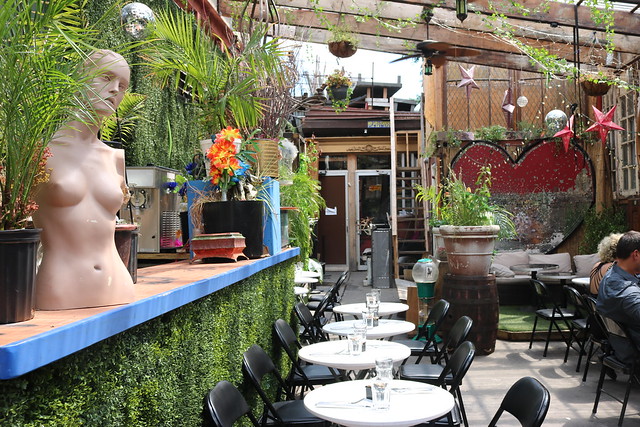 The venue itself is expansive and quirky. The interior was a cross between a circus and a nightclub with bright colors, disco balls, and abstract art. There’s a stage in an adjacent area to the main dining space as well as a funky garden for those who wish to dine al fresco. 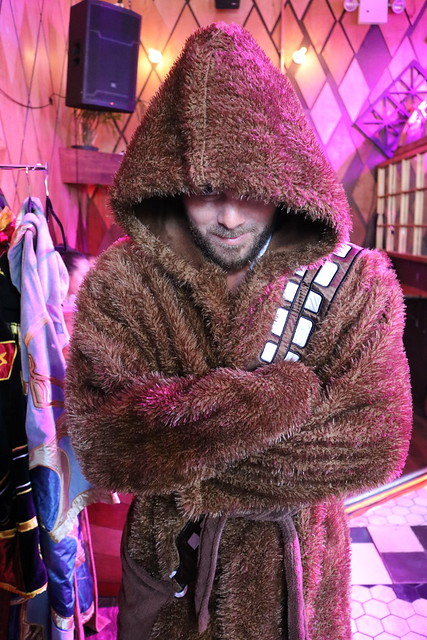 Most of the weekend brunches have a theme and this particular Saturday afternoon featured a burner fashion show and costume sale. Fast forward after a few round of cocktails and Robert and I had a blast trying on furry onesies and kooky headpieces.

I wasn’t sure what to expect prior to entering the establishment, but apparently I was the last to know about House of Yes’ brunch offering; the restaurant was totally packed. We reserved a table in advance so we luckily were seated right away despite being admittedly a bit late for our rezzie. 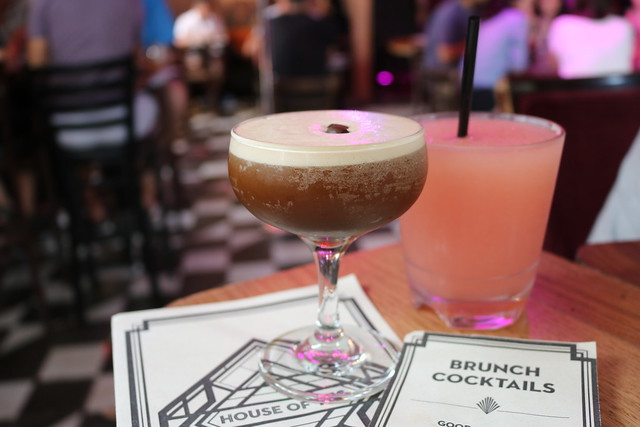 We promptly survey the cocktail menu and I was thrilled to see unique options beyond your typical Bloody or mimosa. We were in desperate need of some coffee so Robert and I fought over who would get to order the Good Morning Mr. Cooper, with vodka, espresso, and coffee liquor. I acquiesced after I spotted frosé in the margarita machine at the bar.

The Good Morning Mr. Cooper was served beautifully and was a quality espresso martini. It was the perfect pick me up to start our brunch. The frosé also went done easy; the boozy slushy was refreshing and not too sweet. 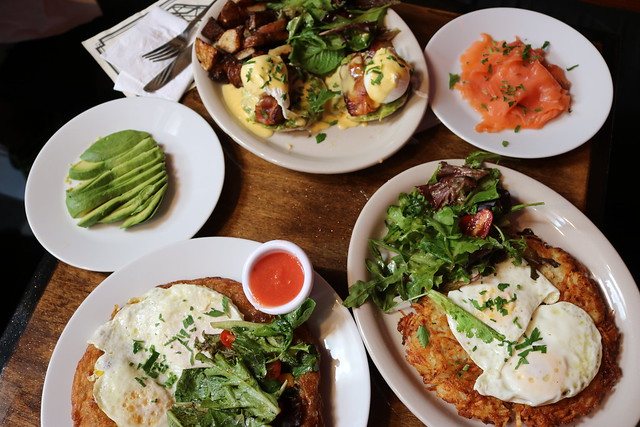 The brunch menu at House of Yes is just as eclectic as its interior. The menu features some brunch classics like eggs Benedict and avocado toast as well as items with a Mediterranean twist such as an eggplant omelette with za’atar home fries and shakshuka.

We were torn between so many items so ultimately we ordered three entrees to split, for the sake of journalism of course. 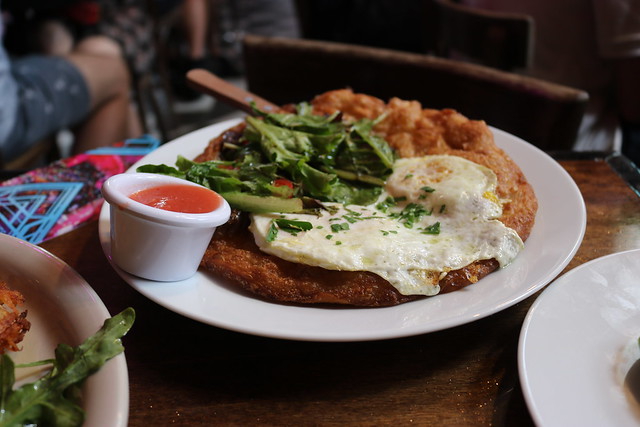 My picks were the malawach and the eggs on a latke, although I was dismayed that visually they looked nearly identical. The malawach featured eggs over easy on a flaky Yemenite puff pasty while the eggs on a latke included eggs over easy on a housemade potato pancake. Although these two entrees were twinning, they luckily had two distinctive tastes.

The malawach’s puff pasty was satisfyingly greasy, slightly reminiscent of fried dough that you’d eat at a carnival, in the best possible way. I prefer runny eggs so these eggs were too cooked for my taste, although Robert disagreed. Total personal preference. We both enjoyed the fluffy pastry, best served warm. My one qualm was the spicy tomato puree lacked both heat and flavor. Once I doused my serving in hot sauce, I was a happy camper. 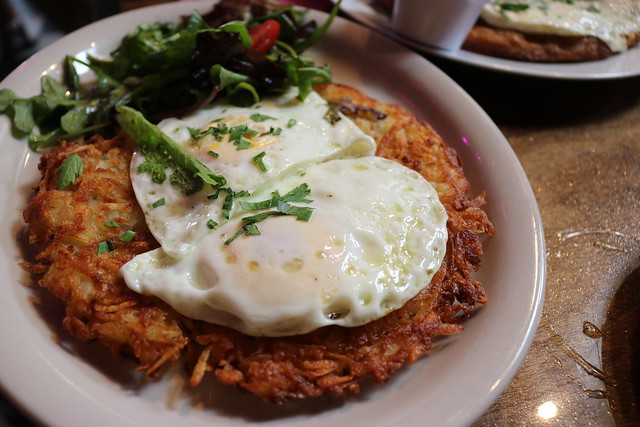 I’ll never let Robert live down that he called the latke a hash brown, but then again, he’s never been to a bar mitzvah. Similarly to our review of the malawach, we agreed to disagree on the preparation of the eggs, but the potato pancake was perfectly crispy. 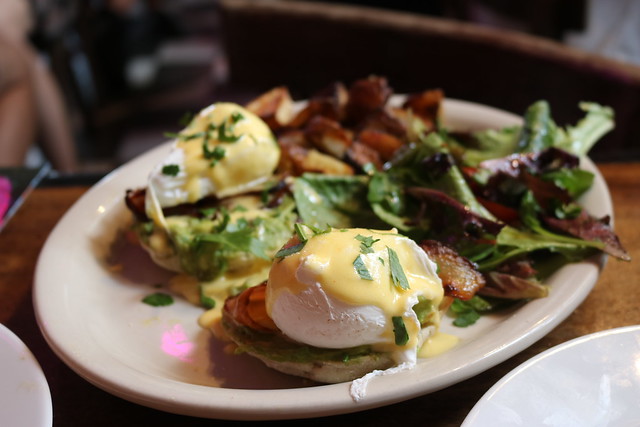 Robert ordered the bacon and smashed avocado Benedict, which he decreed a winner. He remarked that bacon and avocado are a natural pairing, but often overlooked on most brunch menus. He easily polished off the dish and was completely satisfied. 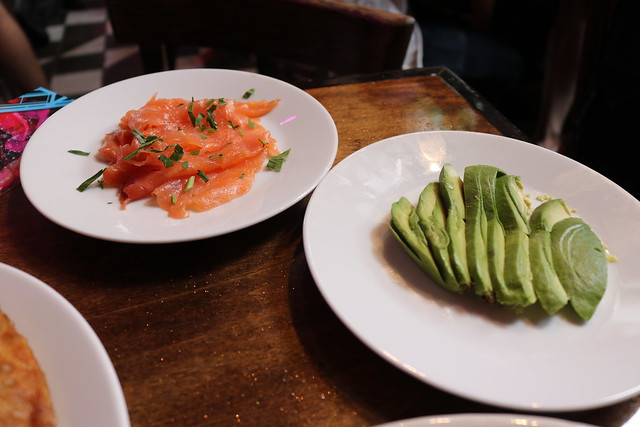 If this wasn’t enough, we also threw in sides of smoked salmon and avocado. These were great additions to the malawach and latke dishes, adding some healthy fats to our carb-heavy orders.

Just as we were ready to throw in the towel, our server insisted on bringing over the French toast, as we’d be remiss to not try it. Luckily, she brought us a smaller serving of the entrée as we were about to burst at the seams at this point. 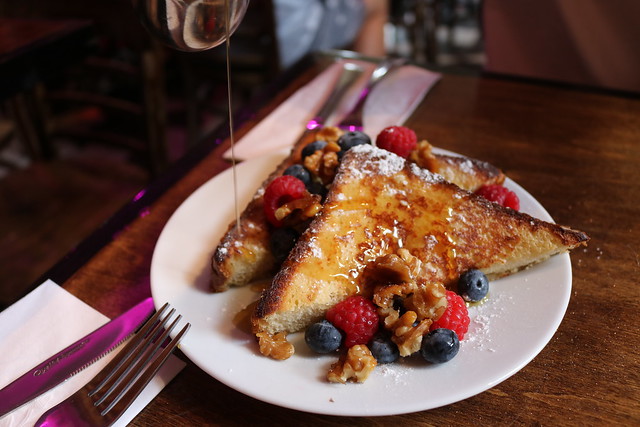 She was right, no one should leave House of Yes without trying the French toast. It was the perfect sweet ending to our feast. It had a satisfyingly crispy crust in stark contrast to the soft inside, topped with fresh fruit and candied walnuts. We only mustered a few bites, but what’s brunch without dessert?

The Bitches say B+. Fantastic cocktails, a worldly menu, and an incredibly fun venue for brunch. Perfect for birthday brunches or a festive group get-together, day or night.

House of Yes serves brunch on Saturdays and Sundays from 11 a.m. until 4 p.m.