The West Village is one of my absolute favorite neighborhoods in all of New York City. There’s just something about the cobblestone streets, the immaculate townhouses, and the charming shops and restaurants that make you want to spend hours and hours walking around. 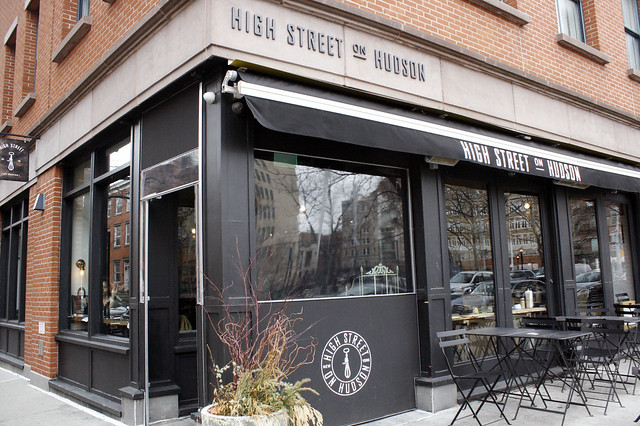 A number of our favorite brunch spots are in the area, including The Spotting Pig, Rossopomodoro, and Quality Eats. But there was one restaurant that had been on a number of local “must lists” that we had surprisingly yet to try: High Street on Hudson. 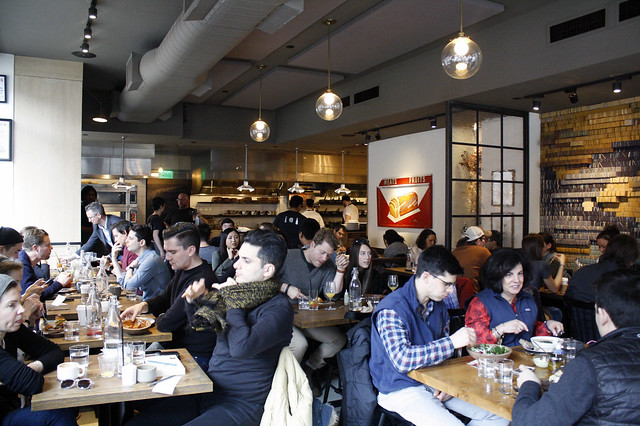 We had been to the restaurant’s sister establishment, High Street on Market, during our last trip to Philly and really loved everything we tried. So, when we were invited in to come by their NYC location, we jumped at the chance. 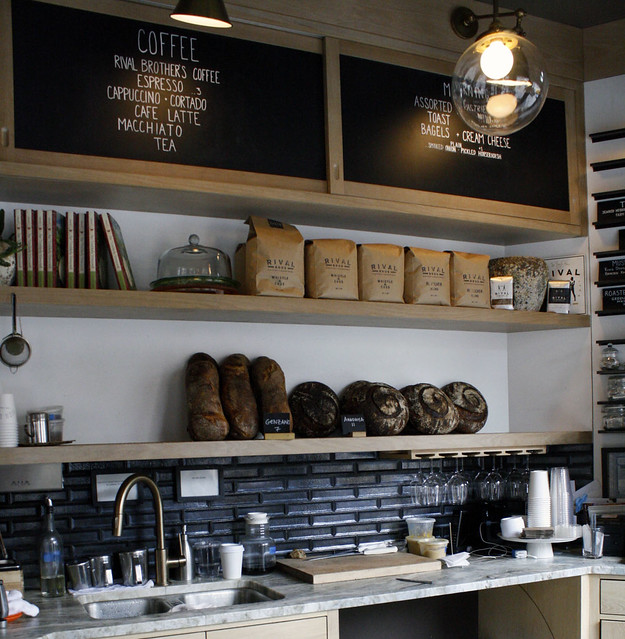 My friend, Kylie, joined me for the momentous occasion. When we arrived, we were promptly seated at a cozy end table. High Street on Hudson is on the smaller side—even by New York standards—and the entire restaurant was already buzzing with customers during prime brunch time on a Saturday. 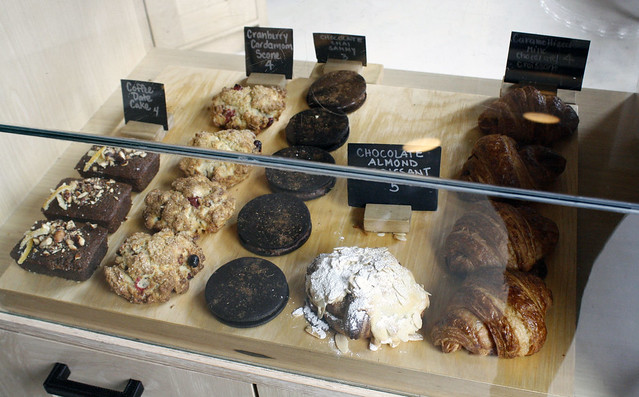 If you’re in the mood for one of their famous pastries or a coffee to-go, High Street does have a corner area  where you can place your quick to-go order and be on your way. But, since we were there for the overall brunch experience, we perused our menus and decided on what we should share. 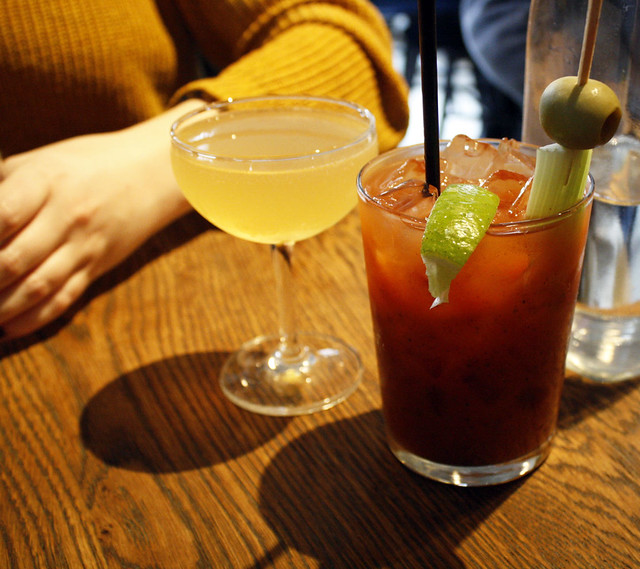 We kicked things off with a High Street Bloody Mary for me, and a Pomme & Pine for Kylie. My Bloody was very tasty; I was appreciative that it was served in a decent-sized glass, as it lasted through the majority of our meal. The Pomme & Pine was refreshing with a hint of citrus, but on the stronger side for a brunch cocktail.

Insisting we couldn’t start the meal without one of High Street’s famous pastries, our server brought over a chocolate almond croissant. The flaky and buttery croissant was filled with what tasted like a chocolate paste and topped with what seemed like an almond icing, then sprinkled with sliced almonds. 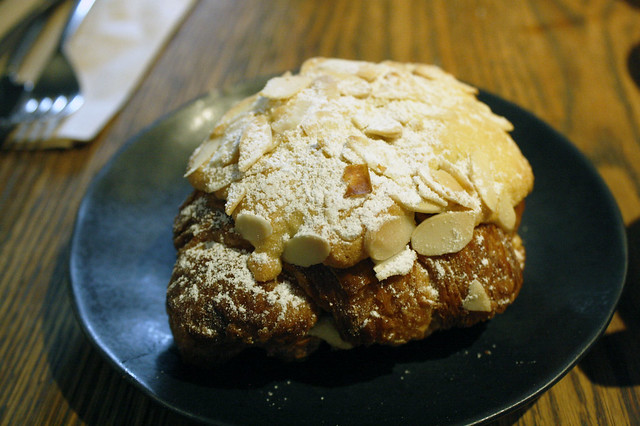 I’m not the biggest fan of almonds, so I wasn’t expecting much. But, trust me when I say this was one of the best pastries I’ve ever had. It was sweet—but not overwhelmingly so—with a hint of nuttiness from the almonds. The pastries are only available while supplies last, so if you have your eye on one, order as soon as you sit down! 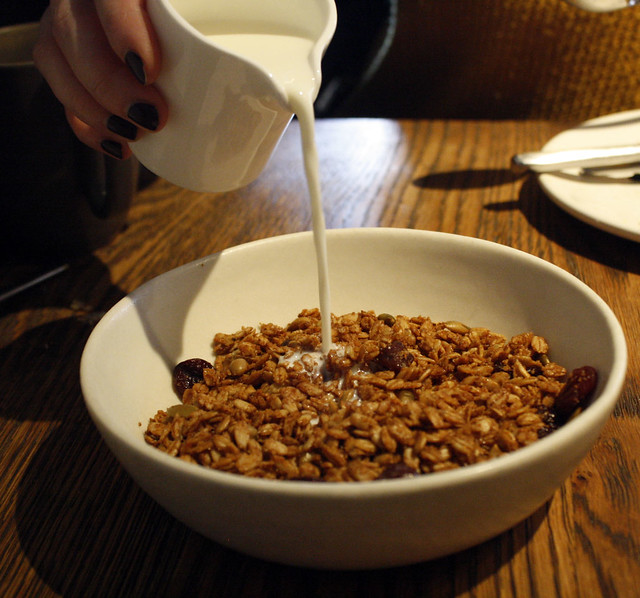 Next, we split the malted granola. Mixed with pumpkin seeds and dried cherries, I initially expected this to be served over yogurt. Instead, it was accompanied by a side of Sullivan Co. Farms milk. It was a nice touch that the milk was served table-side, so that you could pour as much or as little as you liked.

The longer the granola sat in the milk, the more the malt melted into the milk, giving the overall dish a rich, caramel flavor. The fresh granola, pumpkin seeds, and fruit made this dish taste healthy, yet sweet and satisfying. 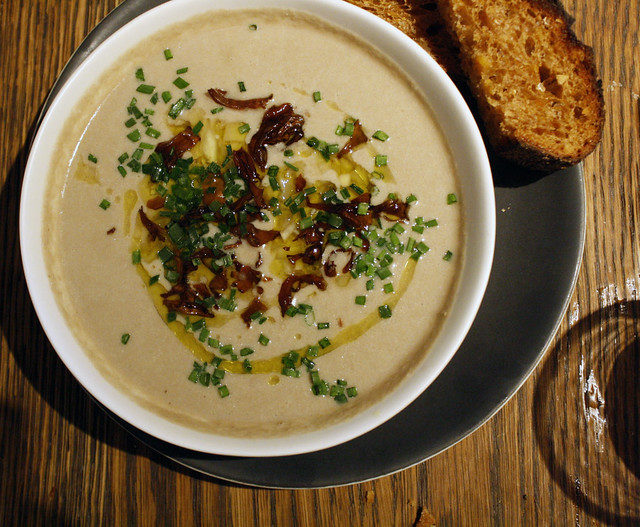 Since we started things off on a sweet note, we decided to transition into savory and ordered the roasted wild mushroom soup based on our server’s recommendation. This dish was actually vegan; rather than using milk, butter, or cream, the chef made the creamy texture with emulsified chia seeds. 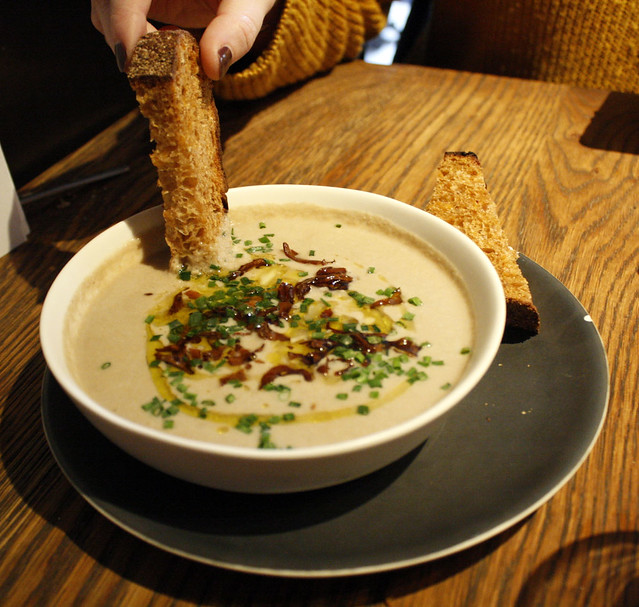 Our server claimed you would “never guess it was vegan,” as the chia seeds addition gave the soup the same velvety texture as dairy. We were skeptical, but decided to go with it as we are both lovers of all things mushroom. We weren’t disappointed–this was rich, filling, and full of that amazing mushroom flavor. I couldn’t stop eating it! 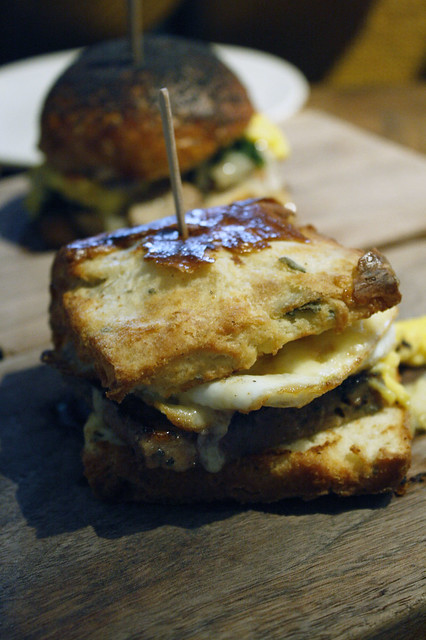 We ended the meal by sharing two breakfast sandwiches: The Bodega and The Forager. The Bodega comprised malted breakfast sausage, a fried farm egg, aged cheddar, and a sage black pepper biscuit, made in-house.

We were charmed that the sandwich was served with your own mini squeeze bottle of homemade hot sauce. This was the ideal breakfast sandwich: the biscuit was peppery and fluffy, the egg was perfectly cooked, and the sausage was juicy and packed with flavor. 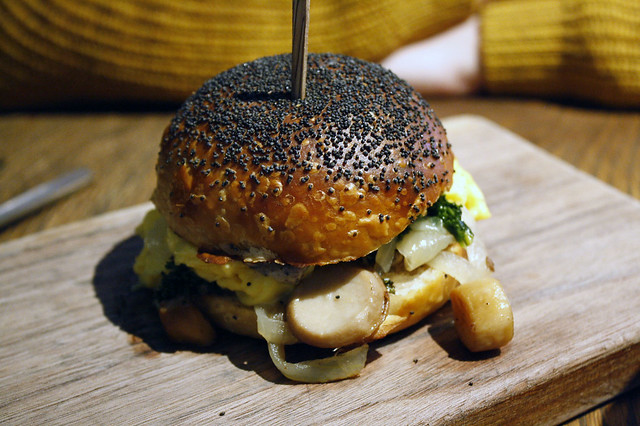 As good as the Bodega sandwich was, The Forager was even better. King oyster mushrooms were topped with braised kale, another fried farm egg, young swiss cheese, and a black trumpet mayonnaise slathered on the bun. Again, we may be biased due to our obsession with mushrooms, but this sandwich was just so earthy, savory, and absolutely delicious. Our only complaint is that the sandwiches were slightly on the smaller side. 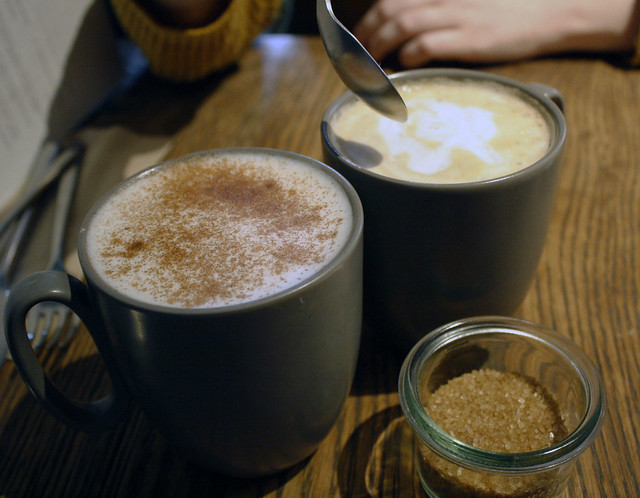 We ended the meal with a caffe latte and a malted chai. The latter was a mixture of malted milk and spiced rooibos chai tea. It was the perfect blend of spices and sweetness, and really warmed me up on what was a somewhat chilly day.

High Street on Hudson serves breakfast from 8 a.m. until 11:30 a.m. on weekdays, and until 3 p.m. on Saturdays and Sundays.