Let me let you in on a little secret: I really like to eat healthy. I’m addicted to green smoothies and gluten-free baked goods. Because, while I like to eat healthy, I still like my treats daily. My constant lament about Washington? The lack of smoothie and juice bars. While there’s a green juice place one seemingly every corner in New York and Los Angeles, we’re sorely lacking here in Washington. Enter: Fruitive.

I scheduled a midweek date with Ashley for brunch on the house at Fruitive, which opened last year at CityCenterDC.

We tried a variety of smoothies, most notably the “Coffee Date,” with cold brew coffee, cashew milk, peanut butter, raw cacao, and dates. This creamy, chocolately coffee drink is perfect for anyone who wants a protein-packed smoothie that also tastes like dessert. 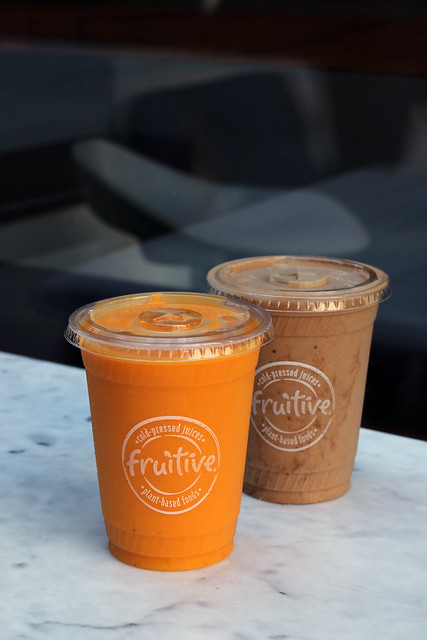 The Dragon Berry is quite popular, as it’s bright pink due to the Pitaya (a pink Brazilian fruit that’s a fancy cousin of acai). Along with the Pitaya, this smoothie is made with peaches, oranges, strawberries and almond milk—sort of an elevated, fuschia strawberry banana smoothie.

The home run smoothie is the Iron Berry, which is bright pink. It’s made with a cashew milk base, blueberries, strawberries, avocado, pitaya, dates, spinach, kale, and vanilla extract. It’s sweet yet delicious, packed with protein and super foods. Since first visiting Fruitive, I’ve been back twice in one week for this smoothie.

Because I’m an Acai bowl addict, I went for the Pro Bowl, made with acai, cashew milk, pitaya, blueberries, strawberries, and kale (it’s basically the Iron Berry smoothie in a bowl). It’s topped with gluten-free granola, almond butter, sliced strawberries and bananas, and chia seeds. It’s hearty, yet sweet, and absolutely delicious. 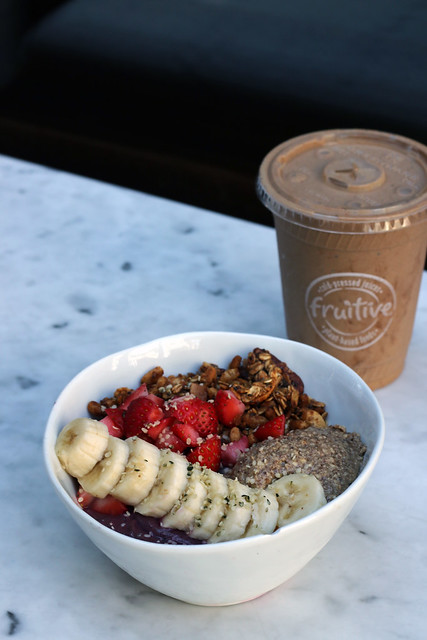 While this is a fast casual juice spot, the addition of avocado toast and assortment of waffles qualify this as a brunch, by Bitch standards. But, take note, this is not a sit-down restaurant, but rather order at the counter, grab a table in their small outdoor seating area, or take it to go. 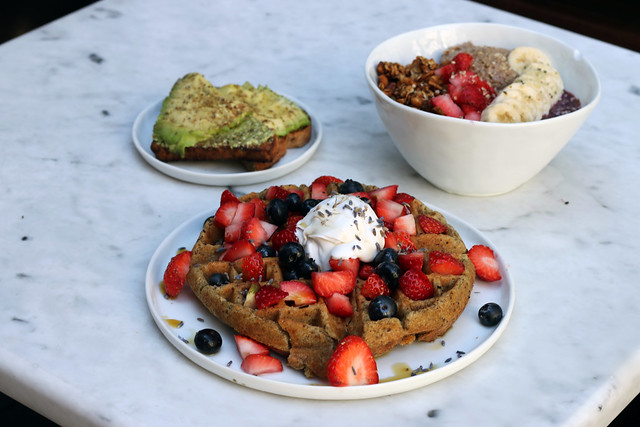 There are three toasts on the menu, and we opted for the savory avocado herb toast: a flax and spelt bread topped with sliced avocado, a basil pesto mayo, oregano, sea salt and black pepper. It was a clean, hearty, and savory toast. Bonus points that you can order one slice, or two.

We ordered two waffles, which are gluten-free, dense, and absolutely delicious. The first is the Sweet Berry, a berry-focused waffle with strawberries, blueberries, lavender sprinkles, and whipped coconut cream. 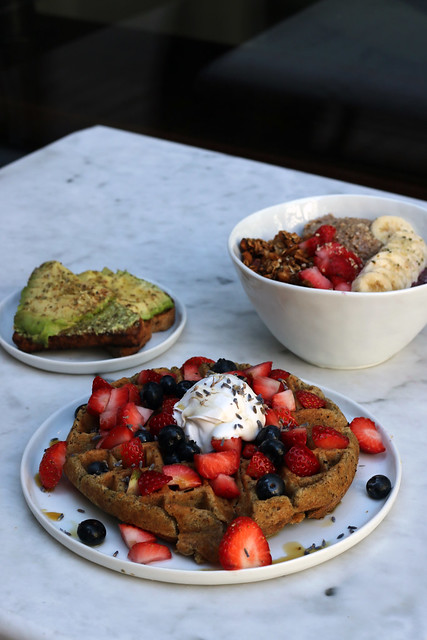 The ABC waffle was mind-blowing: a massive waffle topped with sliced bananas, almond butter, cacao, Maple syrup, and whipped coconut cream. It’s dairy free, gluten free, and one of the better brunch waffles I’ve ever had. It’s so good, I’m considering leaping up from my chair and heading to get one right now. Except, it’s too cold outside. 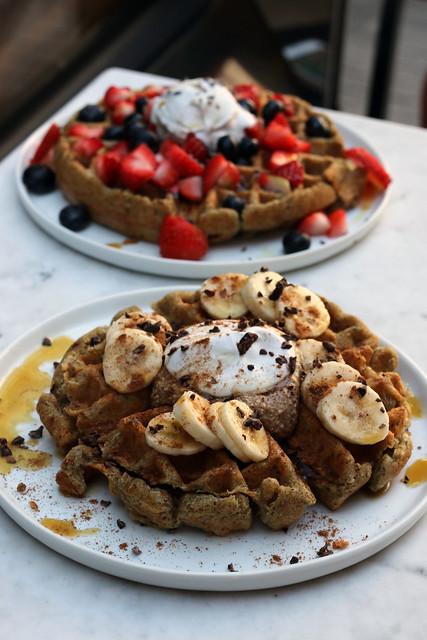 I’ll be back again and again for the acai, the smoothies, and the waffles, Fruitive. Do you have a repeat customer appreciation card? If so, sign me up. 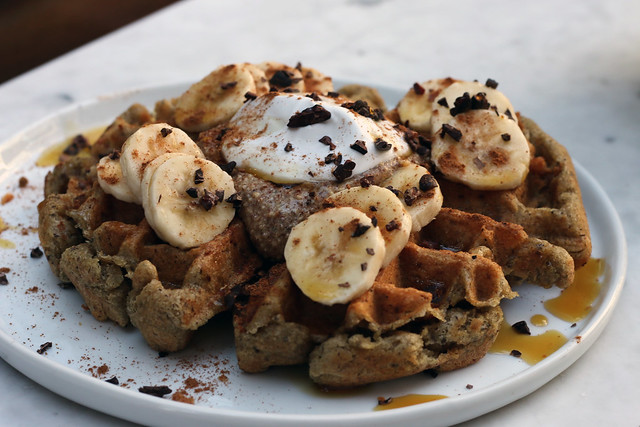 The Bitches say: A. For a healthy, light and convenient weekday breakfast or brunch.

Fruitive is open daily, weekdays at 7 a.m. and 9 a.m. on the weekends.