Forbidden Root is quite the treasured gem. Merely a year after opening, my husband and I have frequented this brewery restaurant several times for dinner and beer. Located right down Chicago Avenue from where we live, Forbidden Root is Chicago’s first botanic brewery. 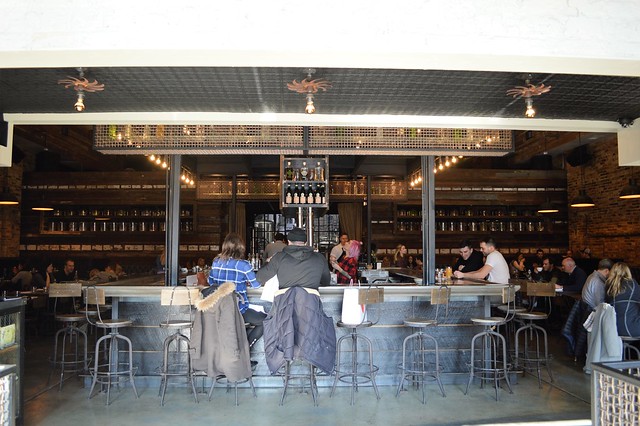 One unusually sunny Sunday this January, my sister, husband and I decided to go check out the brunch offerings at Forbidden Root. We have become a big fan of this place for a number of reasons; an extensive list of unique beers, seasonally inspired progressive menu items, and the warm and inviting atmosphere thanks to the huge windows up front allowing for lots of light. 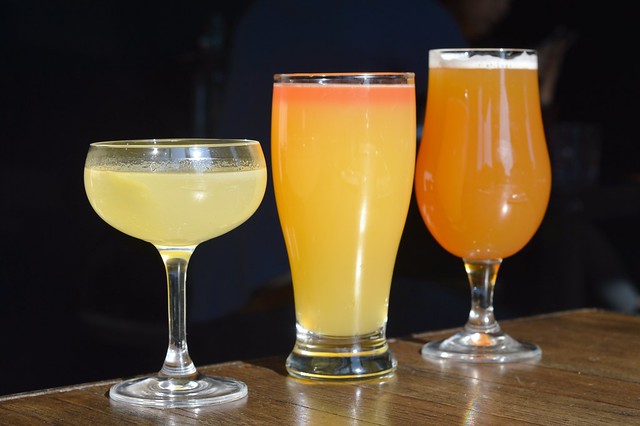 The space itself is huge, but at first glance you wouldn’t know. The first room is filled with high-top table and face out toward the windows at the front looking out onto Chicago Avenue. The large bar in the center of the restaurants divides the huge back dining area. The space is modern and cool. 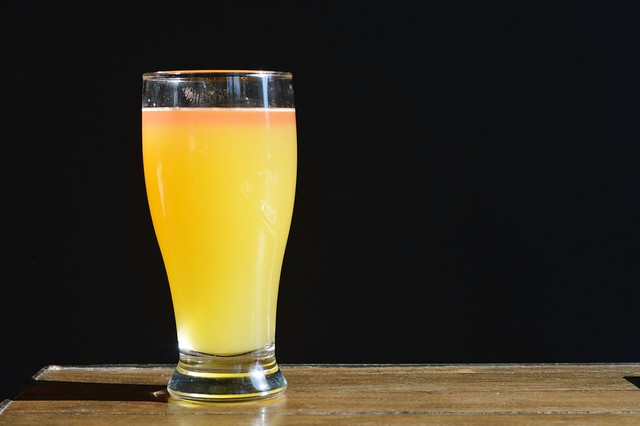 Parched and at a brewery, some Sunday libations were in order. Chris went with an IPA, per usual, called the “Jacob Goes to Juicetown”. I opted for a Beermosa and Ashley went with a FR 75. My beermosa was made with a Kolsch-style lager, and topped with bitters and orange juice. It was delicious and refreshing; seriously, it gives a mimosa a run for it’s money. Ashley enjoyed her FR 75 as well, saying it was equally as refreshing and had the perfect amount of sweetness.

While the brunch menu is not huge, it does offer a variety of dishes, and I must say, everything sounded delicious. Eager to see what my two counterparts were thinking of ordering before I made my choice, I was delighted that they each had chosen something different than from what I was eyeing. 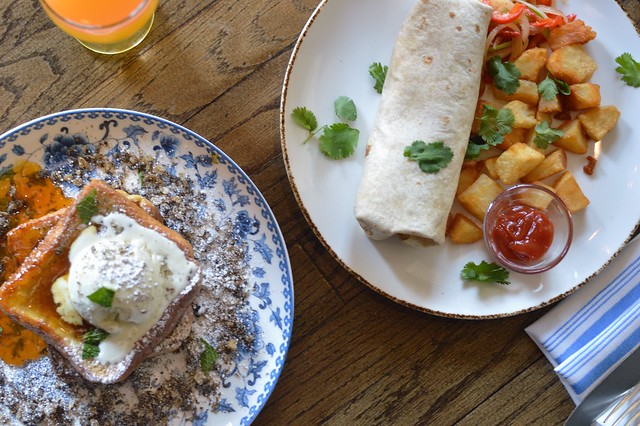 Chris went with the breakfast burrito made with pork. It came with a side of breakfast potatoes and peppers. The burrito had beans inside of it, and packed a good amount of heat. It was perfectly wrapped and I was thankful to have snuck in a quick bite before Chris devoured it in three large bites. 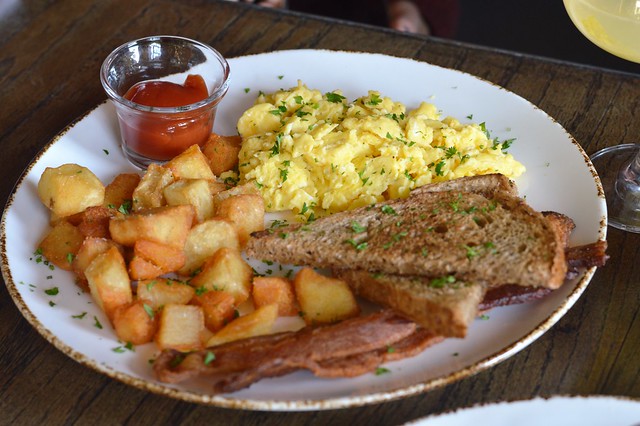 Ashley went with a classic: the Root breakfast—made with two eggs your way, bacon or sausage, breakfast potatoes and toast. Nothing too exciting, but the bacon was delicious and her scrambled eggs were cooked perfectly; she really enjoyed the dish. 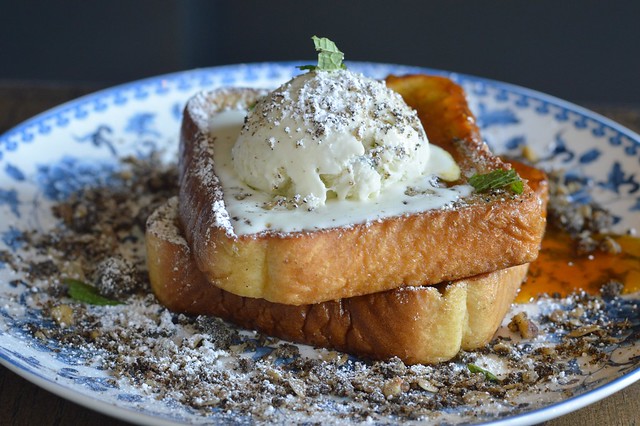 I must say, that my dish was the true winner of the three. I went with the coconut milk French toast, topped with pistachio gelato and crumbled pistachios. This dish was delicious. In awe of how moist and juicy the thick pieces of bread were without milk or eggs, I just kept “oohing” and “ahhing” over this masterpiece. The slices of toast were fluffy, flavorful and this dish is truly one-of-a-kind; I had never had anything like it. 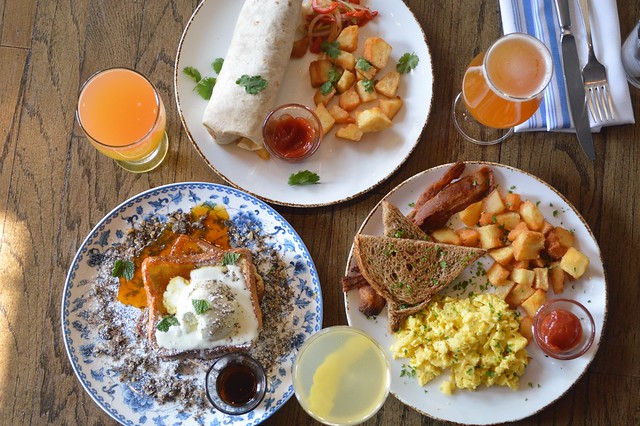 The pistachio gelato added creaminess to the dish, as well as a nutty and earthy flavor. Paired with the syrup, it was a sweet and delicious combination. I practically licked my plate clean.
Following our delicious brunch, Chef Dan swung by to say hello after seeing my snap photos all over the restaurant, and he did not come empty handed. Chef Dan had in tow for us to try the Forbidden Root Float, made with Forbidden Root beer, vanilla ice cream, brownie, tokaji honey, a cacao sea salt rim, and a yummy brandied cherry. 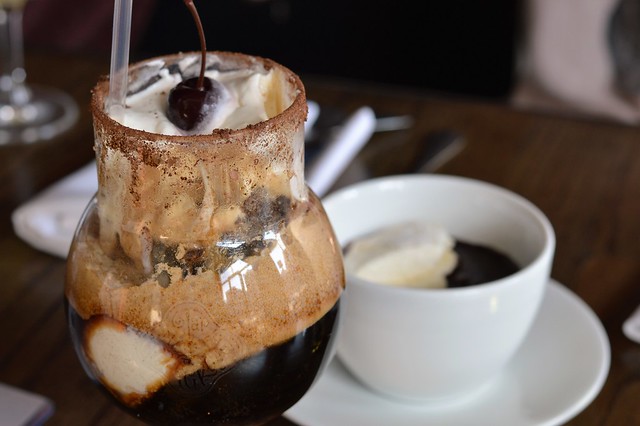 Additionally, he brought us their signature dark hot chocolate that honestly could give some of the other hot chocolates in the city (ahem, Mindy’s!) a real run for their money. It was served with a housemade marshmallow and according to Dan, it takes over four hours to make. 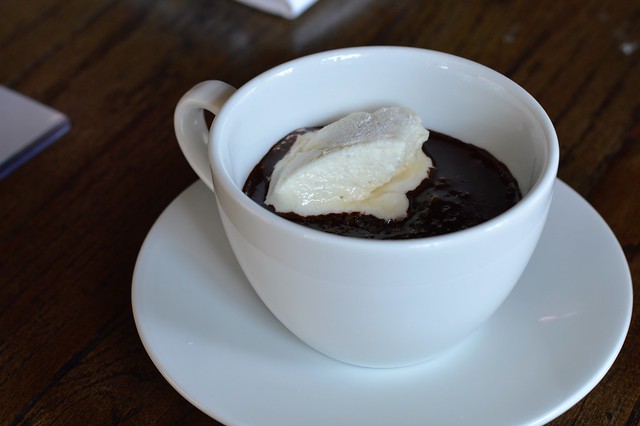 The hot chocolate was rich, decadent, and delicious. It was the perfect sweet finish to our already awesome meal. Without any doubt, Chris and Ashley and I knew that this was the best brunch we had in awhile, and we made the right choice in coming here.

Forbidden Root is an excellent spot to check out. The menu is exciting and unique, and their craft botanic beers are worthy of the hype. On this particular Sunday, service took a little bit longer than one would expect, but I believed it to be on account of the unseasonably gorgeous weather and the restaurant getting busy.

While we were some of the first patrons to arrive at the restaurant, before we even realized it almost the entire dining space had filled up in a short matter of time. The staff was wonderful, and the delicious food and drinks took center stage, which is what makes this food blogger a happy gal.

The Bitches Say: A. Forbidden Root is a gem, perfect for all occasions and brunch dates; we highly recommend this spot for Sunday brunch, or just for an awesome brewery to check out.