We were invited to try the newly launched brunch at Fogo de Chao, the Brazilian steakhouse chain, in Tysons Corner. I was intimidated by the all-you-can-eat meat concept, so I brought my carnivorous friend, Steve, to help.

We were seated at a sunny table among lots of families. Our waiter took our drink order and suggested the grilled shrimp appetizer. While we waited for our first course to arrive, we caught up and admired the beautiful space. The high ceilings and modern details are gorgeous and practical for the buffet style portion of the meal. 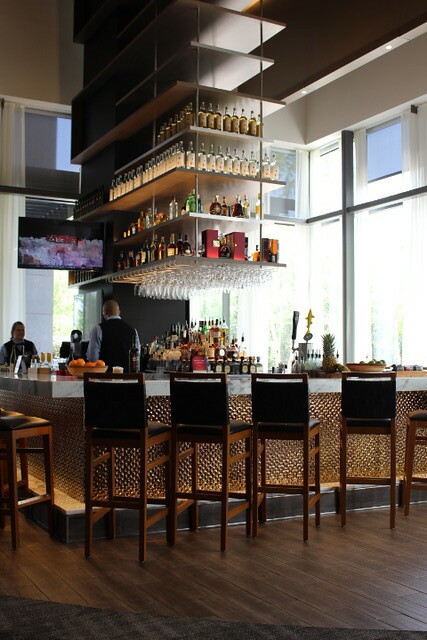 Our drinks were delicious and strong. I ordered the seasonal strawberry hibiscus caipirinha and Steve ordered the whiskey jam sour. My drink was made with hibiscus-infused cachaça, muddled strawberries, and lime. Cachaça is a Brazilian liquor made from fermented sugarcane juice. This drink tasted like a mojito, with a dash of Hibiscus, making it a playful pink. I would highly recommend ordering this cocktail. Better yet, it also had the least amount of calories compared to the other drinks. 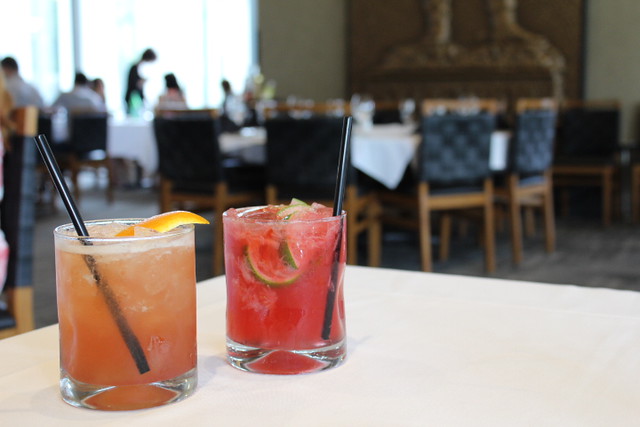 Steve’s cocktail tasted like a fruit-forward old fashioned. It was made with Monkey Shoulder Scotch Whisky, lemon sour, orange bitters, and raspberry jam, then shaken and served on the rocks. 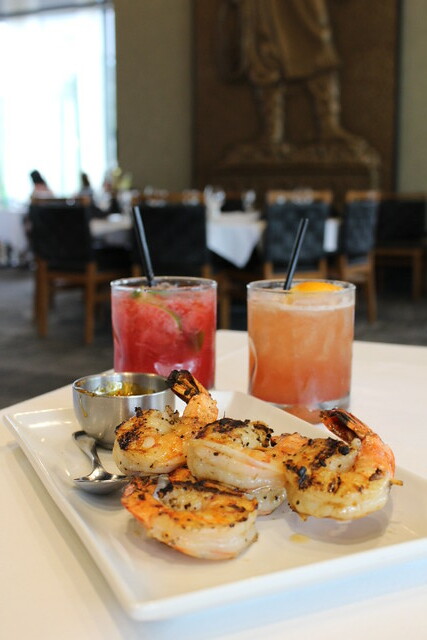 Fogo de Chao offers mimosas, Bloody Marys, and caipirinhas at brunch for $9 a pop. We passed on these cocktails, but they were very pretty and were popular among other brunchers. 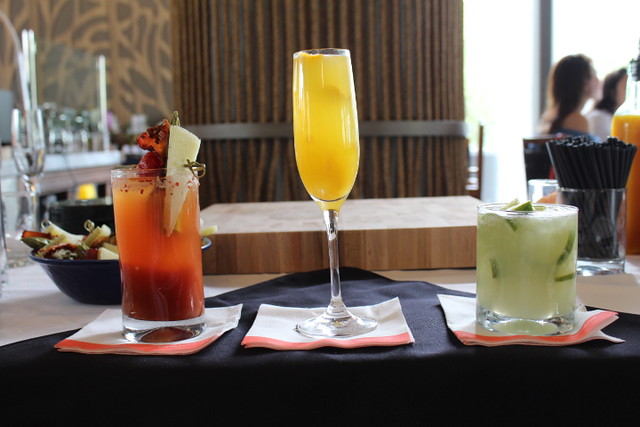 I passed on the shrimp, but Steve really enjoyed these gigantic crustaceans. He also loved the sauce they were served alongside. There was so much food included in the market table and bottomless meat portion, we didn’t think that you needed an additional appetizer. You might as well get your fill at the market table to get more bang for your buck. 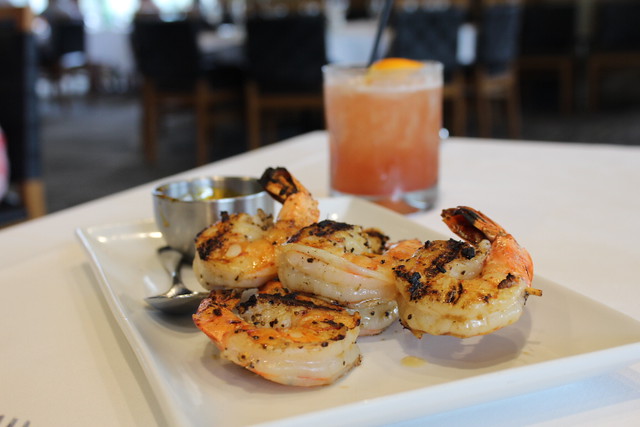 The market table is essentially a buffet. It’s filled with various salads, meats, cheeses, veggies, and fruits. The items on the buffet were all tasty and of good, high quality. However, the bacon and eggs were cold, even though they were kept in a heated container. This girl would never say no to bacon, but I would have liked it warm. Having been to Fogo for dinner, I noticed that the market table was pretty similar at brunch and dinner.

I also wanted to know what the giant wheel of parmesan cheese was supposed to be for–I waited around for a bit for someone to come station the meat and cheese section, but I never found anyone. 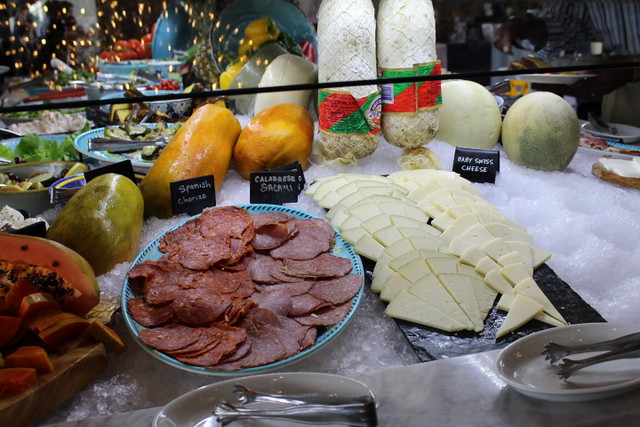 After we took our time on our market table picks, we flipped our food cards over to green, which signals to the servers that you’re ready for all the meats. Whenever you’ve had enough or just need a break, you flip your card back to red, and the servers will stop bringing you meat. I felt intimidated and overwhelmed at first, but I got more comfortable as the meal continued. 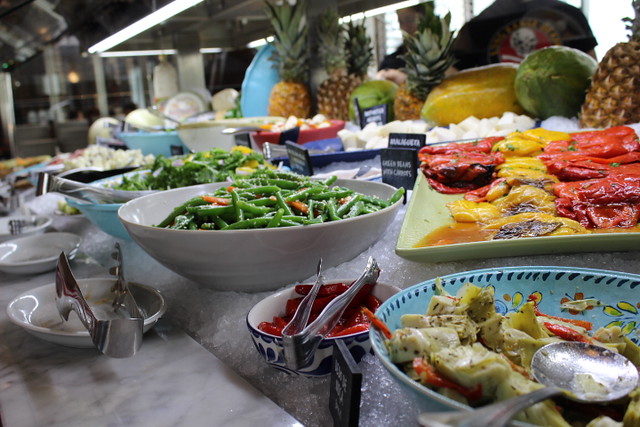 All of the meat was incredible. We loved all of the steak options. Somehow, the filet tasted like buttery bacon on the outside. I also loved the Parmesan encrusted pork–it was so different from anything I would normally order. The bacon wrapped chicken was also a big hit with us. 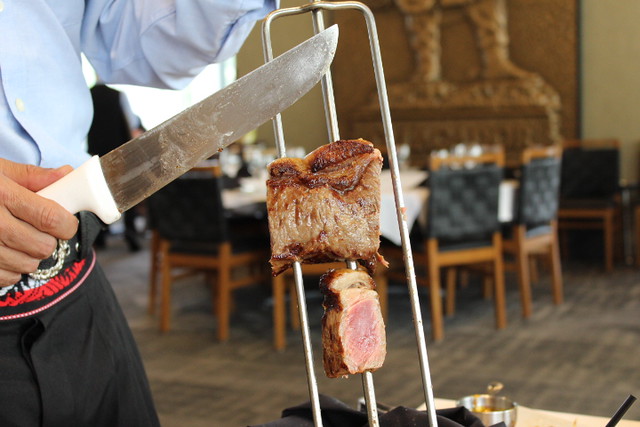 We appreciated that the servers were all attentive and concerned with the various details of carnivorous consumption, such as the temperature we wanted our meat cooked. There were so many options which made it hard to get bored or overwhelmed. Just be sure to pay attention to your card so you don’t get bombarded. 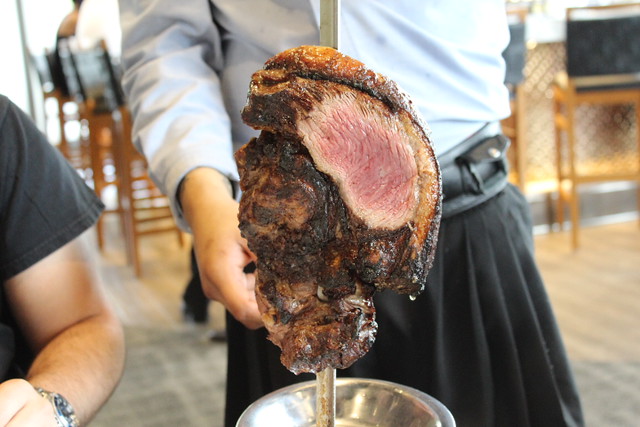 We ordered a light dessert: the key lime pie, per Steve’s request. The whipped cream tasted homemade and the pie filling was tart and fresh. It was a spectacular ending to a hearty meal. 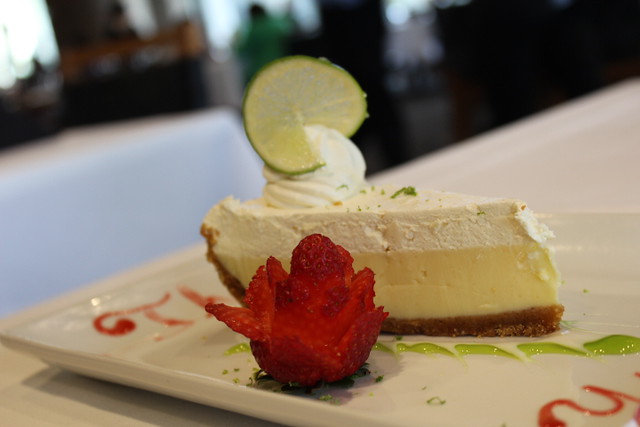 The Bitches say: B+. The meat selection, quality, and preparation cannot be beat. We would have preferred a few more brunch options, and warm bacon.