Back in February, Alexis and I attended the Beads For Hope gala, benefiting the St. Jude’s Children’s Hospital Research Center. We were offered the opportunity to donate a gift to the silent auction, and we jumped at the chance to give back. The gift we donated was a chance to “Brunch with the Bitches,” where the highest bidder won a paid for brunch with us and a friend of their choosing.

That evening, Colleen, was our highest bidder and we all set up a time to brunch with one another. Over time, we all settled on a date, and made plans for all of us to dine at Flagship for brunch. 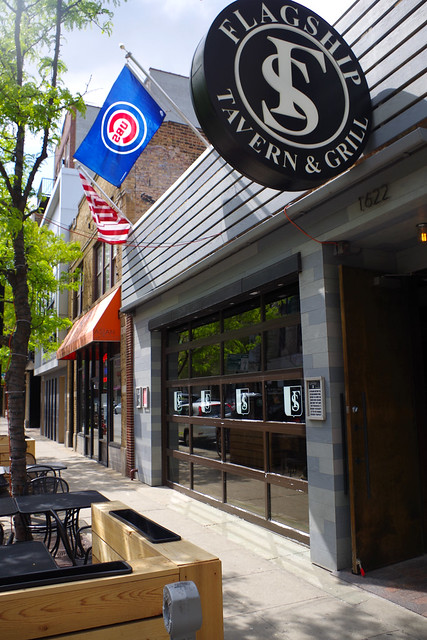 Flagship is a popular sports bar, and grill in Lakeview. Being that this brunch was for charity, Flagship donated the brunch for the four of us and it was all made possible by the lovely ladies at Paper Girl PR. 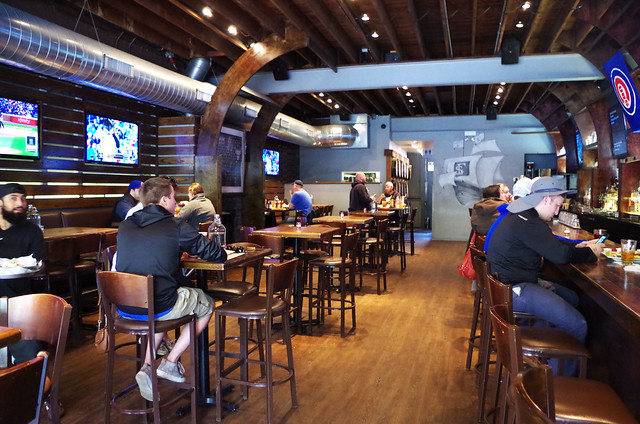 Somehow, despite my hangover from my rowdy night before, I arrived at Flagship right at 11 a.m., before everyone else. My early arrival gave me a chance to take in the scenery, and select a table near the retractable garage door that was unfortunately closed due to the unseasonably cold weather.

Colleen arrived first, followed shortly by her friend Taylor. As Colleen and I were chatting, we all started talk about volleyball on North Avenue beach, and college came up in conversation.

“Where did you go to college?”

I had already been having a great time with these girls, but finding out that we all went to Indiana together, with only a couple years difference, was the cherry on top of the whole brunch. I felt right at home with these Hoosiers.

Alexis arrived a bit after and we all dove right into order cocktails, and scoping out the menu for entrees, as our stomachs had begun to rumble. 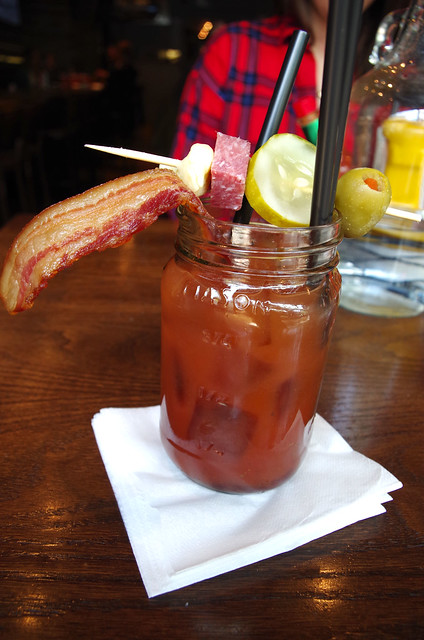 Taylor’s cocktail arrived first and she chose the Bloody Mary with delightful baubles and a thick strip of bacon. The drink was salty, spicy, and delicious—plus, it could easily satisfy your munchies before your entree arrives.

Colleen went with the standard mimosa with champagne and orange juice. It was a delightful mix of both bubbles and juice, and it looked so good that after I was done with my first cocktail, I went for a mimosa as my second. 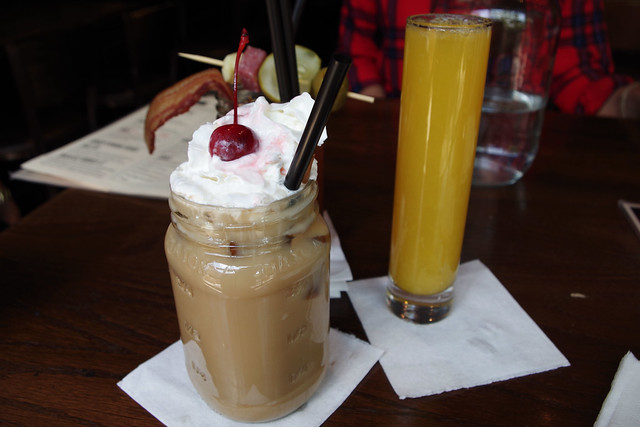 For my beverage choice I honed in immediately on the Irish coffee, which is a mixture of coffee, Jameson Irish whiskey, Bailey’s Irish cream, and topped with whipped cream. The beverage was delightful, and fulfilled my coffee and cocktail needs. 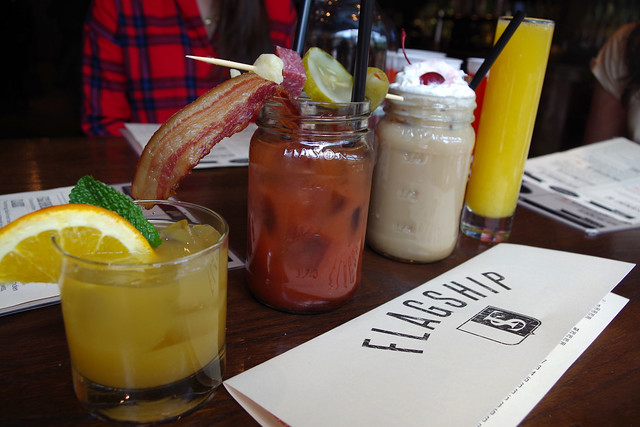 Alexis went for a signature cocktail called the Kentucky bourbon breakfast, which is Kentucky bourbon, orange, and a bit of mint. It was a strong cocktail to say the least but Alexis said it was delicious. 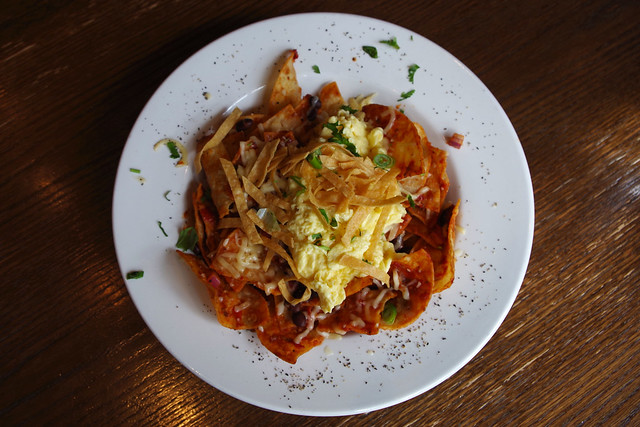 Next up were entrees, and Taylor went with the huevos rancheros. The dish was a pile of full of savory, spicy goodness: crispy tortillas baked with ranchero sauce, black beans, onions, Chihuahua cheese, and your choice of eggs. 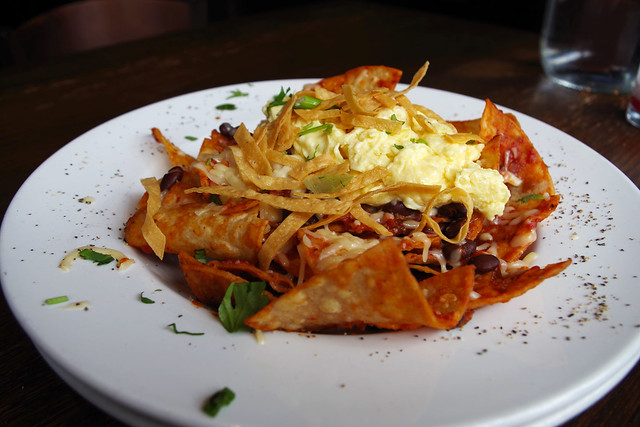 Taylor liked her dish, and enjoyed the side of fruit, which offered some relief from the spicy dish. 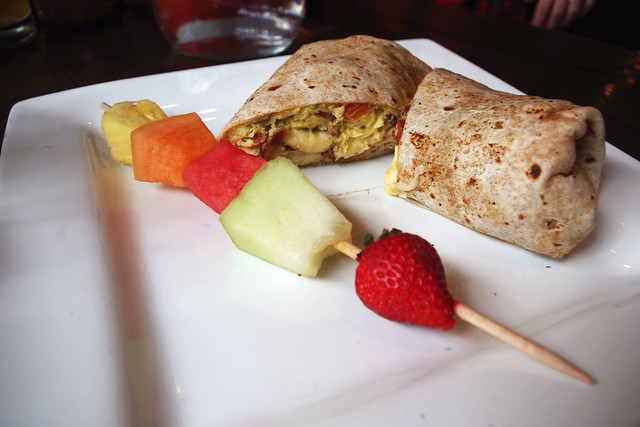 Colleen chose the breakfast burrito, which has scrambled eggs, tomato, avocado, chihuahua cheese, all stuffed into a flour tortilla. Colleen also for fruit as her side to her meal. While this was a filling dish, Colleen did say it was a bit dry. 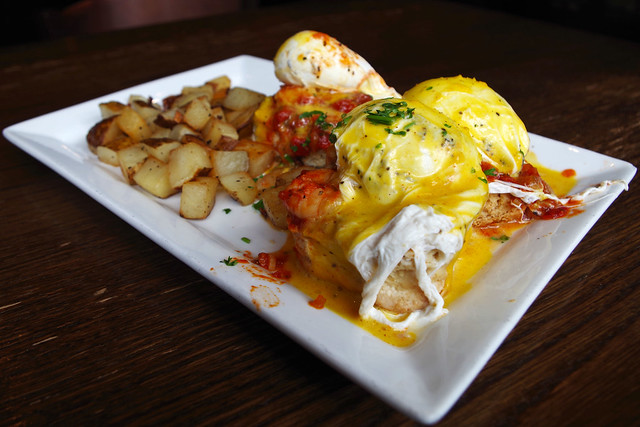 Alexis was deciding between two entrees, and her savory option won out this time. She selected the eggs Benedict and opted for all three different types of eggs Benedict options: the classic, the sardou, and the NOLA, which was featured on Chicago’s Best. All three varieties offer twists to the classic. Alexis enjoyed them all, but did say she wished the English muffin on bottom didn’t get so soggy so quickly. 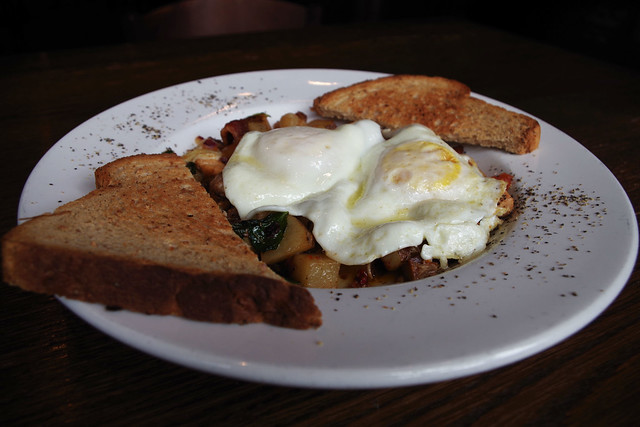 As many of you may know, I have a big sweet tooth, and normally opt for sweet brunch dishes. However, I was feeling a bit under the weather and needed help with my hangover. Low and behold, the hangover hash sounded as if it was exactly what I needed. 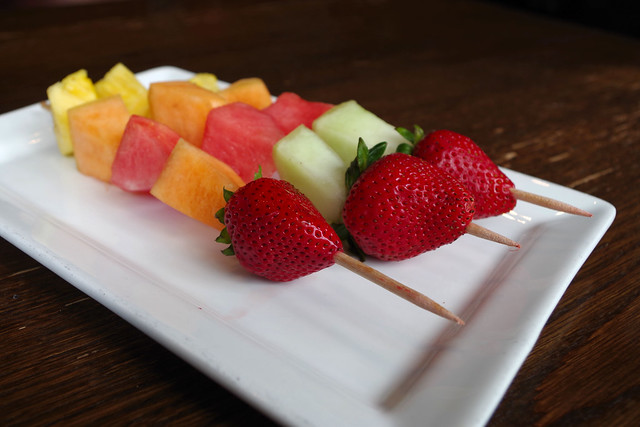 The hangover hash was slow cooked pork belly, apple wood smoked bacon, potatoes, mushrooms, onion, garlic, tomatoes, spinach, roasted red peppers, white cheddar cheese, toast, and two eggs over easy. It was a lot of food to say the least, and it honestly did help to take care of my hangover. 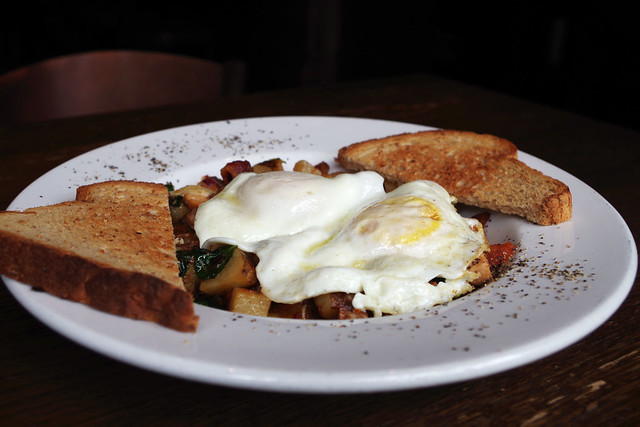 However, it was a bit too greasy for me and while the grease is what makes it a perfect hangover dish, I don’t know if I would opt for it again.

Considering two groups of friends came together, not knowing one another besides briefly meeting at a gala three months prior, this was one of the most delightful brunches I have had in a long time.

The Bitches say: B-. For a sports bar and grill, Flagship certainly has taken the time to create signature dishes and cocktails that are worth a look when up in Lakeview. And when it finally warms up so we can open the garage door to give it an open air feel, it’ll be even better!

Flagship serves brunch Saturday and Sunday from 11 a.m. to 3 p.m.