Once upon a time, I used to live on the Upper West Side. I was within walking distance of a Trader Joe’s, Zara, Century 21, and TJ Maxx—heaven to a 20-something girl with Dom Perignon wishes but a Miller High Life budget. Consider nearby institutions like Columbia, Lincoln Center, and Gray’s Papaya, and it’s clear this area has a lot to offer, including a bustling restaurant scene I made it my mission to explore.

(I’ll eyeball a pair of shoes for months and never buy them, but place a steaming plate of spaghetti within my line of sight, and I’ll hand over my life savings without a second thought. Two bowls later, I’ll be bereft of funds but full of joie de vivre, but I digress…) 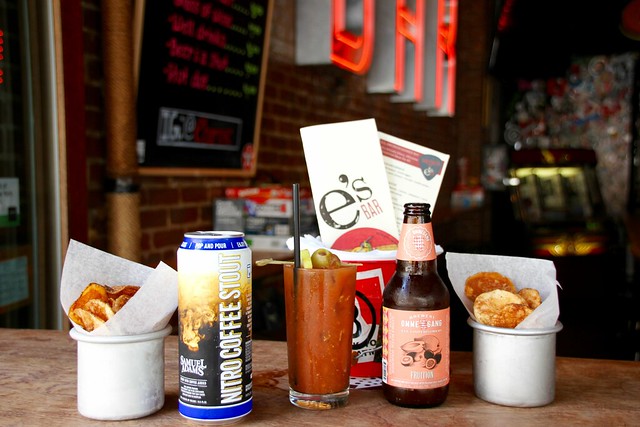 One place I always found myself coming back to on the Upper West Side was E’s Bar. I frequented this friendly, popular neighborhood spot for drinks with friends who lived nearby. Sometimes we played board games in the back room, but more often than not we had drinks outside on the sidewalk patio. The bar, neighbor to another UWS favorite, Jacob’s Pickle, was always crowded and always fun, but recently that block has been plagued by fires and water damage.

So when E’s Bar wrote to us that they were reopening after renovations and introducing a new brunch menu, I knew I had to accept the invitation to return to my old stomping ground, if only for nostalgia’s sake. Well, that and breakfast tacos.

My best friend, Emma, and her boyfriend, Nick, who were both in town from D.C., met me at E’s Bar before they headed to an afternoon matinee of Wicked. I arrived first to the (empty) restaurant and asked for Shawn, who, it turns out, I recognized from previous visits. We caught up for a moment, and Emma and Nick arrived shortly after. Our brunch trio had a choice of any seat in the house, and we chose one of two three-top counters that faces the street and immediately ordered a round of drinks.

Perhaps being back at this bar put me in a nighttime drinking frame of mind, because for some reason I ordered a breakfast beer—Ommegang Fruition, to be exact. It was absolutely delicious. You’re probably familiar with Ommegang Witte, a refreshing, easy-to-drink wheat ale, one I happen to order on the regular. Fruition takes that recipe and gives it a tropical twist with mango, kiwi, and passion fruit, and it’s probably one of the most drinkable beers I’ve ever had. It’s perfect for brunch—it’s actually perfect for whenever.

Emma went the traditional route with a Bloody Mary. She really enjoyed the homemade mix and thought the spice level was just right. Nick, a self-described beer snob thought it was “cool” that E’s Bar featured coffee beers with brunch and went for a Sam Adams Nitro Coffee Stout, a stout mixed with bittersweet chocolate notes and Sumatran and Indian coffees. Somehow he drank the whole thing and enjoyed it. (I could never!) We all enjoyed the free potato chips that accompanied our round of drinks. (NB: Keep an eye out for a new cocktail coming September 1, a pumpkin Moscow Mule featuring pumpkin vodka, lemon, ginger beer, and a sprinkle of cinnamon. Pumpkin spice latte lovers, this one’s for you.)

Ordering entrées was fairly easy, as there were only three things on the menu, all Mexican-inspired: huevos rancheros, a breakfast burrito, and breakfast tacos. We put in an order for one of each and settled in to gossip about people we know—I mean talk serious politics. 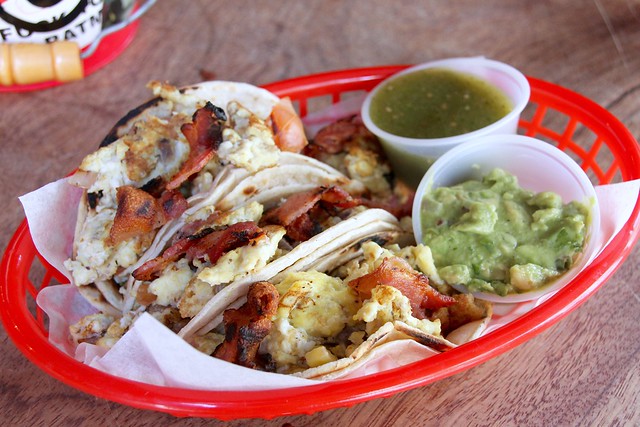 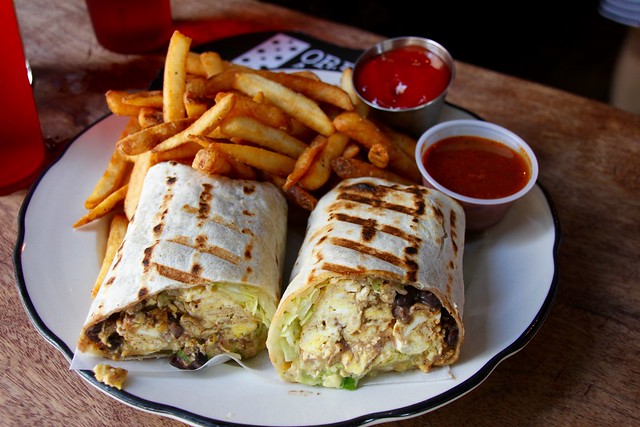 Emma’s breakfast burrito was much of the same—eggs inside of a pressed tortilla alongside shredded lettuce, sour cream, cheese, and black beans—but the salsa it came with upped the ante, and eventually I stole it to put on my dish (I like things spicy and flavor that’s just shy of knocking you out). She liked it, but not enough to prevent me from stealing half the burrito and all of the salsa. Sorry, not sorry. 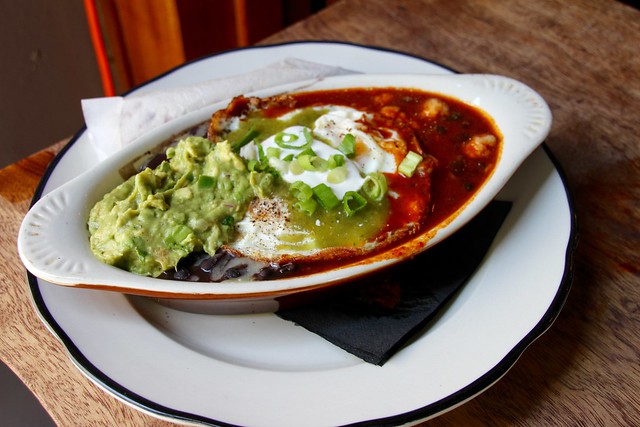 My dish, the huevos rancheros, was a nicely layered combination of black beans, fried eggs, guac, sour cream, and house-made salsas. I could have used a couple hits of Valentina or Cholula, but the dish was tasty and filling. 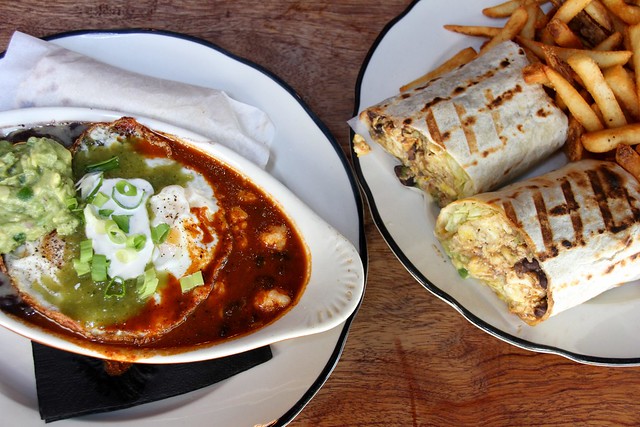 What’s more impressive than the quality of the dishes is the deal: Each meal is only $10 and comes with a brunch drink of your choice. A filling brunch at that value is hard to come by, especially on the Upper West Side. It’s a great value, and if I lived nearby, I would be there often. 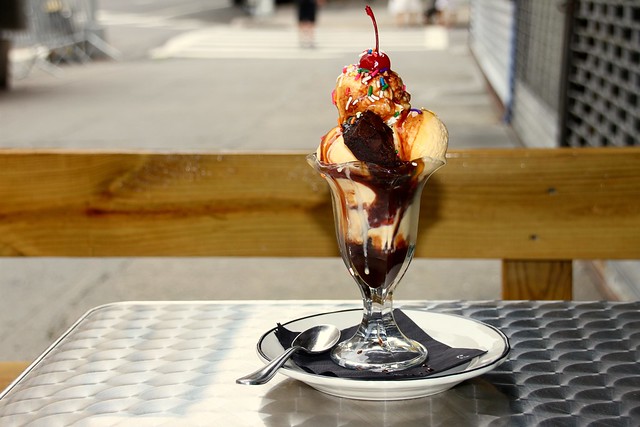 We almost left after our entrées, but Shawn persuaded us to try out the brownie sundae, and thank goodness he did. It was hands down the best part of our meal. A picture-perfect rendition of this classic dessert, the sundae piled vanilla ice cream on top of homemade brownie squares on top of hot fudge. Sometimes, when I really enjoy a bite of food, I do a little dance in my chair. And no lie, I was bouncing on my barstool with every bite.

Brunch at E’s Bar might not be the most innovative or impressive offering, but I’ll take a great deal and a tasty meal at a welcoming neighborhood go-to any day of the week.

The Bitches say: Four Flutes. The menu options at E’s Bar are limited for now, but these Mexican-inspired dishes are tasty, filling, and a great deal.