It’s been a long, carb-free few months and I woke up last weekend in serious need of a cheat. I started my Sunday with good intentions followed by even better intentions (in the form of brunch pizza and a brunch burger). First, my friend Christine and I headed to Williamsburg to check out Brooklyn Bodyburn and see what all the fuss was. I  walked into the class confident, feeling like after a year of consistent Barry’s Bootcamp-ing in preparation for my wedding, I could handle anything. I was proven wrong in the first 5 minutes during the Bodyburn “warm up”, when I was already taking breaks in the fetal position. I welcomed the misery in advance of my upcoming indulgence..it’s a perfect Sunday morning combo, really: Burn hard and brunch harder. 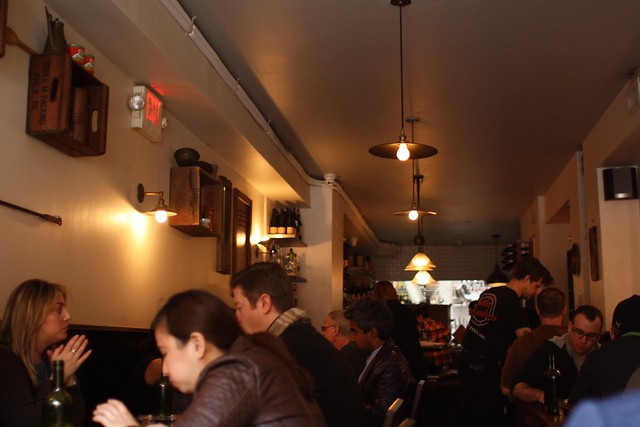 With that, we headed to Clinton Hill to open the brunch doors at Emily, resident hotspot and top of my “eat” list, and not just because we share the same wonderful name. I’ve heard friends liken the Emily burger to a caliber of Minetta Tavern. With such a rave and bold review, it was time for the true critic to pay Brooklyn a visit. 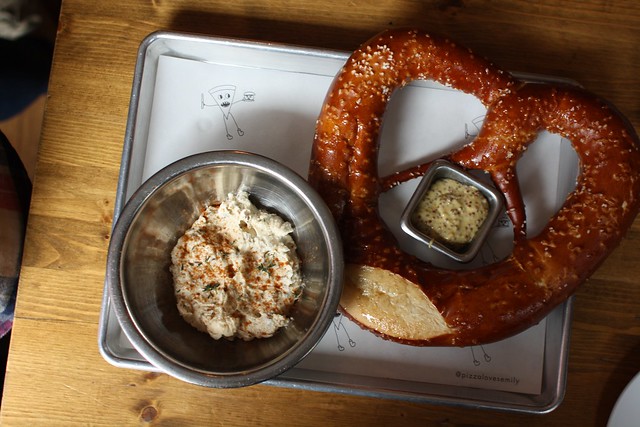 We sat down at the small restaurant and were immediately sold on the appetizer special – a soft, buttery pretzel the size of my face served with whipped beer cheese and spicy mustard. Because why not start a meal of carbs with a starter of carbs? The pretzel was warm and delicious, especially with the grainy mustard. The beer cheese was a little heavy for me, which was surprising as I normally love anything with cheese. We saved half the pretzel for later knowing what we were up against, and continued with our order. 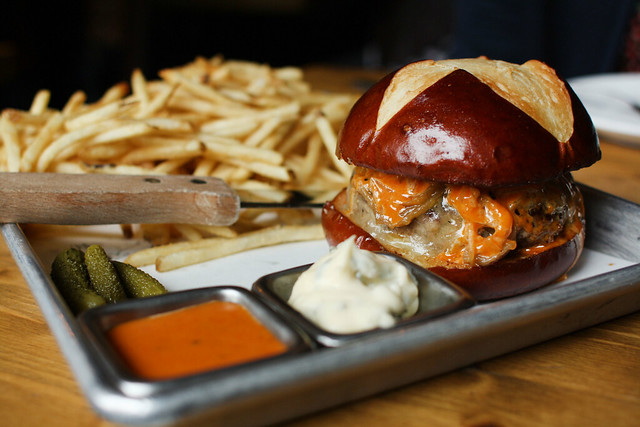 Unfortunately, Emily serves no coffee for brunch – not even cheap drip. I think if you’re going to be open for brunch hours, you’ve got to have some sort of caffeine that isn’t soda. The waitress told us we were welcome to go to a local spot and bring coffee back, but we weren’t very familiar with the neighborhood and were already settled in our seats. This was a first for me, but I powered through the caffeine headache. 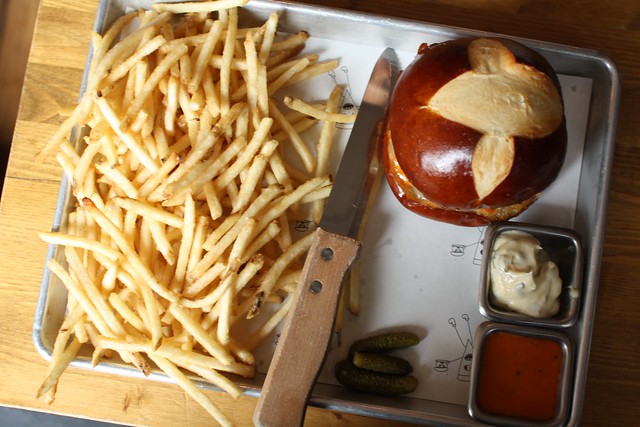 Now, it was time to sink our teeth into the famous Emmy burger, with Fleisher’s grass fed dry aged beef, a Tom Cat pretzel bun, Emmy sauce, caramelized onion, Grafton cheddar, cornichon and fries. This was a burger like no other. I can’t even compare it to others I’ve had, and we left not a crumb on the plate. 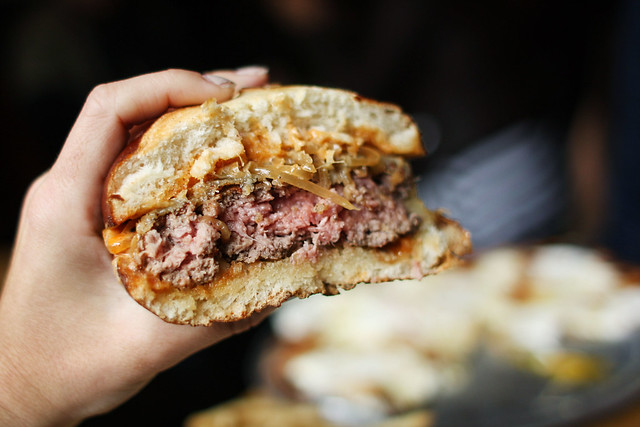 The combo of that special sauce with the salty pretzel bun sealed Emily’s fate before I even got to sample their claim to fame (the pizza). I haven’t stopped thinking about this burger since. Plus, they were super generous with the fries, which gave them further bonus points..not like they need it. 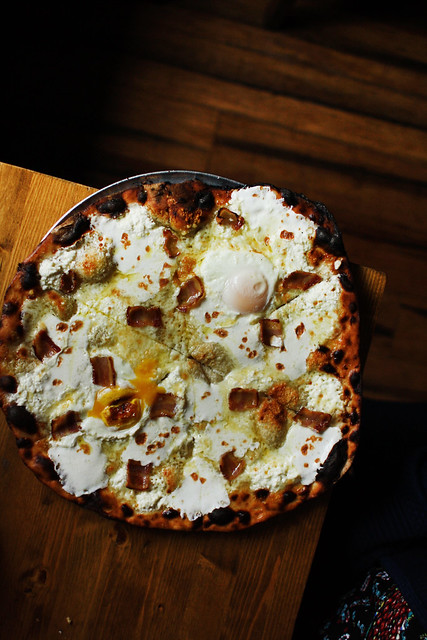 Christine and I also shared the Quinn pizza, a white pizza with mozzarella, havarti, pecorino and ricotta. Being that it was brunch, we topped it with two fried eggs and Benton’s bacon, which were both delicious additions. The pizza was large, thin-crusted, and so, so tasty. It’s up there with any other thin crust pizza I’ve had in the city and if I lived in Brooklyn, I’d be doing some serious damage here on a regular basis. 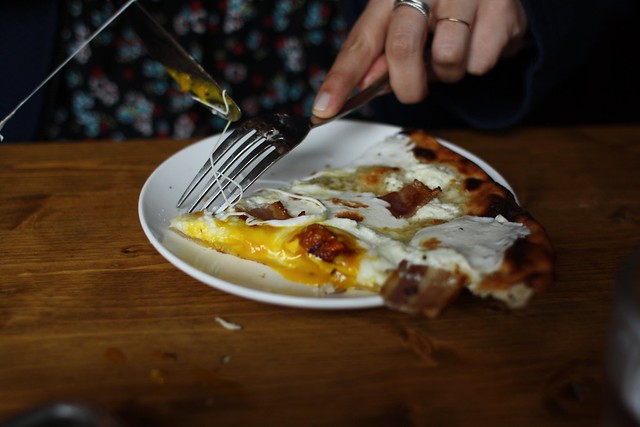 We couldn’t fit another thing in our stomachs despite a taunting dessert menu, so we packed up our takeaway boxes and headed home. Sometimes, you eat a heavy meal and you ask yourself “ugh, what was I thinking” all day long as you wallow in self-pity on the couch. Today was not one of those days. I felt like one million pizza-and-burger bucks. 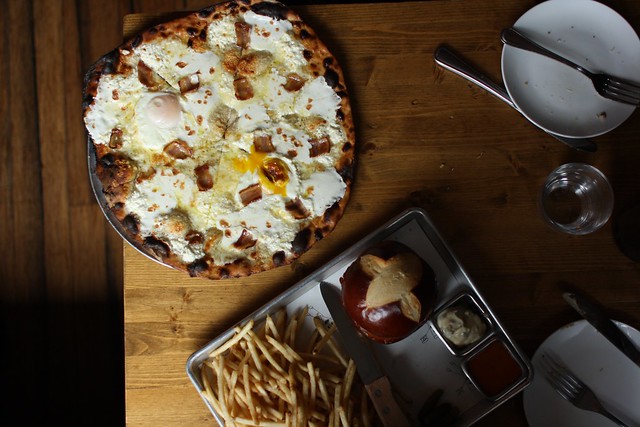 The Bitches say: A. For one of the best lunch-brunches in the boroughs and one of the best new burgers in the city, head to Emily ASAP. Everything, besides the lack of caffeine, was amazing.

Emily serves brunch on Sundays from 12 to 3 p.m.

One thought on “Emily Brunch”