Tucked away on the bustling corner of Illinois and Clark, Ema is a hidden gem in the River North neighborhood. From the outside, Ema doesn’t look like much, but once you step inside, the Mediterranean restaurant shows off a West Coast flair with crisp décor and sleek design. The monochromatic scheme combined with earthy elements (including an ivy-covered ceiling,) creates a warm and welcoming environment.

I do recommend making a reservation ahead of time here if you don’t like waiting. We were seated right away upon arriving, but several guests were told the next available table was over an hour wait. 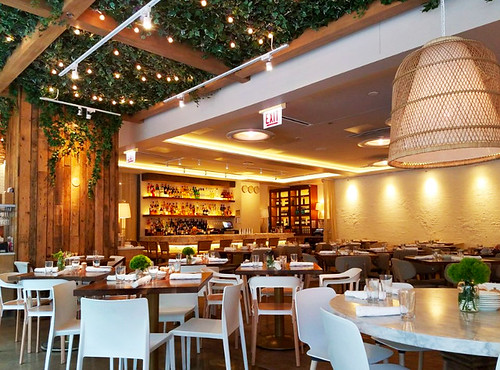 Once seated our waitress arrived right away to take our drink orders.  While the cocktail menu looked enticing, filled with bubbly citrus drinks, all with a Mediterranean twist of course; we were still reeling from the freezing weather here in Chicago, and instead opted for a warm coffee. They serve Big Shoulders Coffee, which is a locally-owned coffee roaster and café. The coffee did the trick in warming us up and giving us a much-needed caffeine jolt.

Our waitress informed us that the menu was comprised of mezze plates, to be shared, though she did note that the restaurant is accommodating for diners who do not wish to share. 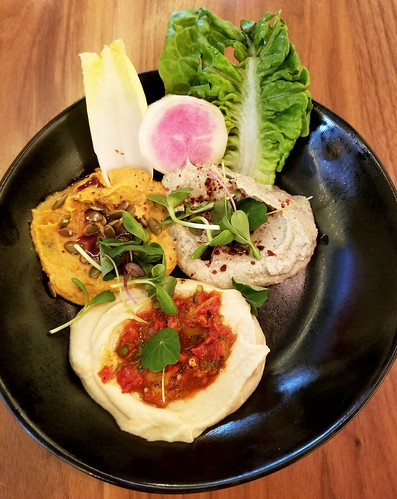 Ema is best known for its spreads, which includes several unique hummus dips, as well as charred eggplant and house-made labneh. We couldn’t decide on just one spread so we got the sample platter that comes with three spreads and house-made bread and crudité for dipping.  We chose the spicy hummus, charred eggplant, and the seasonal pumpkin hummus. The spreads were fantastic and just the right amount to start off our meal and not be too filling. We loved the spicy hummus topped with Ema’s signature harissa, and the eggplant was a wonderful combination of salty and smoky. The pumpkin hummus was good, but nothing special — we ordered it for the seasonal nostalgia but would definitely opt for one of the staple spreads next time, such as the mushroom and garlic hummus. 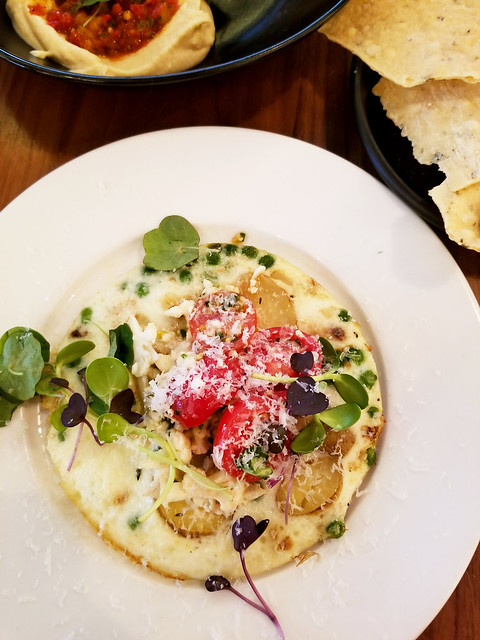 Next up was the egg white frittata. Now, I love a good fluffy frittata and I’m sad to say this one was a bit lacking. This dish was our least favorite of the meal — there was too much going on for such a small portion. The egg whites were paired with peas, cauliflower, tomatoes, pecorino, fresh herbs, and fingerling potatoes. Unfortunately, there were just too many ingredients in this dish and the competing flavors overpowered each other. With so many other amazing choices, I would recommend skipping this one.

Finally, after what seemed like a little too long for a meal of shared dishes, the Brussels sprouts and lamb kafta arrived. The Brussels sprouts were easily our favorite, they were perfectly crispy and charred. The sherry glaze gave them a sweet and tangy flavor, and the crispy shallots and pumpkin seeds added nice texture and crunch. 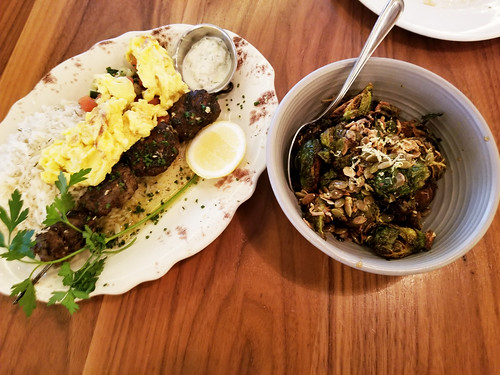 The lamb kafta kebab was cooked beautifully. Lamb can be hit or miss for me on the texture, but this was fantastic. It was juicy and seasoned to perfection. Add the tzatziki dipping sauce on top and that just took it to the next level. Even the rice was seasoned with lemon and dill, adding a fresh and light component to the dish, which paired nicely with the savory lamb.

The Bitches say: 4 flutes. Ema is a modern Mediterranean restaurant with a sleek Cali inspired feel, both in design and recipes. The food is flavorful, unique, and perfect for sharing.