Maple and Ash opened late last year, and has since been a great addition to the Gold Coast neighborhood. Known for its swanky interior, delightful cocktails, and the “I don’t give a f**k” option on its menu that is essentially the restaurant’s version of a chef’s tasting menu, Maple and Ash has become quite the social mecca of Chicago for weekend dinners and cocktails.

If you have been to Maple and Ash in the past, you will recall that the restaurant is located on the second floor, and order to get to it, you must walk through a restaurant and bar on the first floor. Though this first restaurant is a part of the brand, this is not Maple and Ash; it even has it’s own separate menu and cocktail list. Since opening, it has essentially been “the unnamed first floor restaurant.” 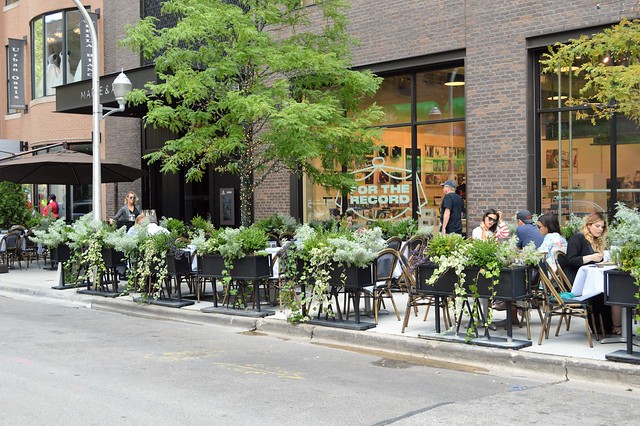 Well, things have changed people. A few weeks ago I received an email about the new name and concept of the, lesser known, first floor restaurant of Maple and Ash. Ladies and gentlemen, I present Eight Bar. 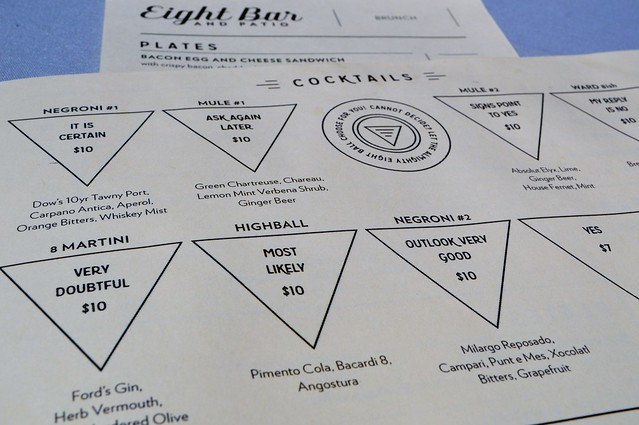 Eight Bar is named after the magic eight ball, with a cocktail menu inspired by the various responses one would get when asking a magic eight ball a question. For example, you can order a “Signs Point to Yes” and would receive a concoction composed of Absolut Elyx, lime, ginger beer, house fernet, and mint; delicious if you ask me. Or you could order a “Very Doubtful,” a spin on a dirty martini, made with Ford’s Gin, herb Vermouth, and thyme murdered olive; it sounds intense, but then again your fate isn’t looking too good, so you need a strong cocktail.

When I received the email announcement about the new restaurant concept, I asked when brunch would be available and if I could come in and check it out. My friend Adam Soko (yes, you know that name! Adam a.k.a #ChicagoFoodDude) does the restaurant’s social media, and I was delighted when he and the team arranged to have me in. 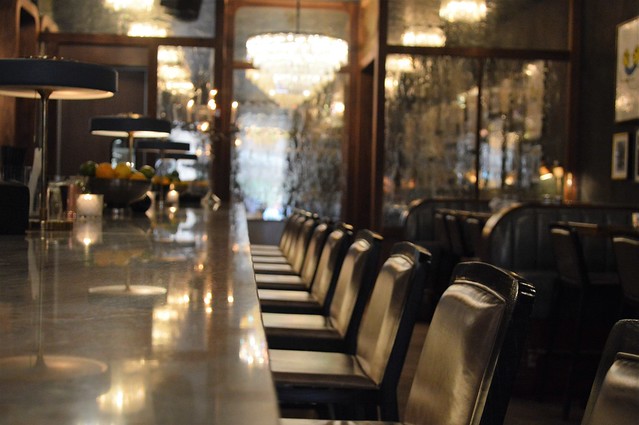 A sunny Sunday in August, a week or so after opening, Chris and I swung by Eight Bar to check out the brunch offerings. With the weather being perfect we chose a lovely patio table outside, on the gorgeous restaurant terrace. The restaurant has a beautiful, rich, interior, with a long bar leading to the back. Although cozy on the inside, we couldn’t resist enjoying one of the last weekends of summer in Chicago. 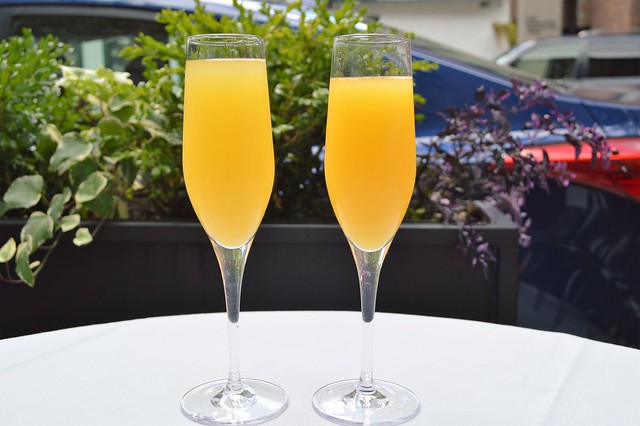 The menu is enticing, and though there is not a huge selection of dishes, of the items presented, they all sound deliciously tempting. Making a decision was difficult initially, so we went ahead and ordered two mimosas to start. 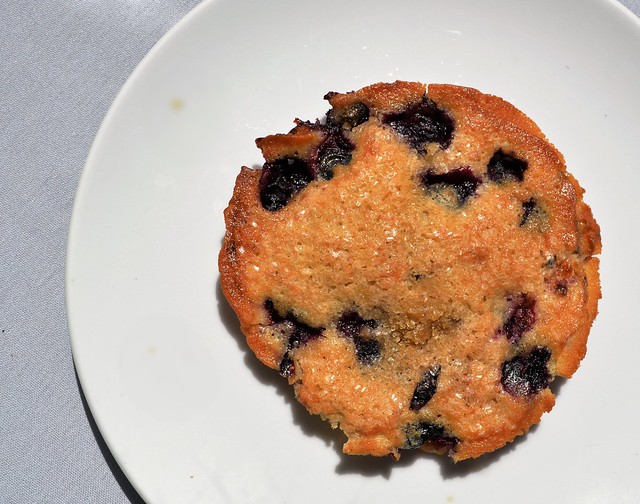 Eventually, we gave in to temptation and started to order things left and right. We were in the mood for coffee, and I am a sucker for a morning breakfast pastry to go with coffee any day, so I ordered the blueberry muffin to start.

The blueberry muffin came out a little more flat that your standard blueberry muffin. This made no difference at all, in fact it was a lot nicer to have something that was easy to pull apart as opposed to a crumbling regular ole’ muffin. It was warmed, and delicious; a perfect compliment to the coffee, which is Sparrow. 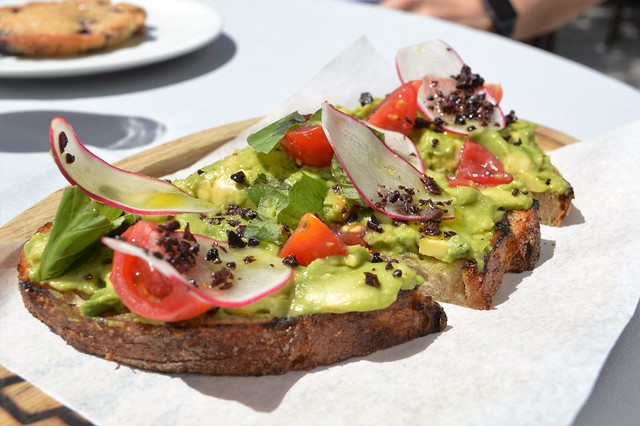 Okay, so if you read my reviews often (or follow me on Snapchat!) you will know that I am a self-proclaimed avocado addict. In my life “an avocado day keeps the doctor away.” I honestly have one almost everyday. I knew I had to have the avocado toast, and I guess it goes without saying, I had no regrets in making this choice. 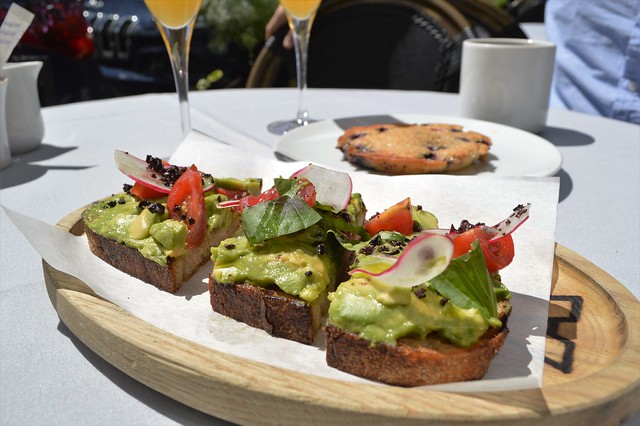 The avocado toast came out with a layer of smeared, chunky, beautiful avocado on crunchy toast, topped with radish slices, tomatoes, basil, and for the “cherry on top,” charred garlic. I didn’t recognize what the added crunch was on top, and I had to ask our server. It was so freaking good, of course it was garlic! Life changing, I swear!

For entrees, Chris and I were finally ready to decide. I was back and forth between two things, truth be told: the soft egg farm scramble, and the house dish, the Eight Bar hash, made with king crab and shrimp. Of course the server recommended the latter, and as a seafood lover, I obliged. 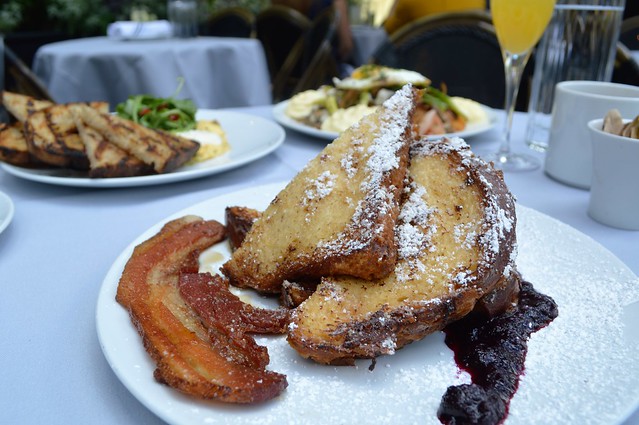 Chris opted for the Brioche French toast, as we had decided to share and wanted something sweet to compliment the savory hash.

When our entrees arrived to the table, I was surprised to find three, not two dishes. The server noted that he knew I was back and forth between the two dishes and thought it best to just bring them both out. How thoughtful— not to mention delicious! 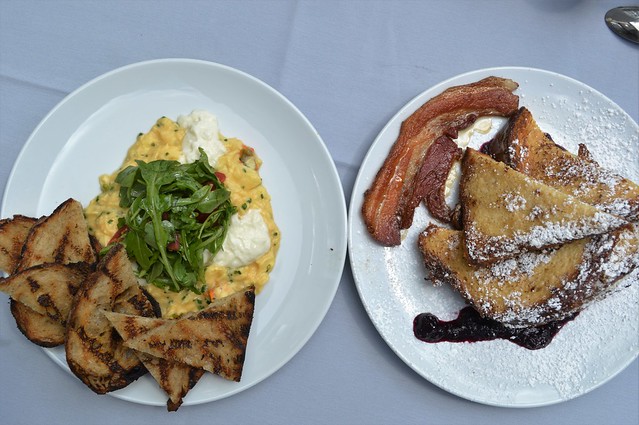 Chris and I dug in. The Brioche French toast looked lovely; made with mascarpone, it came on a bed of cherries, topped with confectioners sugar and a house-made mint-maple syrup, with a side of bacon. It was sweet, moist, and heavy, but not in a bad way. This is what French toast dreams are made of. 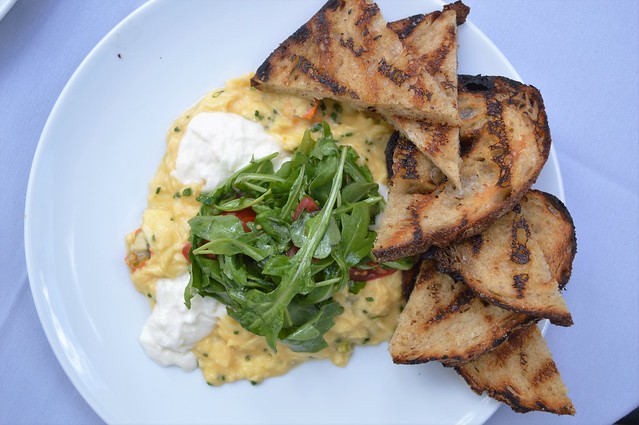 The soft egg farm scramble was awesome, and I am so glad I was able to try it. The eggs were scrambled perfectly, creamy and blanketed by burrata cheese, warming it up to a spreadable, gooey goodness. Sungold tomatoes and arugula were the perfect compliment, and black truffles mixed in just added to the rich flavor of this dish. I loved it and would certainly recommend it, not to mention order it again. 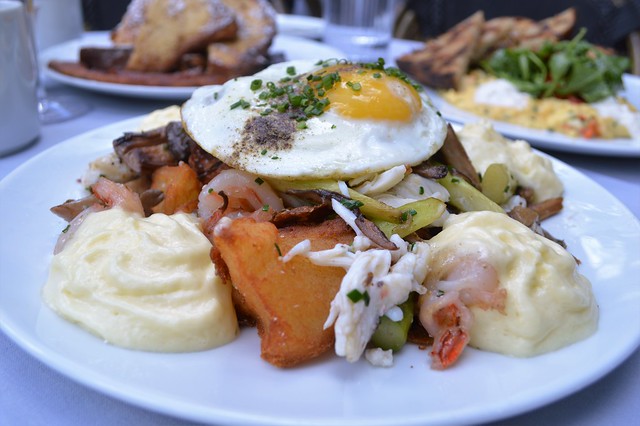 The Eight Bar hash came out bigger than I imagined. It was a massive plate of shrimp, chunks of king crab, mushrooms, and asparagus atop of crispy potatoes, with a fried egg. For being the big seafood dish, it certainly did not disappoint; I was bite-by-bite finding more and more crab meat as well as shrimp, which made me really happy. The crab was buttery and delicious, meanwhile the asparagus and mushrooms were cooked to perfection—still crispy, yet sauteed perfectly. 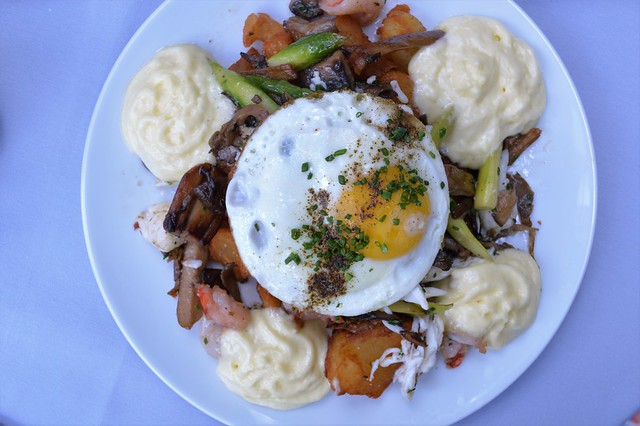 Large dollops of yuzu Hollandaise were on the plate, though, I wasn’t the biggest fan. The seafood and vegetables were buttery and sauteed enough, that the extra creaminess from the Hollandaise wasn’t needed in my opinion.

I dipped a few bites in it, so some people might enjoy it, but I don’t think four giant dollops was necessary. I think that the dish without it, or less of it, would be just fine, if not better! Nonetheless, this dish was fantastic, and if you love seafood, I would say go for it. I normally am not big on breakfast seafood dishes, with the exception of crab eggs Benedict, so I was really glad I went with this entree. 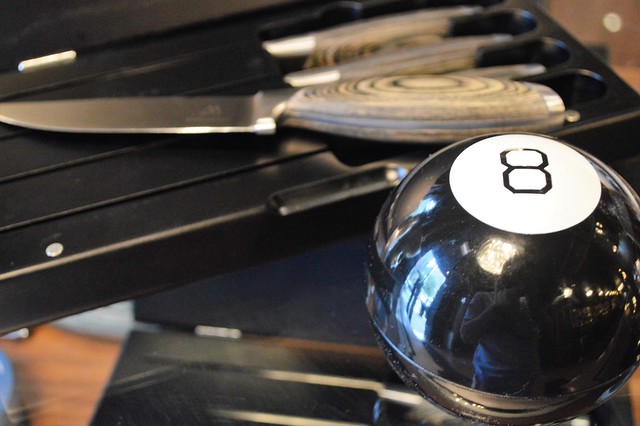 This is a lovely place to come for weekend brunch, though definitely don’t come in your pajamas, as to be expected of most spots in the Gold Coast. Perfect for a pre-shopping brunch with girlfriends, or a nice place to take your mother-in-law when she is in town, Eight Bar is sure to please everyone… with the exception of your husband, maybe, when football is on. I look forward to coming in for dinner and cocktails in the future. Do you think the lucky eight ball predicted that?

The Bitches Say: A. Eight Bar is a beautiful, upscale-ish new spot in the Gold Coast with delicious and unique brunch offerings. Highlights include the brioche French toast and the Eight Bar hash, a seafood lover’s brunch dream!