St. Patrick’s Day in Chicago is a double-brunch weekend. First was Kaiser Tiger, and second was a far more refined and mellow, Eden. My friend Sarah was in town for St. Patrick’s Day and was staying with my friend Britt. I had met up with the two of them for brunch on Saturday, but wasn’t able to spend Saturday afternoon and evening with them. I wanted to catch up with Sarah before she headed back to Indianapolis, so the three of us decided to grab brunch. 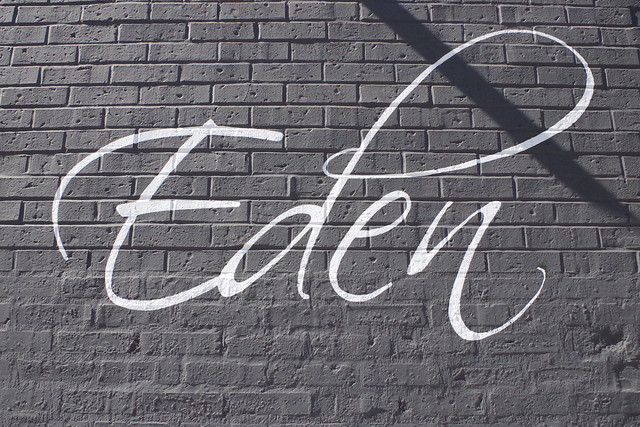 I found a brand new place for brunch on Instagram called Eden. I browsed the menu, and all the dishes sounded good, so I told the ladies this was where we were going. Being that the two of them are early birds, we got to brunch at 11 a.m. right when Eden opened. 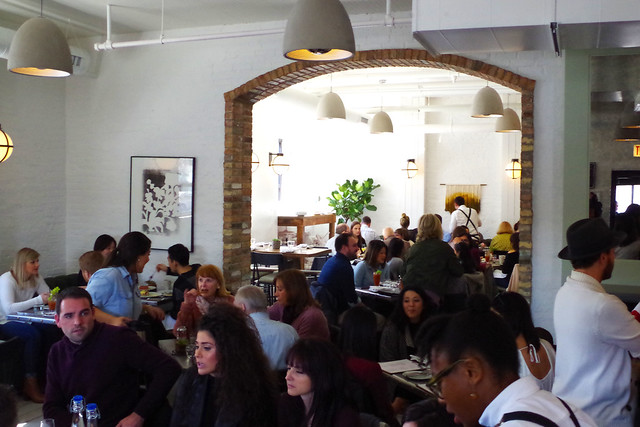 Unbeknownst to us, this was Eden’s first day of brunch service and were booked solid with reservations—bravo, Eden! The only space they could manage to for us was the chef’s bar in the back room of the restaurant. 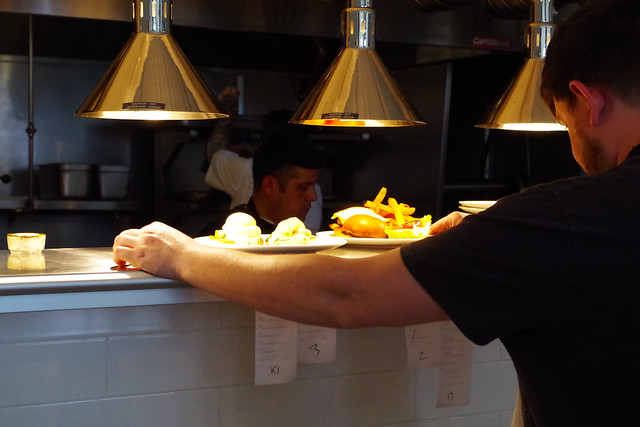 The three of us made our way to the chef’s bar, and began to peruse the menu and chat about the previous night’s festivities. Eden has a beautiful interior with white brick walls, large windows that provide lots of light, and simple decor that doesn’t detract from the airy space. 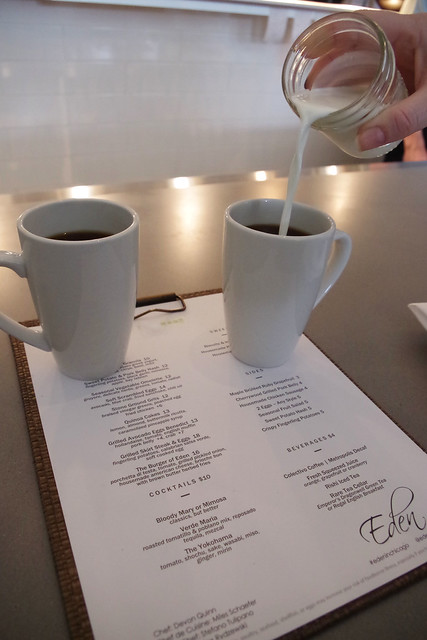 Sarah, Britt, and I all ordered coffee to jumpstart our morning brunch together. We were all tired: Sarah partied like a champion all throughout St. Patrick’s Day weekend, Britt attended a wedding Saturday, and I hosted a flower crown station at a baby shower all of Saturday night. We were in need of caffeine.

The coffee was a standard, basic blend of coffee that came with a side of cream and sugar. It was not refilled as quickly as we all would have hoped, but thankfully we all had other beverages to sip on, while the service was slow. 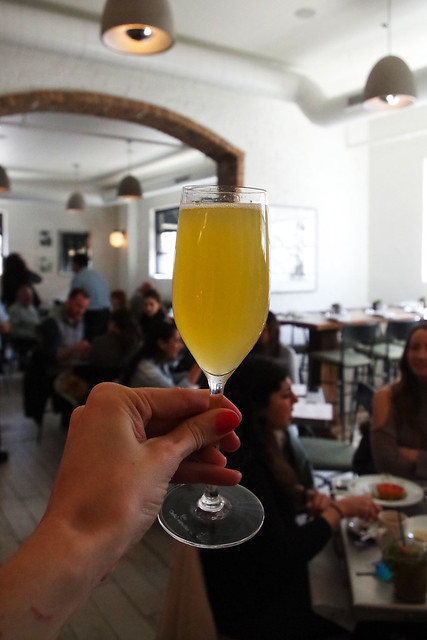 Britt and I ordered mimosas, along with our cups of java. The menu quips that Eden’s mimosas are “the classics, but better.” Britt playfully inquired to our waiter as to what made these mimosas “better,” and our waiter stated that Eden’s mimosas had “fresh squeezed orange juice”—forgive me, but that’s not unique and while fresh orange juice can make a mimosa better, it doesn’t give you an edge.

So, I’m sorry to report, but these mimosas were standard mimosas—nothing better or worse than any other bubbly orange juice and Champagne/Prosecco confection I’ve imbibed at brunch. 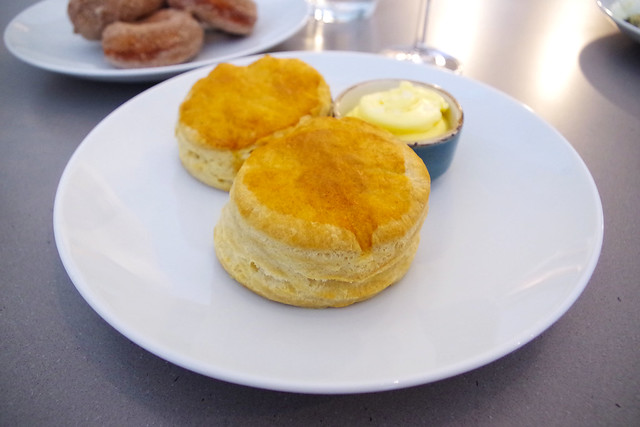 To snack on before our entrees, we all ordered the biscuits with honey butter, and the homemade doughnuts. The biscuits’ appearance was that of Pillsbury, as they were large, round, and had the layered look. Thankfully, these were not Pillsbury and were delightfully warm, buttery, and flaky. The honey butter was a nice addition and added a bit of a Southern sweetness. 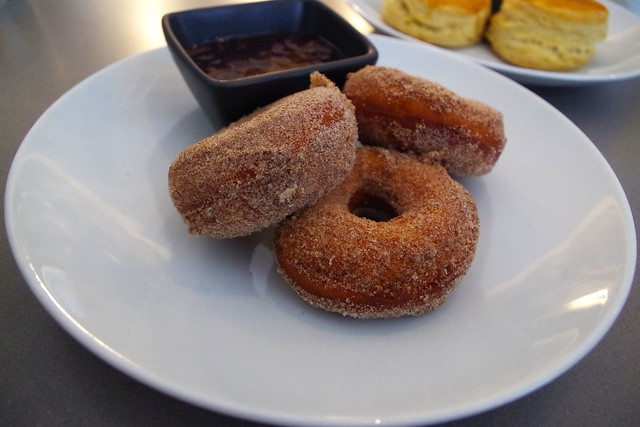 The homemade doughnuts were covered in cinnamon and sugar, and came with a mystery jam on the side. All of us enjoyed the doughnuts, but they were a bit dry for my liking. Perhaps the mystery jam would have added some much needed moisture. 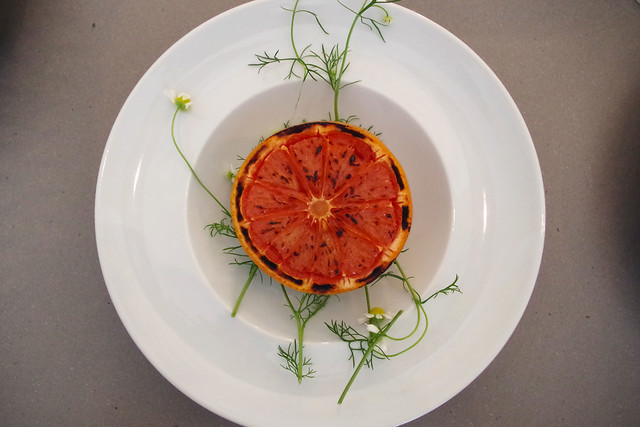 As an appetizer for myself, simply because I was curious, I ordered the maple brûléed ruby grapefruit. The dish came out like a picture from a magazine—a half of a grapefruit sitting on fresh chamomile, and perfectly torched with a maple glaze that crystallized and added an extra element of sweetness to the dish. I really enjoyed this, as it was light, refreshing, and unique. 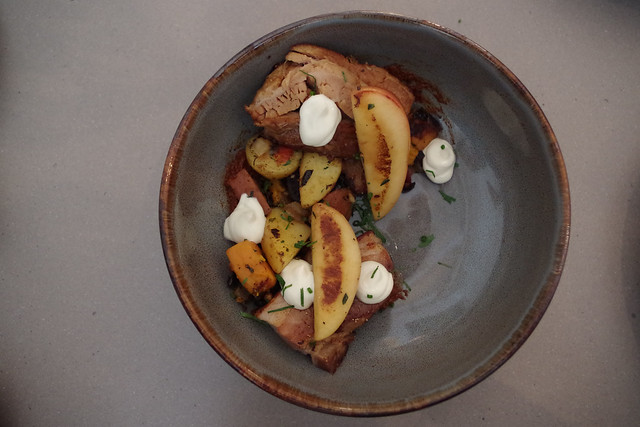 Next up were the entrees, and Sarah honed in on the pork belly hash with sweet potato, black garlic romesco, apple, and bay labneh. Considering that Sarah was in need of a great hangover dish, this turned out to be the perfect dish for her. It was flavorful and filling.

The one downfall was that since we were seated at the chef’s bar, we could see the dishes coming out of the kitchen. We saw the proportions of the dishes being taken to different tables varied fairly drastically in size. For instance, Sarah’s portion of pork belly hash was about half of what we had seen come out of the kitchen for other tables. Needless to say, we felt like we got the short end of the stick. 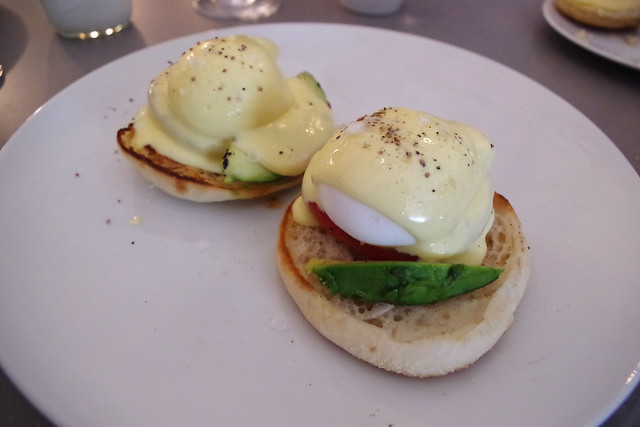 Britt decided on the grilled avocado eggs Benedict. The eggs Benny had a standard Hollandaise, tomato, and avocado on an English muffin. With the name “avocado eggs Benedict,” you’d think that avocado would be one of the main ingredients, instead of just an accent. Unfortunately it was nothing but a simple wedge of avocado on an English muffin. I was hoping that the avocado would be creatively incorporated into the Hollandaise, or be more prominent in the dish, but it was underwhelming. 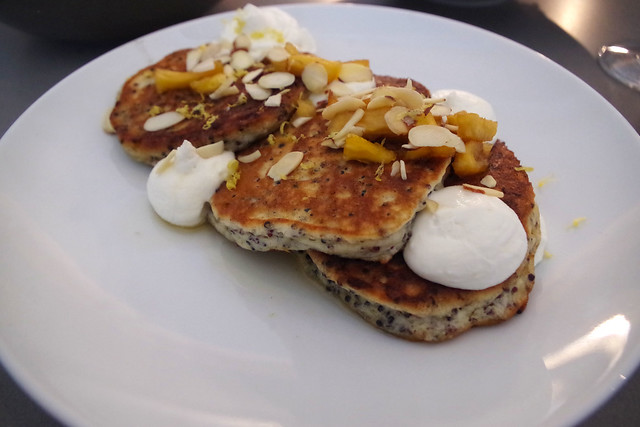 I decided on the quinoa cakes, as my sweet tooth had the better of me this Sunday. They were a clever quinoa cake with lemon, almond, buttermilk ricotta, and caramelized pineapple syrup. I adored this dish. It was unique, delicious, and truly made me feel as if I was eating pancakes.

Somehow I lucked out at this brunch, but there were several issues throughout the meal that left a sour taste in my mouth. I understood the lack of space, but then slow service, inconsistent dish proportions, and subpar pastries left me feeling that something was amiss. Opening weekend wasn’t memorable in our book, but there is always hope for improvements in the future.

The Bitches say: C. The menu has some creative, thoughtful dishes, but a lot of them were not. Considering the amount of amazing brunch spots in the city, I hope Eden revamps the brunch service to compete.