Nestled in the quaint and tree-lined West Village neighborhood of Manhattan is a place called Due West. Think swanky crushed velvet booths, gold accented chairs, marble top cafe tables and, to keep things both humble and personable, some flat screen TVs playing sports. Somehow it really works. You can come here for a low profile brunch or to turn up a little while watching your team play.

Seated by the dark framed windows, watching bright yellow taxis go by and happy couples walk their little French bulldogs, it was time to order some drinks. The cocktail list is interesting and creative. After deliberation, we ordered the Nitro Boost and World Cup. 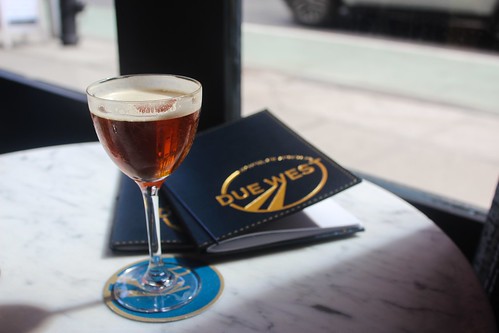 The Nitro Boost is a coffee-based cocktail but it differs from the foamy and sweet espresso martini. This one tastes more like cold brew (because it is) with a bourbon kick (and a strong one at that, but the Madagascan Vanilla balances it out). It is presented in a Nick and Nora glass with a pretty chisel detail, serving as a bit of a juxtaposition to the bite the cocktail has. 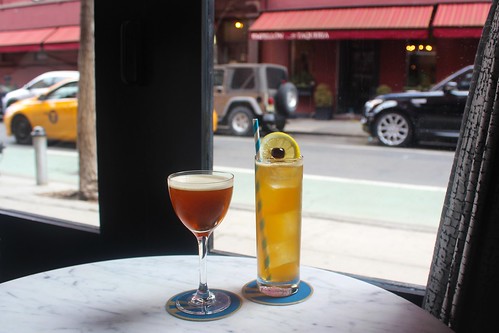 Second choice was the World Cup, like a Pimm’s Cup but better! With gin, Pimm’s, cucumber, ginger, and lime served in a tall glass with a cherry on top (actually though,) this one is super duper tasty and PERFECT for summer sipping. It doesn’t taste much like alcohol and when it does it’s the Pimm’s that shines through. Beware how easily this one goes down.

As for food, the brunch menu has a broad selection of traditional dishes from baked eggs, eggs and avocado, and breakfast rolls, to crab dip and oysters. Yes, oysters! But on this particular occasion an order for its enticing fried chicken burger, egg and avocado toast, and pancake was placed. 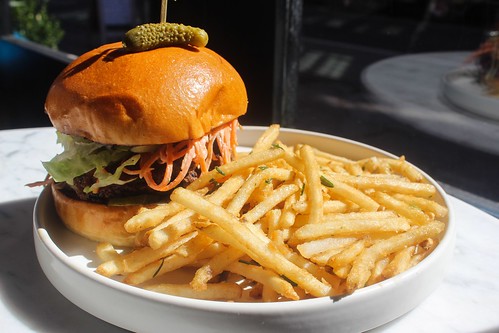 The fried chicken burger came with slaw and a side of rosemary fries that were oh-so good. The chicken was delicious — juicy and crispy just the way we like it. The spicy carrot slaw was the perfect accompaniment providing a bit of extra flavor to the burger but not too much that it contends with the superstar chicken. All of this came with a good sized serving of rosemary French fries with chunks of rock salt scattered over them, just in case you were going to confuse them for McDonald’s fries. They want to be in a league of their own. 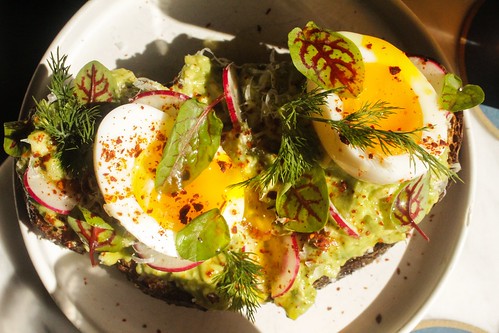 Next up, the eggs and avocado toast. Served with cheddar and radish, it was a nice little variant from the oh-so popular smashed avocado that we’ve seen take a hold of the brunch scene. Here, the poached egg is served cut in half and butterflied open atop the avocado so the moment it lands at your table you can see all the colors of the dish. The bread is thick and not toasted hard which is already a plus (because who wants to use a steak knife on bread). The avocado is fresh, and the radish adds a nice little crunch to the texture of the dish. The eggs, I’ll say again, are fantastic and dare I mention, perfectly poached. 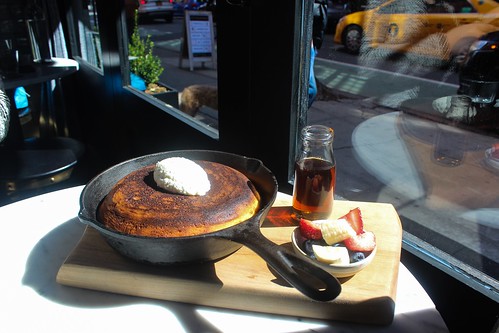 For something sweet, the Due West pancake was a no-brainer. It comes out inside the skillet with a ricotta dollop on top in the middle, your syrup and berries just to the side. There’s something so satisfying about pouring syrup over pancakes and in this scenario the syrup should be drizzled over the ricotta, helping to break it up. When you’re ready, throw your berries on there and dig in. Taste-wise it’s almost like any souffle pancake, super thick and airy in the middle. What sets it apart is the ricotta which has some kind of herb and zest mixed in with it. This elevates the game. This is a good dish for a sweet tooth or if you’re looking to share something on the side.

The Bitches say: Four Champagne flutes. Due West seems like the kind of place that you can file under “old faithful.” They offer a good, solid brunch and it can serve as your local watering hole come 5 p.m. (or sooner, we won’t judge).

Due West serves brunch on Saturday and Sunday from 12 p.m.-4 p.m.