There’s little I love more than summer days by the pool and brunch—so I relish any opportunity to combine both. I was unsure what to expect at brunch at the Donovan House, as people eating in swimsuits kind of weirds me out. But, Steph had really enjoyed brunch last year, and I found the descriptions of their poolside cocktails particularly enticing. Alcoholic popsicles? Sign me up.

I was brunching with my Aussie boyfriend and our new couple friends, Ben and Brianna. Or, I should say, my new couple friends. They are his friends—I am still trying to earn my social standing, and I have to say this brunch did not aid in that pursuit. As for what the four of us bring to the (brunch) table: Ben brings the snark, the Aussie brings the accent, and Brianna brings an enthusiastically adorable Corgi with his own social media presence. I was hoping to add my token gift for scheduling fun activities, but again this brunch could have gone better.

It was a cloudy day when we arrived in Logan Circle and took the elevator up to the roof at the Donovan House, which was packed with a diverse crowd and a chill vibe—most people were lounging around, drinking cocktails, and bobbing their heads to the DJ’s tunes. Everyone was friendly, but it was far from wild—which I prefer. That said, the mood kind of matched the weather, which is to say it was dreary. 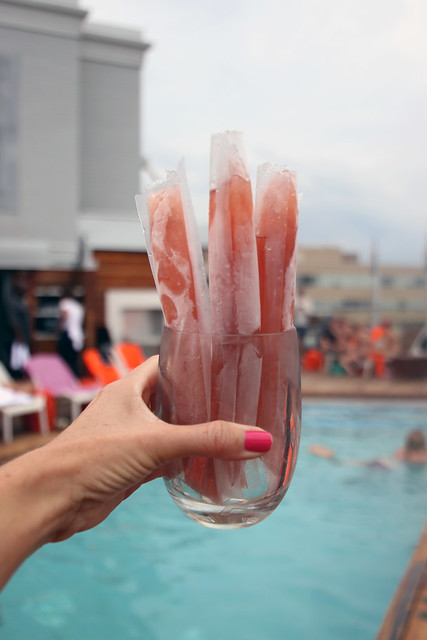 Things began on a high note with a corner table and a round of Selfie Sticks, the boozy popsicles flavored like plum wine. Brianna loves plum wine, and we all agreed these were flavorful and not too sweet.

In an effort to woo millennials, the DNV Rooftop’s cocktails are inspired by social media and text messaging, with names like #TBT, NSFW, the Friendzone, and Too Long, Didn’t Read. I ordered the Friend Zone, as it is my tendency to order cocktails in coconuts. It was essentially coconut water and rum, which tasted fine but actually not as good as you would expect. 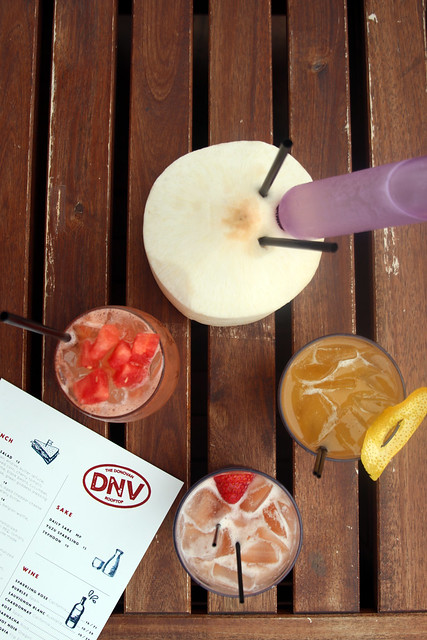 Brianna’s Error 404 was the group favorite, a light watermelon cocktail with Yuzu, lemongrass, and Shozu. It was crisp, refreshing, and had an interesting flavor combination of watermelon with tart Asian flavors. 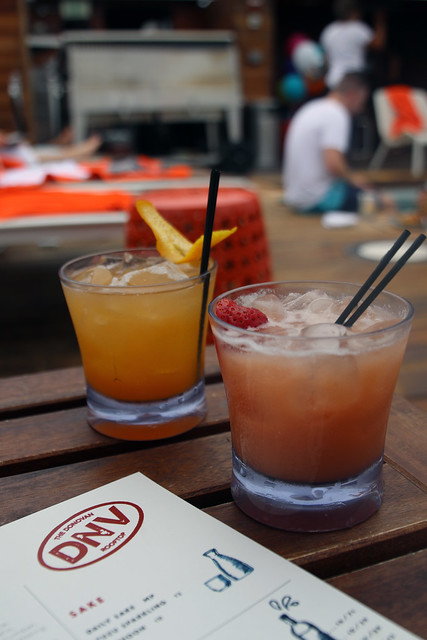 The boys found their cocktails to be far too saccharine—and we all switched to our preferred beverages (beer, whiskey, mimosas) after the first round of tropical syrups inspired by millennials.

Ben, a breakfast burrito connoisseur, was sadly disappointed with his burrito. The burrito was massive, and served with delicious, crispy kettle chips. But, the burrito was all show and no substance—after one bite, it quickly fell apart. And, he was disappointed that there were no eggs. “I thought that a breakfast burrito, by definition, contained eggs,” he said, in his typical dry tone. It did have hearty vegetables: massive Portobello mushrooms, roasted peppers, summer squash, and avocado, in a flour wrap slathered with chipotle aioli. But, what about the eggs? 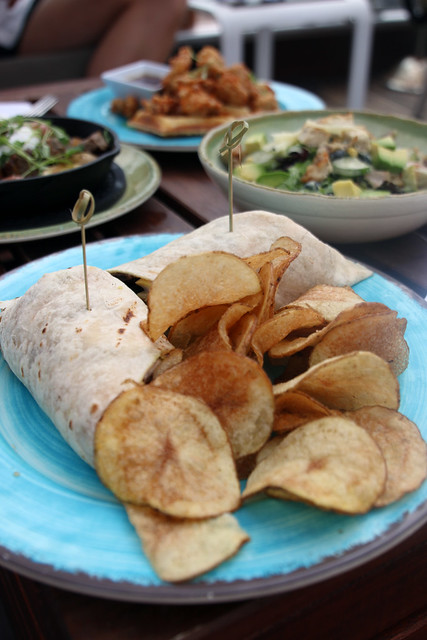 Meanwhile, Brianna’s salad was similarly lackluster. The chopped salad, with grilled chicken avocado, shelled edamame, Manchego, tomatoes, and other delightful accoutrement, sounded like a salad-lovers dream. In actually, she reported that it was just so-so, and the dressing was visibly excessive.

Naturally, I felt a good bit of guilt for the lackluster meal, given that this was their first occasion brunching with this little Bitch. The beau seemed nonplussed, and we hopped in the pool between courses. When it started raining, I took on second-hand guilt for the weather. This would not be a day free of personal blame. (But the mimosas helped.) 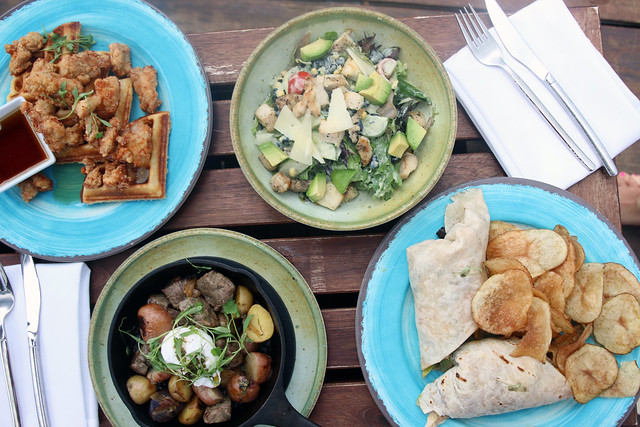 Fortunately, the beau experienced no such guilt and we both ordered shareable dishes. The chicken and waffles and steak and eggs were both crafted in such a way that they’re easy to be shared among a group—bravo! 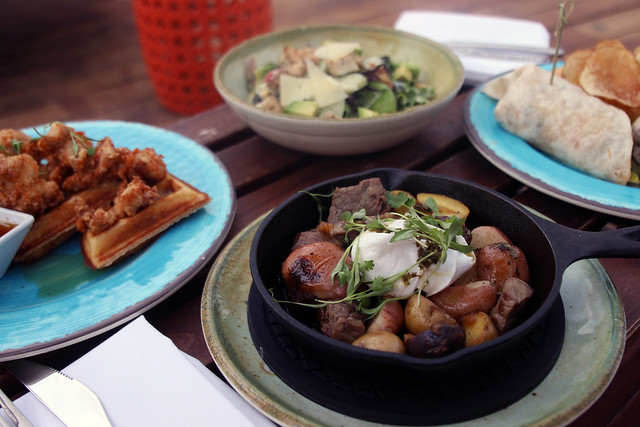 The steak and eggs was served in a skillet, with bite-sized chunks of Wagyu beef, halves of petite round potatoes, and a few easily-split poached eggs. Plus, the bottom of the skillet had caramelized onions and a shiso chimichurri for some flavor. The beef could have been better, but we enjoyed the flavor and the shareability. 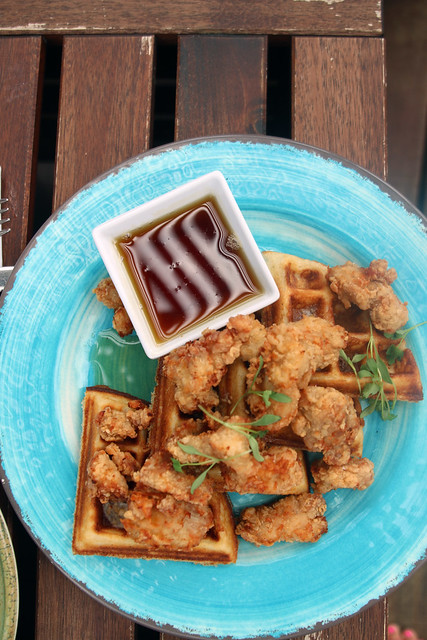 Meanwhile, the chicken and waffles was both shareable and incredible. The waffle was split into four quarters, and incredibly moist and fluffy. It was topped with a cashew butter, which added a rich sweetness. The fried chicken was crispy on the outside, and moist on the inside, and was served in nuggets, rather than strips. This made it super easy for all for of us to dig in and enjoy. 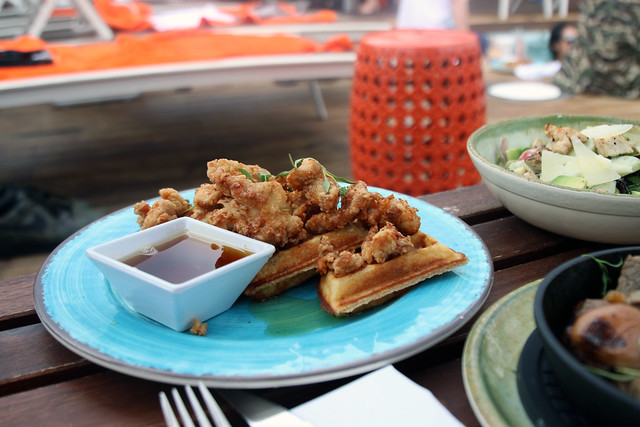 Our waitress, Anise, was lovely, but scatterbrained—a result of the fact that she was the only person manning the entire rooftop. A flaw in the structure, not in the person. At the beginning of our meal, she was super attentive, bringing over multiple rounds of cocktails. But, toward the end of the meal, she was flustered, busy, and forgetful. She forgot both the burger and the beignets. We reminded her, then she brought over the beignets, then, took them away, but brought the burger. We reminded her, she returned with the same beignets, which she had ferried elsewhere. We felt sorry that she didn’t have the support she needed.

When my burger did arrive, it was one of the better dishes we sampled. And, fortunately, it wasn’t cold. The burger was thick, perfectly cooked medium rare, and good meat. The bun was soft and fluffy—a hybrid between a white and potato bun. The burger was enveloped further with fresh Bibb lettuce, and also dressed with tomato, caramelized onions, and slathered with a flavorful Asian BBQ sauce. This was a top-notch burger. It would have been even better if it hadn’t been sitting in the rain. 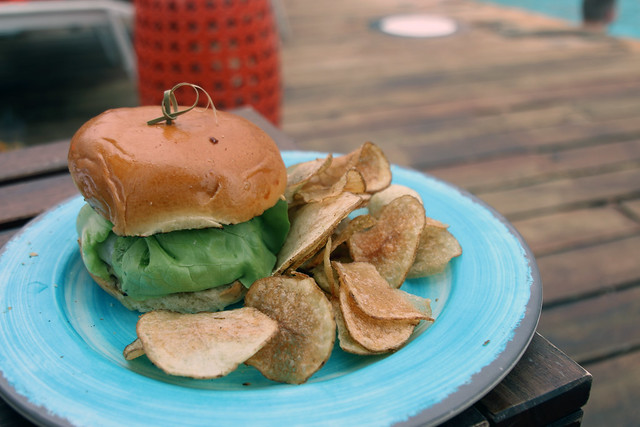 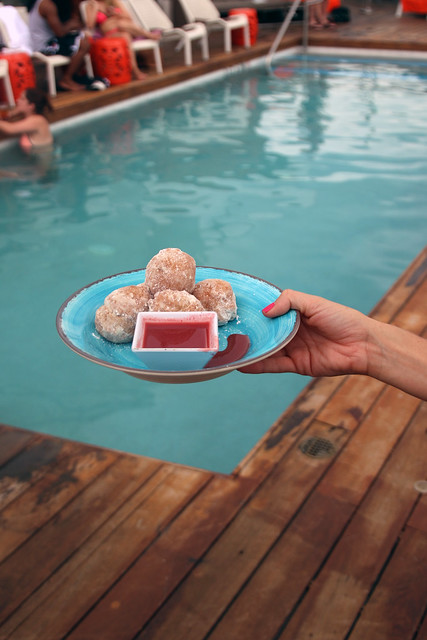 The Bitches say: C+. We love the concept of a rooftop brunch with playful cocktails and good vibes. But, the execution was off, with some dishes being delicious and others being downright disappointing. The service was sporadic—as was the rain. And, the pool itself could use some tidying.