The Bitches will be the first to tell you that D.C. needs more party brunches. We’ve done La Boum and others in the past — but it’s definitely been awhile for us Bitches. Luckily I had an invitation from DJ India (a.k.a. the house DJ at Madam’s Organ) to try Watch Your Manor, the drag brunch at The Manor.

Always up for a new experience, I brought three of my best Bitches from college. We’d had way too much wine the night prior and were not mentally prepared for a party brunch beginning at 11 a.m. Upon entry, we told our waiter that we needed to hydrate, STAT, and were rewarded with a glass of water and a shot of Southern Comfort. So that’s how the day was going to go. 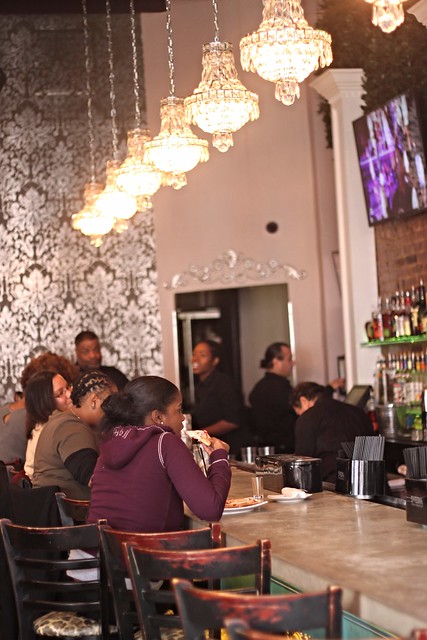 The Manor, tucked away in Dupont Circle, feels like a nightclub in an English living room. With high windows, a nice bar, and Victorian accents, the Manor feels like a club fit for a Queen. We settled into our sunny table by the bar and perused the menu. 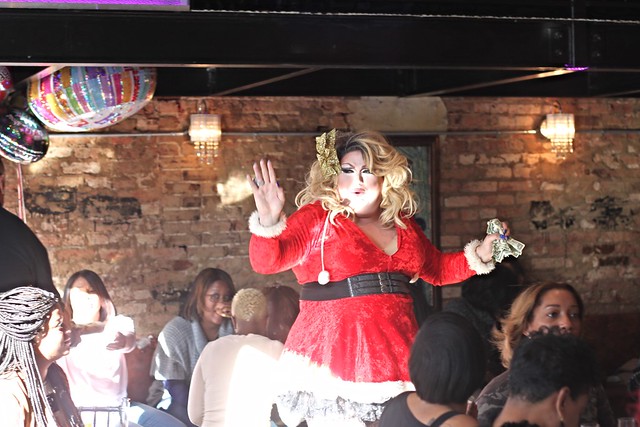 The Manor offers a bottomless drinks deal – you can get unlimited mimosas in orange, grapefruit, and pomegranate for $20. By themselves, mimosas run for $8 a piece. But with the performance you’re about to witness, you’re going to want more than two. After messing up my flavor request of mimosa, our waiter brought us the champagne and juice in an ice bucket so we could refill at our leisure. 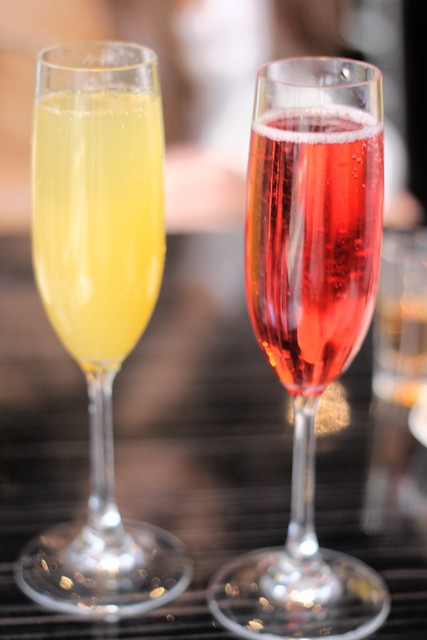 As any frequent brunch-goer knows, bottomless, party brunches usually serve terrible food. So we were pleasantly surprised by the variety of menu choices. My friend Nikki ordered the almond crusted brioche French toast. Topped with mixed berries, whipped cream, vanilla-mint syrup, and creme Anglaise, it was the prettiest dish on the table. The toast was a little dry but if you let it soak up the toppings, it was pretty good. 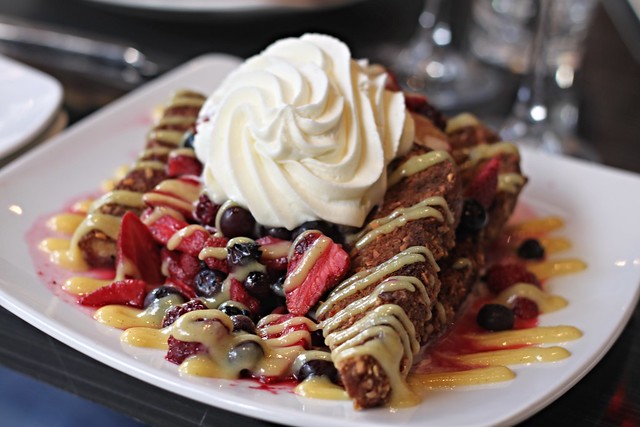 Steph has never met a potato she didn’t like, so she was intrigued by the baked potato omelet. Turns out, it wasn’t a baked potato, but an omelet with buttermilk mashed potatoes, pecan smoked bacon, gruyere cheese, sour cream, scallions, and home fries on the side. Presentation was flat (literally just potatoes, bacon and egg on top) but was a hearty dish. 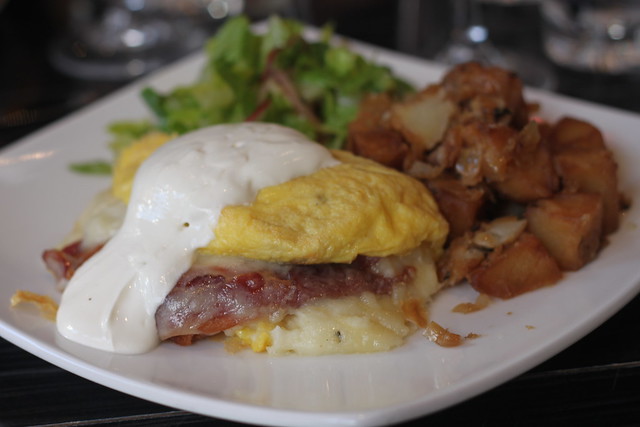 I can always count on Hannah for an eggs Benedict order. Her Benny was typical – black forest ham, braised spinach, poached eggs, on an English muffin with Hollandaise sauce. The home fries on the side were great, though. 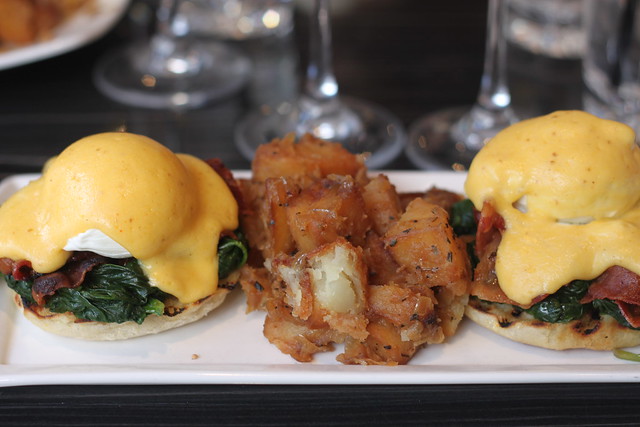 I had the California chicken pizza, which was surprising to see on a brunch menu, but tasted good. The pizza came topped with grilled chicken, peppers, onions, and a caramel-soy and fresh cucumber and basil salad. I wished it had been a proper brunch pizza, with an egg on top—and sans salad—but it was quite tasty nonetheless. 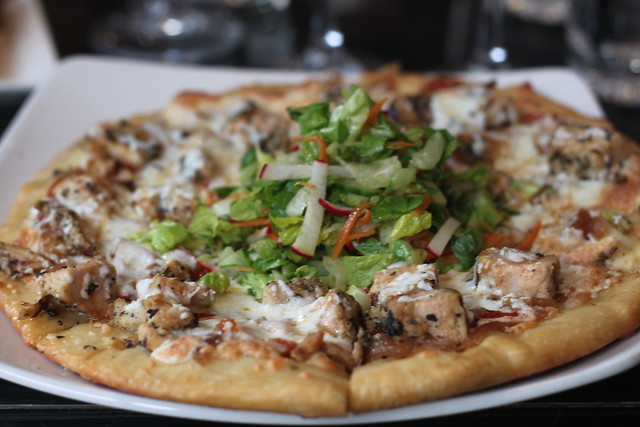 Our server had warned us that it was his first day on the job so he, understandably, wasn’t very good. After delivering the wrong flavor of mimosa, he brought us an entire entree that we didn’t order. It was your basic bacon, eggs, and sausage plate—called the Good Morning—I wouldn’t recommend it. This wasn’t a problem, until he tried to charge us for it after. But, he was very sweet and the rest of the staff was so hospitable that we overlooked it. 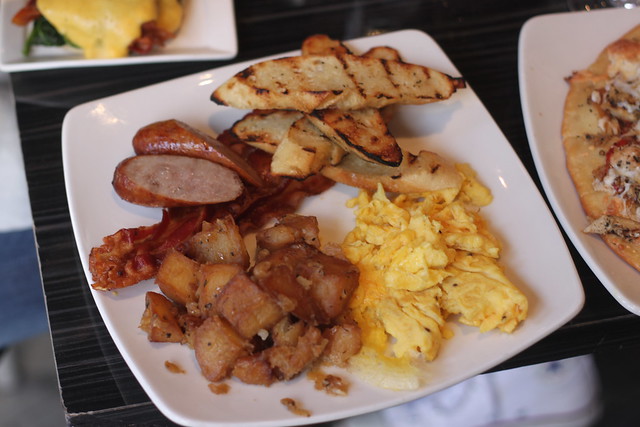 Plus, we were really there for the show. The music was bumping throughout the meal and we were ready to party. Pro tip: bring cash (preferably $1s, although the staff kindly made change) to tip the performers. They deserve it. There were three Queens, channeling all our favorite divas: Janet Jackson, Tina Turner, Mariah Carey, Whitney Houston, Beyonce, and Adele. I don’t want to spoil the show for you, but Sasha Fierce brought the house down. 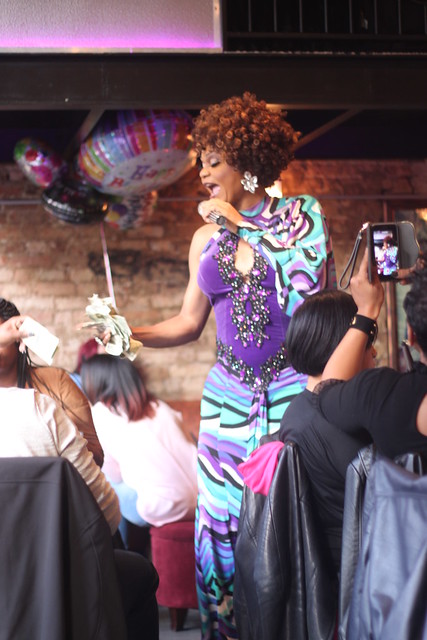 Be sure to reserve a table ahead of time—tables go for $20 for four people and sell out a week or two in advance. Watch Your Manor drag brunch is great for birthdays, and just having a good time with your friends. We met the Vino Vixens, a group of ladies who get together once a month for the past five years to catch up over wine. #SquadGoals.

The Bitches say: B. With raunchy humor, a hilarious M.C., and free flowing drinks, the Watch Your Manor Brunch is a great dance and drag party. It’s not for the faint of heart, but definitely a fun way to spend a Saturday. The food and service could be improved, but compared to many bottomless deals, it’s reasonably priced.