Willis Tower, Sears Tower, or whatever you call it… we may not be able to agree on a name, but I think we can all agree that pilgrimages to the tallest building in our skyline are usually reserved for out of town guests. This typically involves waiting in line for hours to stand in the Skydeck for mere seconds.

But what if you could enjoy the same views, no line, plus cocktails and delicious food?

Enter: The Metropolitan Club. This swanky club is members only and lives on the 67th and 68th floor of the Willis Tower. Thanks to our partners at Travelzoo, my boyfriend, Cam, and I were able to try out dinner at the Club’s exclusive restaurant, the Craftsman. The Metropolitan also has a restaurant that’s open to the public, called the East Room, which serves the same menu. 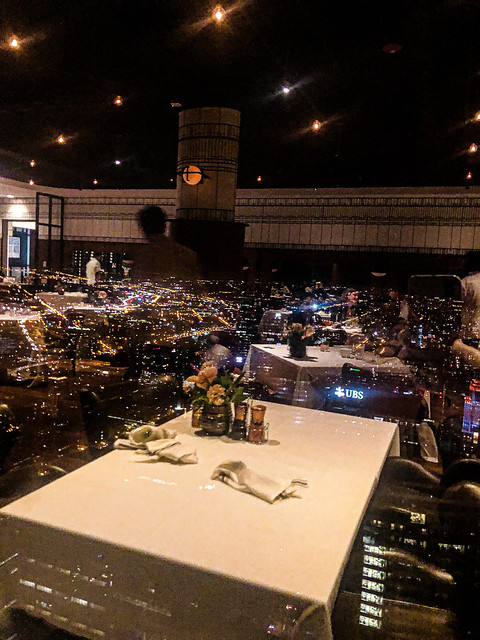 This was the perfect date night. Usually, Cam and I hit a local restaurant in Wrigleyville for our Saturday dinners. Instead, we got dressed up (the website suggested a jacket for men), and headed downtown for an exclusive peek at how the movers and shakers of Chicago dine. We were told to arrive 15 minutes before our reservation to go through security.

When we arrived for our 7 p.m. reservation, we were seated by a window facing the lake and able to enjoy the twinkling lights of the cityscape. 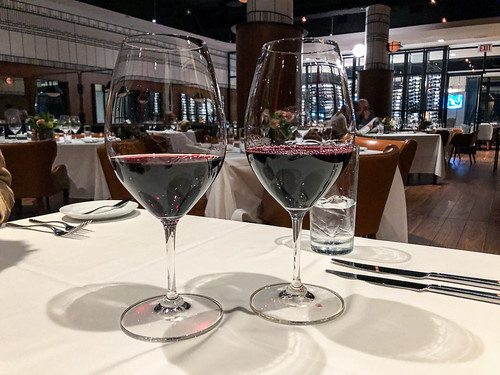 Though the voucher included a glass of bubbly, Cam and I both knew we were getting a steak, and we decided to get red wine (an extra cost, since it was not included in the voucher). As I swapped out my summer wardrobe for warm clothes, I have said goodbye to bubbly wine and embraced the deep, dry reds of winter. I had a fruity glass of pinot noir while Cam had a spice-forward Malbec. The knowledgeable staff is more than happy to help you find a glass to match your meal, preference, and wallet. 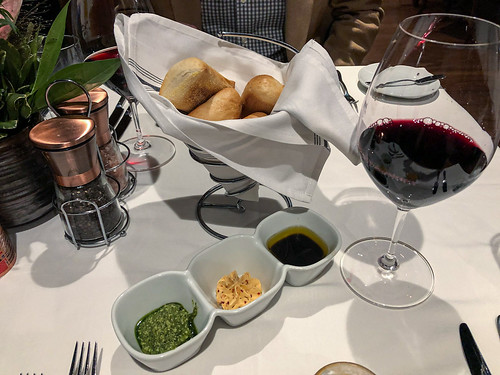 Pre-dinner bread can so often be an afterthought at restaurants. It’s something to nibble on while perusing the menu. But at The Metropolitan Club, the bread basket was a production. The bread came with pesto, sun-dried tomato butter, and a balsamic vinaigrette. The balsamic was tart and overpowered the plain rolls. I liked how fresh the pesto was, but our favorite was the sun-dried tomato, which was not overpowering but instead a savory, bright spread.

We were also both served an amuse-bouche, a small taste of the lobster bisque, which came in a small glass, almost like a shot glass, though it was something you want to savor instead of knocking back. It was warm with the salty taste of the sea. The lobster was slightly sweet and fresh. It definitely turned my interest toward the seafood options on the menu. 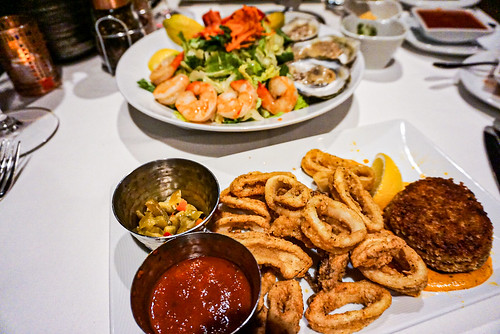 With the Travelzoo voucher, we both got an appetizer. Cam got the Chicago style calamari, which is fried calamari with Chicago-staple giardiniera tossed on top. The peppers added a nice acidity to the appetizer. It’s hard to go wrong with fried seafood, in my opinion, but we both liked the Chicago twist on this appetizer. 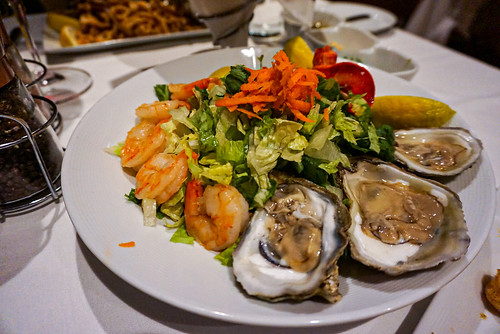 My eyes were much larger than my stomach and I went with the seafood platter. I will admit, it was too much when I had two more courses coming. But if you’re able to share with someone, this platter is amazing. You get lobster claw meat, four oysters, a crab cake, shrimp, and calamari. It’s a feast. I tried to persuade Cam to help out. The lobster claw meat was chilled nicely, but less flavorful than the bisque. The oysters had a nice brine, and I put some of my peppers on them for heat. My favorite was the shrimp boiled in Old Bay seasoning, with the crab cake coming in a close second. 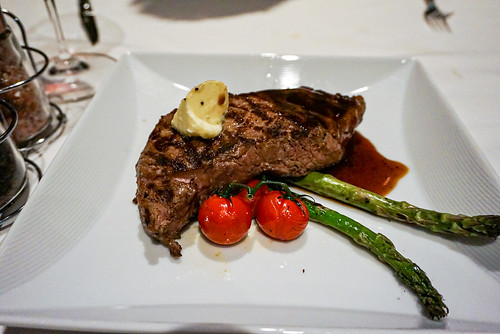 For our main course, Cam ordered a rare NY Strip steak with truffle butter. It was easy to stay under the $49 indicated on the voucher, as only one menu item was excluded. We were both pleased with the $59 price of the voucher though. Without the voucher, we each would have only gotten one entrée and a glass of water for the same price! Cam’s steak was 14 oz. and a juicy and tender cut of steak. It came with a scattering of blistered tomatoes and stalks of asparagus, but didn’t need sides to distract from the meat. The truffle butter was a stroke of genius, balancing the steak’s flavors by toning down the acidity and heightening the savory flavors. 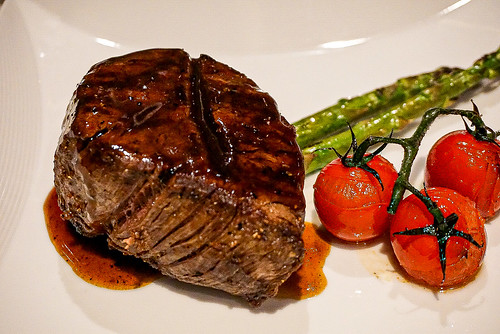 I opted for the smaller, 10 oz. filet mignon, also cooked rare. This center cut was melt-in-your-mouth tender with a grassy flavor and garlicky juices. Mine also came with some asparagus and tomatoes, but I was too full from the seafood platter and trying to save room for dessert. If you don’t spoil your appetite on an appetizer, do try one of the shareable sides, like the skin-on mashed potatoes. 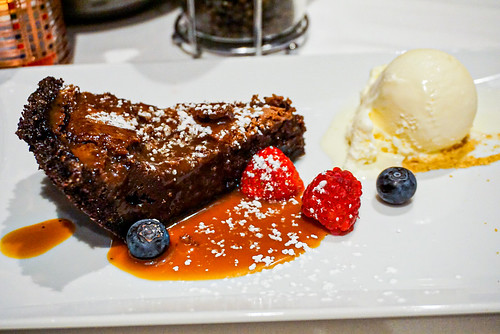 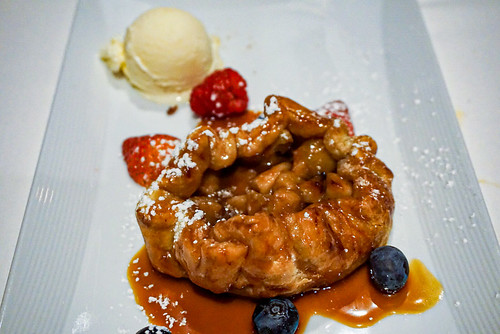 From the moment we looked up the restaurant, Cam had his eye on the Bertha Palmer’s brownie cake. Baked by James Beard nominee Baker Miller, this decadent, rich slice comes with a scoop of vanilla gelato to tame the chocolate flavors. He ordered this, and I went with the light and airy dutch baby, a “fluffy German pancake” with piping hot baked apples and a scoop of vanilla gelato. We split each of them, but agreed that the brownie cake was the winner of the two. It had a crisp top layer acting like a shell around the gooey center. If you enjoy chocolate, get a slice or two!

Elevate your date night or anniversary with a dinner at The Metropolitan Club. This swanky, romantic spot offers sweeping city views and satisfying dishes.

Travelzoo “epic eats” vouchers offers run through October 30. For $59, one diner will get one glass of bubbly (up to a $14 value), an amuse-bouche, a starter, one entrée (up to a $49 value), and any dessert. Also worth noting: The Metropolitan will add a 20% service charge based on the full retail price of the meal.

Travelzoo and Bitches Who Brunch are partners. All reviews and opinions expressed in this post are our own.