My three favorite new restaurants are all in Shaw, which is convenient as that’s where I spend the bulk of my time. The 2015 openings of Dabney, Convivial, and Kinship took the Shaw dining scene up a notch both in terms of caliber and luxury. I was expecting great restaurants—but all three spots are also fancy enough to warrant a change of attire from the Adidas and Lululemon I sport by day in the neighborhood.

I adore Cedric Maupillier, the chef and owner of Convivial and also Mintwood Place. But, because of travel and other commitments I had yet to make it in for his much-heralded brunch.

It was a rainy spring morning when I cozied up to brunch at Convivial with my dear friend, Emily. The restaurant was bustling for 11 a.m.— an early brunch hour for this not-so-early-bird. Poor Emily often waits several hours for me to wake up before we can brunch, so it was time to set brunch to a respectable hour.

We began with cocktails and coffee, as we always do. The cocktail menu is an enticing assortment of classic brunch cocktails: a Bloody Mary, mimosa, Kir Royale, Irish Coffee, and a Corpse Reviver.

Em is a Bloody Mary connoisseur and she said it was one of the best she’s ever had — concluding with “quote me on that.” It was a classic Bloody, served with vodka, tomato, horseradish, and pepper. I’d already discovered on date night that Convivial has a great cocktail program. 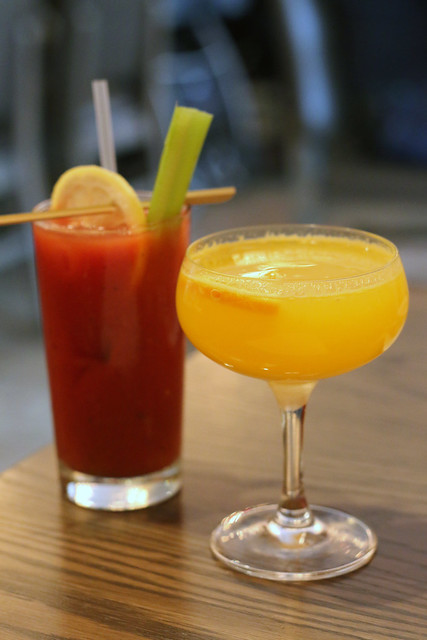 Similarly, my mimosa was also classic, but utterly delicious. Served in a champagne coupe, the mimosa has sparkling wine, Cointreau and fresh-squeezed, lightly pulpy orange juice. It was delightful — and much-needed after my delicious, wine-fueled dinner at Charlie Palmer Steak went late into the previous evening.

A note on the service. Our waiter, who used to be the bouncer at 2 Birds 1 Stone, was wonderful. He was a total professional and also good looking, which never hurts. The manager on staff was pretty snotty. If I was a lesser Bitch (or an actual bitch), I would have pulled the “I’m friends with the chef,” but instead Emily and I just rolled our eyes at her rudeness and kept our mouths shut. Perhaps she just woke up on the wrong side of the bed.

In other news, we’re launching a video series of our three favorite brunch bites! You can see our favorites from Convivial right here:

We began with the Leeks Dijonaise, as we both love leeks and try to order something with veggies in an effort to be somewhat healthy. The dish is one of my favorites at dinner — and it did not disappoint at brunch. 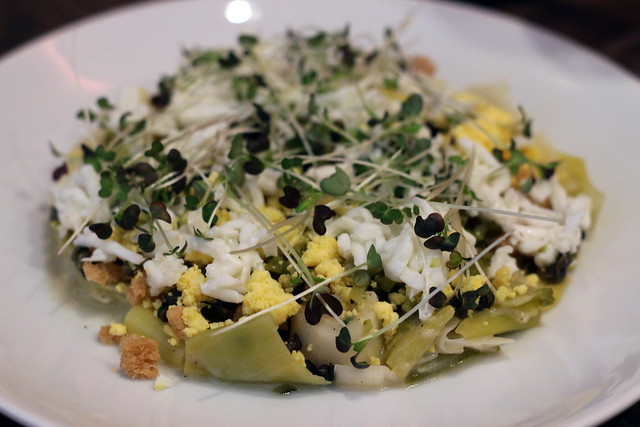 The menu at Convivial is hearty comfort food — it’s the exact sort of thing you’d want to eat on a cold, rainy day, the perfect precursor to a movie or a nap. Appetizers include a yogurt parfait with granola and dried fruit, a prune museli with almond milk and flaxseed, and some heartier options like a French onion soup gratinée or a confit turkey leg salad.

The brunch menu has a lot of sweet, bread, and dessert options — so if you’re gluten or sugar averse be warned. I’d seen images of the cinnamon roll on Instagram (what else would I look at on Instagram?), so I knew this was a must.

The enormous, classic cinnamon roll — served warm and slathered in just the perfect amount of sugar-y icing — lived up to its Instagram reputation. It was fluffy, incredibly moist, and oh-so-satisfying. 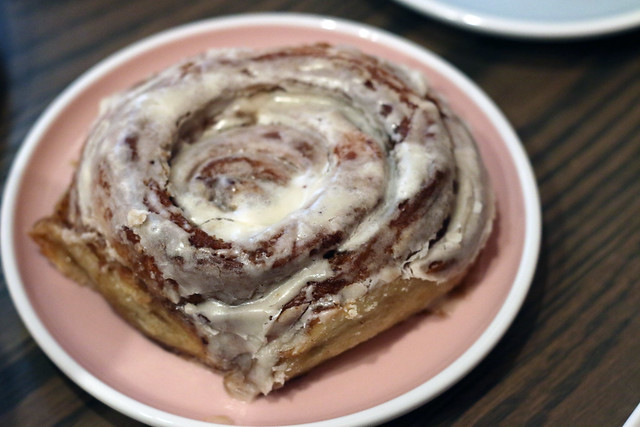 Emily likes omelets — which is fine by me as I tend to find them boring — but this one was anything but. The enormous omelet was served with Bayonne ham, a thick, cured meat that is comparable to a prosciutto, and thick slices of hearty country bread. It was dressed in piperade, a chunky red sauce of onions, peppers, and tomatoes originating from Basque country.

I knew we needed to try the two hearty Southern dishes: the shrimp n’ grits and the fried chicken and waffles. Naturally, I couldn’t decide between the two, so I ordered both. Both dishes were quite large and dense — like I said, this is definitely the type of meal that concludes with a nap. The shrimp and grits was served in a mini cast iron pot with a house-made biscuit on the side. The dish was thick, creamy and flavorful with ribbons of melted cheddar cheese and chunks of Tasso ham. There were several enormous shrimp and a perfectly poached egg that bled into the dish. The biscuit was incredibly moist and dense — not the kind that crumbles as it’s too dry. The baked goods at Convivial are impressive, which should be expected from a classic French chef. 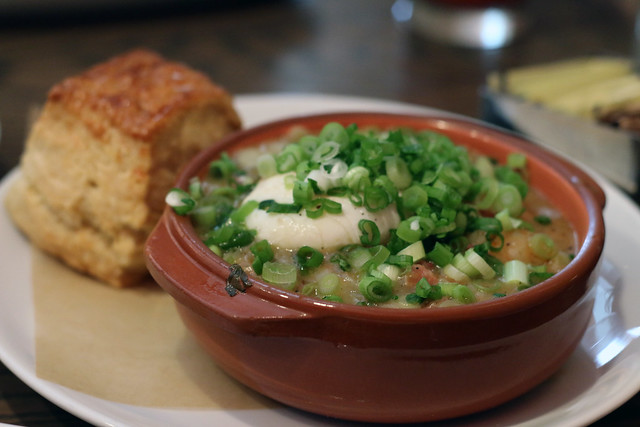 Though it’s difficult to pick favorites at Convivial, the waffle and fried chicken was a must-order—which makes sense given the fanfare around Chef Cedric’s fried chicken coq au vin. At the base was a moist, fluffy waffle, topped with enormous pieces of fried chicken and served with a boat of hearty sausage gravy. 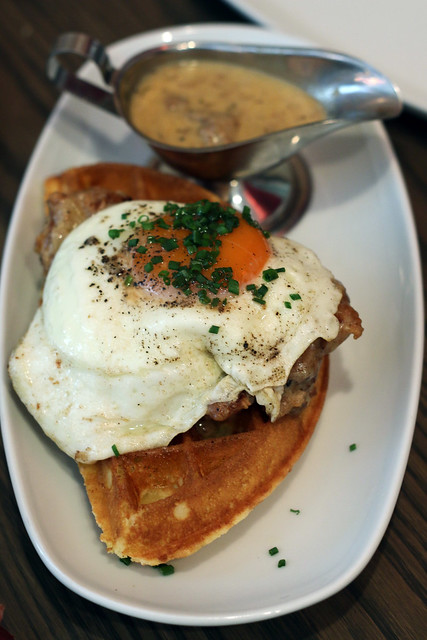 My one teeny tiny complaint is I would have liked a side of syrup — as I don’t love gravy. That said, the waffle and chicken were plenty moist and flavorful on their own.

The Bitches say: A. As we expected, Convivial’s takes on classic French and American brunch dishes were beautifully executed, with great service in a cozy and lively—dare we say convivial?—brunch setting.