It’s impossible for me not to adore Mark Bucher: the man who brought the Parisian concept of a restaurant dedicated solely to steak frites ( my favorite food) to Washington: Medium Rare, inspired by L’Entrecote. Medium Rare is among a handful of Washington restaurants I visit regularly, alongside Le Diplomate and B Too—I order the steak frites with a big, bold red at all three establishments.

After reviewing his brunch and engaging on Twitter for nearly six years, Mark and I have become friends, and I’ve found many more reasons why I adore Mark. Beyond steak frites, Bucher has built a brand around burgers: around his role founding BGR – The Burger Joint, and a cookbook, regular speaking engagements, and cooking show appearances around crafting the perfect patty. (Read our interview with him here.) 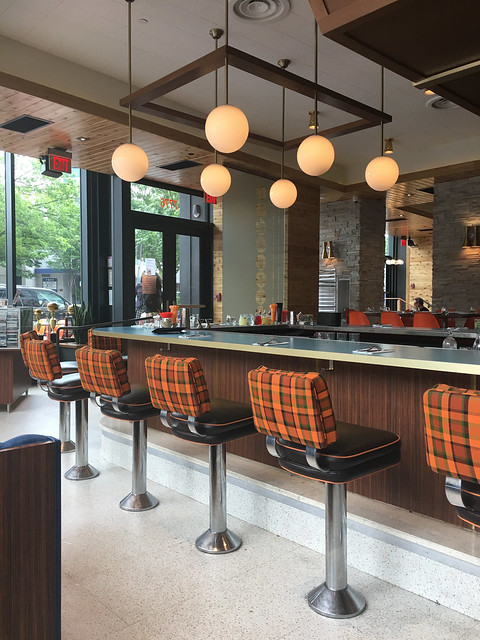 Beyond my respect for his carnivorous tendencies and a love for the food he cooks, I also adore Mark for his regular, authentic, and humorous use of Twitter—the middle-aged man with burger grease on his fingers still finds time to manage his personal social media accounts, as well as those for his restaurants. 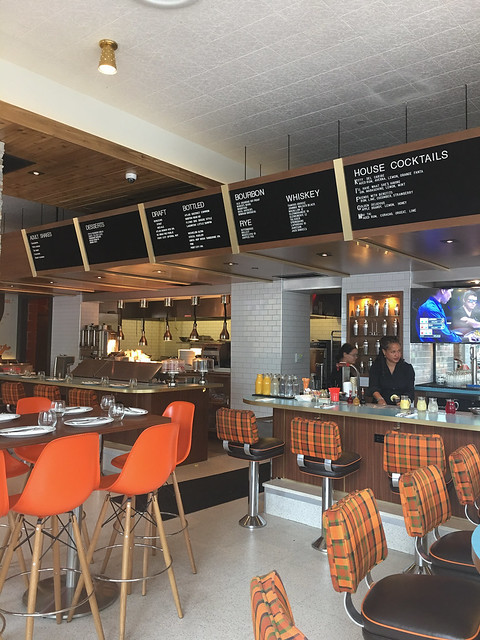 A guy’s guy, Bucher speaks fondly of his five daughters and his house full of women—even the yellow lab is a female. And, he’s been an outspoken critic of the new administration in the cheekiest of ways, creating a “Golden Showers” Trump Burger at his new Bethesda restaurant, Community, and in interviews with national publications like Marie Claire.

The Golden Showers burger drew quite a lot of internet fodder, as well as corresponding Yelp reviews from political junkies who have never visited the restaurant claiming of roaches and hair in the food. As many know, Yelp reviews can often make or break a restaurant.

It’s been six months since the opening of Community, a retro diner style restaurant with ’70s décor but a ’90s, Friends feel with a “come as you are and stay for the live music” environment. Appropriately, Community is all about boozy milkshakes and pancakes at all hours, fun—and, dare I say it, community. 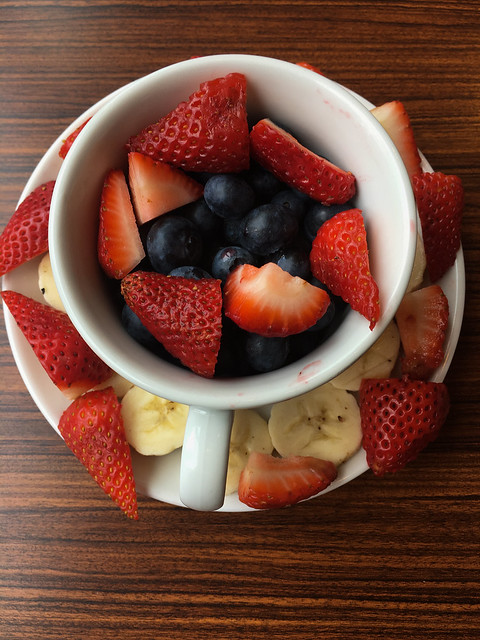 I rarely make it out to Bethesda, but I was due for a trip. It’d been six months, and I had loads of stories to tell Mark, who is supportive of my professional and personal pursuits in a father-like fashion.

Community is playful: the upscale diner is expansive (this is Bethesda) and perfectly decorated for a ’70s style diner. Retro light fixtures hang from the high ceiling, and orange-and-brown plaid stools line the large, diner-style bar. Above the bar, the cocktail menu is listed in playful, black-and-white on framed, retro menus. 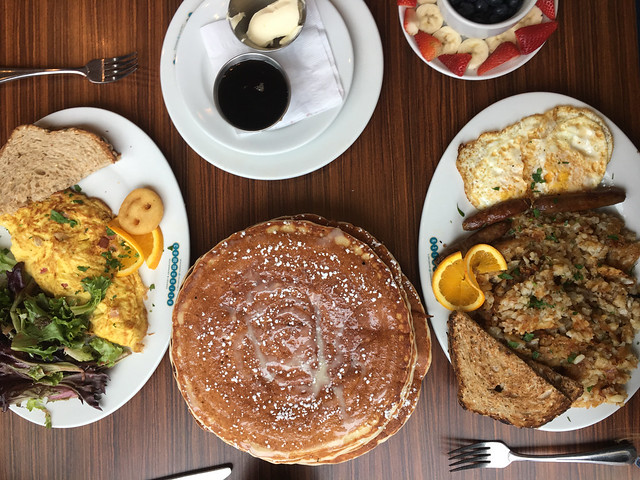 Around the bar there are high top, wooden table with mod orange stools, and low-lying, classic diner booths. The servers are mostly Bethesda teens and 20-somethings: exceedingly polite and most likely rather sheltered. The coffee—sourced from La Colombe—is hot and delicious. Like most diner patrons, we drink ours black. We both ordered breakfast from the menu of classic items—an omelet for Mark and scrambled eggs, with sausage today rather than bacon, for me. 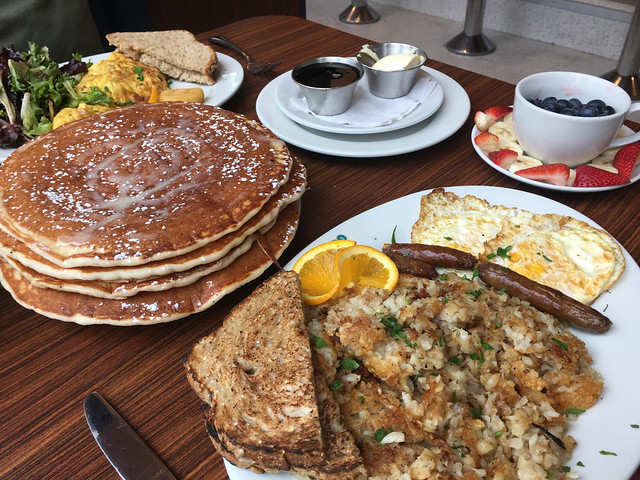 The platters are served with tater tot hash browns, packed with flavor and served in a generous portion. Each platter has a orange slice—a nod to the diner inspo—and a small hash brown cake that is shaped like a smiley face. I presume this is Mark’s cheeky doing, and though it is likely meant to amuse children, it also works on me. 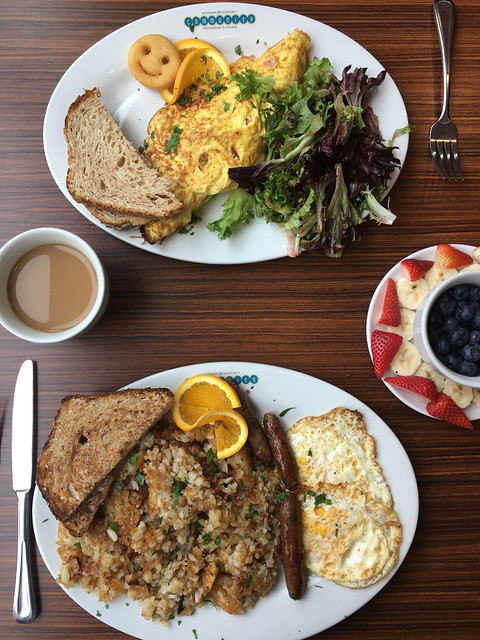 The hash browns were divine, and the sausage and eggs classic—which is exactly the sort of thing one needs in a breakfast.

Mark insists I order—or at least witness—the pancakes, a vision unto themselves. The enormous, thin and fluffy ‘cakes are far larger than any plate or human head. While one might be sufficient, they are served in a stack of five, which I’m convinced might be enough to feed a family of four. The pancakes are divine, topped with a circular drizzle of sugar glaze that’s not unlike what you’d have atop a cinnamon roll. They’re simple and perfectly executed—and definitely a must-order for any group or aspirational bruncher who visits Community. 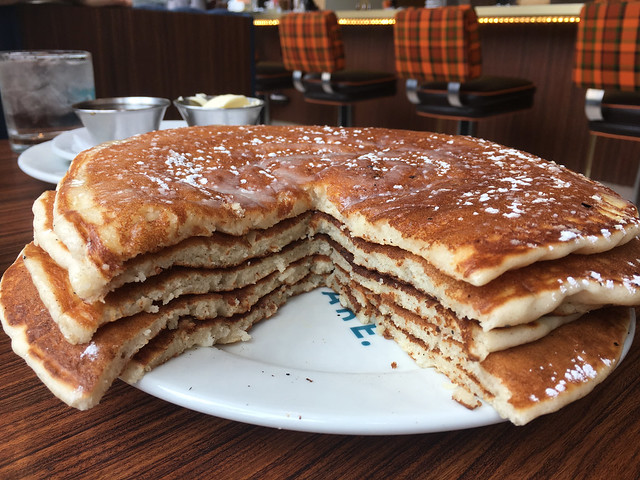 While I loved Community for the delicious, diner, classics the restaurant offers much more: an impressive cocktail menu and boozy milkshakes, as well as great lunch and dinner fare, and weekly live music on Wednesdays. I’ve already made plans to go back for brunch-for-dinner, paired with alcoholic ‘shakes and live tunes.

The Bitches say: A for an adorable, retro space serving up classic diner favorites and boozy milkshakes with a smile.