Cochon Volant is a bustling French brasserie in a part of town that usually isn’t so bustling on Sundays. The Loop – Chicago’s business district – is the city’s center Monday through Friday, but has a reputation for shutting down on the weekends. That’s beginning to change, thanks to restaurants like this foodie destination, which opened in 2015 led by chef Matt Ayala. 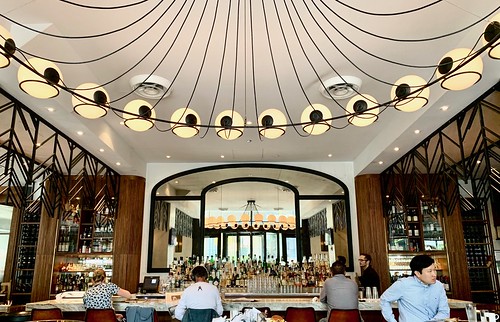 When the brasserie invited us in for brunch, we weren’t sure what to expect. On a dreary weekend punctuated with torrential downpours, it turned out to be the perfect place to keep pouring cocktails! The eatery feels casual and French, with tile floors and tiny tables. It’s attached to a Hyatt hotel, which may explain the elaborate breakfast menu, which they serve all week long. “Cochon Volant” means “flying pig,” so the restaurant is appropriately punctuated with imagery of winged hogs. 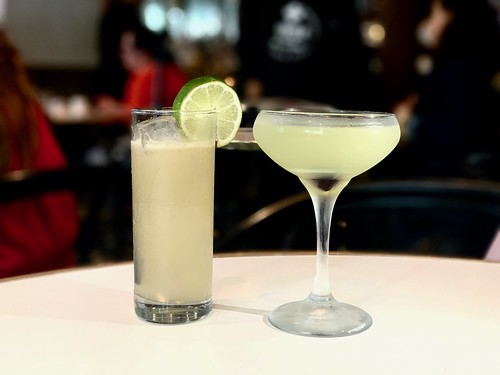 My friend Margy and I were a bit intimidated by the cocktail list at first. It didn’t seem very “brunch-y,” but our waiter steered us in the right direction with an El Chapo and a Last Word. We didn’t plan this, but the cocktails turned out to be adorably matching – both a light green color. The Last Word was made of gin, maraschino, green chartreuse, and lime. It tasted just like an aviation – but green! The El Chapo was a mezcal drink that tasted a lot like a Moscow Mule. It had strong flavors of ginger beer and listed “chocolate bitters” among its ingredients. We thought the chocolate might make it too sweet, but it was well balanced and made for a great brunch drink. 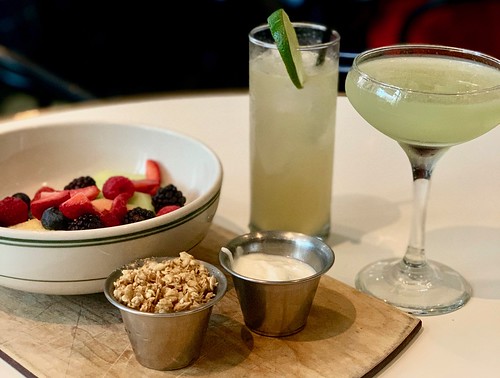 The waffles, pancakes, and Benedicts coming out of the kitchen were among the grandest presentations we’ve seen at a brunch! So naturally, we wanted to balance that out with something healthy. We opted for the seasonal fruit board with house granola and vanilla yogurt for our appetizer. This dish would be great for a weekday breakfast, but it was simpler than we were expecting – like something you would make for yourself at home. There was a medium sized bowl of fruit with a very small amount of granola and yogurt on that side. That’s okay though – we needed to save room for what was ahead! 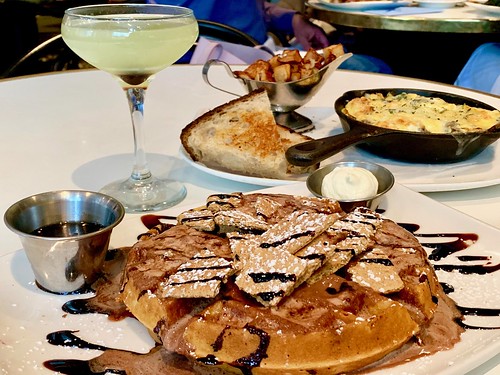 The menu is expansive. The highlights include entire sections of scratch-made waffles, big French pancakes, omelets, house Benedicts, and “unbreakfast” items for those craving lunch. The dishes at the tables around us looked so deliciously decadent that we simply had to indulge. I decided to order a scratch made waffle – “le chocolat” – with graham cracker, fresh Nutella, and whipped cream. It was unbelievable. The Nutella was so chocolate-y and the graham crackers and whipped butter added as much flavor as you could handle in every bite. It came with syrup, but I didn’t need any. You have to draw the line somewhere! The waffles were moist and got a little soggy toward the end, but with all the yummy things piled on top, I don’t know how that could have been avoided. Even the soggy parts were delightful. 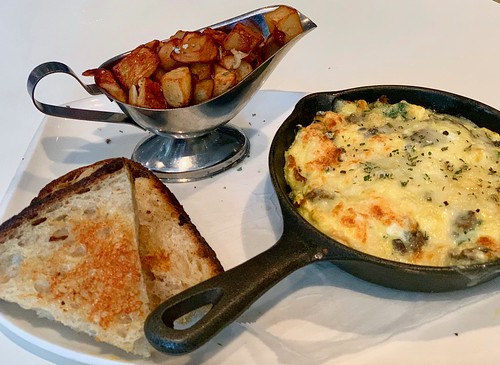 Margy was on the fence about her order, but she decided to try an omelet. We were worried that the omelet wouldn’t match the presentation of the other entrees, but lo and behold, it did. The omelet came in its own mini-skillet, which was both adorable and a game-changer for taste. The omelet had a crust on top, similar to what you might expect on a restaurant macaroni and cheese. It was seasoned perfectly and paired with buttery brioche and a gravy boat of potatoes.

This little French escape is just what the Loop’s brunch scene needed. Skip the healthy options and go right for the good stuff – we promise it’s worth the calories!