While we were guests of Clinton Hall for brunch, this review was written independently.

It had been a while since I had had a solid girl’s night out. As a result, I may have indulged in one too many cocktails and woke up the next day needing ALL of the water. While I would have loved to spend all day on the couch, binging my Netflix show-of-the-moment, brunch beckoned! 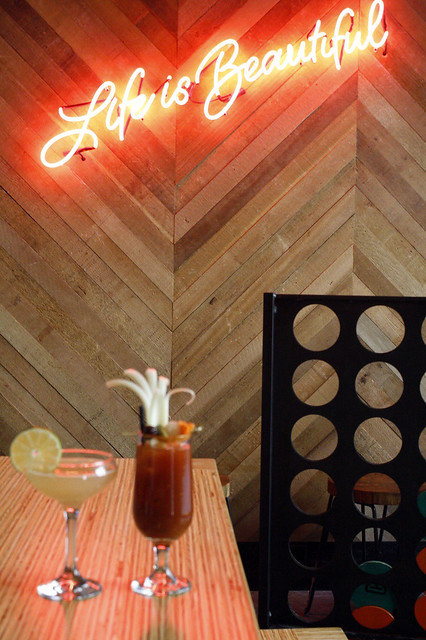 I was meeting a dear friend at Clinton Hall, a beer hall franchise quickly taking over the city with five locations as of this post. This particular outpost, Clinton Hall 51, is located on the East side inside the Pod 51 Hotel in Midtown East, taking over the spot where Chef April Bloomfield’s Salvation Burger used to reside. While I may be a Midtown resident, I don’t find myself in this area of the neighborhood very often, as it’s a bit out of the way and rather quiet on weekends. 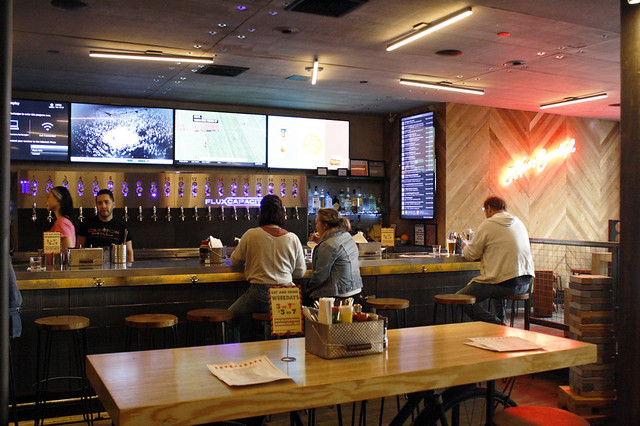 We were greeted with a large, but fairly empty restaurant–keeping in mind it was less than a month since Clinton 51 had opened its doors, and it isn’t a particularly busy neighborhood on a Sunday–and a rather eclectic brunch menu. But we appreciated the woodwork present throughout the space, and the fact Clinton Hall made an effort to bring their beer hall-feel indoors with the addition of a giant Connect Four, individual Jenga towers at each table, and their on-site Flux Capacitator, the most advanced beer technology on the market. 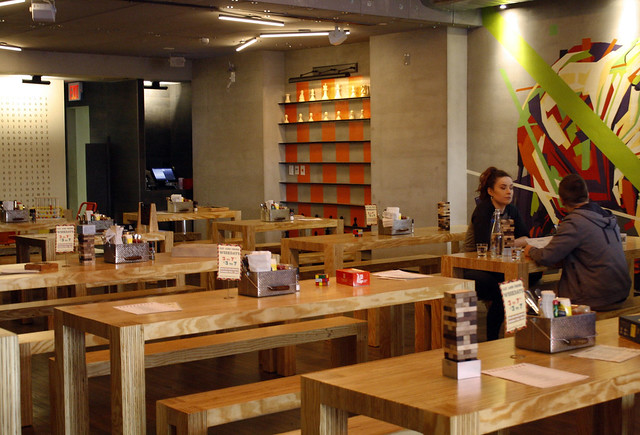 After we spent a few minutes perusing the menu and catching up, we opted to start with a few drinks. While Clinton Hall may be known for their vast craft beer selection, we were both more in a cocktail mood. Obviously, I decided to order their spin on a Bloody Mary, the Bloody Bull. This bevvie consisted of vodka, tomato juice, beef bouillon, Old Bay, and house-pickled vegetables. The Old Bay provided a nice amount of spice, while the beef bouillon gave the cocktail a unique depth. I’d definitely order this again. 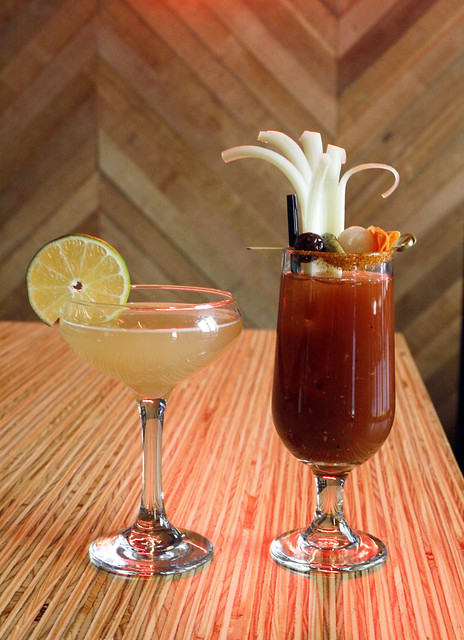 My friend went with the Cidralini: Dry sparkling apple cider, white peach purée, peach blossom, orange blossom water, and fresh lemon juice were all mixed together and served in a fancy coupe glass. I found it to be light and refreshing; the perfect cocktail for a spring or summer day. 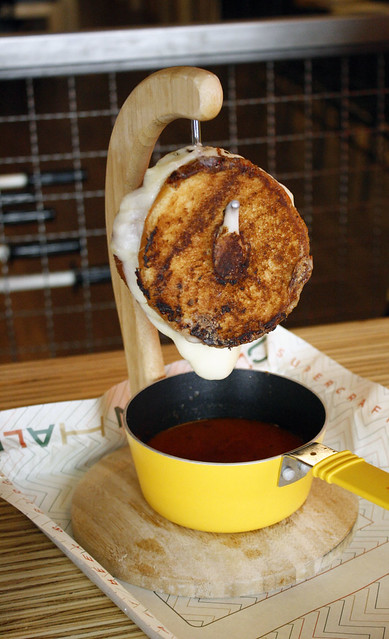 As for our entrees, we knew we had to place an order for the Doughnut Grilled Cheese. I’ve seen this all over Instagram (as I’m sure you have too), and it was finally time to try this concoction for myself. It’s worth noting this is served in limited quantities, so if you know you want to try it, it may be worth ordering as soon as you’re seated. 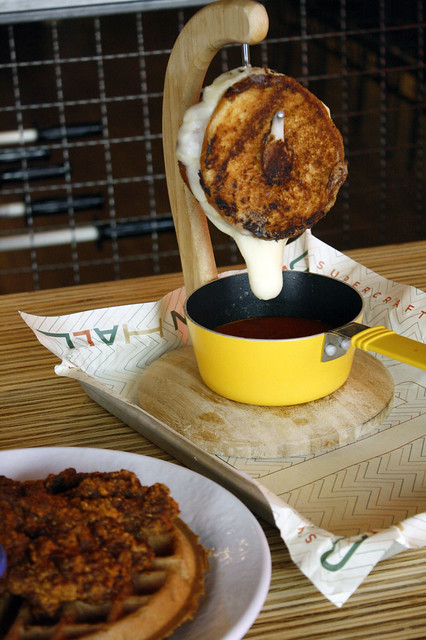 This dish is worth ordering for the presentation (and eventual Instagram post) alone. A fresh, grilled glazed doughnut, oozing with mozzarella cheese, is served on a hook, directly over a piping hot bowl of tomato soup. It was definitely eye catching and mouth watering, but the taste didn’t blow me away. It was essentially a slightly sweet grilled cheese with your run-of-the-mill tomato soup. 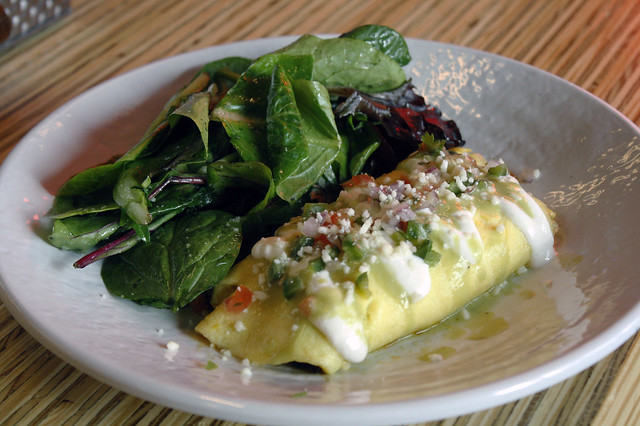 We also shared the Hen of the Woods Omelet and the Nashville Chicken & Waffles. The omelet was my personal favorite, made up of farm fresh eggs, hen of the woods mushrooms, salsa verde, cotija cheese, with a mixed greens salad on the side. It was on the lighter side, yet still filling and incredibly flavorful–particularly if you’re a mushroom-lover, like me! 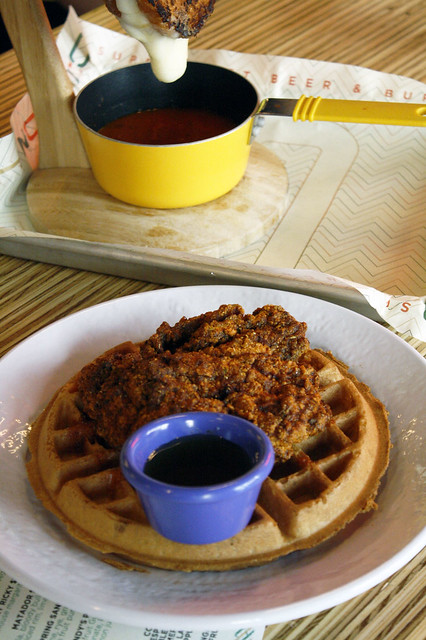 My girlfriend preferred the Nashville Chicken & Waffles, dubbing it her favorite dish of the meal. The hot-fry chicken breasts were served on top of malt-vanilla waffles, and drizzled with clover honey. I found the waffles to be a tad overcooked and dry, but the dish still had a nice flavor overall, with a delayed kick from the rub used on the chicken. 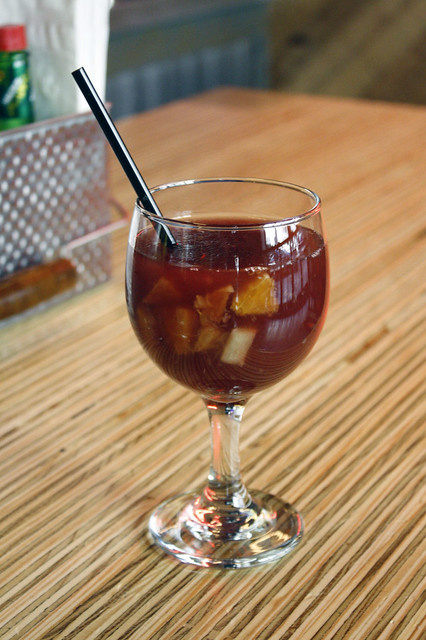 We rounded out our brunch with a second round of cocktails, both opting for the Spring Sangria. This port wine, rye, grapefruit liqueur, passion fruit puree, and lemon juice cocktail left us feeling ready to take on the rest of the day–if not a tad tipsy.

The Bitches say: B-. While the omelet and cocktails were great, the rest of the meal and the atmosphere were somewhat underwhelming. But we’ll definitely check out their new Williamsburg location, which boasts a large outdoor space, perfect for those warm summer days.