Just like the next NYC Bitch, we keep up with our local foodie pubs, like Eater and Infatuation, and keep our very own brunch must-visit lists. Clancey had recently been added to Eater NY’s “12 Brunch Restaurants to try Right Now,” thus earning a spot on my list—which is, embarrassingly enough, about as long as one of those CVS receipts… 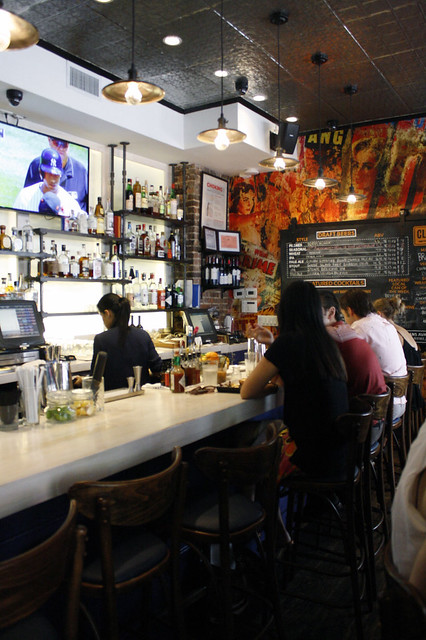 So I was delighted when Clancey reached out and invited us to come in for brunch on a recent Sunday. We were running behind schedule, thanks to the always-“reliable” F train, and jogged through the 90-degree heat down Delancey Street. 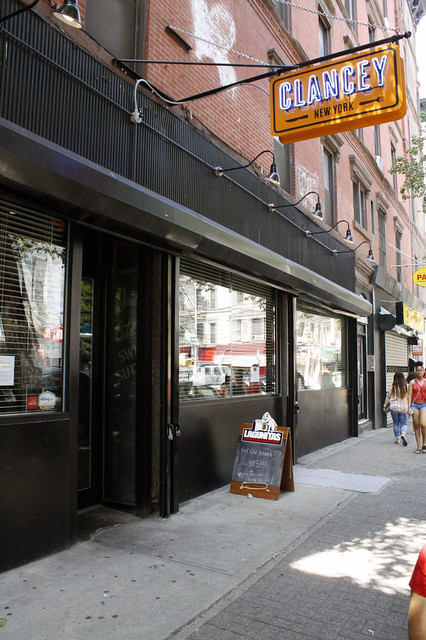 The place was PACKED—and tiny—and I nervously wondered if they had given our table away. Thankfully, they hadn’t, and we were briskly seated. Unfortunately, the AC in Clancey wasn’t quite as brisk. We noticed most of the staff was visibly sweating and a number of patrons fanning themselves with their menus. The hot temps were likely due to the open kitchen and the fact that Clancey is such a small space, which we understand can’t really be controlled, but it did make it difficult for us to get comfortable on such a hot day. 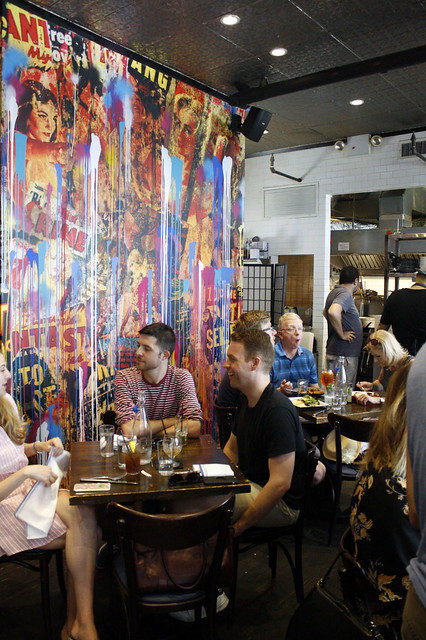 To cool off and quench our thirst, we quickly placed our cocktail order. Fields tried the Louisville Lemonade: Old Forester bourbon was mixed with mint and fresh lemonade. It was reminiscent of a mint julep but a bit lighter and more refreshing, thanks to the hint of lemonade.

I was intrigued by Clancey’s unique Bloody Mary offerings, one of which was dubbed their “About to be Famous” Bloody Mary. Ancho Reyes Verde liqueur, vodka, and green juices were mixed together and served in a tulip glass. 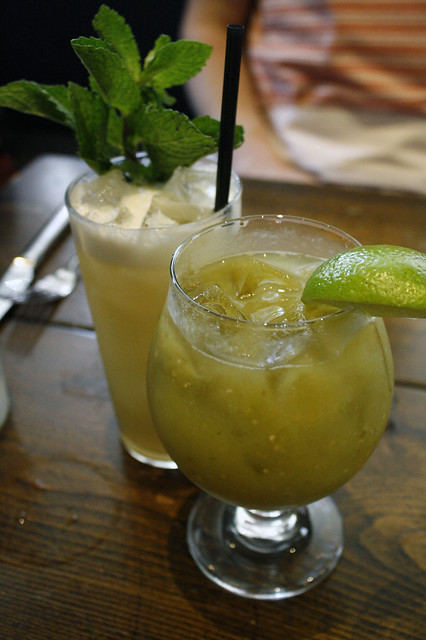 The spice was much milder than I anticipated, but I also prefer my bloodys to have quite the kick. The flavor wasn’t quite what I was expecting either, as the green juices were potent and ended up overpowering the salsa verde. But if you like green juice, then you’d love this cocktail! 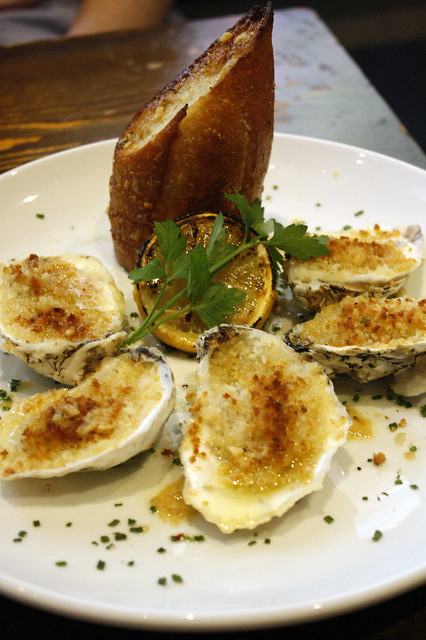 Clancey’s food offerings are rather eccentric, with a unique spin on your typical comfort foods. The restaurant has one of those menus where everything catches your eye and you know you’ll be making multiple return visits to try each item once. After struggling with our options for a few minutes, we opted to start with the chargrilled oysters. 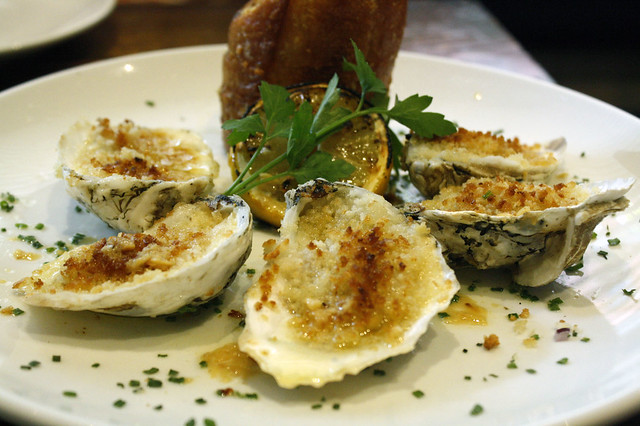 The oysters were topped with a heaping amount of garlic butter, pecorino cheese, and toasted bread (because “dipping is fun,” as the menu noted). This dish was decadent and full of flavor, and the oysters were perfectly grilled. I easily could have eaten the whole thing myself, and we ended up cleaning the plate.

We were eyeing the Yesterday Lo Mein as our second starter, but ended up trying the Something Wrapped in Bacon instead. The “something” that’s wrapped in bacon changes daily, and on this particular Sunday they were offering two varieties: fried chicken and grilled artichokes. 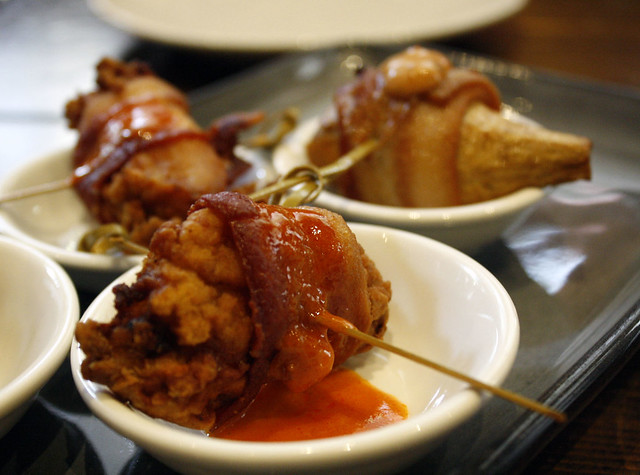 Of course, we had to try both, if only for the sake of journalism! The chicken was fried just right and topped with a dollop of homemade hot sauce, and the artichokes were topped with a chipotle aioli. We ultimately preferred the artichokes to the fried chicken, but hey, you can’t go wrong with anything wrapped in bacon. 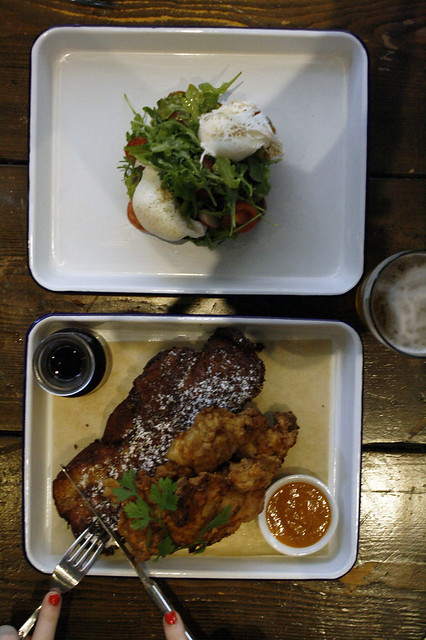 For our mains, we ordered from totally opposite ends of the brunch spectrum. The beau was surprisingly feeling something on the lighter side and ordered the avocado toast. I decided to try the chicken and challah, Clancey’s spin on your classic chicken and waffles. Our neighboring table had also ordered this, and it looked amazing, so that also played into my decision. 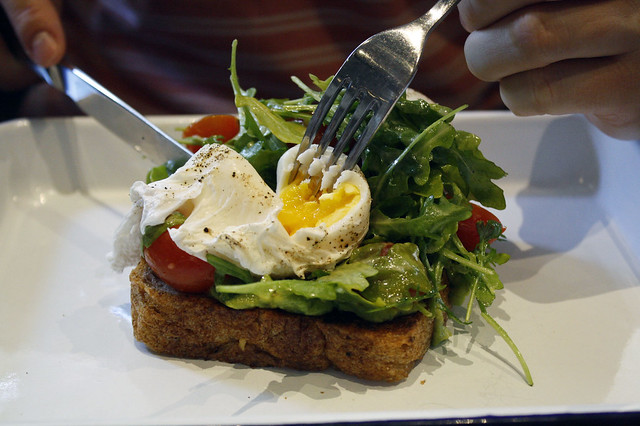 The avocado toast arrived on its tray and looked absolutely gorgeous. Served with poached eggs, sliced radishes, lemon juice, and fresh herbs, this was definitely a solid avo toast. However, the eggs were more on the soft-boiled side than they were poached.

Due to the thickness of the bread, we wished the chef had been a bit more heavy-handed with the avocado-to-toast ratio, but the flavors were so on point that they made up for the thin layer of avocado.

Our jaws dropped when the chicken and challah arrived—the portion was absolutely HUGE. The chicken was heavily fried and served over challah French toast, with house hot sauce and warm maple syrup on the side. 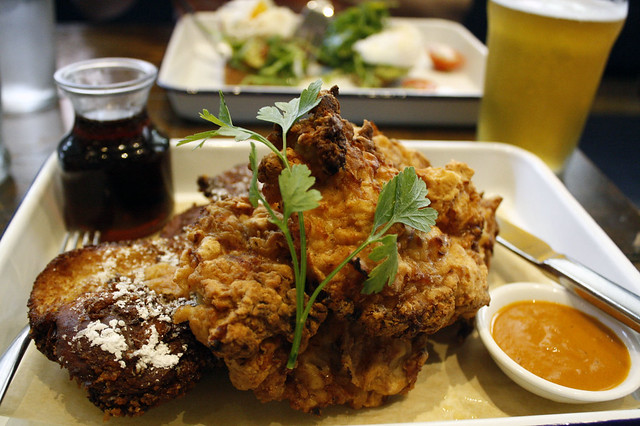 I had high hopes for this dish, as it looked absolutely delicious, but it was sadly lacking in flavor. The thick batter used on the chicken seemed to be under-seasoned, which resulted in super crispy, but not very flavorful, chicken. A healthy heaping of hot sauce and a few drizzles of maple syrup helped, and the challah French toast was a great complement to the crispy chicken.

Fields was able to snag a craft brew mid-meal, and I had hoped to round out our brunch with a bacon Bloody Mary, but our server was suddenly nowhere to be found. After 15+ minutes passed, I gave up, and we asked for the check. 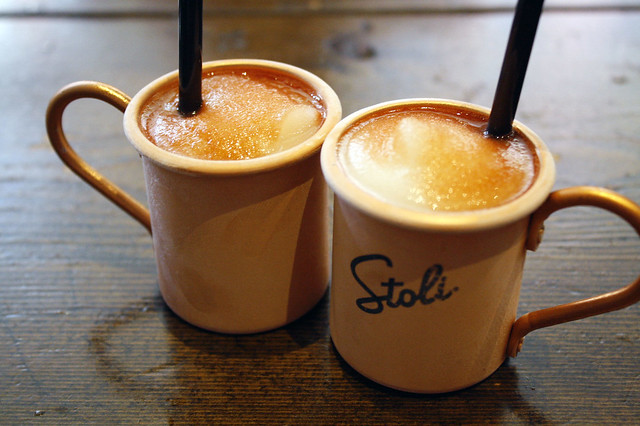 Our server ended up bringing over mini frozen Moscow Mules as a thank you (which they were offering other patrons, as well). Vodka, ginger, mint, and lemon were blended together and topped with an Angostura bitters floater. This more than made up for the Bloody I wanted to order and was such a refreshing treat on a hot summer day. We would definitely return for an oversized version of these cocktails.

The Bitches say: B. While a few things lacked in flavor and the service could have been more attentive, all in all, Clancey offers a solid brunch experience in the heart of lower Manhattan.

Clancey serves brunch on Saturday and Sunday beginning at 10 a.m.