St. Patrick’s Day is a day to remember in Chicago. The Irish spirit is loud, debaucherous, and enthusiastic in Chicago, some may say more so than any other city in the U.S.

With everyone dressed in green, drinking green beer, and surrounding the green Chicago river, the downtown area can be chaotic. I enjoyed my first St. Patrick’s Day in Chicago and put myself in the middle of the chaos. Now, I distance myself from it as much as possible! This year, I decided to spend it at house parties and of course, with a mellow brunch. 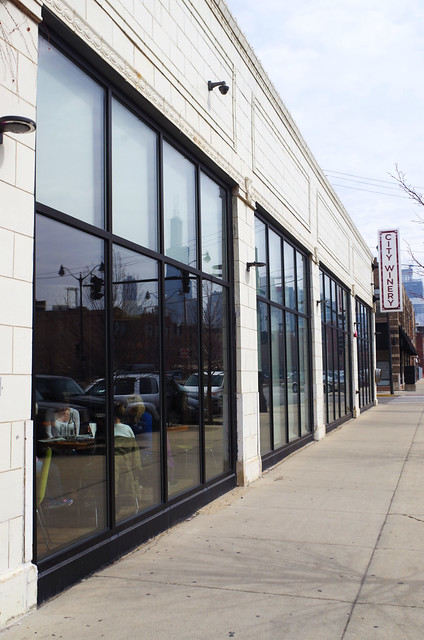 My friend Britt decided she was also up for a low-key, yet classy brunch in a quiet, West Loop spot: City Winery. I had been there once for drinks and apps with Alexis and Amber when we were making our selections for our Best & Worst and Best Bites 2015 and I was excited for the brunch. 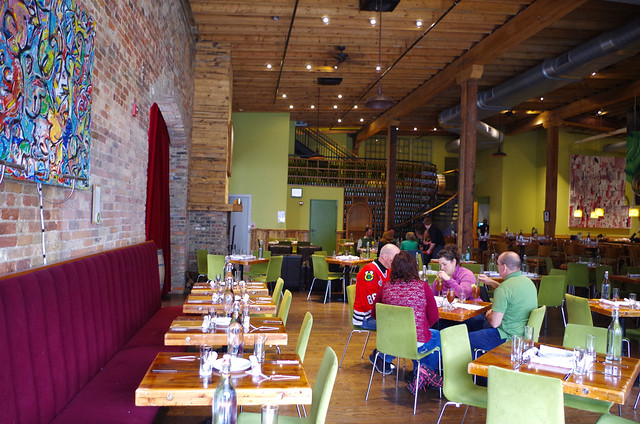 As you walk into the City Winery, you are met with a large foyer with flagstone floors, and a high, lofted ceiling. The entire space has a rustic, open, artisan feel to it. The host led me to a table in the main dining room, which is an enormous space with modern furniture, exposed brick walls, and lots of natural light.

I noticed that this was going to be an especially mellow brunch, as I was one of three parties in the entire restaurant by 11:30 a.m. Everyone was celebrating closer to downtown, so I was even more excited by the prospects of a good brunch without having to wait—but I was very, very wrong. 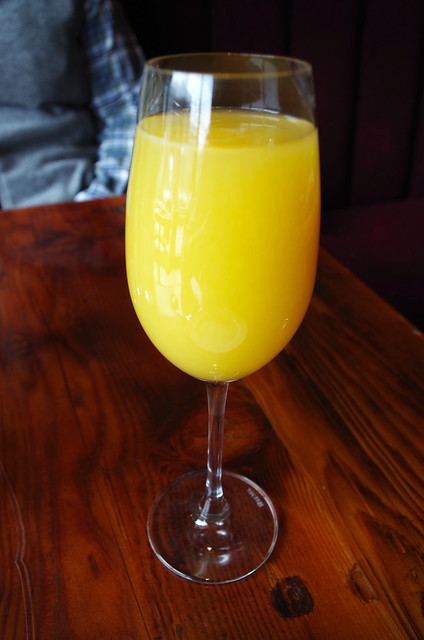 Britt and I were excited about the day and wanted to start off strong with some tasty cocktails. When our waiter made his way to our table, we asked him for his recommendations and if there were any green-themed specials for the holiday.

Well, OK then. Perhaps he was having a tough day, or was wishing he was celebrating with everyone else, but it was a logical, and fair question considering there were many establishments offering specials to commemorate the day.

To start, I ordered a classic mimosa and Britt went for the Bloody Mary. Even while the restaurant was slow, we waited at least 25 minutes for our drinks—this was mildly frustrating.

Despite the long wait, my mimosa was a wonderful ratio of champagne to orange juice. I liked it enough to order a second one—after all, it was a day to celebrate St. Patrick, or at least that’s how I rationalized it. 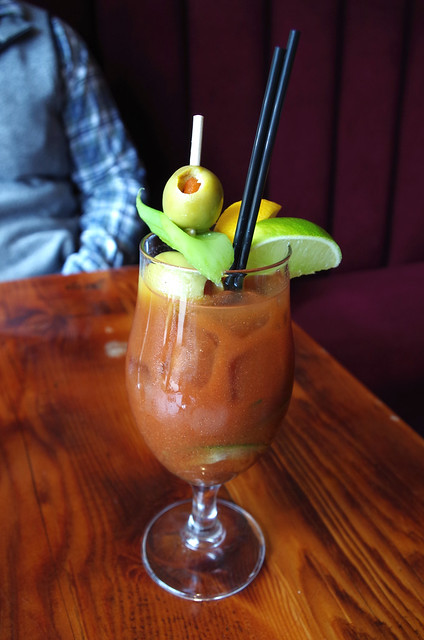 Britt liked her Bloody Mary but it certainly was spicy! It was a good mix of tomato and vodka, but it was not the grandest of presentations nor was it something Britt ordered again. Instead, for her second cocktail, she went with the mimosa and enjoyed that much more.

Because of how long it took for our drinks to arrive, we snagged our waiter and placed our entree orders to help get our food out ASAP. Well, I guess 45 minutes is as fast as they could manage—I was so disappointed.

When we received our entrees, we ordered our second round of drinks and miraculously, they arrived before we finished our meals. 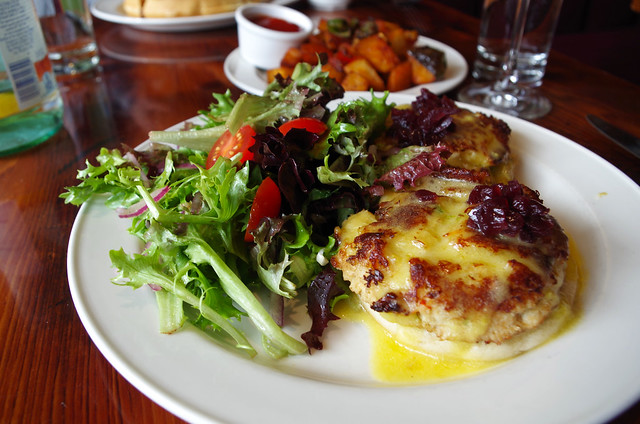 When it came to entrees, I had a bit of a hard time picking but ended up going with the crab cakes—hoping the dish would bring back memories from my Virginia/Maryland upbringing. 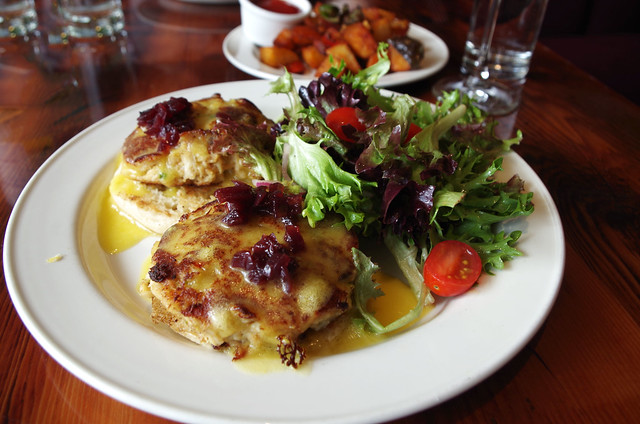 The crab cakes were mushy and while they were well seasoned, the bread on the bottom was so soggy, it made the dish undesirable. The side salad was delicious, and I ate all of that; I couldn’t stomach the crab cakes any longer. 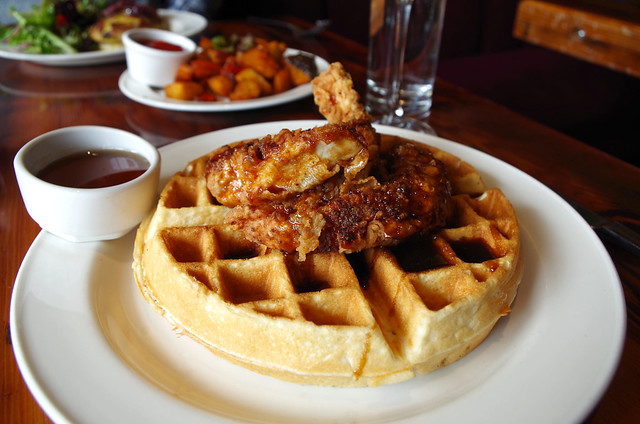 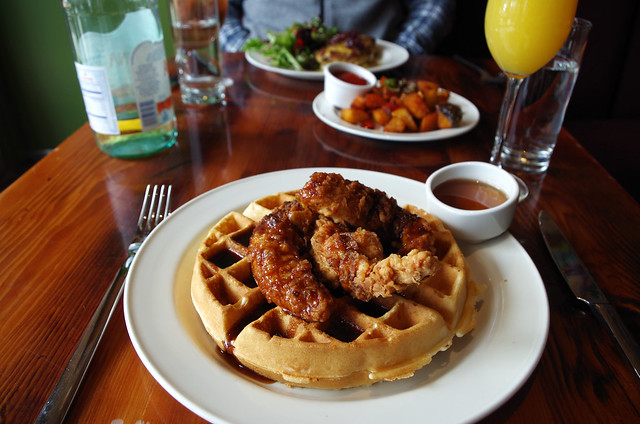 City Winery is located in the West Loop, a mecca for inventive restaurants with delicious food. For us, City Winery is a pass when it comes to the brunch. For drinks, perhaps make the trek down Randolph Street to City Winery, but I will not be going back here anytime soon.

The Bitches say: D+. I feel like I would have been more lenient toward City Winery if they had been slammed, or had good food, but the service was terrible (and grumpy) and the food was below sub-par.