The former STK space got a major makeover; that huge space that used to be a dark steakhouse and club has magically been lightened and brightened. With a huge wrap-around rectangular bar, wood features, iron accents, and a cozy fireplace, the space is almost unrecognizable.

The restaurant was mostly empty on the day we were invited in to try brunch, but I suspect that will change soon. I was sure to note the cozy backroom available for private events. 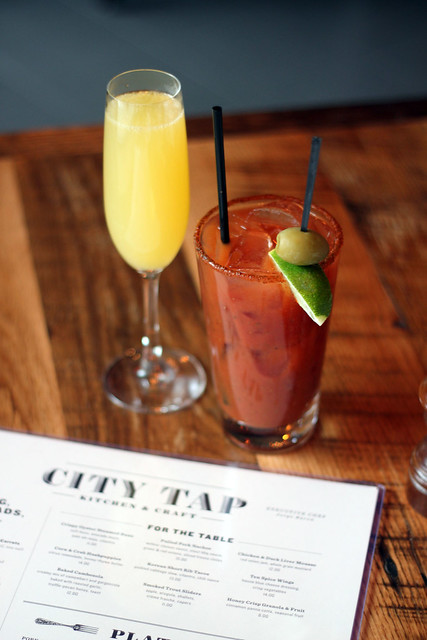 I had only ever been to the Penn Quarter location for beers before, so I had no real expectations for this visit. The staff was incredibly welcoming and eager to show off the new brunch menu created by executive chef Jorge Baron.

My brunch date and I were overwhelmed by the size and scope of the menu. There looked to be lots of appetizing options, but no real cohesion to the cuisine. It could best be described as elevated bar food; heavy on savory entrees that you’d typically find on a lunch menu.

At brunch however, City Tap House has a great bottomless beverage deal. For $18 you can choose between bottomless Bloody Marys, mimosas, and beermosas. If you opt for Bloodys, there is a make-your-own bar area where you can choose between a wide variety of mixes and add accoutrements. If you’re not super confident about your own mixology skills, the bartender is happy to do it for you. We opted for the latter option, and found the Bloody to be a classic.

The mimosas had the right ratio of OJ to bubbles and went down far too easily. Our server was quick to refill and happy to accomodate our requests both for coffee and to switch to a beermosa later in the meal.

I knew I wanted to try the baked cambozola. This creamy mix of camembert and gorgonzola was heavenly, baked with roasted garlic (my personal aphrodisiac) and topped with truffle-pecan honey. I would have smothered this cheese dip over basically anything, but this toast was perfectly adequate. 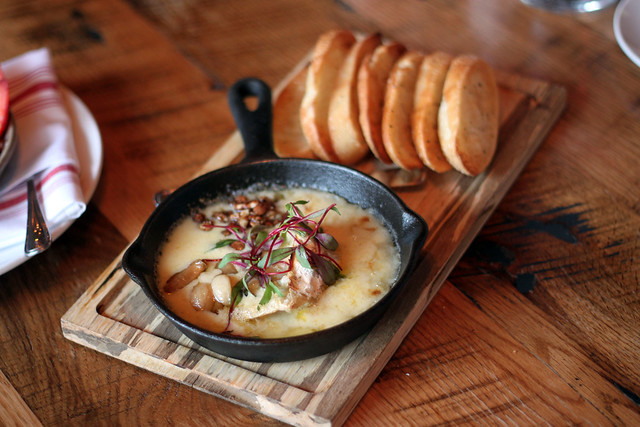 Looking for something sweet, we also ordered the honey crisp granola and seasonal fruit. I was intrigued by the use of cinnamon panna cotta instead of yogurt. Unfortunately, the panna cotta was much too sweet. It overpowered the entire dish and rendered it tough to manage more than a few bites. 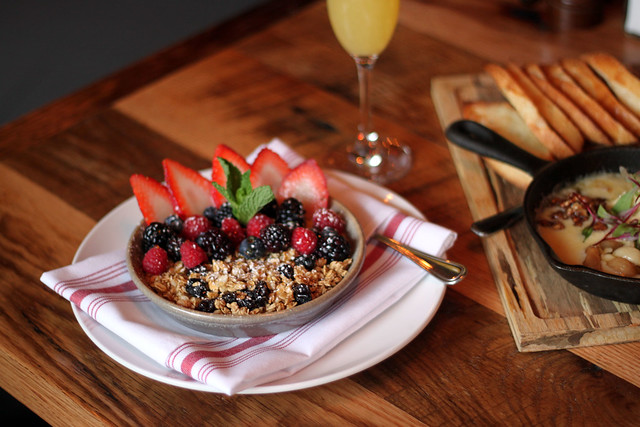 I can never say no when I see chicken and waffles on the menu, so I was set to judge this against the many I’ve tried across the city. I was pleased with the huge portion of both waffle and chicken.  Both were moist and perfectly fried.  The dish came with maple syrup, red pepper jam, and honey-thyme butter. The jam was an unexpected addition which I appreciated. 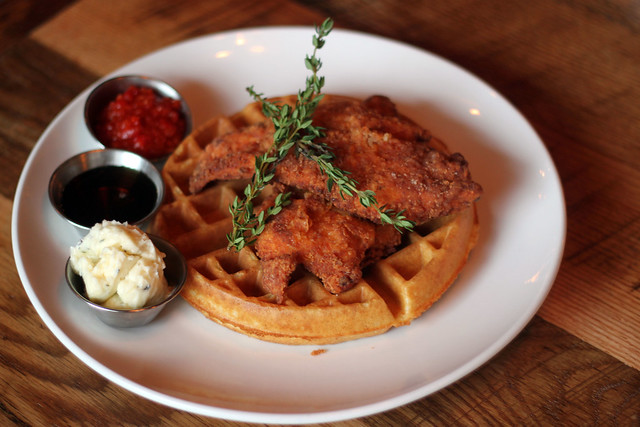 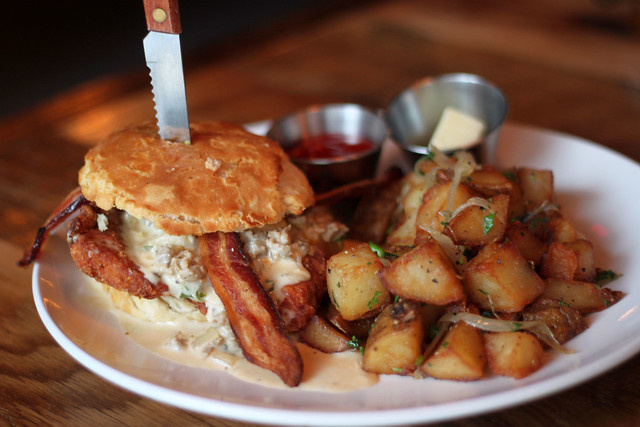 This sandwich was massive and messy. It is served with a steak knife to anchor it, which is necessary because you simply cannot eat this with your hands. The sausage gravy was runny and delicious, and the biscuit was light and fluffy, without becoming too soggy from gravy.  The breakfast potatoes on the side were perfectly cooked. The entire dish was super filling; we’d definitely recommend this to sop up a hangover. 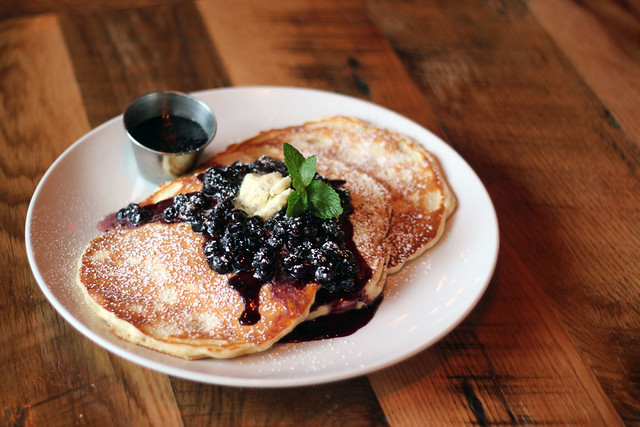 For dessert we split the blueberry pancakes. Topped with honey thyme butter, blueberry star anise compote, and Pennsylvania maple syrup. These were really solid pancakes. Were they the best I’ve ever had? No. Our waiter had really talked them up and they were good, but not amazing. Still, it was a sweet finish to our massive meal.

City Tap House is a great brunch spot for big groups. With plenty of space and flatscreen TVs peppered around the restaurant, it’s great for watching a game over brunch. We were definitely eyeing hangover pizza for a future game day meal.