Don’t get me wrong, I love my family, but after a month of holiday celebrations and non-stop bonding, we were excited for a Saturday field trip with one of our favorite couples, Mike and Kendra. 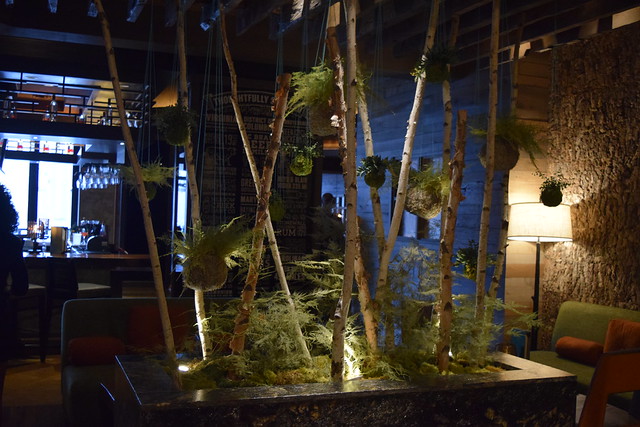 Despite waking up to a blizzard (for D.C. standards), we bundled and laced up, trekked to our car, and went on our way to Bethesda for brunch and a movie, courtesy of City Perch and iPic. We didn’t know what to expect from a restaurant connected to a movie theater in the ‘burbs, but we agreed we couldn’t have picked a better day to post up, carbo-load, and lounge.

City Perch was adorable, with an unexpected organic entryway full of birch trees and moss. The juxtaposition to the boutique hotel feel of the iPic movie theater effortlessly flowed together and somehow didn’t seem disjointed.

After braving the snow and a 40-minute drive, we were ready for some cocktails. We started with a regular mimosa, a peach mimosa, and a Bloody Mary. Kendra liked her peach mimosa served with crushed ice, prosecco, and elderflower, but admitted it was different than she expected. My mimosa was bubbly and light on the OJ. The Bloody Mary was made to order with either gin or tequila—Mike chose the latter—and very salty and flavorful. It hit the spot. 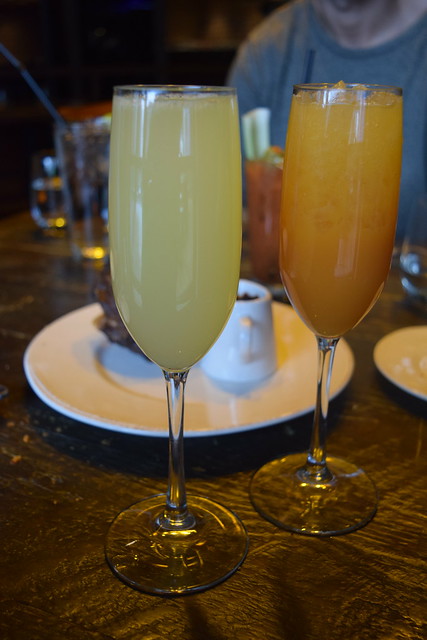 The bread basket set the bar for all other bread baskets this year. Seeing as it was merely January 7th, I realize it may be too early to make such claims, but between the rosemary, cheddar, and caramelized sugar biscuits, the moist cornbread topped with toasted corn kernels and honey butter, and the flaky chocolate croissants that were reminiscent of babka, we were in gluten heaven. 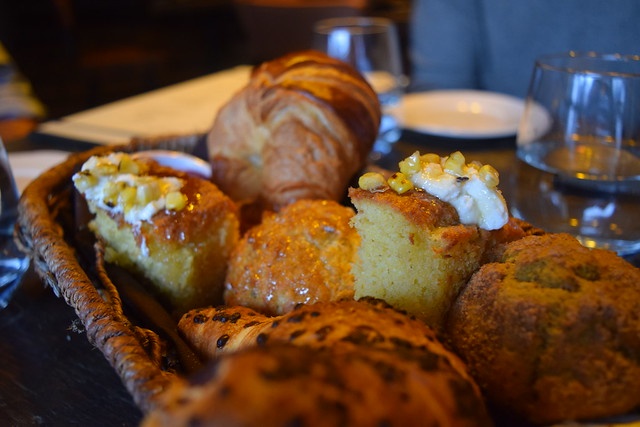 Following our strong start, our server twisted our arm and convinced us to try the monkey bread babka. The dish was a large circular, dense pastry, like an over-sized cinnamon roll, making it difficult to share. We ended up pulling it apart and dipped each piece in the hazelnut chocolate sauce. The monkey bread flavor trio of coffee, cocoa, and cinnamon was decadent and filling. 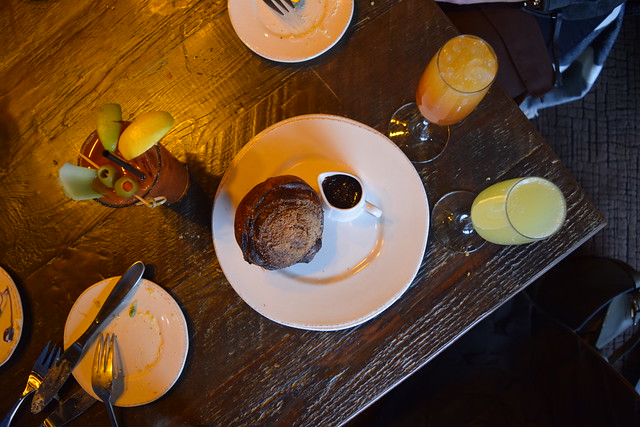 We wanted to try the crispy latke fries, because we had never heard of such a thing, but the kitchen was all out. So, we opted for the smoked salmon stuffed popovers. They were no latke fries, but they were still in the Yiddish family—salty, flaky, and the right amount of fresh lox made them a nice contrast to the otherwise sweet start to our brunch. 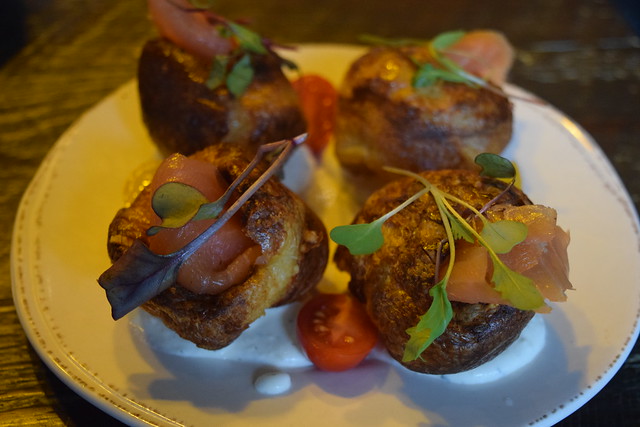 In between catching up on a month of life events, we quickly made our entree decisions. Kendra went with the slow poached egg and short rib, served in a skillet with mascarpone polenta and bacon braised kale. That mascarpone polenta was heavenly and served as the most creamy foundation for the egg and short rib. The kale actually looked more like caramelized onions; it was salty and provided a nice contrast in texture to the rest of the dish. The poached egg was cooked perfectly. 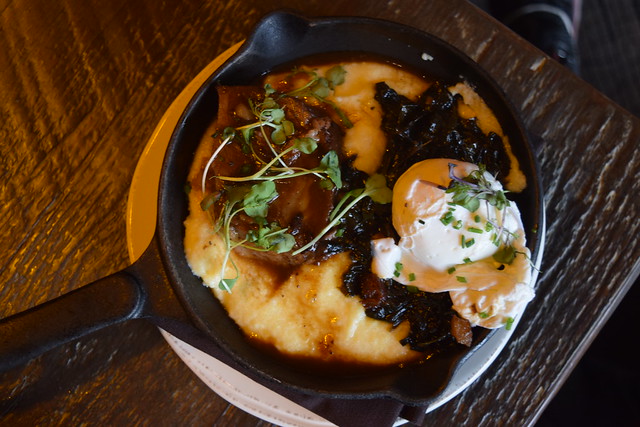 The chicken and waffles was calling my name. The pieces of chicken were served boneless and crispy, and the unique presentation made the dish not as intimidating as some traditional versions. I appreciated that it arrived with a side of delicious bacon syrup, so I could douse my chicken and waffles in syrup to my liking. 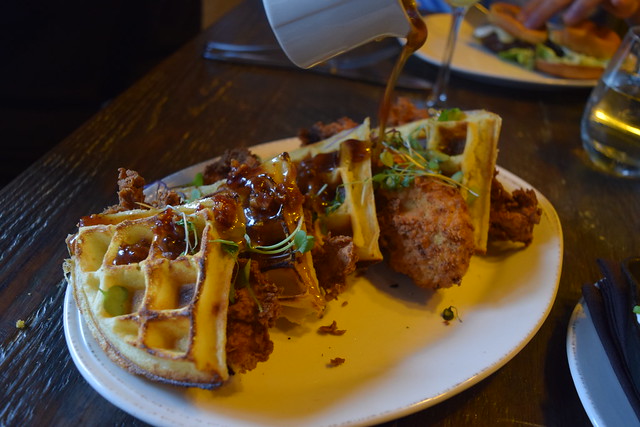 Mike and Gavin both stuck to more tried-and-true brunch items. Mike ordered the steak and eggs, which he felt was a hearty, standard choice. It was plenty of food and the filet was cooked well—a perfect comfort dish for the snow day. 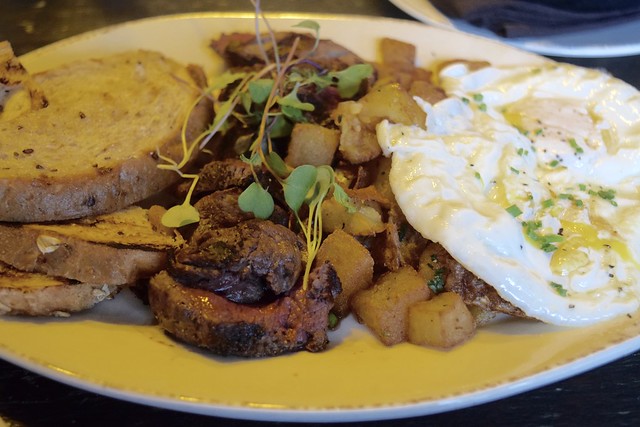 Speaking of comfort food, Gavin opted for the brunch burger, which came on a brioche bun with candied bacon, sharp cheddar, and a fried egg. The lightness of the brioche bun was a great bookend for the hearty toppings. He loved the combination of the candied bacon and savory cheddar. I noticed his burger was also cooked perfectly, so I snagged more than one bite. 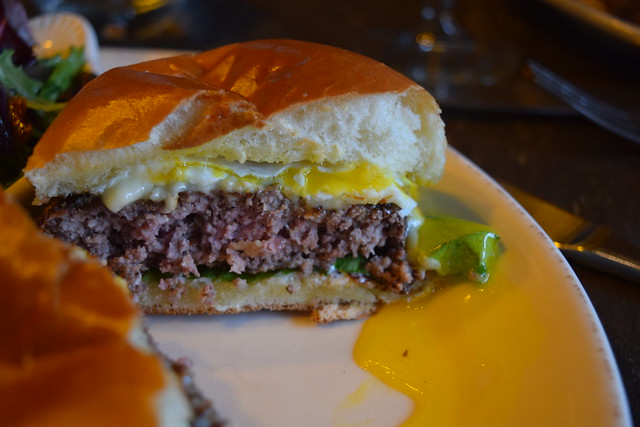 We were nearing comatose, but our gracious server insisted we try the deep dark chocolate chocolate doughnut. It arrived in a tower of pistachio ice cream, dark chocolate sauce, and pistachio tuille. To be honest, this dish looked better than it tasted, but then again we may have hit our capacity for sweets that morning. The doughnut was somewhat flavorless, as was the pistachio ice cream—damn you, Sicily, you’ve set too high a bar for my pistachio palate! 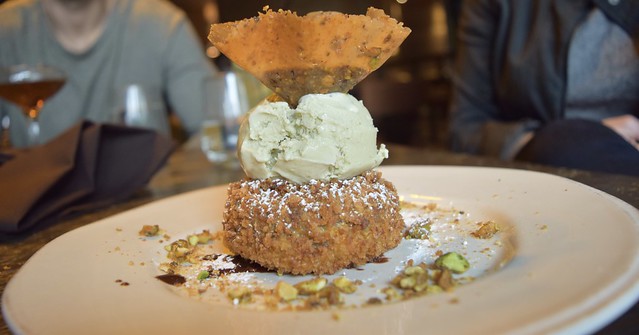 In an effort to catch at least one Golden Globe nominated picture, we grabbed our cocktails—with each gentleman brandishing a Manhattan—and shuffled a whopping 25 feet to the theater. We were greeted by massive leather lounge chairs, blankets, and a small side table with a blue button to summon our server at any point. As if we didn’t have enough to eat, we grabbed a bag of popcorn, just in time to sit back and watch the 3 p.m. showing of the highly anticipated La La Land. After several rounds of drinks and endless carbs, we were quickly headed for la la land ourselves. 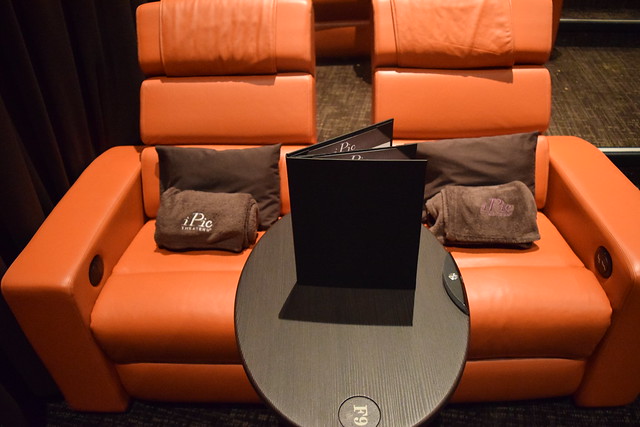 The Bitches say: B+. We were excited for a day in the ‘burbs, but City Perch and iPic far exceeded our expectations. The seasonal American menu, quality service, and luxurious ambiance at iPic movie is going to make it tough to frequent any other theater in D.C.