Frontier is bringing the Big Easy to West Town. This local favorite made a name for itself with whole animal roasts like alligator, antelope, and wild boar. And on Saint game days, this New Orleans-inspired restaurant basically becomes Chicago Mardi Gras, complete with a brass band. My boyfriend Cam and I were invited to check out the brunch menu. 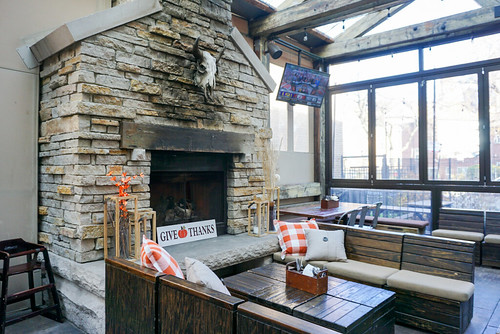 The interior is trendy, Oregan trail chic, with fireplaces, animal skulls, and lots of wood beams. The first level has an atrium and dining room but there is also a second story, private room, perfect for large brunch parties. We went on a Saturday and sat in the atrium, with the roof contracted due to the weather. There was college football on, but the speakers had pop music so it did not feel overly like a sports bar brunch. 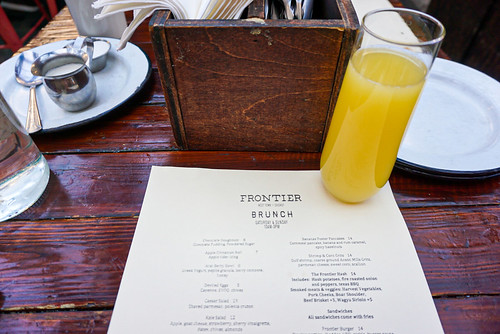 To start with, Cam ordered a cup of coffee, and I got a mimosa. Frontier makes a nice mimosa, with enough bubbly to make you feel like you got your money’s worth. The glass is small, but the mix has enough alcohol you don’t feel like it is a rip-off. If I was with a group, I’d definitely explore Frontier’s large format, craft cocktails– but as I was the only one drinking, that was too much of a commitment. 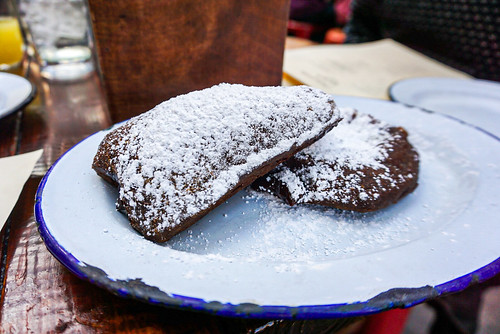 Up first, we started with the chocolate doughnuts, which were more like beignets than traditional doughnuts. The pastries were filled with pudding and topped with powdered sugar. Unfortunately, this dish fell a little flat for both of us. The cakey exterior was dry and overcooked, and while the pudding interior helped, I ultimately wished we had split a different starter. 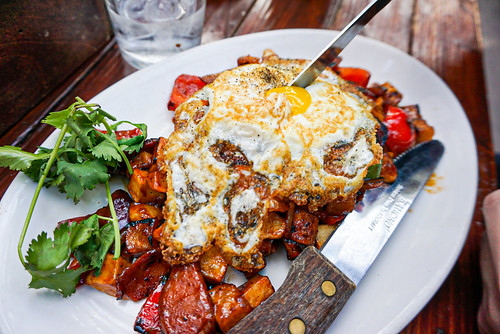 Cam ordered the harvest hash with pork cheek. We’d seen several other diners get the hash and it both looked and smelled amazing. The steaming plate came with cubed potatoes, fire-roasted onion and peppers, a fried egg and succulent cuts of pork. It was savory and restoring. If there’s any chance you’re hungover at brunch (no judgment), this is what you want to order. It will immediately revive you. 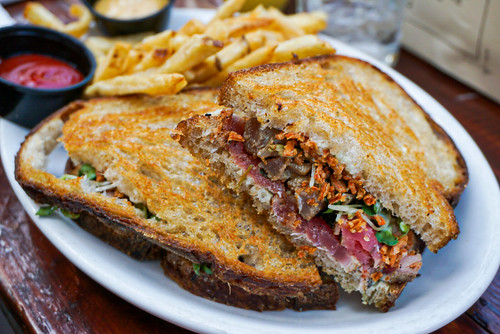 At the recommendation of our server, I went with the Ahi tuna sandwich. It was served on crispy brioche with tuna, fried spicy shallots, sprouts, and wasabi ginger mayo, with a hearty serving of fries. It tasted like a poke bowl and toast had a love child, and it was amazing. Not too spicy, light, and savory, this sandwich is the perfect brunch entree if you don’t want to feel stuffed after eating. The fries were also spectacular, tasting slightly of sage and as if they’d been cooked with sausage.

Looking for a lively, fun brunch spot for your crew? Frontier will deliver with strong drinks, tasty food, and plenty of room for everyone.

Frontier serves brunch Saturday and Sunday from 10 a.m. to 3 p.m.