I knew it was already going to be a great weekend because my mom, Lenore, was coming into town to do what we love best: shop, eat, and watch Netflix. What more could you want? I had been dying to try Cheesetique’s brunch seeing as that it is a cheese boutique–because really, is there a better concept?  We were invited to brunch on the house by Thomas, the lovely manager. 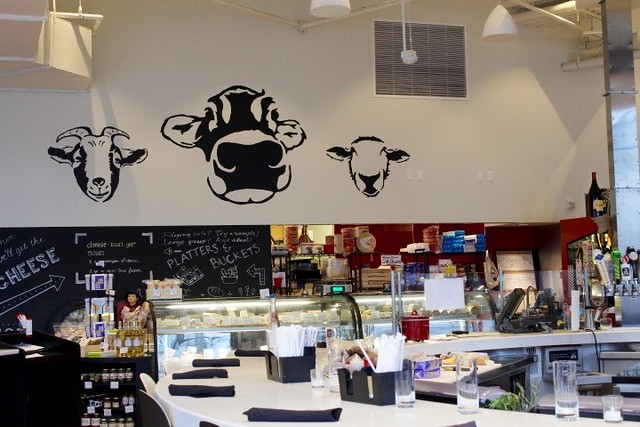 Cheesetique Ballston is only seven months old, but the owner is not new to the cheese world. There are already two other Cheesetique locations in Del Ray and Shirlington. The Ballston location is quite different from the other restaurants in its design and layout. This spot is open, bright, and modern, while the other two locales are cozy and intimate. They feel like more traditional wine bars; but all three locations have a cheese shop with extensive cheese paraphernalia attached to the restaurants. One of my favorite things about Cheesetique is that after you dine in, you can take home any of the cheeses you tried for 10 percent off. It’s a total win-win. 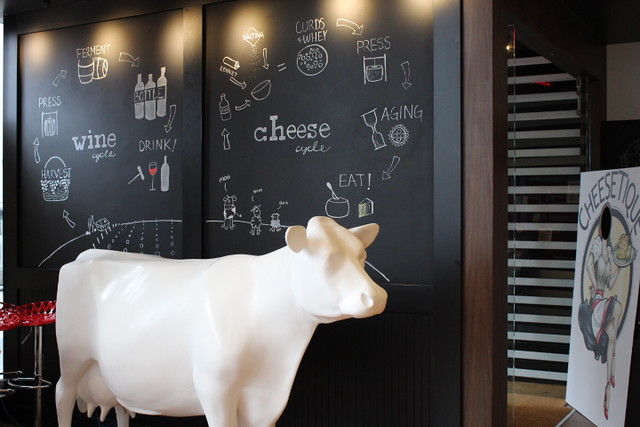 My brunch companion and I were immediately seated in a cozy red booth. Our lovely waiter greeted us shortly after and offered us beverage suggestions. I knew that we couldn’t do bottomless as we had a busy day of shopping ahead of us, which is serious work. Our waiter suggested the wild hibiscus cocktail for me and Lenore surprised everyone with a Bloody Mary order. Mama needs a cocktail! Right? I was afraid that my drink might be too sweet or syrupy, but I couldn’t have been more wrong. 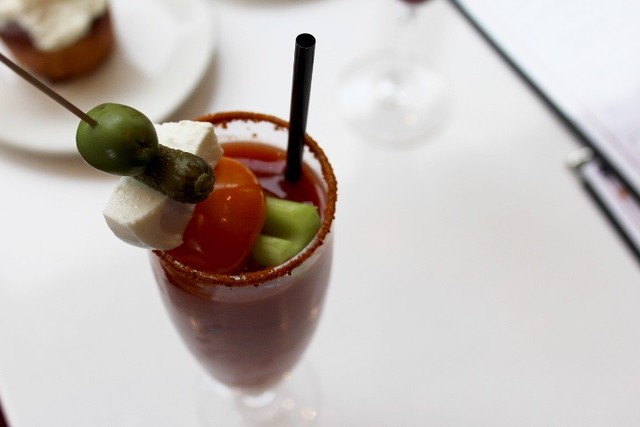 This Prosecco drink was light and refreshing, without being too sugary. It came with an edible hibiscus flower that the waiter insisted I try. I was skeptical at first, but it was actually delicious. Lenore’s Bloody was equally amazing. It wasn’t too spicy–don’t you hate it when you feel like you’re drinking a shrimp cocktail?  We loved how this Bloody was ice cold, perfectly mixed, garnished in Old Bay, and topped with none other than fresh mozzarella. It was also served in a champagne flute, which was charming. I refuse to drink any other Bloody Marys without a cheese garnish from here on out. 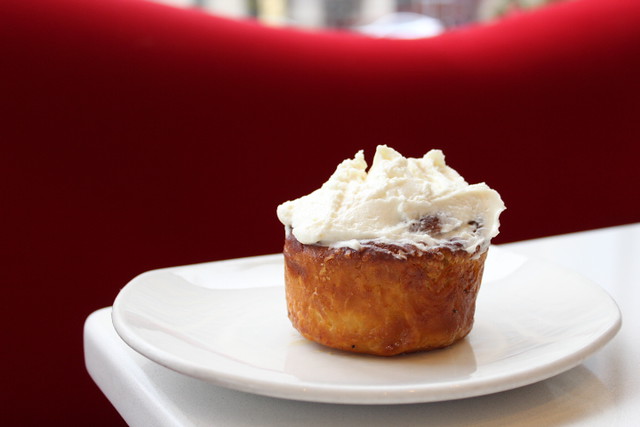 I couldn’t hold out for dessert to try the cinnamon roll so we ordered one as an appetizer. This particular cinnamon roll was topped with goat cheese frosting. Think of the best cream cheese frosting you’ve ever had and multiply that by a million. We loved everything about this sticky bun–it was crunchy and gooey with the perfect ratio of bread to scrumptious frosting. This will definitely be a contender for Best Cinnamon Roll in 2017. 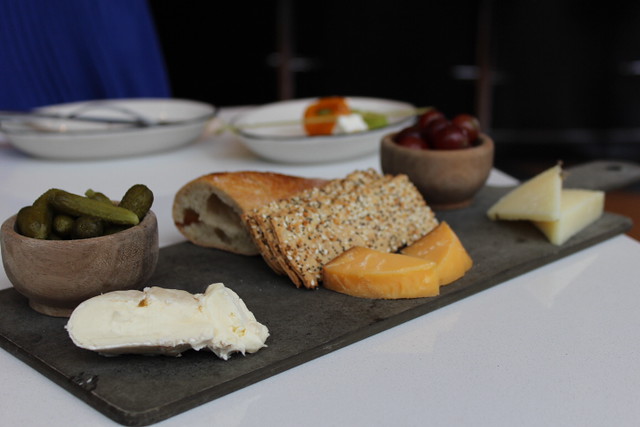 Now, on to the main event: the cheese board. We told the waiter to surprise us and we waited in anticipation. We didn’t order any accompaniments because we wanted to focus just on the cheese. However, I will be back to try the clover honey, Castelvetrano olives, and membrillo. We were treated to the Prince la Fontaine, Beemster XO, and Manchego with rosemary. All of them were delightful and complimented each flavor well. Our favorite was the creamy Prince la Fontaine. You can’t beat a triple cream from France, can you? The cornichons and grapes were lovely additions and provided sweet and savory options. My favorite thing about this board was that they didn’t give us wimpy cheese portions. There’s nothing worse than spending a bundle on a cheese board and being disappointed, or worse, hungry. Kudos to Cheesetique for not being stingy. It’s appreciated. 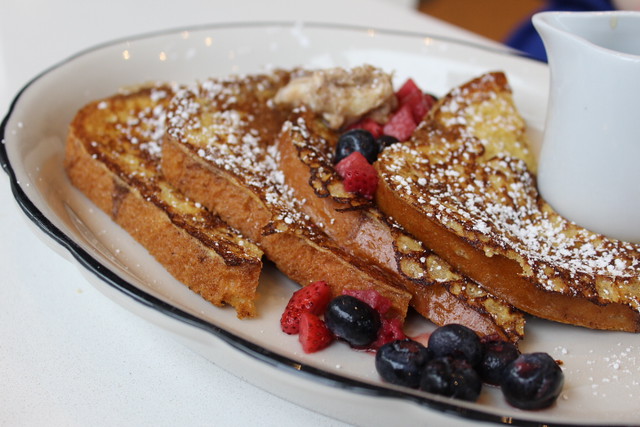 Mom and I finally decided on our entrees and placed our orders with confidence. Lenore went with the Ooh La La French toast and I chose the all-day breakfast sandwich. The French toast was served with cinnamon butter, sweetened berries, and Maple syrup. The cinnamon butter was out of this world! Don’t push this off to the side in an effort to save calories: it’s worth it. The toast was perfectly seasoned and cooked. The berries were just sweet enough and the syrup was warm. This dish has all the makings of a favorite staple. 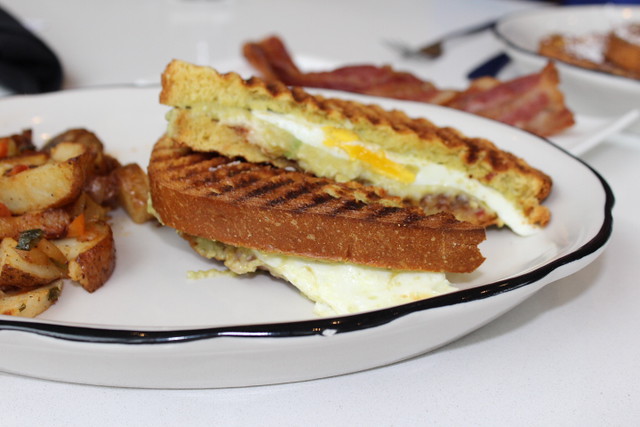 My breakfast sandwich and side of potatoes were also delightful. This sandwich is made with aged cheddar, bacon jam, avocado cream, and runny egg on toasted Brioche. I asked for my eggs over hard, not runny, contrary to the menu. The bread was toasted perfectly, the cheddar wasn’t too overpowering, and the bacon jam and avocado cream blended together beautifully. The side of potatoes were cooked well and flavored with lots of peppers. All in all, this was a hit. 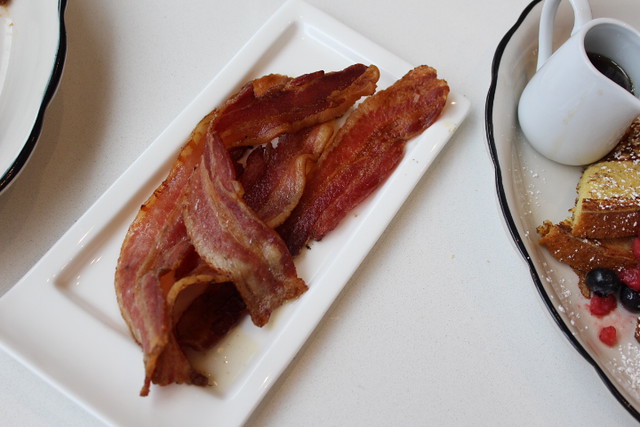 Our side of bacon was also on point. We received four, very generous slices of thick cut bacon. It was crispy with just the right amount of grease.

The only disappointment of the meal was that we were way too full to order the banana split–a waffle sandwich made with fresh chévre and strawberry and banana jam. We cannot wait to come back to try this dish!

The Bitches say: A. We were wowed by every course and experienced great service to boot. This is a spot for you if you like cheese, carbs, and great drinks. Bring anyone from your mom to your significant other.

Brunch is served on Saturdays and Sundays from 10 a.m. until 3 p.m.

One thought on “Cheesetique Ballston Brunch”