It was Saturday morning, and as usual, I was scrambling to make it to brunch on time. We had been invited to try the menu at Bustan, a Mediterranean eatery on the Upper West Side. Emily and Ally reviewed Bustan back in 2014, but we were interested to see if this experience would be any different.

But with all of us coming from various neighborhoods—Midtown, Hell’s Kitchen, and the East Village—getting to the UWS before noon on a Saturday was like asking us to complete a challenge on The Amazing Race. 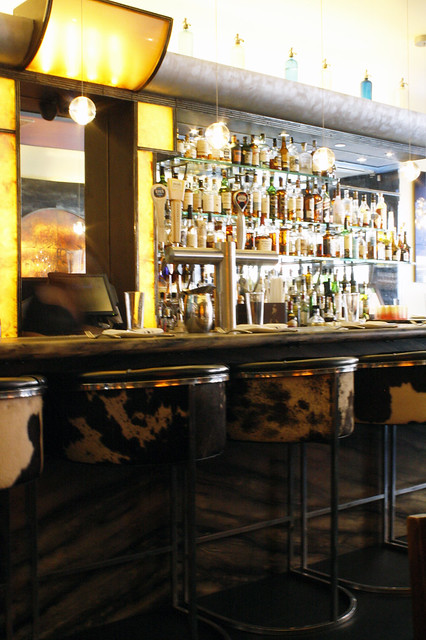 We finally convened at the little restaurant, and were each immediately intrigued by the interesting decor. Contemporary light fixtures dangle from the ceiling, and the L-shaped bar is lined with cowhide bar stools.

While the front portion of the restaurant was well-lit with large windows, the rest of the space suffered from lack of natural light, and even felt a bit diner-esque. I was promptly seated in a corner booth, and greeted with a not-so-hot cup of coffee. Total diner mode. 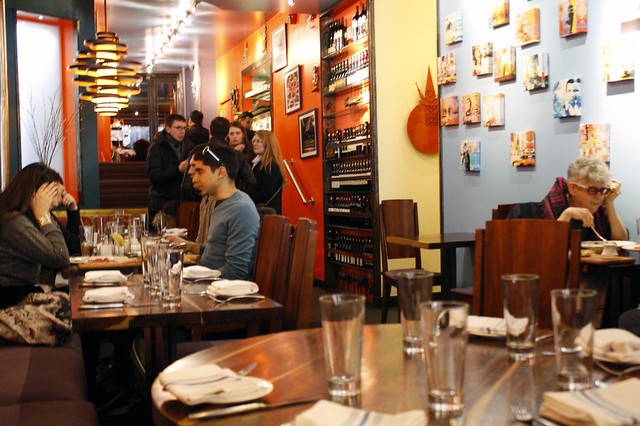 I decided to get a head start on ordering brunch bevvies while I waited for Becca and Sarah to arrive. When I saw the Bustan bloody Mary listed on the cocktail menu, ordering it was a no-brainer for my wait.

The mix tasted and looked homemade; I could see chunks of horseradish and spices floating around in the tomato juice, and the rim of the glass was lined with what appeared to be some sort of Old Bay salt. This cocktail was packed with flavor and did not disappoint! 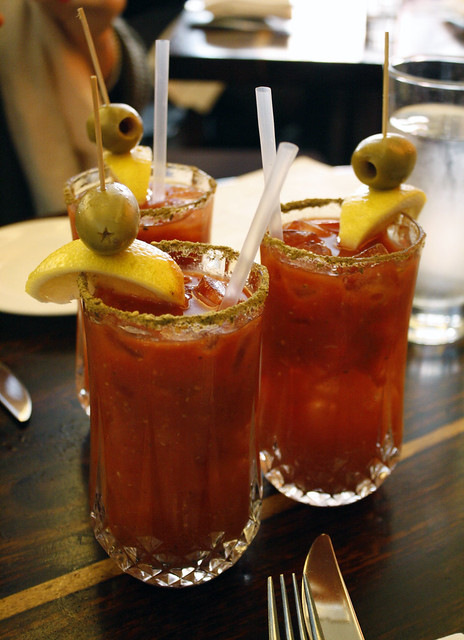 After Becca and Sarah arrived and had their Bloodys in hand, we surveyed the menu. There were a lot of options to choose from. While it may not be considered a typical brunch dish, the charred octopus really stood out to me, and I insisted we order it as an app to share. 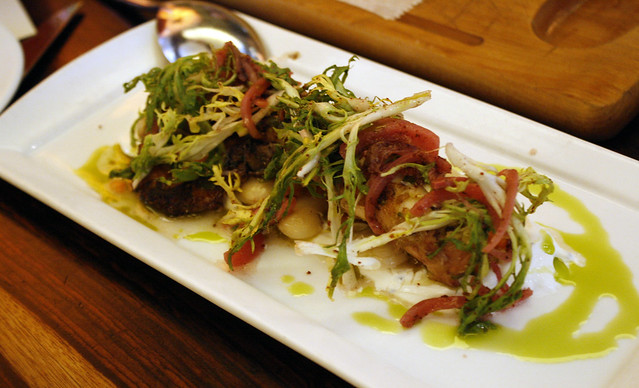 Served with warm white bean masabaha, spiced crushed tomatoes, labane, and topped with frisee, sumac pickled onions, and cilantro oil, this octopus dish was quite tasty. While Becca isn’t generally a huge octopus fan, Sarah and I both remarked how the sea creature was perfectly cooked; not too chewy, and not tough. 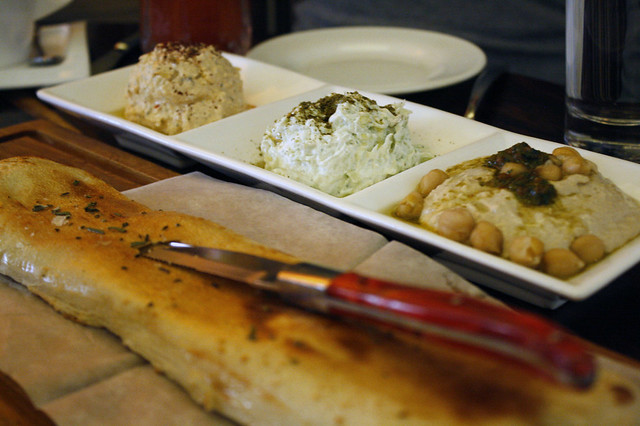 Becca’s favorite appetizer was the mazettim dish, which was beautifully presented. The hummus, tzatziki, and spicy feta were perfect for dipping the hot pita pieces into. And the juxtaposition of the different tastes—from spicy to cool and refreshing to comforting—was perfect to get us started. 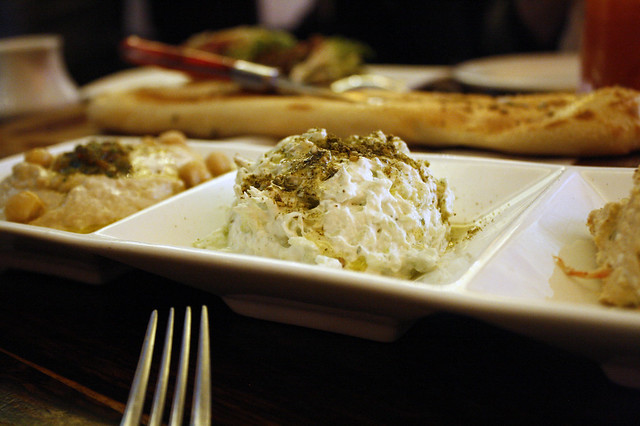 I had to stop myself from polishing off our delicious appetizers, as we still had entrees on their way. I was eager to try the restaurant’s signature Benny, the Bustan Benedict. The poached eggs were served on toasted homemade challah bread, with cooked kale and roasted tomatoes nestled underneath, and avocados and mint yogurt perched on top. 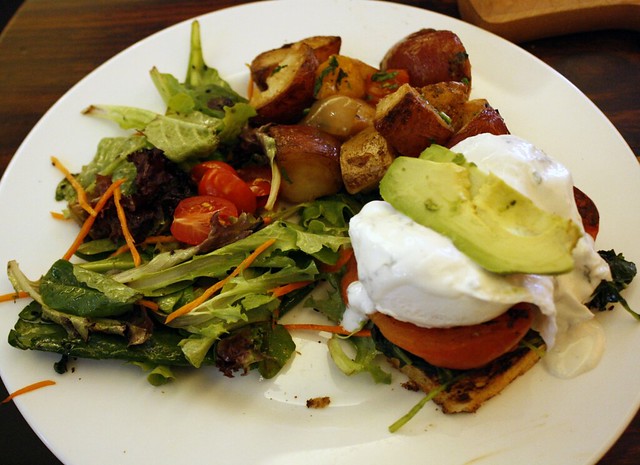 My excitement quickly faded as I cut into my dish. The poached eggs, roasted tomatoes, and kale weren’t served as warm as I’d hoped they’d be, and the dish was severely underseasoned. The ratio of challah bread and avocado to the rest of the dish was on the meager side. The mint yogurt was a nice touch, however, and I appreciated the Turkish twist, rather than using a traditional hollandaise sauce.

Becca loved the idea of the Greek eggs. The dish arrived in a skillet and looked hearty and heavy. The haloumi, roasted tomatoes, and sumac were all baked inside, and when you cut into it, you had a nice layer of taboon baked eggs underneath. However, much like the Bustan Benedict, it was lacking flavor, seasonings, and eventually, its heat. 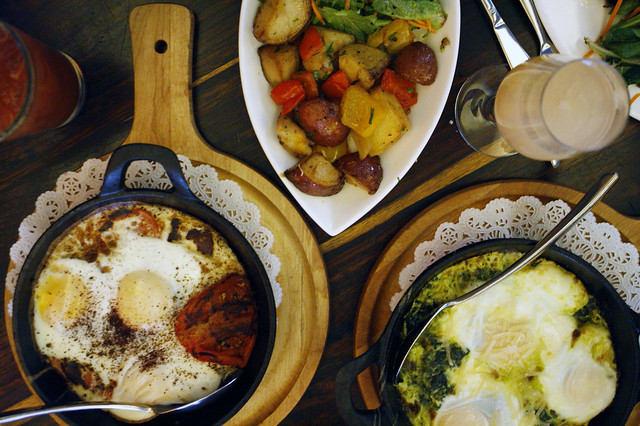 Sarah got the green shakshouka, which has baked eggs with creamed spinach. Instead of being a delicious baked egg dish, it was super watery and runny—the eggs undercooked and everything mushing together. Perhaps people in Greece like their brunch dishes to eventually turn into a mash of egg-soup, but we were rather unappetized.

While we all agreed that our brunch entrees were sub-par, especially when compared to the delicious appetizers, we couldn’t leave without satisfying our sweet tooth. Sarah noticed the Moroccan doughnuts on the dessert menu and the order was placed before we could protest. 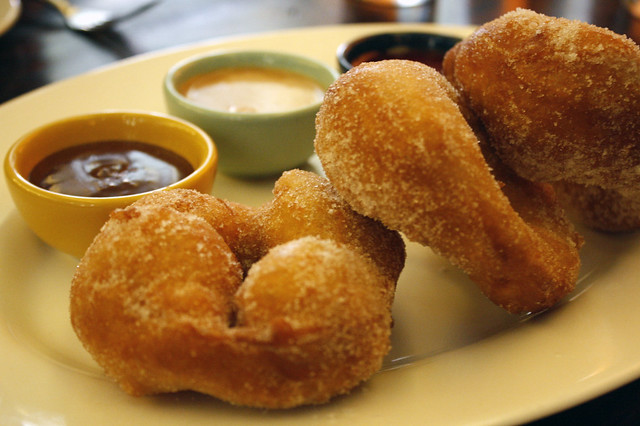 The doughnuts were homemade, and were served piping hot with three sauces. They were perfect for sharing, and satisfied our sweet tooth.

I wasn’t a huge fan of the chocolate or raspberry sauce that accompanied these sweet treats, but the salted caramel sauce was another story. It wasn’t too sweet—it was actually surprisingly light—and offered a hint of saltiness, which paired nicely with the light dusting of sugar on the doughnuts themselves. 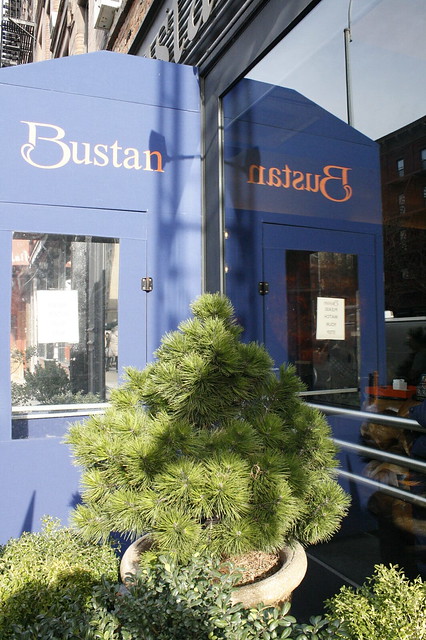 It seems the brunch was book-ended by tremendous appetizers and desserts, but the entrees themselves needed some serious work. (Unless, that is, runny eggs are your thing. We won’t judge you.)

The Bitches say: C+. While the cocktails, appetizers, and desserts at Bustan were enjoyable, the brunch entrees were below average, lacking in flavor, and left us less than impressed.

Bustan serves brunch on Saturdays and Sundays from 10 a.m. until 3 p.m.